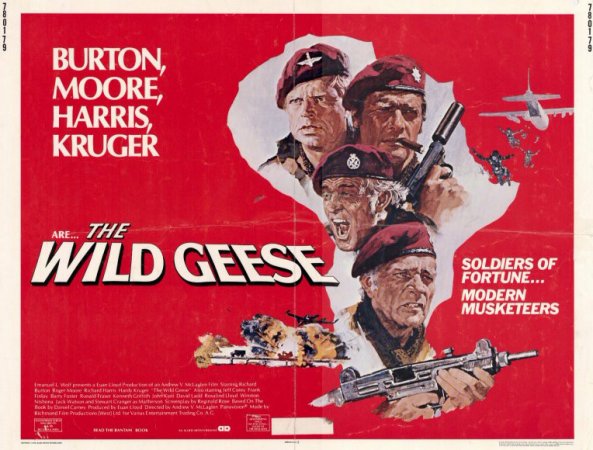 CLICK THE POSTER TO BUY THIS GOOD SHIT FROM WWW.AMAZON.COM!

Here’s the deal: Mercenary Allen Faulkner (Richard Burton) has been called to rescue President Limbani, victim of a coup and kidnapping. Like any good MOAM film assembling the crew is the fun part. Though this film gets goofy as hell in the funnest way possible, when Faulkner is getting the team together, it alternates between tragic (Richard Harris saying goodbye to his son) to hardboiled (Roger Moore making a heroin dealer get high on his own dirty supply). There are others; a sergeant (Jack Watson) a gay medic (Kenneth Griffith) and the red-shirts who never really amount to much so you can be sure they are going to be the early ones to get popped. With 50 hand picked troops, Faulkener and company free Limbani and quickly realize they’ve been double-crossed and are on their own to grab a plane and get the fuck out of dodge.

Though Richard Burton delivers lines like a balled up fist (it’s what you want in your Mercenaries), and Roger Moore plays the grizzled cigar chomping vet well, I think this is Richard Harris’ film. He delivers a surprisingly emotional performance. The scenes between his son and some of the later moments with Burton almost feel like they were working from a different film; though they don’t fit the film tonally I appreciated the pause in a journey full of ridiculously fun moments. This is a film made for weekends when the wife is out. When you want to pop a cold one and watch bullets fly. This flick feels like everything THE EXPENDABLES was trying to be but could never manage. Richard Burton died days before a sequel was to begin filming. Shame, I would’ve gone on another mission with him in a heartbeat. 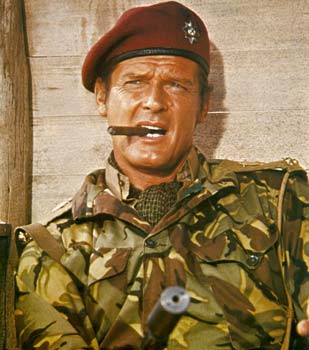