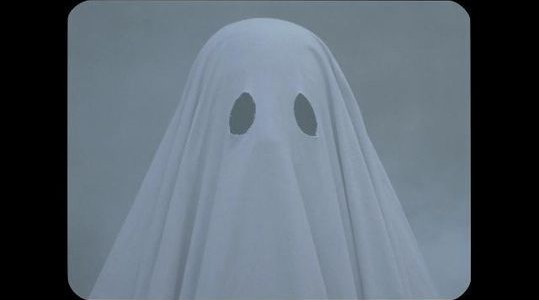 Shortly after the screening of A GHOST STORY, the new film by writer/director David Lowery opening wide this weekend, attended by myself and some of my friends, a conversation emerged about how the film appeared to viewers who’d seen the trailer.  One friend remarked that he didn’t want to see it despite the fact that it was, no doubt, very good, because it looked as though it was a very downbeat film, one that would make you feel worse about your life having experienced it.

That misconception is tough to overcome, knowing the premise of the film.  Heck, it’s tough to overcome during much of the movie itself, as it features multiple moments that are pure emotional devastation, done with a degree of finesse that doesn’t make it seem as though it’s tugging at your feelings for the pure exploitation of it all.  It’s a film that undoubtedly sticks with you long after the credits have rolled, and there’s no doubt that grief is the overarching theme of the moody tale.

These moments, however, are completely necessary for the film to have its impact.  And its impact, overall, is an overwhelmingly comforting and reassuring one.

The premise of A GHOST STORY is almost deceitfully simple.  Introduced to a heterosexual couple (Casey Affleck and Rooney Mara) in a small home, tragedy soon strikes as the male half of the couple is involved in a fatal car accident.  At the morgue, however, the man’s presence rises in the form of a bedsheet ghost, the type that wouldn’t look out of place in a Charlie Brown Halloween special.  The ghost then returns to its home, watching the actions that take place in it, beginning with the grieving process of his other half. 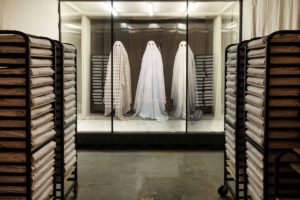 The use of the man’s existence being transformed into the typified version of a bedsheet ghost is a great part of why A GHOST STORY works so well.  In lieu of an actor (and the baggage that comes with everything that is a part of the performer’s identity, be it size, race, gender, or, in the case of Casey Affleck, personal history), the bedsheet ghost, with its blackened eyes in inverted saucers from which any emotion can be read, becomes a character that’s so easy with which to empathize that it becomes increasingly difficult not to place your own emotions into its being.  Even more to the film’s credit is that the ghost never comes off as the caricatured Halloween costume that it references – the movements of the sheet and the way it reacts display an otherworldliness that manages to be simultaneously alien and human.  It’s a perfectly-rendered blank slate, allowing the frequent shifts in time during the course of the narrative to come off as natural, rather than flights of forced whimsy of which a less-convincing specter would have been a part. 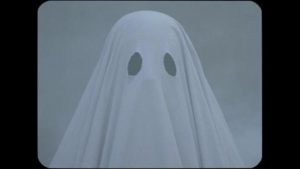 The shooting of the film in a 1.33:1 aspect ratio, with cropped corners making the entire film appear like a family photo of a family you’ve never met, assists with allowing the audience to be a genuine part of the emotional resonance at play as well.  Coupled with the fantastic use of both the score by Daniel Hart and a hypnotic use of silence, A GHOST STORY is a beautifully-rendered mood piece of emotions during the grieving process that audiences will either glom on to almost immediately or reject entirely within the first ten minutes.  (It’s what makes A GHOST STORY rather tough to  recommend to everyone – I could just as easily see a viewer rejecting the premise and deliberate pacing as silly or pretentious if they’re not given to take in the film’s very unique tone.) 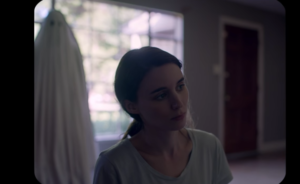 Lowery’s tale, mind you, moves well beyond simply having the ghost observe his girlfriend mourn, but delving too deeply in what follows is best to remain a mystery until you get the chance to see it for yourself.  While a film that appears to be minimal in scope (at least from the outside) may seem like a prospect in which the venue you’d see it in wouldn’t matter, seeing this theatrically, in a darkened theater where the intimacy of the scenes can truly be the focus of your attention, is highly recommended.  It’s the most ambitious wide-release film I’ve seen this year, and that it manages to achieve those ambitions with the appearance of relative ease is awe-inspiring. 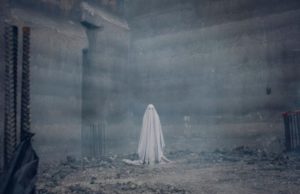 Is it depressing?  Parts of A GHOST STORY are certainly emotionally upsetting, but it’s never without a greater purpose, and in the end, it’s a parable for the triumph of human emotions rather than their defeat.