To quote JERRY MAGUIRE, “We live in a cynical world.” No more is that true than the jaded ranks of genre film lovers, a group that is passionate about their movies but also has seen it all. It takes a lot to penetrate that wall of dubiousness, more than just simple references to past movies or name checking well-known filmmakers in the genre. Too often “clever” films rely on the surface elements to convey these winks without offering up anything new beneath it or saying anything worthy of revisiting the film. Luckily, TRAGEDY GIRLS is not like those other films and is a truly unique and fun ride that subverts slasher film tropes and genre clichés to create something utterly new and wholly entertaining. Director Tyler MacIntyre (who also scripted, along with Chris Lee Hill and Justin Olson) has crafted a brilliant horror-comedy that doesn’t skimp on the gore or scares while delivering hilarious moments; it’s a heightened reality full of knowing nods to past works, but TRAGEDY GIRLS never feels like a cartoon or like it’s above the films it’s referencing. 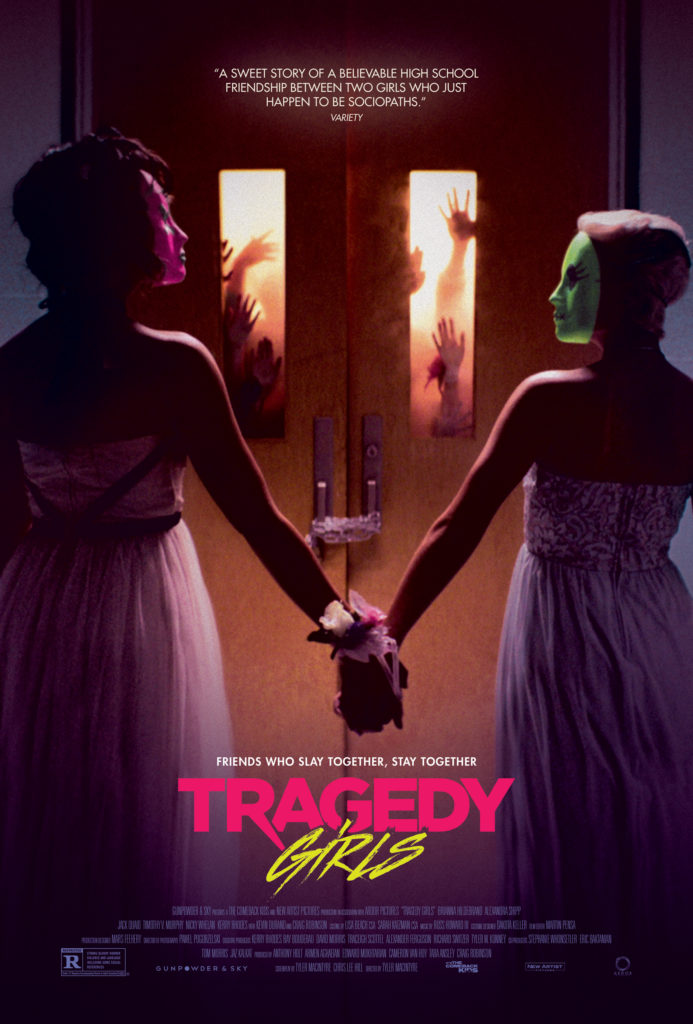 Sadie (Brianna Hildebrand) and McKayla (Alexandra Shipp) are just your average millennial high schoolers who are obsessed with popularity, trending on social media, and visiting horrific carnage upon their fellow students. The film opens with a slasher film staple of a make out scene interrupted by the local madman Lowell (Kevin Durand), but then takes a surprising turn, as it turns out to be a trap for the girls to learn more about how to be better killers from this hulking psychopath. With each death the girls accrue, they use it to put the focus on them, as grieving members of the community, and to raise their social standing in their quiet town and online. But, can the two of them keep it together before their friendship begins to fray? And what happens if Lowell escapes and seeks vengeance on his teenage captors?

TRAGEDY GIRLS is a raucously good time for horror fans and for teenage comedy fans. For those who like the dark comedy of HEATHERS, the wry social commentary of MEAN GIRLS, the insane propulsion of THE FINAL GIRLS, and the insightful observations of BEHIND THE MASK — this is the perfect film. It manages to carefully balance out the escalating insanity of the situation by grounding the film in two incredibly likeable and compelling characters in Sadie and McKayla. Despite their heinous actions and plotting, they are hilarious and wise beyond their years. And the two actresses completely sell them not just as conniving monsters but also as teenage girls who are lost in the midst of (very unique) growing pains. They are able to navigate between the scares, the laughs, and even the emotional depth with dexterity from an excellent script that provides both Hildebrand and Shipp with plenty of room to shine. Sociopathic opportunists have never been so funny or so likeable, and they help maintain the tone and keep audiences engaged throughout the film. 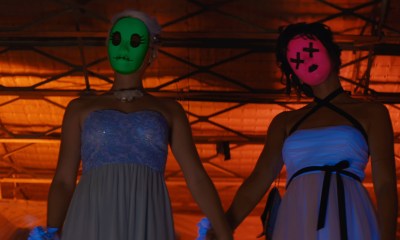 There are also lots of great hilarious moments involving supporting players like Craig Robinson, Josh Hutcherson, and even Durand as the (oddly) put upon stalker of the sleepy little town. MacIntyre knows his teenage films well and is able to use the tropes of both teen romances and ’80s slasher films to subvert expectations and elicit many laughs from the audiences. From the over-lit, soft-focus of Hutcherson (accompanied by sweet, melodic music), to the excellent compilations in the climactic prom scene with off-kilter camera work and inventive masks, it’s a great looking film. MacIntyre also figures out a way to incorporate texting, tweeting, and all other manner of electronic communication into the narrative and screen in a fun way that reminds audiences exactly how much of their lives these women spend on their phones and on social media.

With PATCHWORK and now TRAGEDY GIRLS, filmmaker MacIntyre has announced himself as a presence to watch and a brilliant observer of the horror film genre. He has now delivered two films that subvert overwrought premises into something unique and deftly entertaining. TRAGEDY GIRLS soars through its many excellent (and gory kills), its countless number of punchlines, and brilliant moments of acting to be a film that genre fans should absolutely not miss. It’s easy to be cynical, with the amount of dreck that is unleashed upon the suspicious horror fan community. But TRAGEDY GIRLS proves there is still brilliance to be found in familiar spaces, provided the filmmakers involved have something to say and are talented enough to say it well.