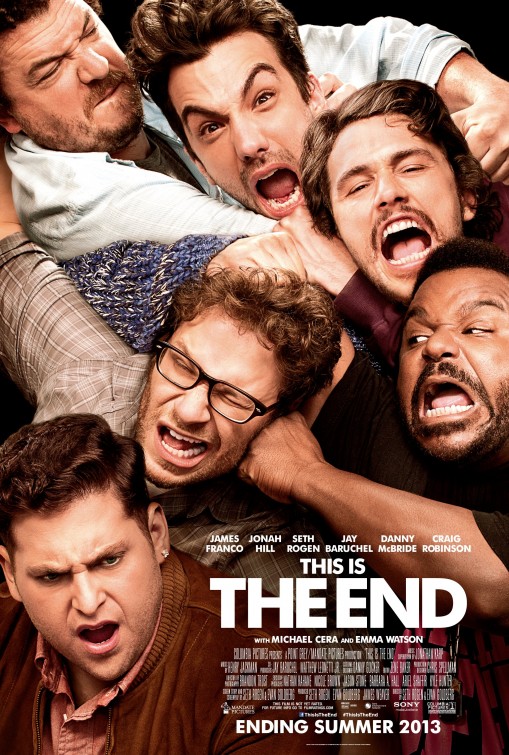 When the dust has settled, it’s very likely that the one person who will be happiest with the existence of THIS IS THE END will be Bill Murray.

While Dan Aykroyd doggedly keeps the idea alive and legions of wrong-headed fans continue to encourage him, while Harold Ramis and Ivan Reitman calmly show varying levels of interest and while Ernie Hudson has amiably stated he’d go along with it if it happened, Bill Murray has stood alone in genial opposition to the idea of a new GHOSTBUSTERS movie.

Now, don’t misunderstand this little run-up here — while I loved THIS IS THE END, I’m not ready to argue that it’s on the unique level of GHOSTBUSTERS in the realm of the great horror-comedies. Nor is it up there with BIG TROUBLE IN LITTLE CHINA or EVIL DEAD 2.

But what THIS IS THE END does do is something I suspect Bill Murray, I mean Bill Murray specifically, has to appreciate way more than any horror-comedy-status dick-measuring: This movie rounds up just about everybody who has been asked by all the lazy journalists and chronic point-missers about starring in a new GHOSTBUSTERS — Seth Rogen, James Franco, Danny McBride, Jonah Hill, Craig Robinson, Paul Rudd, Aziz Ansari, Michael Cera, Jason Segel, Kevin Hart, and Mindy Kaling (I think only Bill Hader and Aubrey Plaza are missing from that usual-suspect wish list) — and puts them all into a movie that has the earth opening up and the skies going black, with mass hysteria and demonic hellhounds bounding around the frame. How could you possibly put any of these actors in a GHOSTBUSTERS 3 without a major feeling of been-there, done-that?

So, sorry, GHOSTBUSTERS 3 enthusiasts, you silly batch of easy-dreamers. We’ll need to grow a new crop of potential stars for your beloved folly. Luckily for me and moreso for Bill Murray, it’ll be a couple years yet before people start clamoring for, say, Lena Dunham or Victoria Justice in a GHOSTBUSTERS movie. Believe me, I’ve been in a room where Bill Murray had to field that GHOSTBUSTERS 3 comment for the 17,000th time.  He’ll take all the relief he can get. 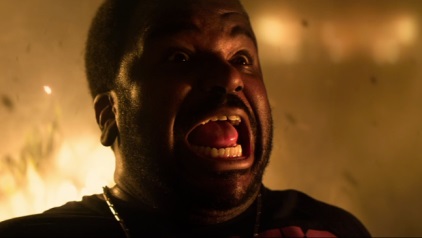 Of course, the fact that I’m even bringing up one of my favorite movies of all time in the context of THIS IS THE END is a massive compliment to co-directors Seth Rogen and Evan Goldberg in the first place.  Again, it’s hardly an apt comparison.  This is very much an LA movie, for one thing.  It couldn’t be more LA.  The basic story finds Jay Baruchel, the wiry, energetic actor from ALMOST FAMOUS, MILLION DOLLAR BABY, TV’s Undeclared and many other things, as he’s arriving at the airport from Canada to be picked up by his much more famous friend, Seth Rogen.  The guys are playing themselves (to some degree anyway), which you probably already know from the poster.  Seth and Jay are hoping to have some quality chillout time, but end up going to a huge party at James Franco’s dead-tech postmodern bullshit house in Hollywood.  Jay doesn’t want to go.  Franco doesn’t remember his name, yet he fawns over Seth, even painting a picture in tribute to him.  Worse, Jonah Hill is there.  It’s unclear at first why Jay hates Jonah so much, since Jonah goes out of his way to act nice to him, but there’s a weirdness to it.  The party is full of people Jay doesn’t know.  Craig Robinson, from The Office and PINEAPPLE EXPRESS is there.  So is Rihanna.  Hey, there’s Emma Watson, from the HARRY POTTER movies.  Paul Rudd shows up late, but at least he brought a nice bottle of wine. 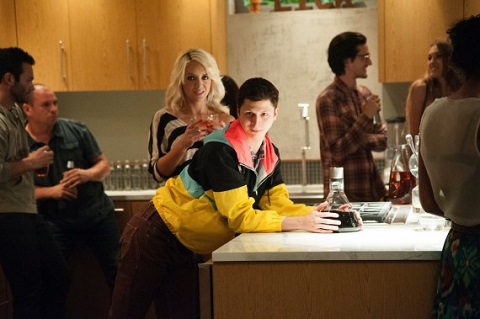 The first major scene theft occurs courtesy of Michael Cera, from Arrested Development, SCOTT PILGRIM VS. THE WORLD, and SUPERBAD.  It’s the first indication that no, none of these actors are exactly playing themselves, unless Michael Cera has been incredible at secrets before now.  I wouldn’t dream of spoiling this joke or any of the other thunderingly hilarious gags that follow, but Cera’s small part in THIS IS THE END is both an image-annihilating gift to him, and a generous lobbed ball that he totally smashes.  This is the kind of movie where a rising tide lifts all boats:  Michael Cera’s awesomeness makes Rihanna seem that much radder, and so on throughout the movie. 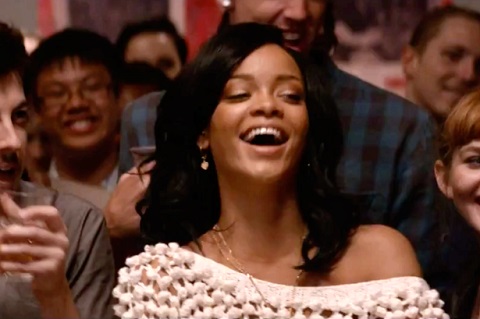 Is it the Hollywood bacchanalia and debauchery that brings on what follows?  Jay, feeling out of place, heads off to buy some smokes.  Seth tags along dutifully.  Jay wants to bail but Seth wants Jay to get to know his Hollywood buddies.  It’s the same kind of male-friendship push-pull that Goldberg and Rogen wrote about in SUPERBAD, until it isn’t.  Earthquakes rend Melrose Avenue.  Blue light fires down from the sky and sucks up half the bystanders nearby.  Those less lucky are crushed by debris.  Jay and Seth high-tail it back to Franco’s house for refuge.  Then the ground opens up.  A fiery hellmouth starts swallowing up Team Apatow and all their acquaintances.  Kevin Hart is toast.  Aziz is a goner.  I’m still not positive what happens to poor Martin Starr, who gets scarcely a walk-on before the apocalypse descends. 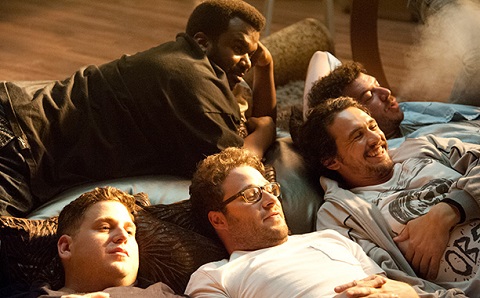 The survivors hole up inside Franco’s fortified mansion, positive their celebrity will shine like a beacon and draw the help they need.  I don’t think any of this has been classifiable as spoilerage – you’ve seen the poster.  We’re left with Jay, Seth, Franco, Jonah, and Craig.  And the outlier, Danny McBride, the Waingro of the piece, a shit-stirring virus with monster swag.  I’m not sure there’s a more enjoyably anarchic comic presence on the planet right now (the phrase “national treasure” did cross my mind more than once), although according to THIS IS THE END, McBride is not the guy you’d want to be trapped inside a post-apocalyptic safehouse alongside.  There are differences of opinion concerning hygiene.

I’m sure there will be critics of THIS IS THE END, somehow, but what they will fail to notice is the incredibly canny understanding of comic persona that Rogen and Goldberg bring to the dialogue.  As an actor, Rogen is so distinctive that his character is mainly a self-effacing spin on his already recognizable screen presence.  Baruchel is lesser known (although he was terrific in GOON, the 2012 hockey movie he co-wrote with Goldberg), so he serves as the audience surrogate into this creepy young-Hollywood dystopia, and the straight man to most of the others.  I think THIS IS THE END would work regardless of one’s familiarity with its stars, but I personally happen to have seen nearly everything most of them have done to date, so I enjoyed the street-art defacement of their most routine quirks. 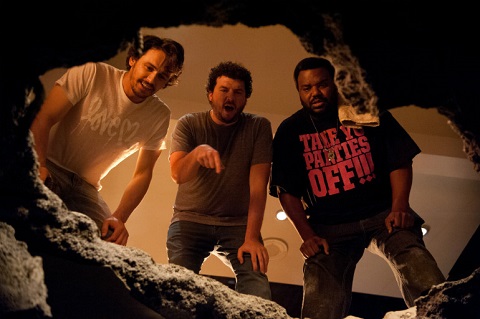 Sidebar:  You can read more of my thoughts on these guys if you want.  Clearly I came into this new one already a fan. 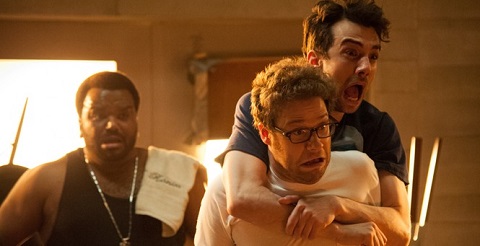 Being locked in a house with these guys is movie-Jay’s waking nightmare.  Franco emerges as the de facto leader, only he’s the most blatantly selfish and self-centered.  Seth is the same guy he’s been all along, only more comically spineless.  Jonah’s nice-guy façade quickly fades away, creepily.  Craig comes off relatively well, but Danny is like a feral mountain lion.  He’s basically playing Kenny Powers, his EASTBOUND & DOWN character, but taken to its logical and most horrifying end.  (Again, no spoilers.)  I’m absolutely positive that none of these guys are like this in real life, but the inspired script and performances provide a tense frisson between that certainty and that vague, mewling doubt at the back of your mind.  They’re not like this.  I’m not like this.  But would they act this way at the end of the world?  Would I?  I like a mass-appeal comedy that raises the questions. 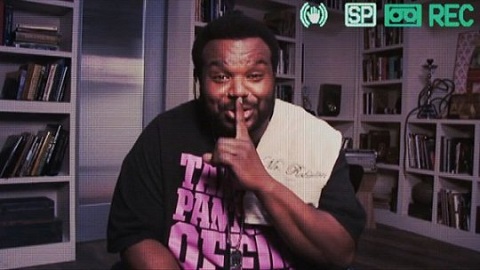 Everyone loves a good apocalypse story because we all like to think we would be the heroes.  Anyone who watches DAWN OF THE DEAD expects they’d be most like Ken Foree’s character, forethinking and unflappable.  Nobody wants to be Fran, all emotional about everything, or Roger, fatally impetuous, or Flyboy, who has some valuable talents but ultimately fucks up.  THIS IS THE END portrays some of today’s most popular younger stars in the face of cataclysm as craven, quivering messes.  Rogen tried the hero thing, and people gave him shit for it.  So he came up with something even funnier.

I laughed at this movie long, black, and hard, like Satan’s dick.  It’d be hard for me personally to say it’s the funniest movie I saw all summer, since I recently watched 1997’s LITTLE BIGFOOT (don’t ask) and 1984’s NINJA 3: THE DOMINATION (review forthcoming).  But it would not be too much of a stretch at all for me to put THIS IS THE END in the running for the funniest movie of 2013.  It isn’t a perfect film – I think the friendship plotline is pushed a little too conspicuously, I think the idea of a bunch of Jews and half-Jews (and Craig Robinson) making a movie using so much Christian mythology is fascinating but under-explored, and the movie definitely ends one scene too late (and I don’t say that only because I don’t have any enthusiasm for the final cameo) – but then again, it probably never needed to be a perfect film. Horror needs to be scary.  Even more importantly, comedy needs to be funny.  Done, and motherfucking done, son.  Seth & Evan:  More please.  Only not a sequel.  I don’t dig on those.  Neither does Bill Murray.

Get a double dose of A-Bomb and follow his blog here.