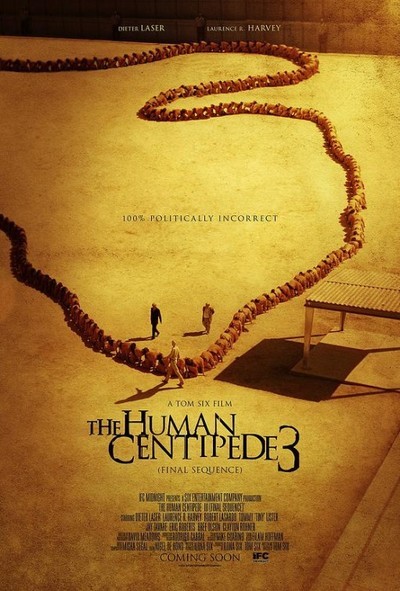 I am a huge fan of the HUMAN CENTIPEDE trilogy. Usually when I have high expectations for a film and I see it in the theater, I am severely let down. Thank goodness, that was not the case with THE HUMAN CENTIPEDE III (FINAL SEQUENCE).

We’ve seen Germany, we’ve seen England, and now the Human Centipede has squirmed its way over to the good ole’ U.S. of A, and in a prison, no less. This time around, we find the two actors who played the villains in the two previous HUMAN CENTIPEDE films (Dieter Laser and Laurence Harvey) playing the lead roles here.

Dieter as the torturous, proud to be American, commie-hating prison warden is amazing. With his thick German accent, what you can actually understand coming out of his mouth is a long litany of vile and hilarious verbal degradation. Harvey, playing Dwight Butler, the prison accountant, and the sniveling sidekick to the warden, was simply perfect. Both leads over-play their roles and chew up the scenery.

The warden is an evil man, but in his mind he is just trying to do the best he can to keep the out-of-control prisoners in line. Well, you know besides torturing the inmates, sexually assaulting his secretary, and verbally and physically abusing all those around him, he’s a swell guy. That, and the heat is driving him insane!

The warden tries breaking the limb of an inmate who assaults a prison guard. That doesn’t seem to break the prisoner’s spirit. Then, another inmate prank-calls the warden with threats. The warden finds out who made the call, has him strapped to a table, and pours multiple buckets of boiling water on the inmate’s face. Badly burned, the inmate is still out of control. Running out of reasonable options, the warden decides to castrate the most outspoken of the prisoners (in a scene that is graphic and awesome). To no avail, the prisoner is just as wild and out of control as ever.

All the while, the prison’s accountant, Dwight Butler, is trying to get the warden to check out the first two HUMAN CENTIPEDE films, as a solution to all their problems, and repeatedly, the warden dismisses poor Dwight, calling the movies “B-movie shit shows!”

When the warden has finally run out of all other possibilities, he decides to listen to Dwight’s idea. It makes sense, and he’d be saving tax payers billions! He’ll be an American hero! Of course, since the prison doctor doesn’t have his license, he agrees to do whatever the warden says, and following a meeting with the director of the HUMAN CENTIPEDE movies, Tom Six (as played by himself), they start off right away creating the first Human Prison Centipede!

THE HUMAN CENTIPEDE III (FINAL SEQUENCE)was a laugh riot from beginning to end! No, seriously, it was. The all the actors really understood the movie that they were making. Tons of over-acting and campiness. It was great!  I love self-realization, and I’ve probably never seen any film quite as meta as THE HUMAN CENTIPEDE III (FINAL SEQUENCE). Besides referencing the first two films, and continuously calling them crap, which I thought was hilarious, to have the director of the movie make an appearance in the movie is pure gold! Knowing that Tom Six also wrote the script, having the warden’s secretary tell Tom Six that he looked even more handsome in person, had me laughing so hard.

THE HUMAN CENTIPEDE (FIRST SEQUENCE) was a classic mad scientist movie. It was FRANKENSTEIN, it was RE-ANIMATOR, and it set the bar pretty high. THE HUMAN CENTIPEDE (FULL SEQUENCE) was a dirty foreign arthouse film that you would get a bootleg of a bootleg from your older cousin in college, and he got it from some dude in Japan. It was similar to the Jörg Buttgereit’ s classic NEKROMANTIK.

FINAL SEQUENCE is pure 1980s filth! It’s like something you’d see at a seedy theater on the bad side of town, or something you’d find in the horror section in your local video store circa mid-80s. It’s as if John Waters filmed a movie for Troma in say 1984. What I’m trying to say is, all these films are great and completely different, and you can’t really compare them to each other.

If you have a sick sense of humor and aren’t offended very easily, then you will love THE HUMAN CENTIPEDE III (FINAL SEQUENCE) just as much as I did! Great gore, great laughs, and great fun! HIGHLY RECOMMENDED!!!