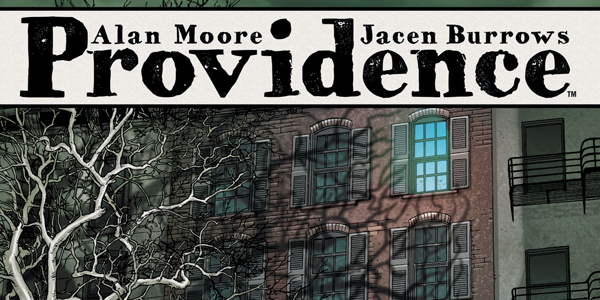 IT’S THE THIRD EPISODE OF OUR NEWEST FEATURE AT DAILY GRINDHOUSE!

OUR COMIC BOOK COLUMN IS BACK! 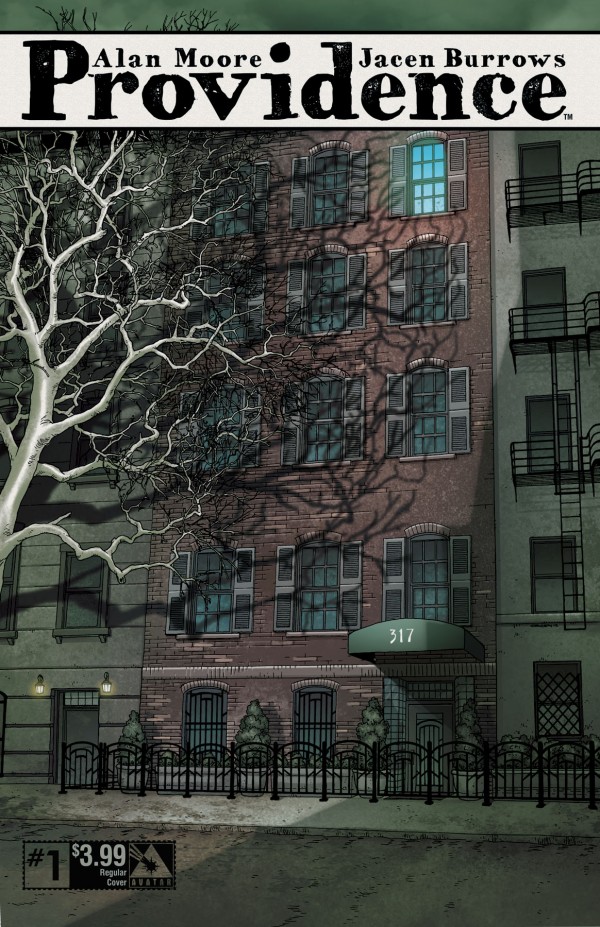 Fellow comics readers — do you remember that feeling of being in on the ground floor of something not just great, but truly monumental? Folks who were around for Fantastic Four #1 and the dawn of the so-called “Marvel Age Of Comics” talk about it a lot. As do those who picked up Jack Kirby’s New Gods #1 on the newsstands (even though, technically speaking, the Fourth World mythos had already been introduced to the world in the pages of Superman’s Pal, Jimmy Olsen). Members of my generation felt it when we grabbed book one of Frank Miller’s The Dark Knight Returns and, just a handful of months later, Watchmen #1 , hot off the comic store shelves in the annus mirabilis of 1986.

It’s been a long time, hasn’t it? But I promise you this much: Here,  in 2015, it’s happening again — finally. I just hope somebody’s paying attention. 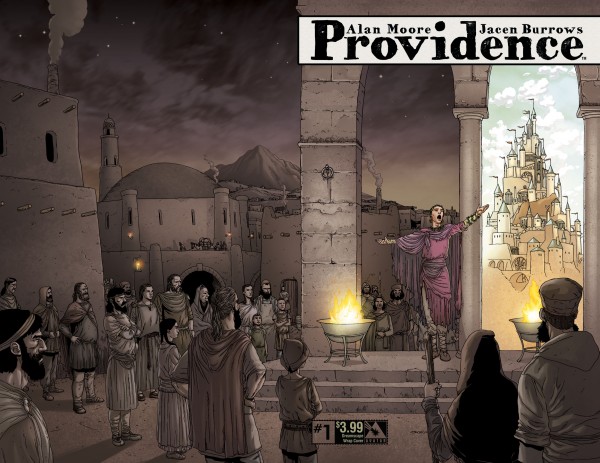 For some time now, Alan Moore has been piecing together a cycle of stories based around themes and concepts from the works of H.P. Lovecraft that’s been flying well beneath the radar for a number of reasons — chief among them being, most likely, that they’re being put out by small independent publisher Avatar Press. First came The Courtyard, a one-shot based on Moore’s short prose story of the same name that was adapted into comics form by writer Antony Johnston and artist Jacen Burrows. This was followed up a few years later with The Neonomicon, a four-part mini-series directly from the pen of Moore himself with Burrows returning to handle the artistic reigns. By this point a small “buzz” was starting to form around the work, but Moore lost a lot of readers along the way due to the brutal, uncompromising, and frankly ugly nature of the story — which included, among other things, a protracted and decidedly disturbing rape sequence that’s as hard to stomach on its tenth reading as it is on its first.

Which is kind of the point, I would suppose, in the same way that the lengthy and uncomfortable violation of the heroine in I SPIT ON YOUR GRAVE absolutely should be difficult to sit through because without it, the third act of the film — centering on her revenge — would lose most of its power. You’re more likely to stick  through a film that you’ve already bought a ticket for, though, than you are to keep picking up a serialized comic book story that demands a fresh four bucks from you every month, and so it came to pass that a good many people opted out of The Neonomicon before Moore and Burrows had finished telling their tale. For my part, I did ride it out, but I’d only give it a very qualified recommendation — if you appreciate being challenged and you have a strong stomach, then you won’t exactly “enjoy” the series, but you certainly will appreciate its narrative power. For what it’s worth, even Moore himself has admitted that he probably went too far with it and that he wasn’t exactly in the most positive space mentally and emotionally when he wrote it.

But hey, it’s a new day, and what better way for Moore to wrap up his loose “Lovecraft cycle” than with a new 12-part series, Providence, that promises to be his most ambitious work in the comics medium in far too long? Avatar’s own extended promotional blurb for the series calls it “the Watchmen of horror,” and while I would contend that a good number of Moore’s post-Watchmen projects actually surpass, in terms of their scope, themes, and even ambition,  the book for which both he and Dave Gibbons will probably always be known best (Promethea, anyone? The League Of Extraordinary Gentlemen? From Hell? The almost criminally-underappreciated Supreme?) , the fact is that none of those admittedly remarkable projects arrived with the immediate, transformational “thud” that Watchmen  itself did. None stated their intentions as immediately or staked out their turf with the same level of bravado. I’d certainly argue that some — maybe even all — were better than Watchmen by the time they were finished, but none of them were as hell-bent on pushing the comics form itself into a new future, given that they were all a by-product of (or, in the case of Supreme, a direct answer to) the new, more “grown-up” landscape that Watchmen had left in its wake.

Thirty years later, I’d say we’re more than ready for the next leap forward, wouldn’t you? Providence seems to be all about propelling comics in general — and horror comics in particular — into a more considered, literary direction, and while Moore has certainly been doing his level best on that front for some time, the self-contained nature of this narrative (more on that in a moment), as well as its promise to be on time month in and month out (given that it’s already scripted and drawn in its entirety) should lend itself well to the task. There’s a palpable sense of magnitude apparent from panel one, page one here that you just can’t fake. Providence is all about setting the bar for other works, and other creators, to measure up to.

Which might seem funny, I suppose, given that most of the first issue is taken up with people just sitting around and talking. Our protagonist, newspaperman Robert Black, hangs around in the office of his publisher one summer day in 1919 trying to come up with ideas for a space-filler story. Having hit (with some assistance from his colleagues) on an idea, he then proceeds to interview the subject for the piece, one Dr. Alvarez, at his apartment. Then he goes back to work.

It all sounds terribly exciting, doesn’t it? Of course not — but Providence is all about what’s going on beneath the surface. Dr. Alvaraez even mentions this explicitly, talking about how all of us have so many secrets that there is an entire “secret nation” that exists just beneath the surface of the one we see, and that we actually live in both. It’s a staggeringly powerful idea, and undeniably true — it’s also one hell of an effective story “hook.” 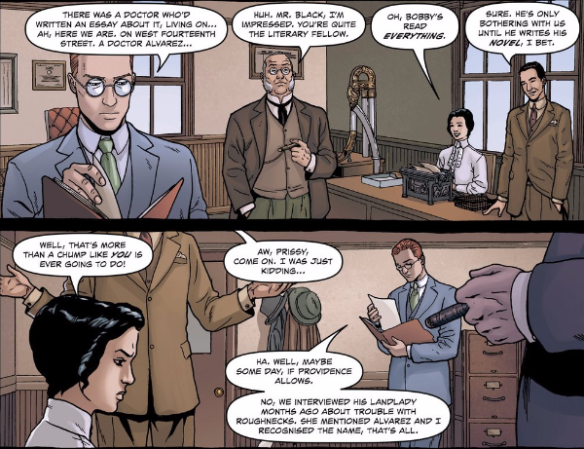 Time for some props to the artist. Jacen Burrows has spent the past two years illustrating this comic, and it shows in every furrowed brow, wrinkle in a character’s suit, and line in their hand. This is amazingly, almost agonizingly, detailed artwork, and looking at reference photos of 1919 New York City in comparison to his panels, you see that he hasn’t missed a beat. To his credit, though, there’s none of the lifelessness here that accompanies other such heavily-referenced work done by less skilled hands. Yes, his art here is accurate and clinical, but it also has a tremendous amount of personality to it and is in no way lifeless or cold. 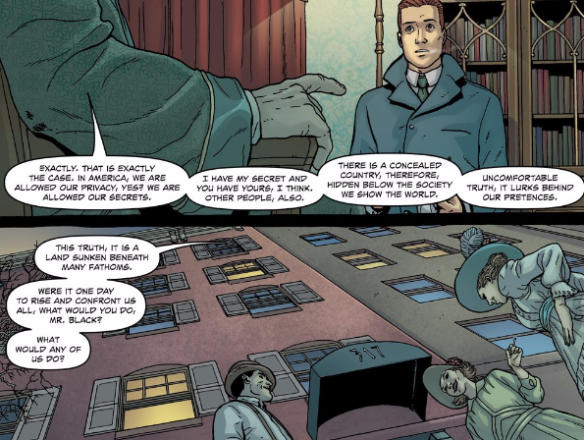 What is cold, though — damn cold, in fact! — is Dr. Alvarez’s apartment (as seen above). The good doctor suffers from some sort of unspecified medical ailment that requires him to remain in very frigid temperatures at all times — temperatures achieved by an ammonia-based cooling system for his home that’s probably not unlike heavy-grade industrial refrigeration. Welcome to one of many historical “wrinkles” that clues us in to the fact that this is not 1919 America as we know it. The “suicide parlor,” where people who wish to exit this world in a safe, clean, relaxed manner (a terrific idea, by the way) is another hint.

And that brings us back to the “self-contained” nature of the story here. Avatar is quick to point out that while Providence functions as “both sequel and prequel” to The Courtyard and The Neonomicon (therefore pulling “double-duty” already), it’s also completely hermetically sealed and operates by rules, logic, and premises that are entirely its own. If you’ve read those other two comics, you’ll invariably get more out of this one, but it’s not necessary in the least to have done so.

Likewise, if you’ve read a fair amount of Lovecraft, you’re sure to have a richer, more meaningful reading experience here, but it’s in no way a prerequisite to have read any to fully understand what’s happening in these pages. Ditto for the work of Robert W. Chambers, whose seminal story collection The King In Yellow — massively referenced in this first issue — was a tremendous influence on Lovecraft and provided the starting point for the entire “Yellow Mythos” that a number of writers have added to over the years. It was Chambers, in fact, who first posited the “suicide parlor” or “exit garden” idea, and so it’s clear that the world of Providence is one in which the author’s ideas are not only more well-known than they are in our “real” world, but have even — at least in some instances — come to pass.

It’s entirely likely that the comparison to Watchmen the publisher makes is based on this detailed, multi-textual approach that Moore is taking with  his story in Providence. Every time you re-read that classic work of super-hero deconstruction, you’re virtually guaranteed to notice several things you didn’t previously. It reveals more the deeper you go into it, and the same is undoubtedly true of the first issue here. It keeps plenty of secrets, to be sure — the identity of Black’s former lover being the biggest — but upon subsequent re-explorations, you come to see that they’re all deliciously hidden in plain view. A fully-annotated version of this book would be welcome at some point — but not just yet. As with any comic where Moore is firing on all cylinders — as certainly seems to be the case here — piecing together things for yourself is a big part of the fun, and at times can even be flat-out revelatory.

It seems to me that’s where Moore still leaves both his contemporaries, as well as those who have followed in his stead, waaaaayyyy back in the dust. Rather than just telling a story, he fully engages the reader as a near-equal partner in the process along with himself and the artist. If you’re willing to put in the work, you’re going to arrive at so many possible readings of the text that whatever you up believing the “truth” of  it to be will be a matter of completely individual interpretation. While most comics, films, novels, etc. are able to content themselves merely with telling a good — or even passable — story, Moore has always aimed for something greater; to use his stories as a map for helping you find your own. I can’t wait to see where Providence takes me — and, perhaps even more importantly, where I  take it. 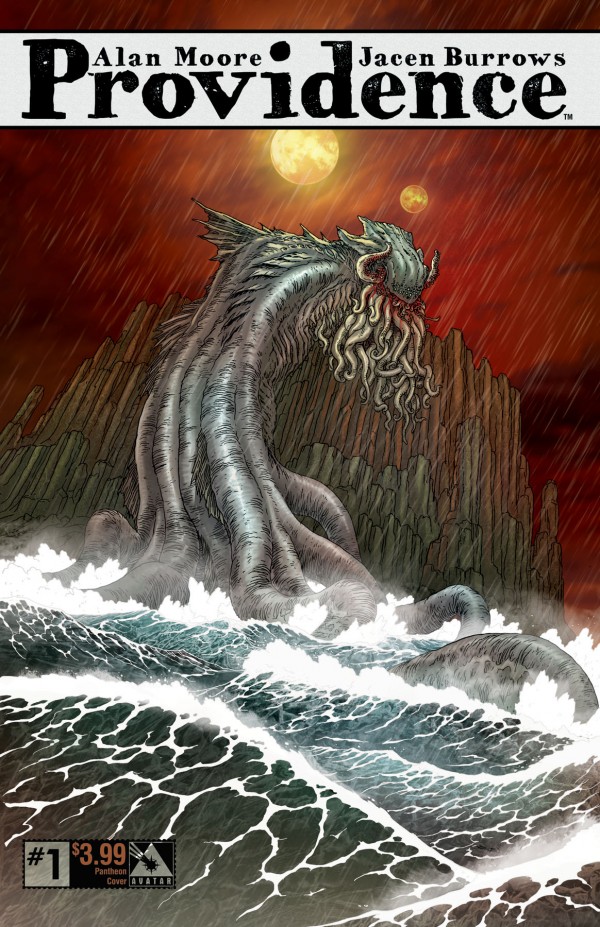