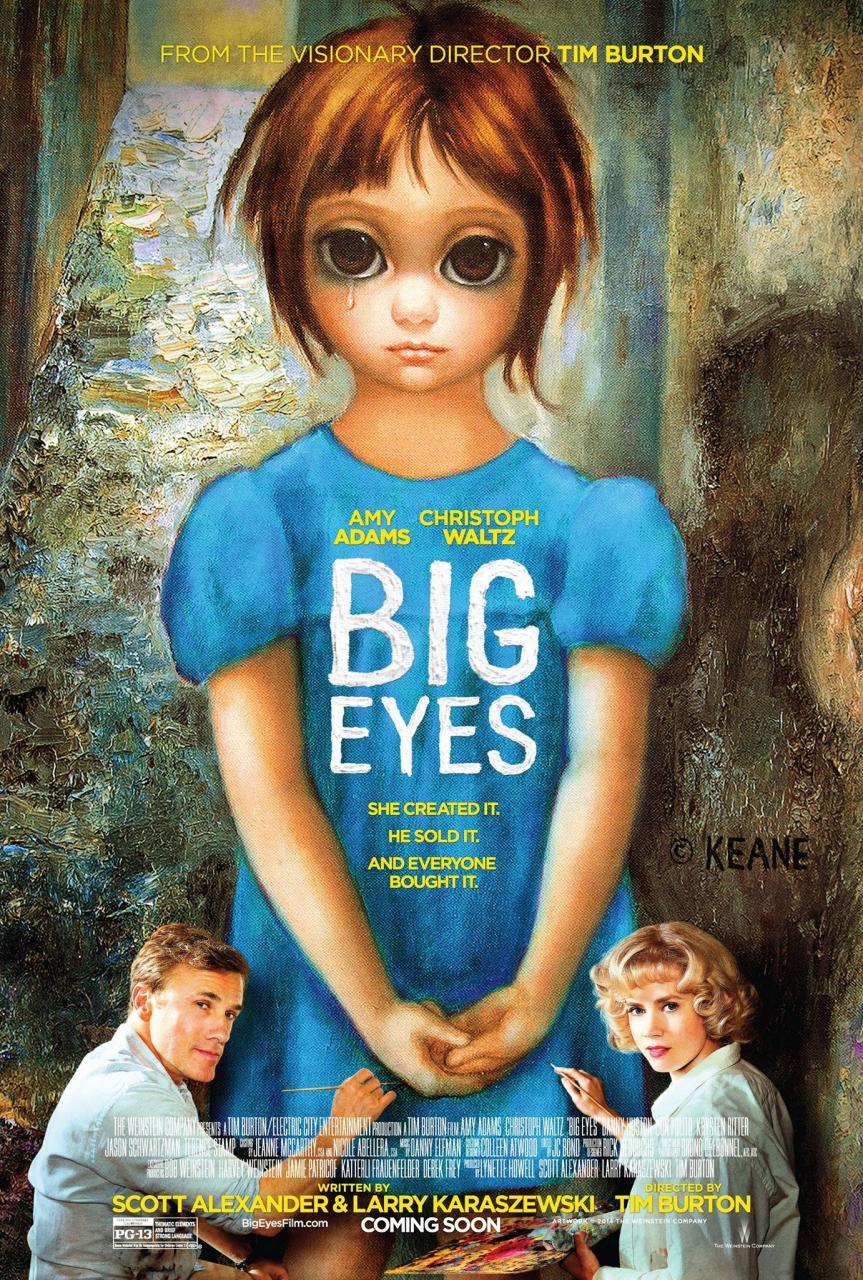 I’ve got two different theories when it comes to Tim Burton — he’s either at his best when working on movies with the word “big” in their titles (think PEE WEE’S BIG ADVENTURE, BIG FISH, or his latest, BIG EYES), or when he’s  directing scripts that the screenwriting team of Scott Alexander and Larry Karaszeswski have mined from the treasure trove of interesting stuff put out by legendary subversive publishers Feral House (think ED WOOD, which was adapted from Rudolph Grey’s NIGHTMARE OF ECSTASY or, again, BIG EYES, which leans pretty heavily on Adam Parfrey and Cletus Nelson’s recent CITIZEN KEANE).

The nice thing about these theories is that they’re not really “competing” so much as working together — both can, and probably are, true. They’re a harmonious pair.

Which is more than you can say, of course, for Margaret and Walter Keane, the couple behind the famous “big eyed waif” paintings that took American pop culture by storm for the better part of two decades beginning in the late 1950s. The art world may still be trying to figure out exactly what it thinks about  so-called “big eye paintings” all these years later — the establishment at the time certainly thought they were pure shit, while various underground and populist quarters have been busily trying to resuscitate their reputation for a variety of reasons ever since — but as far the American legal system is concerned, one thing is certain : each and every one of them was the work of Margaret Keane, and not her husband.

Yup, friends, we’ve got an “art fraud” story here — arguably the single-greatest one ever committed, for while even their fiercest defenders would never go so far as to claim that the Keane paintings are masterpieces, they certainly generated a shit-ton of cash, and were once at least every bit as ubiquitous in American households as velvet Elvis paintings or that picture of the dogs playing poker. They were everywhere, and the Keanes were at the epicenter of multi-million-dollar art empire. When the couple split in 1965, then, there was a lot on the line when the question of who did what came up, and the verdict in favor of Margaret was, and remains, a very big deal.

In light of such high stakes, Burton’s decision to make his biopic on the “two” artists such a personal one is perhaps surprising, but it proves to be something of a stroke of genius, because the hows and whys of such a massive swindle can only be understood by delving into the minds and hearts of the people who perpetrated it. Sure, Alexander and Karaszewski take a number of liberties with the facts here — as they did with ED WOOD — but overall they get the gist of things right, and the performances by Christoph Waltz as Walter and, especially, Amy Adams (who’s doing a lot better work these days now that she seems to have given up her grueling pace of a year or two back when she was apparently determined to be in every single flick being made) are both believable and agonizingly human. In the end it’s Margaret’s story, though (as was the artwork), and Burton manages to frame it perfectly by rooting it in the “women-are-second-class-citizens”  cultural context of its time in a way that overly-“hip” garbage like Mad Men only wishes it could pull off.

Frankly, I’m not even sure that a divorced single mother in the late 1950s, when presented with the extraordinary set of circumstances the at-the-time Mrs. Keane found herself in, would have had any other choice but to play along with her old man’s charade, but I guess it’s worth noting for the sake of fairness that in his later years — something Alexander and Karaszewski bio-scripts are notorious for omitting — Walter still maintained that the big eye paintings were his creation, even though he not only never produced one of them on his own, he never painted anything else either. Don’t ask me how or why folks ever took his word for anything, but apparently at least a few gullible souls did. All that aside, though, where BIG EYES comes up biggest is in the successful “scaling-down” of its proceedings to a level pretty much anyone can relate to, which not only gives the story a lot of heart, but helps it eschew the easy trap too many filmmakers fall into of becoming drunk on the perceived importance of their work. Yeah, the Keanes pulled off an amazingly huge hustle and kept it going for years, but in the end, these are still just kitsch paintings, and while kitsch is cool and all (at least sometimes), and certainly serves a noble purpose in giving a big, fat middle finger to the pretentious assholes of the artistic establishment, it’s still just —- well, it is what it is, right?

In the final analysis, maybe Burton was the perfect choice for director here because his own work succeeds in the same way that big eye paintings did — just as Margaret Keane was able to use her art to communicate something about the souls of suffering innocent children to the masses of the time in a way that didn’t feel at all alienating or holier-than-thou, our guy Tim has managed to build a staggeringly successful career for himself by packaging images and ideas once thought to be too dark, macabre, or unsettling in a way that the masses of today find to be a bit of harmlessly eccentric fun — as a result, they flock to see his films (well, most of them, at any rate — let’s not forget he’s had a few high-profile flops over the years) in droves, and while BIG EYES might be miles away from his typical blockbuster fare,  he captures the beating heart of his characters, and their story,  in a way that’s positively uncanny,  and the end result is his strongest effort in many years.