She has an ass that’s just big enough for

Sybil Danning has one of those classic bodies you don’t see anymore. It pinches in at the waist from wearing those high stockings for too many years, big natural breasts you secretly (or in my case openly) yearn to hold, and she’s got cheeks that look like they were carved from marble by an Italian master. Speaking of cheeks, she has an ass that is just big enough for two good handfuls. She’s the kind of woman you’d wish to see naked and thankfully for all of us, she was more than willing to oblige.

In They’re Playing with Fire Danning plays college professor/yacht enthusiast/student sexer Diane. Diane’s looking for a patsy to help her and her drunken louse of a husband, Michael, scare his mother and aunt into moving into a old folks home. To this end she recruits (read: fucks) Jay, her student and winner of the Tom Cruise with down syndrome look-a-like contest. Jay’s an imbecile and although apprehensive at first, he eventually relents and sneaks into the old nellie’s house where he is promptly shot at because these crazy old bitches be CRAZY! Here’s where things turn sinister because there’s someone ELSE hiding in the house who kills off grandma and auntie bitchenstein. Oh the intrigue!

Jay is, of course, blamed for the disappearance of the elderly ladies and everyone starts getting all paranoid. At the same time that HOMEWRECKER Diane starts to fall for Jay. She must have a thing for guys with only two facial expressions, paranoid and shit eating grin! The film turns into a bit of a half assed whodunit at this point because no one knows what’s happening and no one is considering the idea of an outside influence. I mean, couldn’t it have been the gardener with all his pruning equipment? Perhaps the disgruntled maid who drinks on the job? Maybe it was one of the Animal House Reject college students angry with Jay ditching them to spend time with his new girlfriend/teacher.

The grandma and aunt aren’t the only people who make the mistake of being in the wrong place at the wrong time. The wrong place being the grandma’s mansion and the wrong time being WHENEVER! I’ve speculated to the actual sanity level of women, but the girl who thinks she’s Jay’s girlfriend really lowers the bar for crazy chicks. They made out once and she’s all up in his shit! She tracks Jay down to the mansion and is unceremoniously beaten to death with a baseball bat by a guy dressed as Santa Claus! All sorts of questions arise when it’s finally realized that none of these three dingbats killed anyone. So the question remains…WHO DID IT? And WHY?! 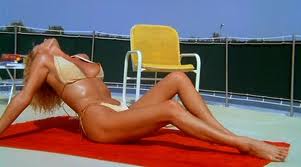 They’re playing with fire starts beautifully with a nice sex scene, but the nudity tappers off. There are only 3-4 nude scenes and a bonus extra boob from one of the idiot college students. Would the lack of gratuitous nudity make this not worth the watch? Oh fuck no! This is a pretty fun movie despite Eric Brown’s terrible performance as Jay. The story moves along nicely and there’s just enough nudity to keep you watching and besides this is SYBIL DANNING we’re talking about! You NEVER shut off a Danning movie, EVER!

4 Heaving Sweater Puppies out of 5