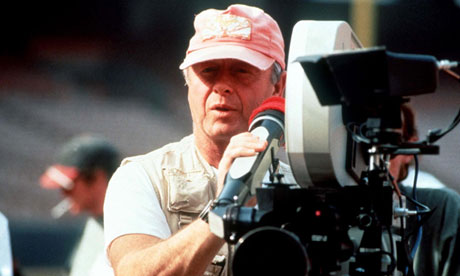 I always called Tony Scott a master of visual chaos. His films had a violent heartbeat; pumping out classic action scenes from impressive aerial dogfights to Mexican stand-offs that ended in bloodshed, from vampires to vengeance. Scott was never subtle, but I am not sure I ever wanted him to be. His films were always like race cars, the audience was in the passenger seat and Scott was the driver waiting for the light to turn green and when it did, buckle-up because you were quickly thrown into a world with speed, bullets, and brawn shot in shades of blue and red through thick smoke and salty language. Tony Scott was a master of his craft and though he may no longer be with us, he left an impressive catalog of films; fully loaded and ready for a ride. Here are my Top 10 favorite Tony Scott films, viewed annually and quoted regularly. Dig it! 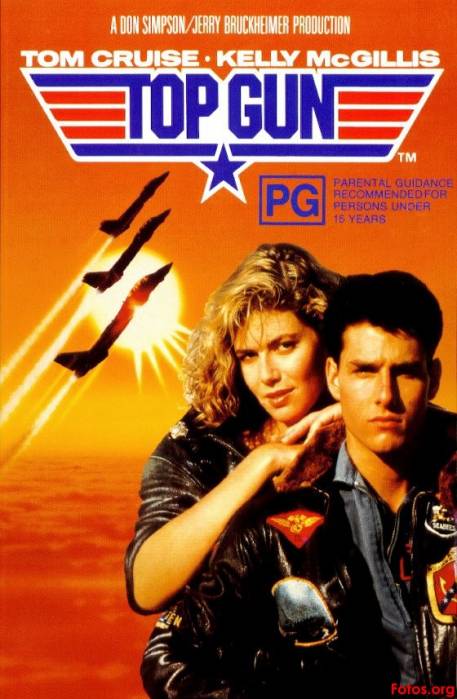 The dogfights are to this day some of the best I have ever seen. They are injected with an intensity that is missing from most aerial battles. The film itself hasn’t aged well however. It is cloaked in ‘80s music and styles that make me cringe as much as the bad dialogue but it established Scott as a legitimate action director and gave him access to projects he would otherwise not have had the opportunity to grab. This was the first of four collaborations between Scott and the producing team of Jerry Bruckheimer and Don Simpson. 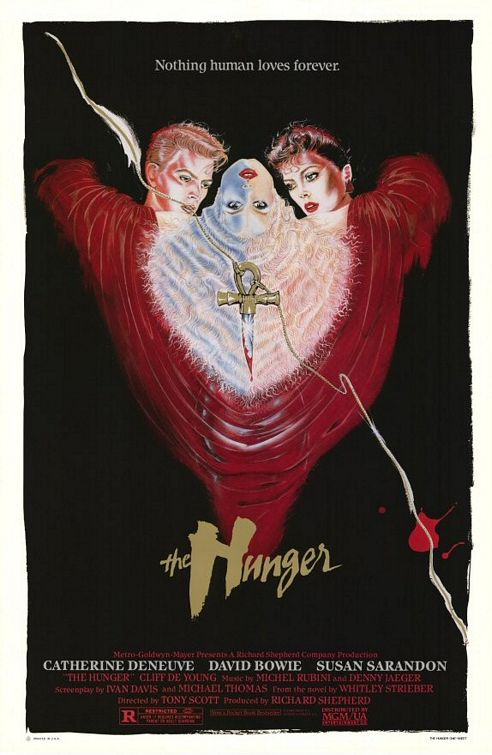 The opening features Bauhaus singing their famous song Bela Lugosi’s Dead, setting the expectation for the audience that they were in store for a new style of horror. Scott’s debut film doubles down on camp but his visual style was on impressive display. Though the film is far from perfect, the flashbacks are more than distracting, it’s an interesting film that embraces its exploitation roots. 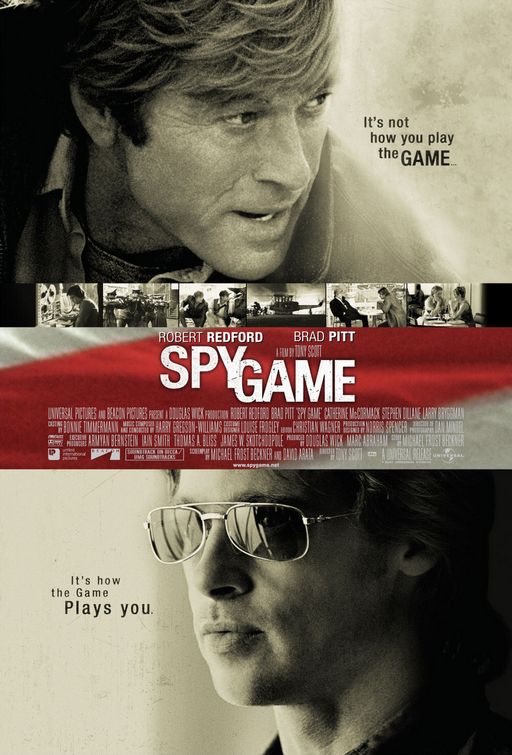 Scott’s first film of the ‘00s after taking a break following 1998’s blockbuster ENEMY OF THE STATE (a film that was to star Nicholas Cage before he left for SNAKE EYES) is probably his most intricately plotted thriller. Scott rarely embraced ambiguity in his films until this Redford/Pitt vehicle. His characters were always black and white but SPY GAMES lives in the same gray space as the characters that inhabit the film. This is one of those films where the plot holes become points of debate. Enjoyable to talk about instead of frustrating to find. It should also be mentioned that this was perhaps Redford’s best role in more than a decade. 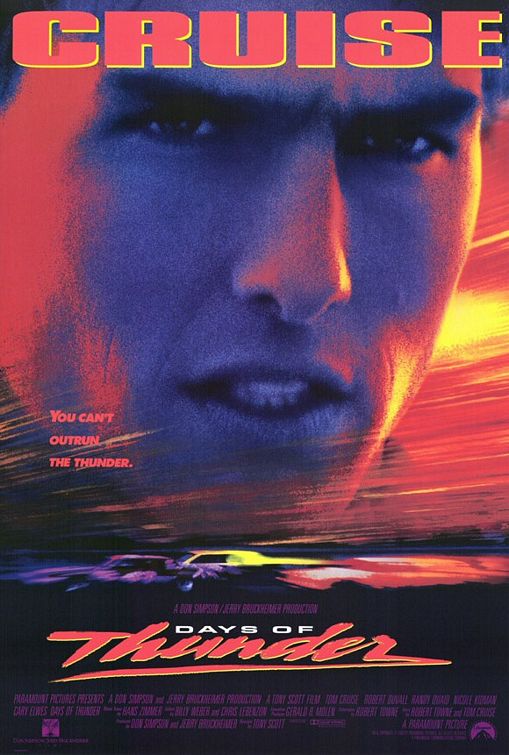 If you call this TOP GUN on the race track I am going to punch you in the face. This has nothing to do with TOP GUN and doesn’t even come close to resembling that story. Cole Trickle doesn’t have anybody really fighting for him outside of Randy Quaid, and if that’s all you have you’re fucked. Fortuntately, Cruise’s Trickle eventually wins over the heart of grizzled race vet Harrry Hogge played effortlessly by Robert Duvall and this is really where DAYS OF THUNDER comes into its own. Scott pays attention to the Trickle/Hogge relationship, it may not work all the time but it works enough to give this film more heart than you would expect. The Simpson/Bruckheimer machine was in full force at this point; pounding out flashy films that fully embraced everything that Tony Scott did well. DAYS OF THUNDER is a machine, but it’s finely tuned and fast as hell. 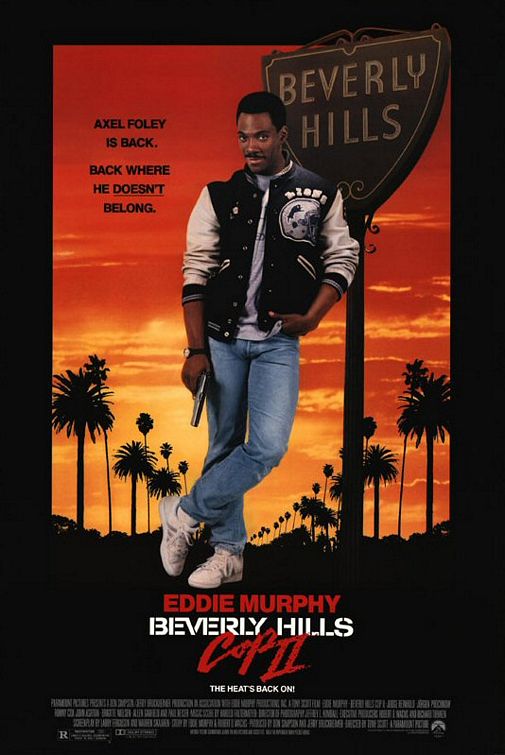 Sometimes, you have to say fuck funny and just go for the action. If you fuck funny, you call Tony Scott for the action, especially if it’s circa ’87 and he’s coming off of TOP GUN. This is an action riff done in the key of the first film. This flick is a freight train with a weak story but goddamn it’s fun as hell. Eddie Murphy had two good flicks following this film; COMING TO AMERICA, and the underrated METRO. After that he decided to shit on his career and our eyeballs. 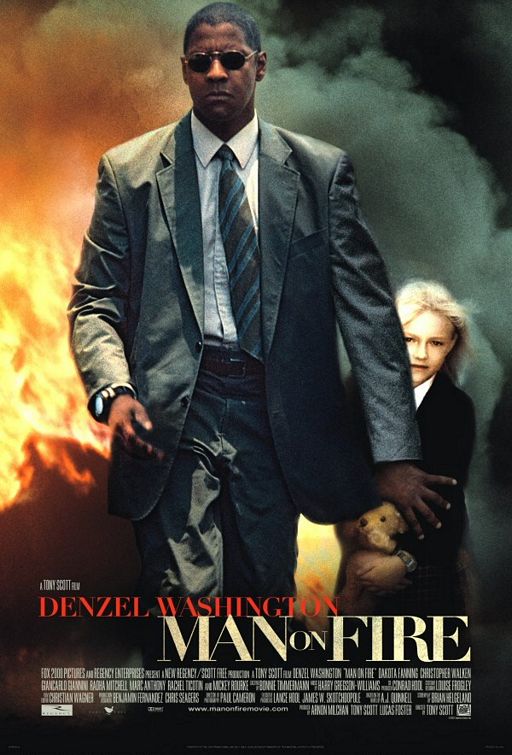 Tony Scott had been trying to make MAN OF FIRE since 1983. I am glad he waited because I think this is a film that requires hindsight and maturity he probably didn’t possess in the early ‘80s.This is perhaps the darkest film Scott ever directed. It is a brooding, dangerous film that is never pleasant but there is something we root for in Denzel Washington’s Creasy. REVENGE is equally dark though it is more about two souls finding each other and less about redemption, something Creasy is desperately seeking. His chaotic state of mind is given a unique presentation via Scott’s visual abilities. Scott clearly started experimenting with his style in MAN ON FIRE, the same framing of shots, jump cuts and generally gritty aesthetic is even more present in DOMINO though to far less effect. 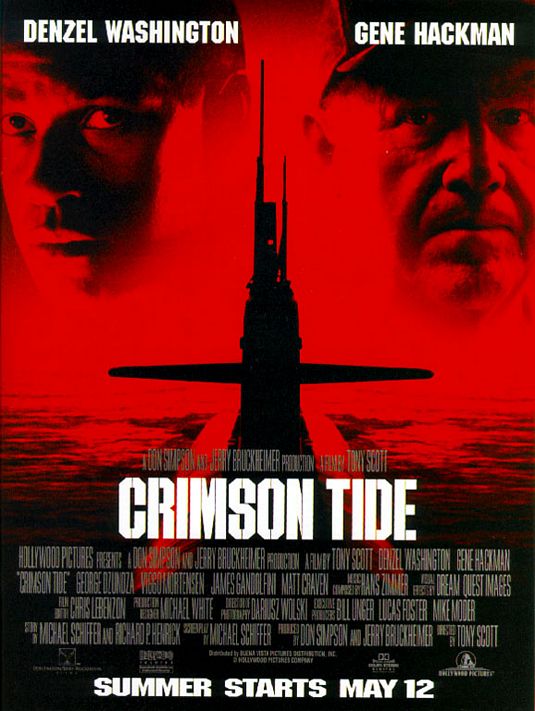 Though this comes in at number 5 I think this is perhaps Scott’s best film. Denzel Washington turns in a great performance (his first of five collaboration with Scott) , but this is Gene Hackman’s film. He towers above the cast and has a controlling presence as the grizzled captain. Though this film has very well staged action scenes, including a white knuckle scene as the submarine losses power and sinks to hull crushing depths, it is the dialogue and skilled direction that allow this film to go beyond your average action picture. The final film from Scott that was produced by Bruckheimer/Simpson. 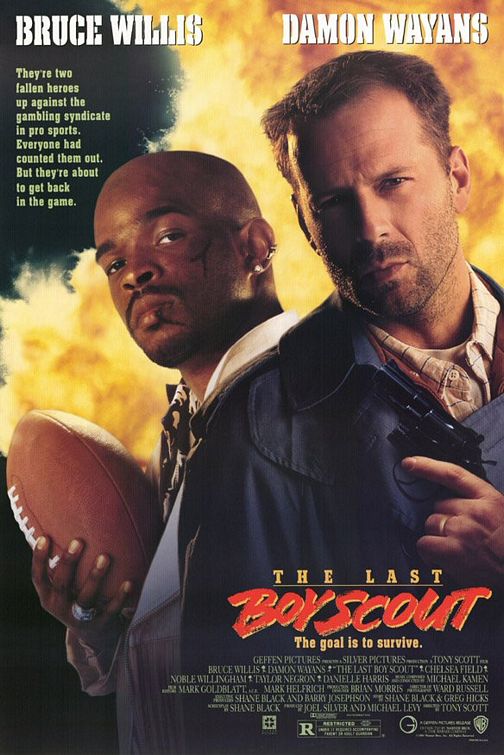 Tony Scott directing a Shane Black script (the highest amount paid for a script at the time), what could possibly go wrong? Apparently a lot as this film failed to click at the box office. It’s a head scratcher, this is a no-holds barred action film that moves fast and furious from the minute Billy Cole takes out his 9mm at the 40 yard line and decides to start capping the competition before turning the gun on himself. Bruce Willis puts the dick in detective and Damon Wayans is there to supply the funny but it’s Black’s script combined with Scott’s ability to create compelling action scenes which elevate this film above the other imitators. It did eventually find an audience on VHS but didn’t supply the studios with the confidence to pair Willis/Black/Scott together again. 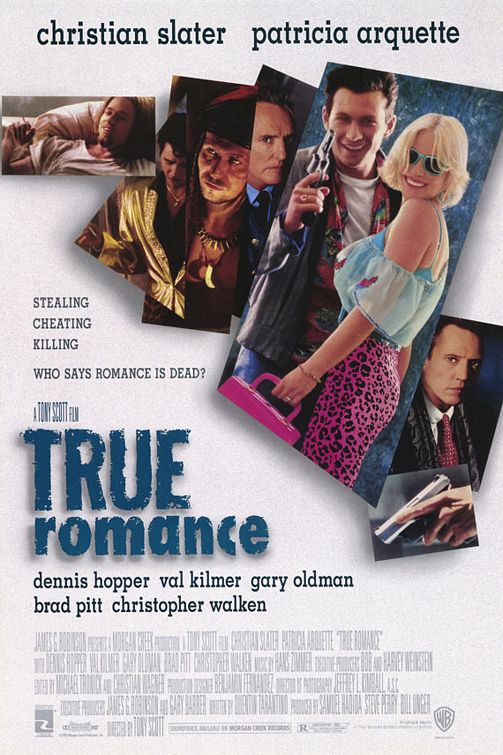 Some couples laugh about their first date, others reminisce about chance encounters. Clarence and Alabama get all weepy on a beach, thinking about that one time they ended up with suitcase full of cocaine and were chased by gangsters finally ending up in a Mexican standoff in Hollywood. Now that’s my kind of love story.

We all know this was written by Tarantino, most of us know QT sees himself as the character of Clarence Worley. It’s kind of where he was at mentally at the time he wrote this film. But this was almost the Tony Scott project that never happened. William Lustig had secured the project and was working on re-writes with Roger Avery when he got a call that he was being bought out and the project was going to go to Tony Scott. Lustig’s idea was more along the lines of a Don Siegel film and didn’t have the flash and flare that Scott injected into it. Scott was trying to persuade Tarintino to let him do RESERVOIR DOGS when Lustig was given his walking papers and a cult film was born. I am kind of glad this wasn’t a huge hit, it would have taken away something from the film. This feels like it’s “our” film. This is the best cast Scott ever had, a killer script, action, gun fights, an amazing fistfight and a classic scene between Christopher Walken and Dennis Hopper that would become one of the greatest moments in ‘90s cinema. Dig it! 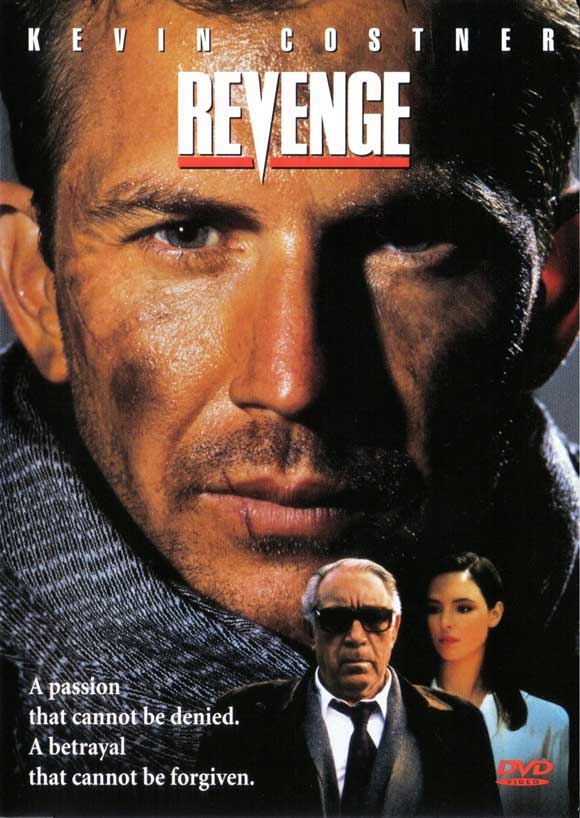 Scott has never been as patient as he is with this film. The characters slowly form bonds of love, and in doing so, break long standing oaths of friendship and loyalty. Kevin Costner lobbied for the film to be cut and he had the political power at the time to win that fight but I would suggest hunting down the Director’s Cut of the film which is far superior and Scott’s true vision for what was intended. Nearly 30 minutes were added and it elevates a good story into a great one. It takes care of a lot of the narrative issues present in the original cut. This is a tragic tale that serves up exactly what is promised in the title. It is a visceral third act that is haunting and heartbreaking but it allowed Scott to make a film that is ultimately unique in his career; a slow burn of retribution.

Thanks for the ride Tony, you will be missed.

For more on the career of Tony Scott visit IMDB.