Everyone knows about horror hosts, from Elvira to Ghoulardi to Zacherley to Vampira, and the world of the ghouls and boys who make wisecracks in between commercials and whatever (usually terrible) horror flick the channel they’re on got the rights to has been heavily researched in recent years.  Heck, there’s multiple books about ‘em and even a documentary!

But what about the horror hosts that never, well, hosted anything?  What about the ones that were inspired by the greats but never actually existed on their own?  What about the ones who were just too damn fictional to have actual biographies?  We here at Daily Grindhouse want to make sure they get their moment in the sun as well, so we’re proud to present our list of the Top 10 Fictional Horror Hosts.  The movies may consist solely of a goofy title and some stock footage, but that doesn’t make the spookshow ambassadors who introduce them any less fun to watch.

The idea of a lead character on a sitcom running for city council would now be a half-season story arc, but in the ’70s, it was a premise that would only take 25 minutes to settle out. When Felix (Tony Randall) gets Oscar (Jack Klugman) to run in a late-season episode of “The Odd Couple,” he ends up facing off with his opponent on television via local horror host Igor’s presentation of THE MYSTERIOUS PLANET DEBBIE in an attempt to woo the horror fan vote. Igor doesn’t have much to do other than come out of his grave every couple of minutes and introduce the film, but hell, could the Crypt Keeper ever sway local politics? 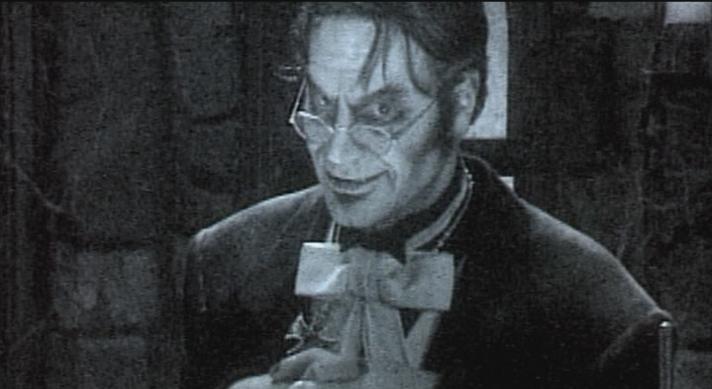 Director Rob Zombie was originally planning on playing the horror host that appears occasionally during his directorial debut, but instead he just appeared for a few seconds as his assistant. Production designer Gregg Gibbs ended up with the role, but Zombie gave him a nifty theme song (“Everybody Scream”) which, presumably, would introduce “the ghost host with the most”’s show on Channel 68. The film doesn’t really utilize him much outside of a framing device, unfortunately, which seems to be a staple of the works of the easily-distracted Zombie. Alas.

Super-pal Jimmy Olsen had a wide range of bizarre experiences during the course of his comic, becoming a turtle man, marrying an ape and having a never-ending love of pancakes.  He also briefly became a horror host, filling in for “Midnight Scare Theatre” host Phanto when he’s knocked out by a light fixture.  However, Jimmy’s identity of “Nelso” proves too scary for his own good, and audience members keep dying of fright due to his costume choices, including a skeleton and a ghost!  Of course, it all turns out to be part of a government witness protection program (!) and Phanto is soon back to his hosting duties, but as far as the world knew, for a brief time Superman’s best pal was causing deaths due to just being too spooky to handle.

Unlike most of the other hosts on this list, Zombo is legitimately freaky.  Outfitted like a deranged villain in a silent film and given gleeful energy by veteran character actor Nye, you can easily see why Eddie Munster is so fascinated by him, to the point where dad Herman gets jealous with regards to his affections.  The rest of the family finds it “good, wholesome entertainment,” as the afternoon program continues showing segments of what appears to be an epic-length series called MARK OF THE WEREWOLF (episode 26 is featured), and when Eddie wins a contest to get him on the show, Herman goes into overdrive to impress his son.  Of course, Eddie soon finds out that Zombo is just an actor, causing him to run back to respecting his pop.  Happy ending!

Medusa is pretty awesome, hosting a lite-night horror show (featuring ATTACK OF THE… something or other) watched by Sherman Putterman (Chad Allen) and his grandfather (Bert Remsen), showing off her marshmallow-like boobs and taking Sherman’s phone calls about an alien invasion in stride, snarkily bitching at the kid. She even agrees to show up for a party they’re having when Sherman’s sister invites him. Unfortunately, she then kills the good alien and causes the possible end of the world, so points off.

Lynn Redgrave parades in a variety of fantastic outfits as the late-night local horror host in Norman Thaddeus Vane’s oddball flick, even as folks around her start getting murdered. You can read all about her exploits here.

Booberella is basically Elvira with even more emphasis on booooooobs. She hosts “Matinee of Blood and Commercials,” watched by Simpsons clan (showing films like FRANKENSTEIN AND THE HARLEM GLOBETROTTERS MEET THE MUMMY AND THE WASHINGTON WIZARDS), but she has a life outside of horror hosting, including a line of handbags and an appearance with Kent Brockman on the news debating Mr. Burns’ purchase of the channel. Her input? “Boooooobs.”

She occasionally dates Duffman, though that was revealed to be a publicity stunt to hide his homosexuality.

Clearly a take on Al Lewis’s Grandpa Munster, veteran actor Prosky’s Grandpa Fred wanted to be a newsman, but ended up introducing the likes of ATTACK OF THE OCTOPUS PEOPLE for the Clamp Network instead. When the Gremlins take over the building, however, Fred sees the chance to make his dreams come true and covers the story as the only reporter in the building with access, enlisting a Japanese tourist (Gedde Watanabe) to be his cameraman. Fred’s a great character and his fearlessness makes him completely compelling, but, dang, Fred, there’s no shame in horror hosting! Embrace it!

If only SCTV could have afforded real films for Floyd’s “Monster Chiller Horror Theater.” He may not have been as frustrated as he was, having to convince his audience that TIP O’NEILL’S 3-D HOUSE OF REPRESENTATIVES is, in fact, a truly frightening tale. But then we wouldn’t be as entertained. The longest running character on this list, introduced in 1977 and still appearing today (check out our “Grindhouse Grooves” column for his latest), Floyd has shown up on a Rush tour, released an album, appeared in a cartoon, pitched a roller coaster and (via SCTV) hosted a Christmas special including Lucille Ball and the kid from DELIVERANCE. How the hell could any fictional horror host top that?

Oh, right, by ACTUALLY SLAYING VAMPIRES. Sure, Peter Vincent isn’t exactly thrilled that his life-long career as a horror star has relegated him to introducing OCTOMAN (under the title MARS WANTS FLESH) on Channel 13’s low-rent “Fright Night” series (I mean, he was in BLOODFEAST ON BROADWAY!), but he bounces back when Charlie Brewster comes to him with a tale of his neighbor being a vampire. Eventually. After Charlie’s friends bribe him.

But he certainly comes through in the end, after a fanged Evil Ed forces him to confront his cowardice, and he and Charlie manage to save the day. Even in FRIGHT NIGHT PART II, when Vincent is replaced by performance artist Regine (it was the late ‘80s, and it seemed like a good idea at the time), he picks himself up and comes to Charlie’s rescue again. Granted, there’s some time spent in a looney bin in there as well, but, hey, we’ve all got our share of issues. Vincent is always a hugely entertaining presence whether or not he’s on camera, even when the films he shows aren’t his own.