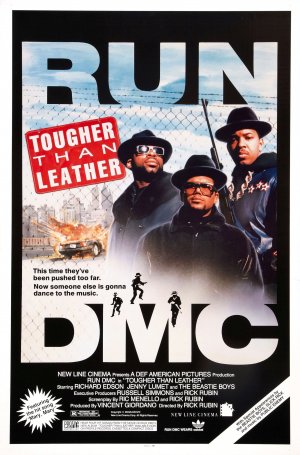 CLICK THE POSTER TO BUY THIS GOOD SHIT ON VHS!

We can RAP, so surely we can ACT!

Hip-hop legends Run DMC star in this action thriller directed by Rick Rubin – who can PRODUCE, so surely he can DIRECT!

There’s a good time to be had with TOUGHER THAN LEATHER: Rappin’, fightin’, gold-chain wearin’ – you simply can’t go wrong.

After their friend is ruthlessly murdered, our Adidas-sporting heroes take on an evil empire. Rhymes are slung and asses are kicked.

Rubin later collaborated with hip-hop legend Snow in an attempted follow-up. Sadly, TOUGHER THAN CUSTARD never made it through the script stage. And by “script” I mean a couple words scrawled in crayon on the back of a Carl’s Jr. napkin.

A LICKY BOOM-BOOM DOWN!