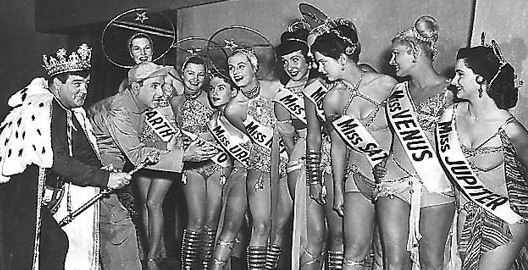 In what can best be described as a massive stroke of luck, Bud and Lou accidently launch a rocket ship with a projected course to Mars but land instead on Venus; a planet populated entirely by gorgeous women. True to their nature, the duo fail to take proper advantage of an ideal situation, instead pissing off the planet’s queen, Allura (Mari Blanchard), who sends them home with a pair of misguided missiles between their legs.

Never a favorite of mine as a kid (Abbott and Costello movies were a weekend staple at my house), this later entry from the boys seems to play better for me as an adult, thanks in no small part to its casting of Miss Universe contestants as the Venus population. A bit ahead of its time, this was the first flick to feature a society of outer space babes; a plot device featured in a slew of films throughout the decade such as CAT-WOMEN OF THE MOON (1953), FIRE MAIDENS FROM OUTER SPACE (1956) and QUEEN OF OUTER SPACE (1958). Viewed as a historic piece of sci-fi camp, viewers can have some fun with the flick as long as they don’t go into it expecting a funny Abbott and Costello comedy. Minus some amusing moments with the out of control rocket ship careening through New York City (courtesy of some hilariously ancient special effects) and a slow motion bit involving a gun, this is a tired entry in the duo’s filmography.

Directed by Charles Lamont, the team’s regular director throughout the 1950s, A&C GO TO MARS has long been accused of being Abbott and Costello’s worst film. I find it has too much imagination and eye candy to fill that slot, and will gladly revisit it over some of their other lackluster 50s efforts (LOST IN ALASKA anyone?). Besides, any film with an early appearance from Anita Ekberg can’t be that bad. 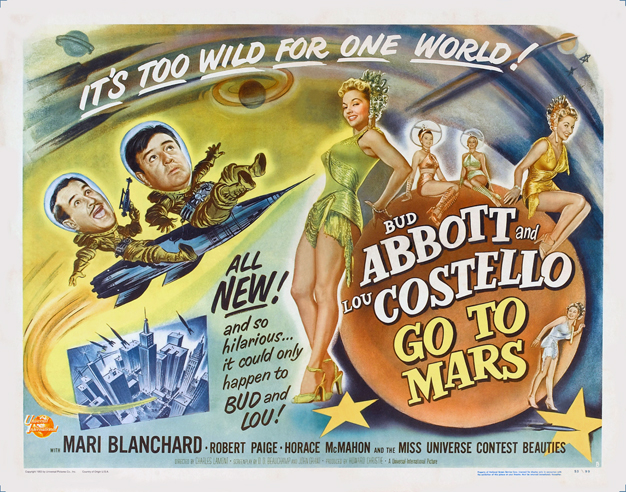 Tags: abbott and costello, Abbott and Costello Go To Mars