A ghost assisting in their own murder investigation is nothing new to film. Movies like THE LOVELY BONES and even GHOST have tackled the subject matter in their own subjective ways, but it’s their style that helps differentiate them from the next. Unique filmmakers and unexpected casting can help create a sense of wonder in a familiar story. GHOST OF NEW ORLEANS has that unique flavor if the trailer is of any indication.

Josh Lucas stars as the kind of detective who wakes up holding onto a bottle of whiskey that is assigned to a murder case. It looks like this most recent victim might be part of a string of murders where the killer leaves strange masks on their dead bodies. Lucas encounters, or believes he encounters, the spirit of this latest victim, played by Lake Bell. Investigating suspects introduces Lucas to some interesting characters and gets a taste of some southern hospitality. 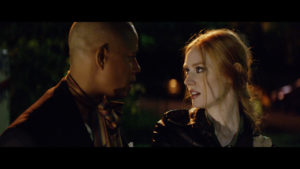 The trailer will entice those who love Louisiana based, southern-fried productions as it definitely gives off that authentic feel that is important in movies like these. This will for sure fall into the group of movies that blur the genre lines such as EVE’S BAYOU and THE GIFT (the Billy Bob Thornton written one). Watching the trailer made me surprised to see that Deborah Ann Woll didn’t get any on screen credit as she has a made a name for herself in TRUE BLOOD, the vampire HBO series also set in Louisiana. GHOST OF NEW ORLEANS continues a long string of roles for Terrence Howard as the not one to be trusted, including his current starring role in the hit series EMPIRE. It’s nice to see Lucas return to the genre, as he costars in one of this writer’s personal favorites, SESSION 9. GHOST OF NEW ORLEANS appears to be more focused on that southern charm than delivering scares, but that angle is what will attract audiences upon its release. With its take on new kind of noir subgenre, this looks like an interesting one to keep an eye out for. 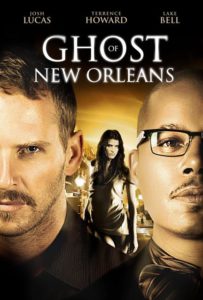 GHOST OF NEW ORLEANS will be in THEATERS, VOD AND DIGITAL HD on February 17th.