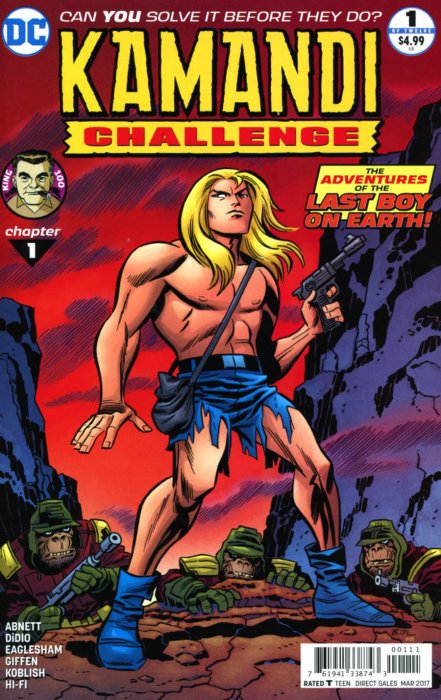 Near as I can tell, 2017 looks like it’s gonna be a pretty rough year — what with an insane, mouth-foaming lunatic in the White House and everything — but on the plus side, it’s also the 100th anniversary of the birth of the greatest genius to ever grace the comic book medium with the fruits of his imagination, the one and only Jack Kirby. From all appearances, Marvel appears to be doing fuck-all to honor the man who created 90-plus% of the characters they’ve built a multi-billion-dollar empire off, but at least DC seems to be willing, perhaps even downright eager, to give “The King” his due, so kudos to them for that. First item up in the year-long celebration? Kamandi Challenge, a 12-part “round-robin”-style series that revives the old DC Challenge conceit of having a different creative team solve the “pickle” left for them by the previous one.

Truth be told, though, the rules of the DC Challenge were considerably more difficult — back then, writers and artists would lay down subplots and cliffhangers that the next folks had to solve using entirely different characters, while this time out, it’s strictly a cliffhanger-only affair and, of course, The Last Boy On Earth is the star of each and every issue. So, I mean, yeah — as far as “challenges” go, this one’s pretty easy. But that doesn’t mean that it can’t still be a hell of a lot of fun. 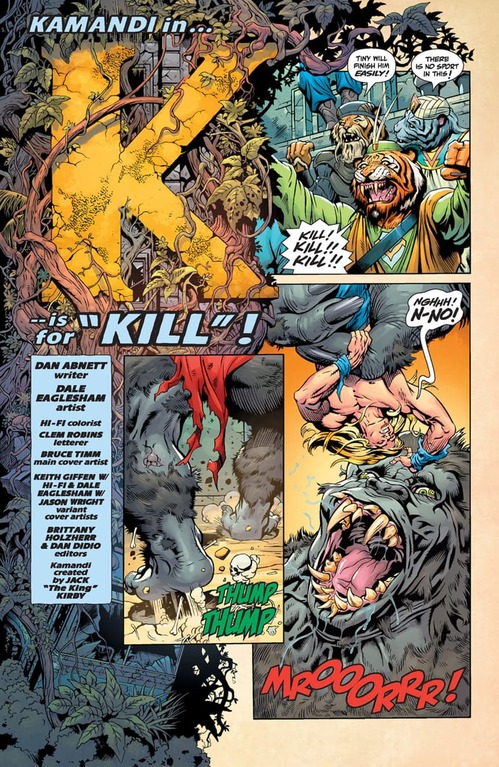 DC co-head honcho Dan DiDio and veteran artist Keith Giffen get the ball rolling in this extra-sized first issue with a “prelude”-type story that sets the ground rules and provides a reasonably decent introduction of sorts to the characters, but before you all head for the hills, let’s remember that, for all his numerous and obvious flaws, DiDio is a massive Kirby fan and he and Giffen teamed up for an OMAC series in the early days of the “New 52” that was one of the best offerings that now-concluded (I guess?) revamp had to offer. DiDio also has at least a decent surface-level grasp of Kirby’s writing style and can turn in a respectable approximation of his absolutely unique dialogue, and Giffen, for his part, knows how to impart his illustrations with a certain amount of Kirby-esque dynamism and flair without being slavishly beholden to the idea of aping his style outright. All in all, then, the two of ’em do a more than adequate job of laying out the particulars here and then getting out of the way and letting post-catastrophe Earth take center stage. 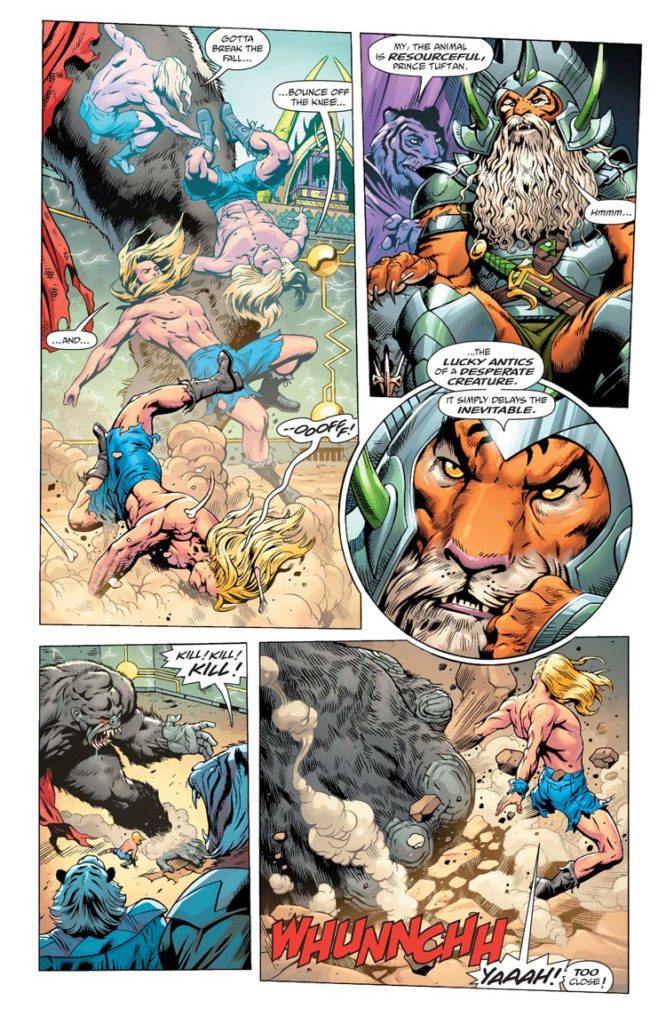 Enter scribe Dan Abnett, artist Dale Eaglesham, and colorist Hi-Fi, who bring us a brightly-hued, dare-I-say-magnificently flowing action spectacle that pits all the characters fans of the series love — Kamandi, Prince Tuftan, Doctor Canus, King Caesar, etc. — against all that the future world of intelligent animals and danger lurking around every corner has to offer, beginning with a fight to the finish against the giant ape, Tiny, and racing at breakneck pace from there to a less-than-imaginative, but staggeringly appropriate in its simplicity, “countdown clock” cliffhanger. Abnett’s dialogue is more than a  bit overly-expository by contemporary standards, but that’s all part of the fun as far as I’m concerned, and “fun” is definitely the operative word of the day here — a point driven home nearly relentlessly by Eaglesham’s gorgeously fluid art, which Abnett wisely allows to do the bulk of the storytelling. Does it “look like Kirby”? Hell no, but it fits Kirby’s world nicely, and besides, if straight-up homage is your bag, there’s always Bruce Timm’s splendid cover to make you (probably more than) happy. In short, I think that if “The King” himself took a look at this book, he’d be downright pleased to see what these guys have done with his characters and concepts. 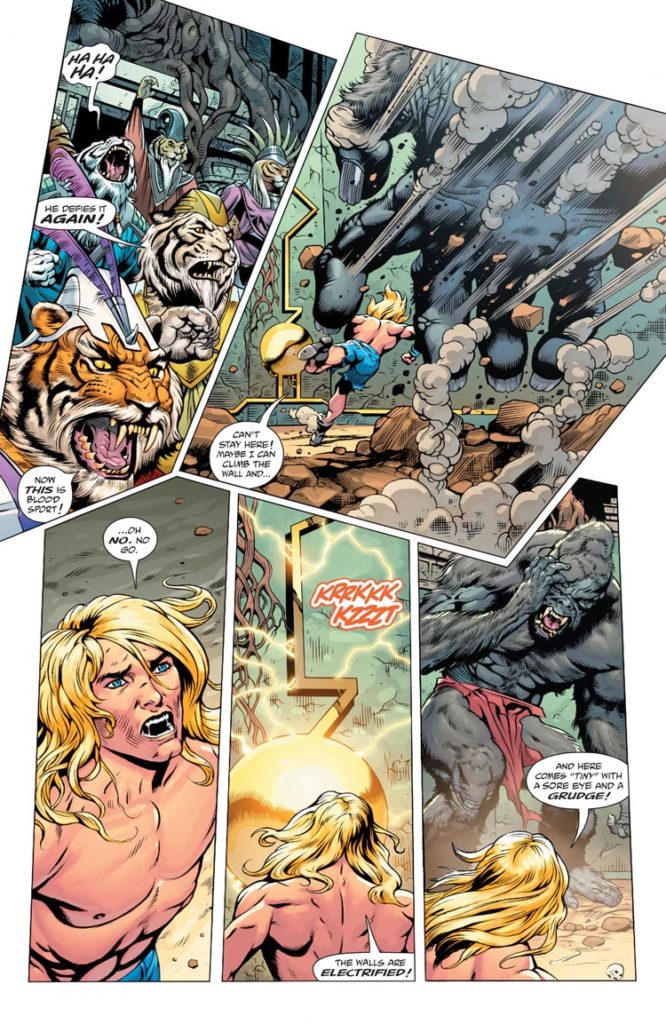 What if you’re a “Kamandi Virgin,” though? Hmmm — good question. I’ll be perfectly honest — longtime fans are probably bound to get much more enjoyment from this comic than newbies, but my best guess is that anyone and everyone, regardless of “experience level,” will find more than enough here to make the five bucks they plunked down for it seem like a fair trade. If “high adventure in a world gone mad” is a premise still capable of entertaining you, then Kamandi Challenge #1 is more or less stone-cold certain to be up your alley. It’s got highly likable characters in far-out and far-flung situations, cool monsters, and amazingly illustrated action, so I don’t care who you are — this is a comic that damn near forces a smile onto your face, and then dares you not to keep it there. Whether it can continue doing so is up to the creators that will be stepping up to the plate to handle future installments, but given that Peter J. Tomasi and Neal Adams are up next, something tells me it’s safe to assume that we’ll be in very good hands indeed.

So — how much did I love Kamandi Challenge #1? I’ll put it to you this way : Jack Kirby’s original Kamandi is quite possibly my favorite series of all time, and while this has absolutely no hope of supplanting of superseding that, it feels like a very worthy successor. Strap in for the duration, then — this promises to be an exhilarating ride.