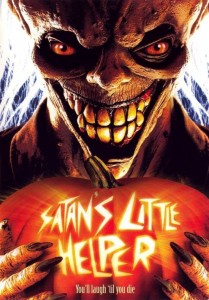 Director Jeff Lieberman might fly under the radar of the casual movie fan, but despite being neither prolific nor mainstream, he created some quiet classics. From the trippy BLUE SUNSHINE to the gritty JUST BEFORE DAWN, Lieberman crafted a filmography that compensates for brevity with charm.

I didn’t expect much from SATAN’S LITTLE HELPER. It has the look of a TV movie, and the trailer screamed typical slasher. Worst of all, it starred a little kid. Thespians who are not old enough to smoke are usually the kiss of death. Unless they’re playing Atreyu. I kid! He sucks, too.

Grating children aside, SATAN’S LITTLE HELPER is a blast. It might not be scary, but it’s clever and campy. They even – God forbid! – provide a little characterization to the serial killer fodder. And a tip of my furry pimp hat to the villain. He might just be a guy in a Halloween mask without a lick of dialogue, but he’s fucking hilarious.

If you can ignore a somewhat weak ending and some distinct moments of Idiot Plot, when it’s all said and done, SATAN’S LITTLE HELPER is a great waste of 96 minutes.