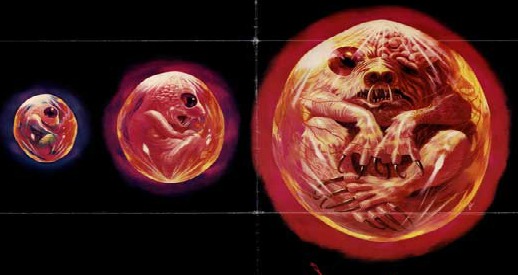 Though director John Frankenheimer may be better known for such action classics as 52 PICK-UP, RONIN, and THE FRENCH CONNECTION TOO, he occasionally dabbled in monster flicks.

PROPHECY weaves the cautionary tale of big business destroying a forest for capital gain, at the same time running roughshod over some Native Americans who have lived in said forest for generations. Utilizing copious amounts of mercury, the evil corporation has inadvertently contaminated the local wildlife, producing raging raccoons and towering salami monsters.

Despite its heavy-handed environmental message and occasional moments of unintentional hilarity, PROPHECY is pretty solid. The film is overly talky in parts, but the graphic carnage more than compensates. It is also 87% better than Frankenheimer’s remake of THE ISLAND OF DR. MOREAU.

Be on the lookout for Armand Assante as a Native American, by way of Sicily.