Pregnancy is a perfect topic for horror, as it involves another human being literally growing inside the body. Perhaps less exploited yet no less applicable are the emotional and psychological aspects of pregnancy — not only does the mind struggle to keep up with the body’s changes, but various economic and social factors can increase the pressure on a pregnant woman. The mother of horror films to use the state of pregnancy as a source of horror is of course 1968’s ROSEMARY’S BABY, a movie that’s mostly psychological in its horror yet contains a heavily supernatural element. FALSE POSITIVE attempts to follow in ROSEMARY’s footsteps by focusing on the plight of a woman during her pregnancy, choosing to primarily be a psychological thriller. Yet it must deliver — literally and figuratively — some terrible secret behind its protagonists misery, and that is where the film unfortunately falters. 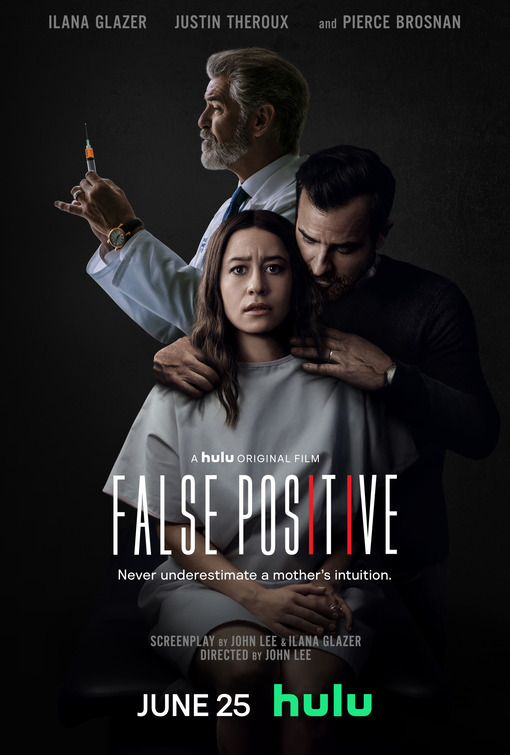 FALSE POSITIVE begins rather well, introducing Lucy (Ilana Glazer), an upper middle class New Yorker who desperately wants to get pregnant. At one point, Lucy wonders aloud if she’s a woman who could “have it all,” as she seemingly does — a wealthy and attractive physician husband, Adrian (Justin Theroux), an upwardly mobile career in marketing, and an IVF pregnancy thanks to a prominent fertility doctor, Dr. Hindle (Pierce Brosnan), who is also a close personal friend of her husband’s. Yet, thanks to a cold open featuring a bloodied Lucy wandering eerily around the streets of NYC, it’s clear from the start that things are going to go very wrong for her, beginning with Dr. Hindle informing her that the IVF was too successful, requiring a “reduction” between twin boys and a girl. The growing tension between Lucy, her husband and his colleague starts to expand, invading Lucy’s mind enough that she begins to suffer hallucinations involving mysterious safes, a creepy perpetually locked door in the Hindle clinic ominously labeled “The Lab,” and increasingly hostile behavior from those around her. Adrian, Dr. Hindle, and even her pregnant support group friend Corgan (Sophia Bush) all dismiss Lucy’s insistence at something being wrong as a case of “mommy brain,” but she knows the chilling truth.

Or does she? By far the most frustrating aspect of FALSE POSITIVE is its piling on of ambiguity while simultaneously insisting on Lucy’s veracity. As co-written by Glazer and director John Lee, the film seems like it wants to be GET OUT (2017) for pregnant women, with Lucy being systematically yet subtly attacked by the scourge of the patriarchy, the seemingly benign world she’s in turning against her. The movie is genuinely great at this, manifesting in everything from how Lucy is slowly devalued at her job until she’s eventually pushed out to how her husband and Dr. Hindle insist on an aggressive bro-hug every time they thank each other. It’s these tangible and all-too-relatable moments that make it feel as if the movie is leading up to a genuine reveal, yet it keeps undercutting them with sequences that are either clearly nightmarish or hallucinatory dead-ends, such as a scene where Lucy spies on Adrian and Dr. Hindle having a homosexual tryst (a development that actually would’ve been compelling, had it been real). 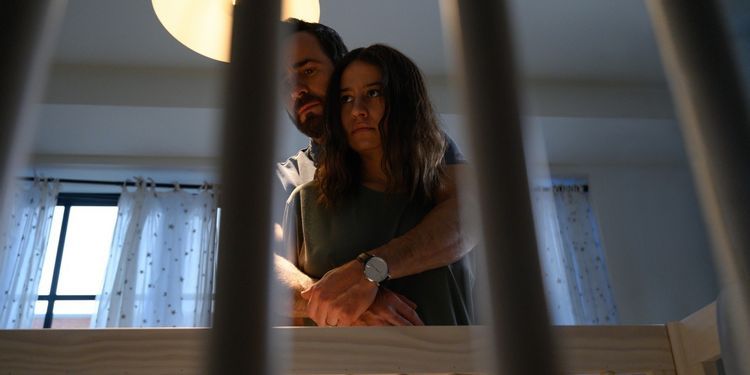 This uncomfortable duality in the movie is the biggest indication of its tonal problems — Lee and Glazer have worked together before on the Comedy Central show Broad City, and prior to that Lee was one of the people behind the unsettlingly creepy comedy series Wonder Showzen, yet at no point does FALSE POSITIVE seek to go for comedy too broadly. Lee and Glazer seem to want to play things straight, yet the potential for comedy (or at least satire) keeps cropping up, such as Lucy’s co-workers being obsessed with a particular restaurant for lunch. The film’s continual turning away from embracing its more wacky elements feels almost stubborn, as if its makers were insisting to be taken super seriously, making their efforts seem that much more desperate. By the time the movie’s climax rolls around, its big secret falls hopelessly short of the build-up Lee and Glazer have created. Worse, the movie wants to remain somewhat ambiguous as to Lucy’s state of mind — unlike GET OUT, there’s no decisive victory here, and as such the film feels remarkably unsatisfying given its establishment of an anti-patriarchal polemic.

FALSE POSITIVE would be a slog of a watch were it not for its cast, who do good work with uneven material. Glazer admirably carries the movie, showing how Lucy is chipped away at thanks to a series of microaggressions that get bigger and bigger, and her resilient determination and strength as the character is a big part of why the film’s finale is so disappointing. Theroux and Brosnan add to their stables of douchey guy and soft-spoken sociopaths, respectively, and Gretchen Mol steals nearly all her scenes, playing an intensely loyal nurse of Dr. Hindle’s. The film looks fantastic, as Lee and cinematographer Pawel Pogorzelski give the movie a brightly lit exterior that gives way to oppressive darkness and moody lighting as things go awry. It’s just a shame that the biggest thing to go wrong is the film itself, lost along with Lucy’s increasingly fractured psyche. Perhaps it’s due to the topic of pregnancy being relatively unexplored (in the horror genre or otherwise) that the movie feels compelled to overstuff the story with complications that dilute the experience. While FALSE POSITIVE is unfortunately ill-conceived, hopefully someone else can try again. 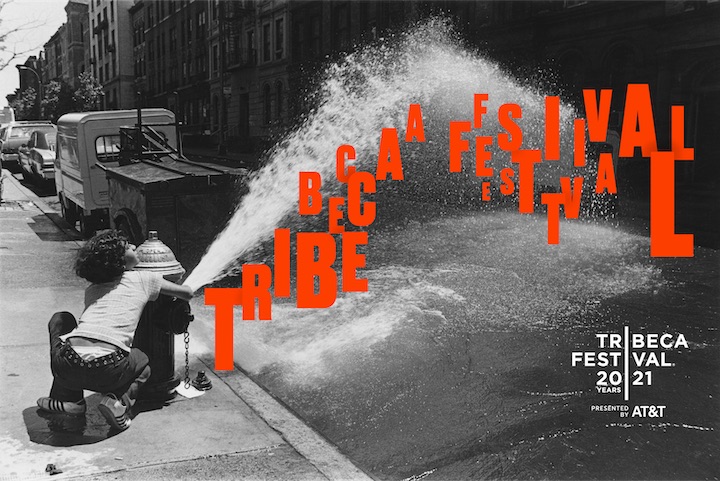