Currently airing on FX is “Feud,” Ryan Murphy’s anthology series about notorious celebrity duels, with the first season centered around the relationship between Bette Davis and Joan Crawford during the filming of 1962’s cult favorite WHAT EVER HAPPENED TO BABY JANE?. The idea of an eight-episode, all-star miniseries devoted to retelling the making of a darkly comic horror film is certainly an unexpected cause for celebration no matter how well the series itself turns out, if for no other reason than to provide a resurgence in audiences checking out the original film, a must-see for any self-respecting fan of psychotronic cinema. Even though it’s not mentioned in the piece itself, it’s no doubt one of the major impetuses for Susan Sontag’s “Notes on Camp,” the 1964 essay that attempted to define the “camp” sensibility for generations to come. 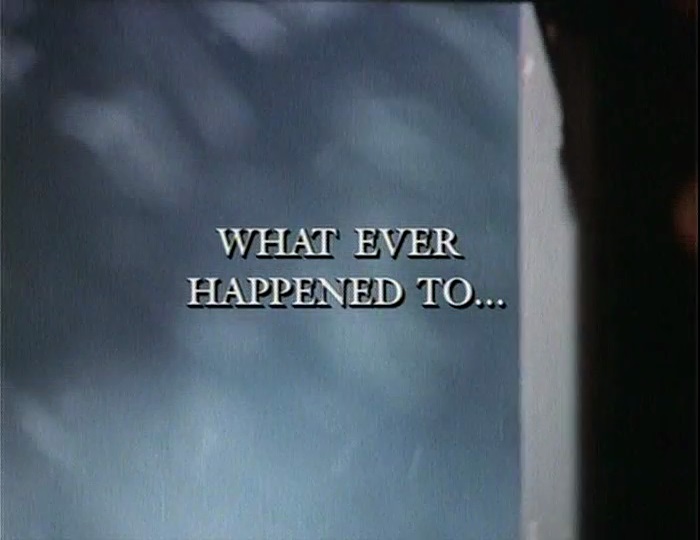 This isn’t the first time that BABY JANE has had an unexpected cultural resurgence, however. 1989 saw the publication of Sean Considine’s book “Bette and Joan: The Divine Feud” about the creation of the film (Davis passed away the same year), and two years later, a TV-movie was created for ABC, with prolific telefilm director David Greene (FATAL VISION) at the helm. (Greene had also directed the TV-movie remake of NIGHT OF THE HUNTER the same year, allowing him to corner the market on boob tube classic remakes at the time.) The film even had stunt casting to rival the tumultuous Davis/Crawford relationship, with sisters Vanessa and Lynn Redgrave working together for the first time to play the sibling pair. 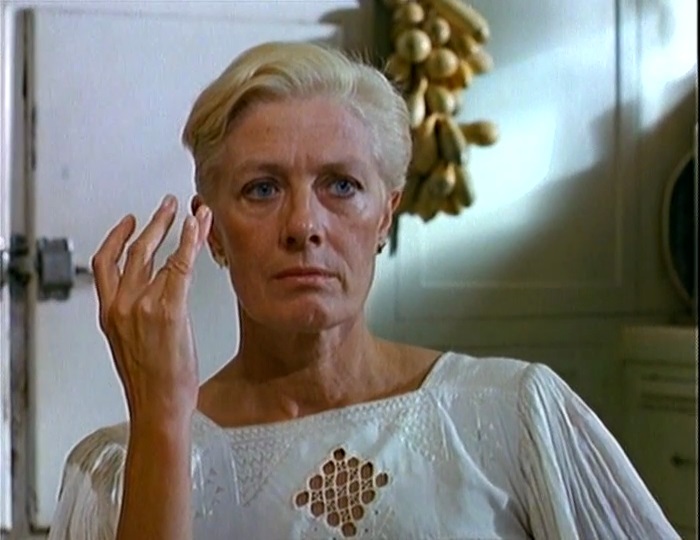 The performances by the leads, coupled with Greene’s direction and a teleplay by Brian Taggert (Who had written the TV-movies OMEN IV: THE AWAKENING and CHILD OF DARKNESS, CHILD OF LIGHT the same year), the 1991 version of BABY JANE takes on a slightly different tone than the original, even if it primarily sticks with the same general plot points. Gone, of course, is Ernest Haller’s Oscar-nominated B&W cinematography, exchanged for a relatively bland TV-movie look that Greene attempts to infuse with color primarily through make-up on Jane, played by Lynn Redgrave. In fact, the film deliberately attempts to stay away from the “camp” qualities of the original, with the more sympathetic, child-like characteristics of Jane being accented rather than making her the monster that Davis portrays in the original, at least for the bulk of the film. 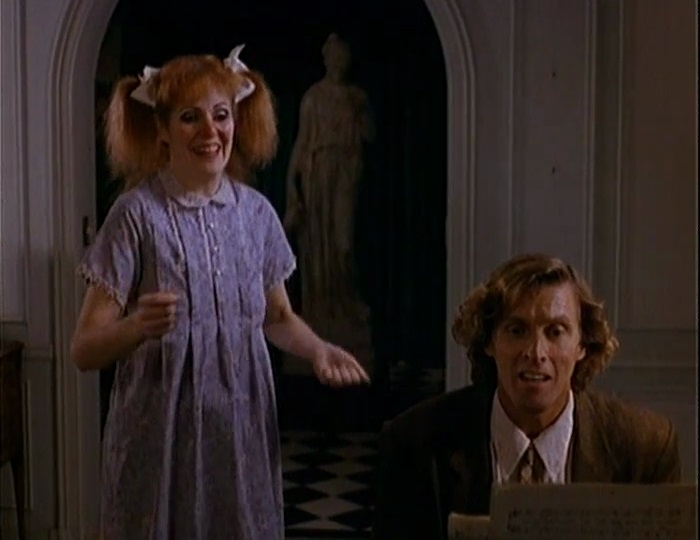 While there is a minor tweak to the neighbors’ identities (in the remake, the neighbors are yuppies, including FRIDAY THE 13TH PART 2’s Amy Steel, rather than a mother-daughter household) and the doomed household employee is switched from a cleaning woman to a male massage therapist, the largest change is in Jane’s attempt to revive her acting career. Instead of failed musician Edwin Flagg, Jane happens to befriend Billy Korn, a video store manager played by John Glover. (In a genuinely heartbreaking moment that provides the connection between the two, Korn informs her that while her sister’s films have been released on video, hers have been relegated to media limbo.) 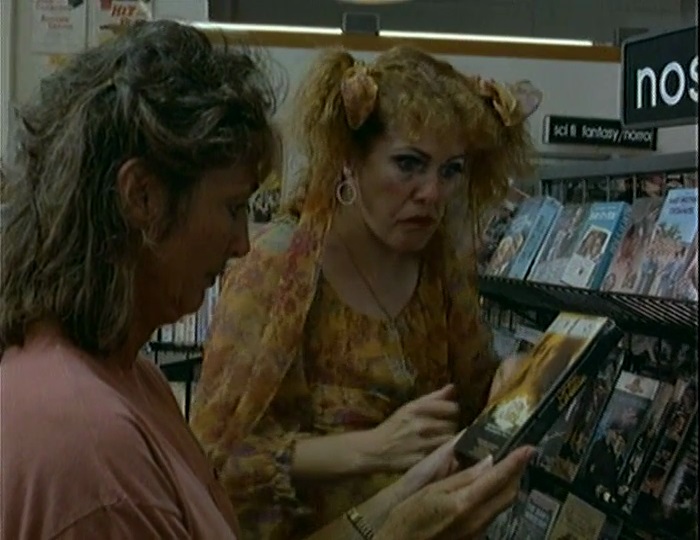 Distinct from Flagg’s ignorance to her actual career and his using her solely for a paycheck, Korn, a showbiz enthusiast, is excited by Jane’s presence and overlooks her obvious psychological issues out of both concern and financial potential. This sets up an interesting relationship that cuts back on the cynicism of the original, allowing their friendship and Jane’s partial romantic interest in her newfound comrade to take a more human turn. 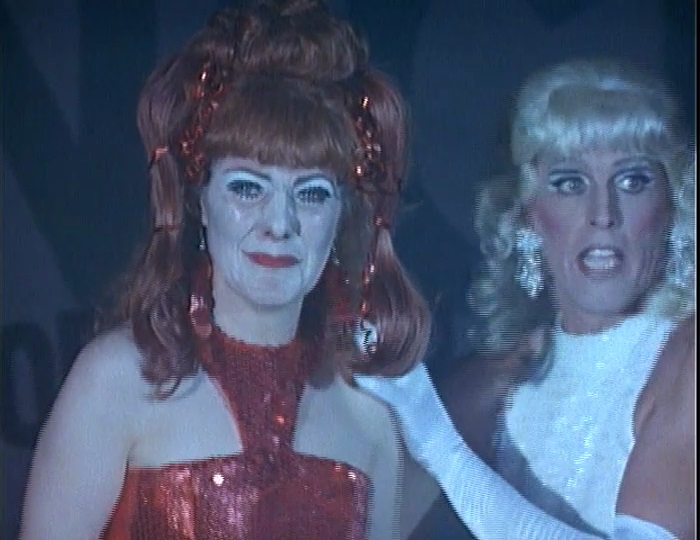 In addition, the relationship sets up the best moment in the film, one that has no equivalent in the original. Korn gets Jane to agree to a lip-synced performance of a hit record that she and Blanche had had in the ‘60s, a girl-group number called “There Should be Love.” (While nowhere near as beautifully cloying as “I’ve Written a Letter to Daddy,” it’s a perfectly adequate song.) Prompted to explain how Blanche’s part will be covered, Korn tells her that he’ll take care of it. Jane begins the number on stage at the small club venue, only to be shortly joined by Korn, dressed in drag as her sister, mouthing along in front of a sea of audience members intent on watching a drag show. Jane’s subsequent breakdown is a terrifically deranged moment, both wallowing in and referencing the drag and camp movement that the original had inspired. John Glover is fantastic in these scenes, presenting a character that’s almost as fascinating to watch as Lynn Redgrave’s Baby Jane – no small feat in itself. 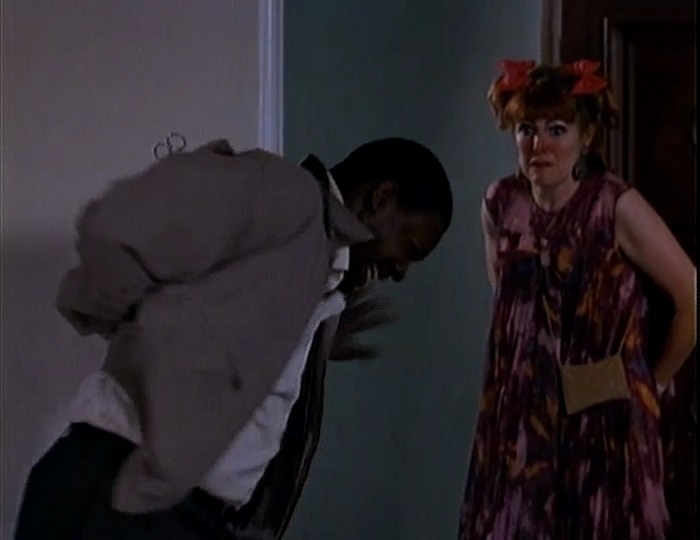 This isn’t to say that the remake improves upon the original by making this change – just that this alteration gives the remake some reason to exist outside of the casting of actual show business legend siblings as show business legend siblings. Most of the other changes are minor and do little to serve any purpose to the film, down to a bungled final shot that just serves as a reminder of what a perfectly twisted moment the finale was in the original. With the emphasis placed even more on Jane, Vanessa Redgrave isn’t given much to do, though at least one of the minor issues in the first film (who doesn’t she just yell out to the neighbors) is remedied by the neighbors not being able to hear her over their generic yuppie music. 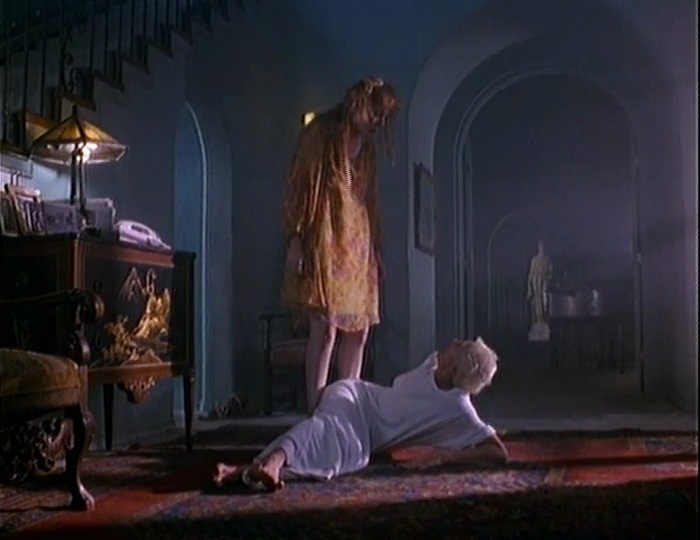 While plenty has been written on the original film, to be joined, no doubt, by innumerable pieces that will compare the film to “Feud” in the coming weeks, the 1991 BABY JANE is rarely mentioned outside of occasional footnotes. Granted, it pales in comparison to the original film, but that’s an incredibly difficult hurdle to jump, and the 1991 BABY JANE manages to have some noteworthy scenes when it strays from simply regurgitating a familiar scenario. It’s unlikely that anyone will make a mini-series ouf the making of the 1991 remake, but no film featuring John Glover in a dress can be considered a total waste, and it would certainly be interesting to think what could be done with the premise, had the original film been ignored entirely. 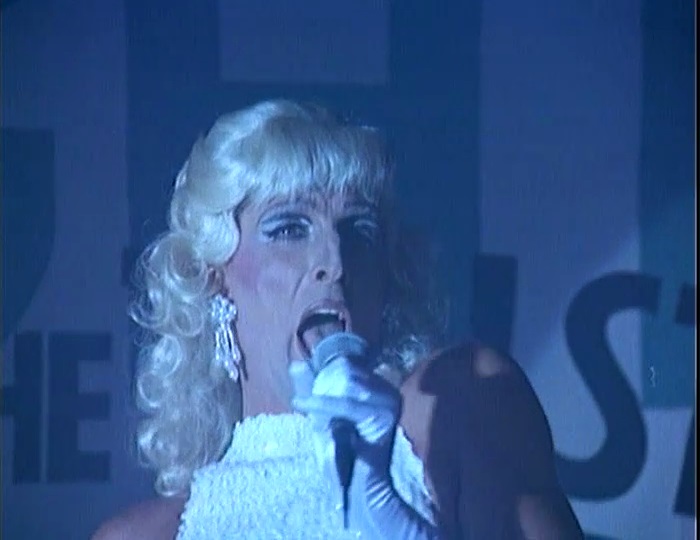