Occasionally, A Christmas Carol has made its way across the Atlantic to be told as an American tale, the way God intended.

AN AMERICAN CHRISTMAS CAROL (1979, Eric Till) re-sets the story of A Christmas Carol in Concord, New Hampshire in 1933. Scrooge has become Benedict Slade (Henry Winkler), a creditor who spends Christmas Eve repossessing the furniture of his debtors, including an itinerant farmer (Dorian Harewood), a bookseller (David Wayne), and the head of the local orphanage (Gerard Parkes), where Slade himself lived as a child.  He caps off this day of childhood wonderment by firing his clerk, the Bob Cratchitt stand-in Thatcher (R.H. Thomson) for being disagreeable, and drinking wine out of some repossessed crystal. Then ghost, ghost, ghost, ghost, Tiny Tim, the end. 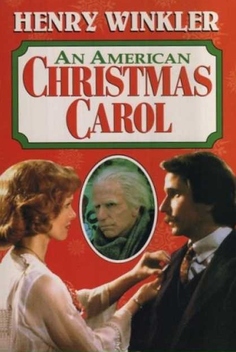 Henry Winkler was in his seventh season of Happy Days at the time AN AMERICAN CHRISTMAS CAROL aired (both were on the ABC network), and you can’t help but wonder if he took this role to prove he could play someone other than Arthur Fonzarelli. And he could! Despite some terrible old-man make-up, Winkler turns in a solid performance. During the Christmas Past sequence, his transition from earnest young go-getter to orphan-hating dickwad is gradual. And it’s not just through the dialogue, but the way he carries himself, his affect and attitude. To be fair, my expectations weren’t very high. I’d only seen him do sitcoms and SCREAM. Regardless, I was awfully impressed. 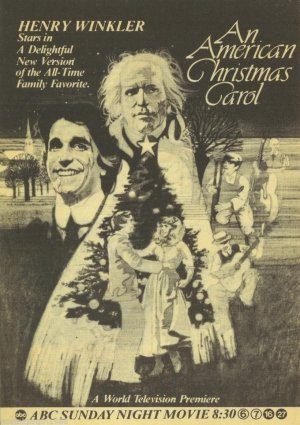 Playwright Jerome Coopersmith’s teleplay obviously strays from the Dickens original, but the heart of the story remains. Here’s how his adaptation plays out:

— As mentioned above, Benedict Slade is an orphan. This eliminates Scrooge’s sister Fan (the person he once was) and nephew Fred (the person he can still become).

— Mr. Fezziwig becomes Mr. Brewster (Chris Wiggins), who hires a young Benedict (he’s maybe ten-ish?) as an apprentice at his furniture factory. Benedict also leaves the orphanage to move in with the Brewster family, becoming a surrogate son to them (just as the Scrooge was with the Fezziwigs, though at an older age)

— Scrooge’s fiancée Belle is now Slade’s fiancée Helen Brewster (Susan Hogan). You know, the daughter of his boss/father figure. No one says it’s weird, so it must be fine. Why not?

— Much like THE WIZARD OF OZ (and a couple other Christmas Carols), the spirits who visit Slade on Christmas Eve are people from his life. Specifically the three whose Christmases he wrecked by taking all their stuff back on Christmas Eve: the orphan keeper (Past), the bookseller (Present), and the farmer (Yet to Come, who talks in this one.)

It’s when Slade reaches adulthood that Coopersmith really strayed from the source material, but what he came up with was really interesting, aligning Slade’s life with changes in American manufacturing.

When Slade grows up, he suggests to Mr. Brewster that they start making their furniture by assembly line. His idea is nixed, and he leaves Brewster Furniture Company (and the Brewsters) to work for a manufacturer who is doing just that. He comes back after a few years and tells Brewster about this great idea called “time payments.” Again Brewster (mercifully) says no. However, Slade’s pitch is overheard by one Jack Latham (Kenneth Pogue as the new Jake Marley), who is very interested in this new way of spreading insolvency to the masses. Their partnership is the the final nail in the coffin of Slade’s morality.

The biggest drawback of AN AMERICAN CHRISTMAS CAROL (aside from the make-up) is that it’s pretty slow moving. Still, it’s streaming on Amazon Prime. So you if you have some time to kill, or just want to have something Christmas-y playing while you’re doing Christmas chores, it’s worth a look. 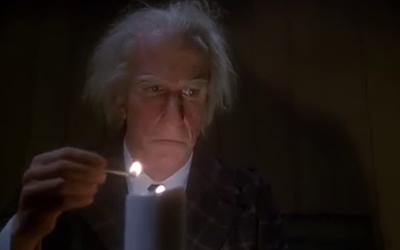 And Speaking of Made-for-TV Movie Adaptations Set in America… 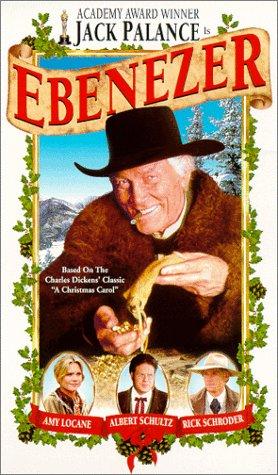 EBENEZER (1998, Ken Jubenvill) resets our story in the Old West. Jack Palance stars as Ebenezer Scrooge (no name change this time) and his performance is a delight. His Scrooge is gleefully evil and the only real reason to seek out EBENEZER. The movie adds two unnecessary characters, Jacob Marlowe’s (née Marley) daughter (CRY-BABY’s Amy Locane), and her fiancé (Parler’s Rick Schroder), for an unnecessary subplot. At least it ends in a shoot-out.