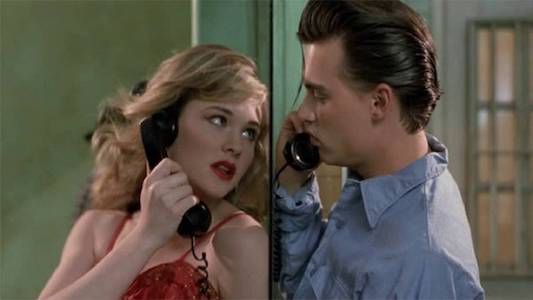 “I’ve always wanted to sell out, but no one wanted to buy me.”
– John Waters

By the time HAIRSPRAY became a smash hit, John Waters had been writing and directing his own films for two decades. Making over four times its $2 million budget during its box office run, the 1960s-set Charm City comedy took Waters’ notoriety and packaged it in with the next, more candy-coated stage of his career. The sea change was coming no matter how the film performed, however; Harris Glenn Milstead, better known as Waters’ childhood friend and greatest muse Divine, passed away less than a month after HAIRSPRAY’s Baltimore premiere. Milstead starred in all of Waters’ feature films besides 1977’s DESPERATE LIVING, and the untimely death was unquestionably the end of an era.

While keeping his sensibilities and attraction to society’s outsiders intact, now Waters was going outside of his Dreamlanders acting stable and hiring Hollywood stars within the traditional studio system. In 1990, this brought us the musical CRY-BABY, which put then-21 Jump Street heartthrob Johnny Depp and pre-Melrose Place Amy Locane into a retro high school landscape. 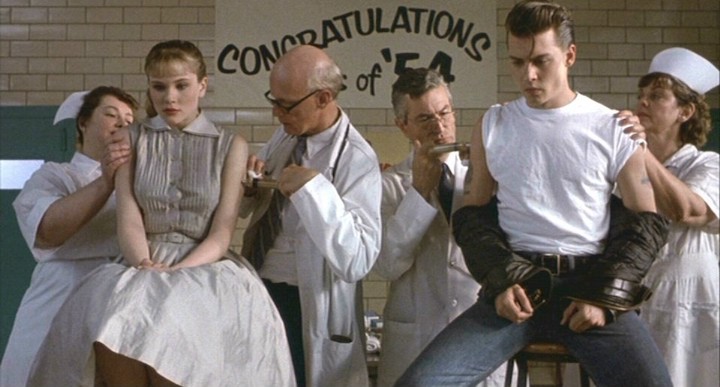 The film plops us smack into 1954 with the cast of sundry high schoolers lining up to receive their polio vaccines—Waters (born in 1946) was a kid when the highly communicable poliomyelitis was in the middle of a huge American outbreak, ”the first disease I ever had to worry about.” From there, we’re introduced (with all the sexual tension teenage hormones and inoculation can provide) to our Drapes and our squares.

Drapes are rockabillies, greasers, the cool folks, the tough kids: the ones who smoke, wear leather jackets, and listen to rock ‘n’ roll. Squares… squares are always squares. You can pop the sexual tension with a needle, and when our protagonist Allison (Locane) intones “I’m so tired of being good” in the scene immediately following, we get it. 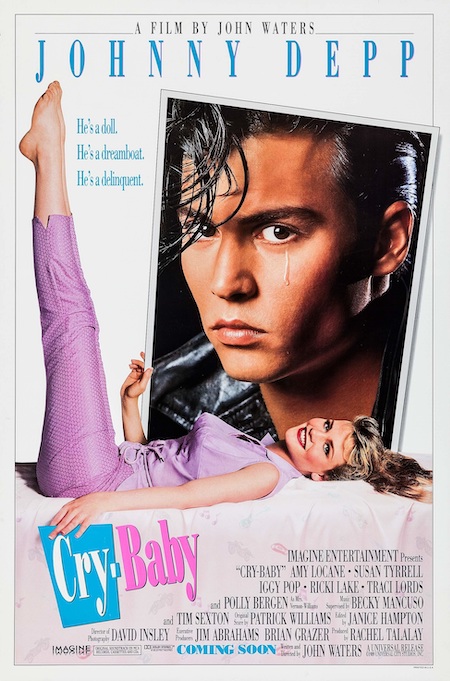 Speaking of being thirsty, the famed homoerotic photography of Bob Mizer was a huge inspiration for how Waters portrayed the Drapes on-screen, most famously Iggy Pop’s limbs akimbo bathtub scene. While CRY-BABY is one of Waters’ most mainstream films, it’s still stuffed full of subversion and kink. Each time anyone cries—whether it’s Cry-Baby Walker (Depp) or otherwise—it’s held for and often framed to a perversely loving degree with no effort to hide that they’re using the old-fashioned, thick glycerin tears. 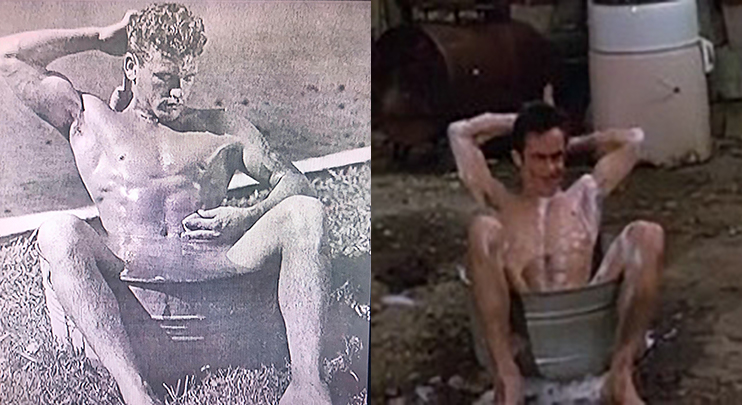 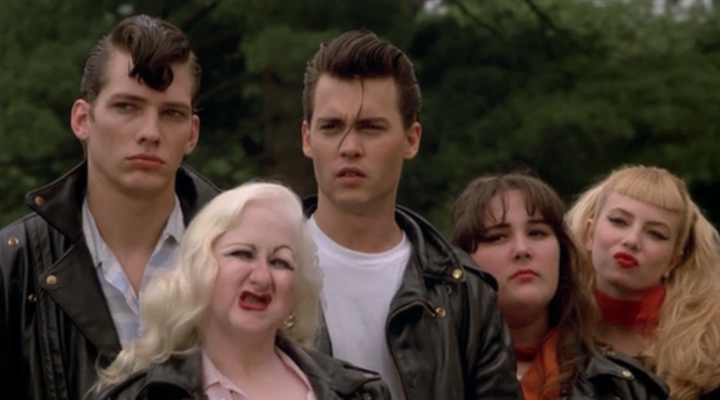 Class is the big theme of CRY-BABY, however, and it uses its teenagers to point out the endless hypocrisy of upper-middle-class suburban life. Juvenile delinquency was a hot topic in the 1950s, largely since the concept of “the teenager” itself was getting its big boom thanks to pop culture specifically targeting them after noticing their spending power and social influence.

Young adults finding their own identities was a deeply terrifying concept to a status quo entrenched in segregation and the strictest idea of gender roles. “Breeding” (a term used to great effect in the film) was a popular dog whistle phrase among the country club set when those who were expected to be easy to control didn’t toe the line. 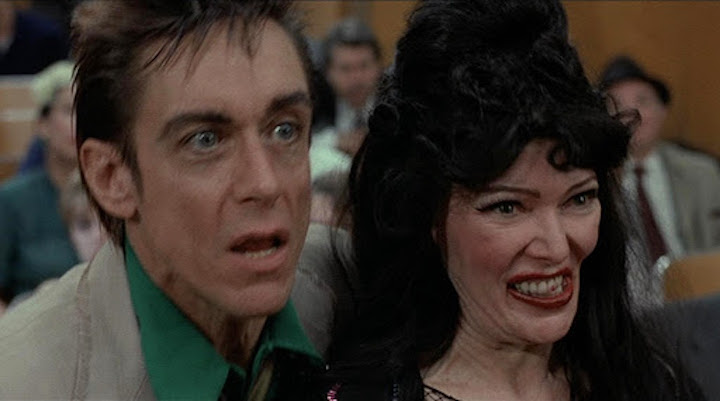 Set that kind of stage, and propaganda touting the dangers of drag racing, homework-skipping, dirty dancing teens destroying the very fabric of society was an easy way to use scare tactics with parents and teachers to keep their kids from thinking for themselves. Unsurprisingly, the exploitation movie circuit jumped on this as well, using some half-hearted hand-wringing at the juvenile delinquency topic as an excuse to show pretty actresses in their twenties stripping boys to their skivvies before stealing their cars and whipping switchblades out of their tight leather outfits at anyone representing the establishment. That’s where the film’s true heart lives. 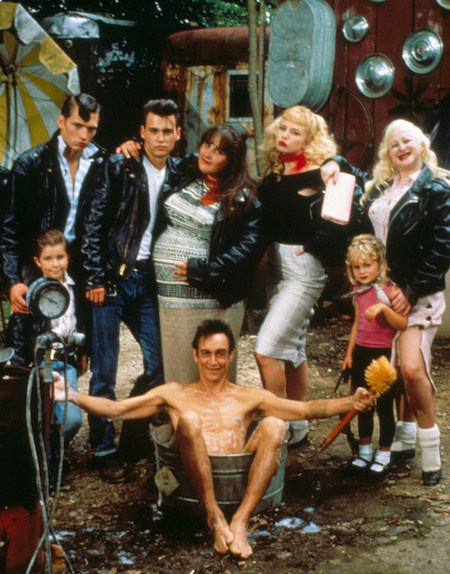 Waters is a master at showing the stifling, eggshell-thin-yet-destructive “white is right” mentality in both an honest and comic way. It’s a good thing, too, as there’s no real room to linger on any particular theme here: Clocking in at just over 80 minutes, CRY-BABY feels even shorter than that thanks to its energetic musical numbers, a plot with places to go and people to meet, and it’s just fun as hell.

With that in mind, showing a group of white bread squares singing a toothless rendition (basically The Crew Cuts version) of The Chords’ “Sh-Boom” at a charm school’s cotillion covers a lot of ground when it comes to setting the cultural atmosphere of 1954 Baltimore. 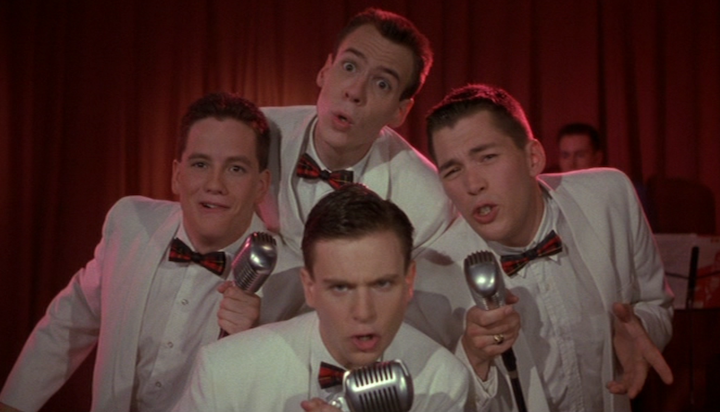 CRY-BABY is a spectacular gateway film for those unfamiliar with John Waters. It’s easy to watch, broad in the best way, the songs are legitimately great, and everything looks beautiful—but it’s still filled with the touches that make John Waters’ films singular. 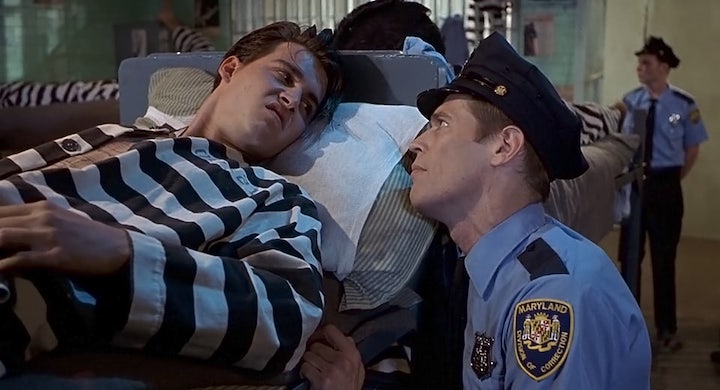 A lovable main character named Hatchet-Face (Kim McGuire) has her own romantic subplot; Susan Tyrrell is wonderfully firing on all Susan Tyrrell cylinders here as biker Drape matriarch Ramona Rickettes; purposely corny Elvis movie special effects are employed; Willem Dafoe has a cameo that includes yelling “God bless Richard Nixon!”; the square grandmother is given a kick-ass character arc, becoming cool herself when in every other movie she’d remain one-note and in the background; there are some terrifying local theme park costumed characters wandering around because why not, and someone gives birth AND gets engaged during a hot road chicken fight.

If there’s not something for you in CRY-BABY, then just beat it, creep. 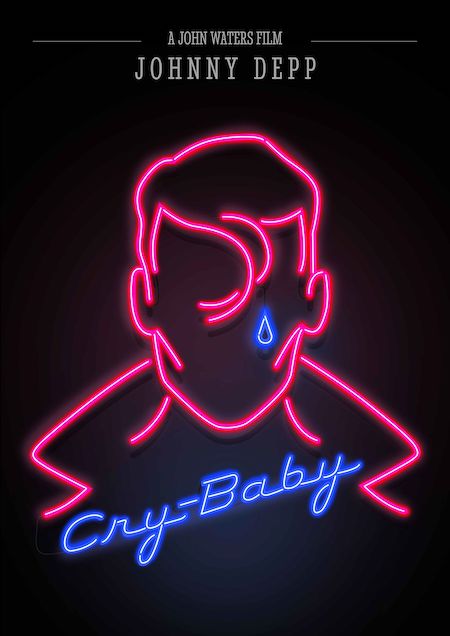