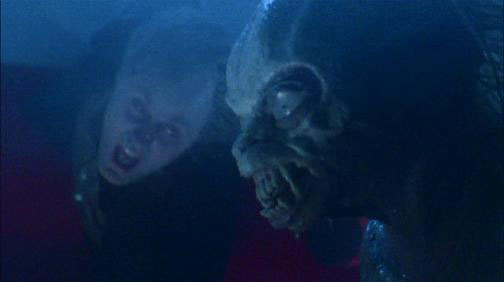 Though its famous today for the death of Vic Morrow and two child actors in an on-set accident (which can be seen in I think the second FACES OF DEATH OF DEATH if you’re into that kind of thing), this anthology flick has stories that range from bad to brilliant. Produced by Steven Spielberg and John Landis, this film remakes three stories from the classic series and has one original tale.

The film begins with a cool intro (though it couldn’t be further from the feeling of the TWILIGHT ZONE television series) where Dan Aykroyd convinces Albert Brooks to pull the car over so he can show him something “really scary.” We then launch into a predictable short from John Landis (an original story) that reveals its intentions a little too early and mutes the potential impact of the story. Vic Morrow puts in a good performance (his last on account of a slight case of decapitation).

Spielberg’s short is next and though it features an always smooth Scatman Crothers, the film is sappy, obvious, and not shot well. Disappointing considering he was coming off RAIDERS and E.T., he set an expectation that he just didn’t deliver on. It’s all really just a warm up for a solid one-two punch of cinematic psychotronic badass. Joe Dante, fresh off THE HOWLING and a couple of POLICE SQUAD episodes, kicks things off with an odd (and oddly touching) short about a telepathic kid that controls his family by projecting Looney Tunes inspired images from his mind. Fun performances and a perfect pay-off make this a quirky tribute to the imagination children run amok.

The best of the bunch is the George Miller remake of the classic gremlin episode that featured William Shatner going nuts on a flight. This one has John Lithgow doing the freak-out at 35,000 feet, easily besting Shatner (not hard to do). If it involved a gremlin with three breasts and the fate of the universe I would give it to Shatner, but Lithgow knows crazy. Miller creates a truly terrifying tale that successfully creates claustrophobic space while diving head-first into a complete and total mental breakdown. This remains one of Lithgow’s best performances.

Though it’s a mixed bag, TWILIGHT ZONE: THE MOVIE is still a fun ride.

You’re traveling through another dimension, a dimension not only of sight and sound but of mind; a journey into a wondrous land whose boundaries are that of imagination. That’s the signpost up ahead—your next stop, the Twilight Zone. —Rod Serling