Sean Weathers is the fucking king

when it comes to Guerrilla Filmmaking.

There are those that embrace the practice, then there is Sean Weathers. I dug HOUSE OF THE DAMNED but I have not yet caught LUST FOR VENGEANCE which looks like it has the Weather touch well in-tact. This press release we just got from MVD kicked us in the geek and we can’t wait to get our hands on these bad boys.

Shot in February 1996, the original House of the Damned marked the directorial debut of Sean Weathers. Inspired by THE RETURN OF THE LIVING DEAD and EVIL DEAD movies as well as THE TWILIGHT ZONE television series, Weathers wanted this film to be something that combined all of the things he enjoyed watching as a kid, shot with an all black cast, which is a first for a film of this genre. 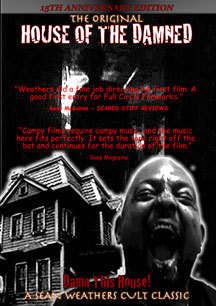 PLOT SUMMARY:
After the gruesome and mysterious murder of her father, Liz goes back home for answers. Only to be greeted by more questions and the horrible possibility that her mother may be the killer. Before Liz can comprehend everything going on around her, she finds that the murder was just a ruse to get her home and that she is the killer’s true target. Things get supernatural and quirky very quickly in this horror comedy. 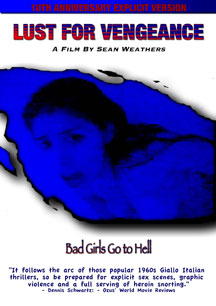 Lust for Vengeance was inspired by Giallo films. Giallo is the name for a distinct set of Italian thrillers from the 60s that combined crime, murder, eroticism, nudity, mystery, and whodunits, with stylish visuals. This concept was adapted in the U.S. into slasher films in the 70s. Lust for Vengeance is the first and only true Giallo film ever made in the U.S. to date.

For the inspiration of this film, Weathers locked himself in a room for over a month watching over one hundred Italian thrillers. He paid close attention to the themes of complex murder mysteries that emphasized stylish visuals, techno scores, the whodunit element, violence, gore, large amounts of melodrama via Italy’s long standing tradition of opera drama. These films also generally include liberal amounts of nudity and sex.

PLOT SUMMARY:
Michael Richards is a rapist and murderer, but in his mind he’s a victim out to get retribution against the women who have wronged him. The film uses the [[sequence approach]] and follows each of the five female leads as opposed to a time-line. The film shifts back and forth to follow the point of view of each of the women as they are stalked and haunted by the blood hunger psychopath. Each sequence shows the women engage in graphic drug use and sex, that both come off very real to the naked eye, and reveals a little bit more of the story before each woman is ultimately “judged” by Michael.