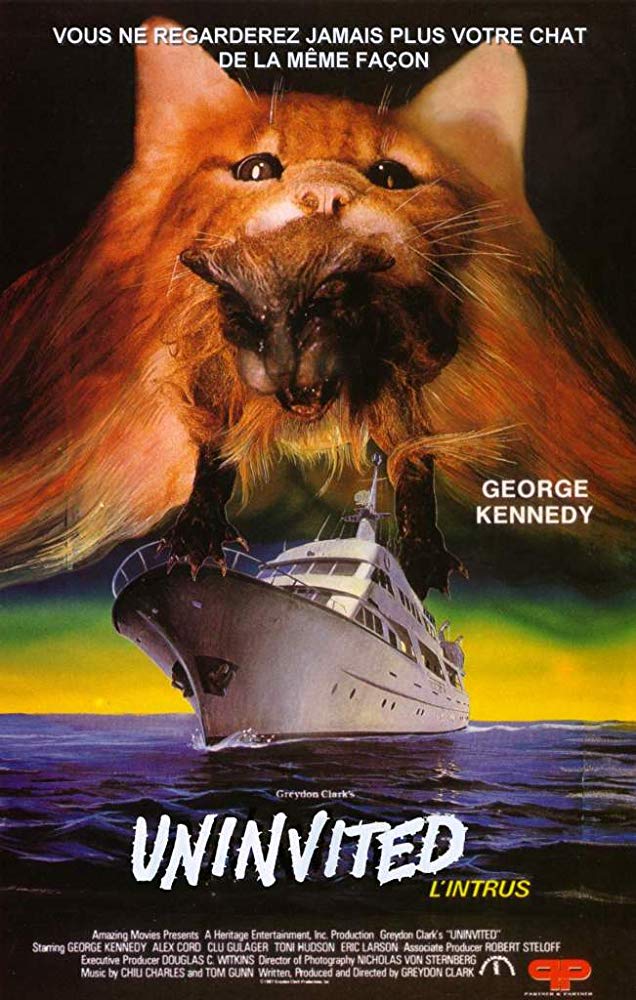 Ah, Spring Break: nothing quite captures the essence of 1980s debauchery quite like a week-long celebration enjoyed by raucous co-eds and MTV VJs alike. It’s no surprise that enterprising (read: exploitative) filmmakers looked to cash in on this resurgent craze throughout the decade. After leaving Crystal Lake, Sean Cunningham headed down to Ft. Lauderdale for the imaginatively titled SPRING BREAK, one of many teen comedies to exploit this fabled ritual of bikinis, booze, and shenanigans. Umberto Lenzi naturally saw this scene as a fit breeding ground for all of this and some slasher mayhem in NIGHTMARE BEACH. But only Greydon Clark imagined this scene to be the perfect staging ground for UNINVITED, a wild tale involving standard issue co-eds, plus criminal yuppies and a killer mutant cat.

Do you really need to know much more than that? If so, I’m afraid to say UNINVITED doesn’t quite live up to its logline, outside of delivering the bare necessity your expectations might conjure.

Because the mutant cat is clearly the star, the film accounts for it during the first scene, where the audience learns it’s the product of science gone haywire. Somewhere in the bowels of a hidden facility, it turns against its masters by escaping into a parking garage and swiftly coughing up a hairball — or at least it looks that way. Actually, it’s hacking up its true, mutated form, which is wearing this muppet cat skin like a suit. After disposing of the panicked scientists wrapped in aluminum foil suits who insist it can’t escape into the world, the cat prowls on over to nearby Ft. Lauderdale, just in time for spring break. 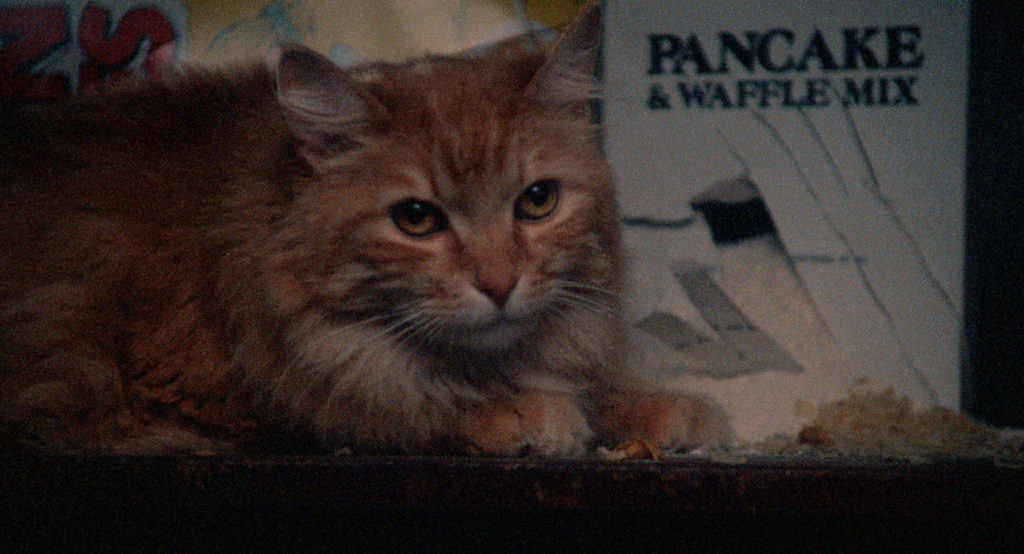 To make an unusually complicated story short, Ft. Lauderdale isn’t just a haven for Bobbie and Suzanne (Claire Carey & Shari Shattuck), a pair of college students who have arrived in town on fumes and no money to their names. Luckily for them, “Wall Street” Walter Graham (Alex Cord) is in town, fleeing from the Securities and Exchange Commission, and he needs some college students on board his yacht to provide cover for his escape to the Cayman Islands. They happily come aboard alongside a trio of meatheads and one conspicuous feline that proceeds to lay waste to these well laid plans.

UNINVITED lurches ahead from this point, content to unfold as one might expect given the formula at play. The kids are degenerates, their adult scumbag counterparts prove to be even bigger scumbags, and the cat dutifully tears through all of them. By generously smashing together three different movies, Clark has a lot to work with in terms of absolute nonsense but only skims the surface of most of it. If this were a straightforward teen comedy, it’d be rather tame since this bunch doesn’t do anything especially ribald besides casually hook up, leaving one to feel like such third wheel that he announces he “feels like Woody Allen”— whatever that’s supposed to mean. It doesn’t bode well that this might be the most memorable dialogue exchange in the entire movie.

In fact, the adults largely upstage them at every turn. Not only is Cord a despicable distillation of yuppie scum, but he’s also flanked by a couple of notable flunkies in George Kennedy and Clu Gulager.  At his best, Kennedy simply looks bemused or bored by the whole ordeal; at his worst, he looks downright contemptuous of being there. It’s easy to imagine him grumbling between takes, trying to convince the crew to film his inevitable death scene so he can leave at his earliest convenience. Gulager, on the other hand, absolutely brings it as Albert, a nebbish goon tasked with his boss’s dirty work, like drowning a meddling interloper and disposing of the body. Donning horn-rimmed glasses, an exaggerated overbite, and a skittish disposition, Albert looks like the last person who would get caught up in a money laundering scheme. Hell, he looks like the last person you’d trust to just do your laundry.

But it’s no surprise that this disconnect produces the most interesting thing UNINVITED has to offer. Fresh off of committing murder and skittishly dumping the evidence, he’s somehow trusted to pilot the damn boat — this, despite the fact the boat has an actual, licensed captain (Toni Hudson). To no one’s surprise, it doesn’t work out: Albert gets totally sloshed and merrily veers the boat off course. The sight of Gulager gleefully chugging booze and dancing behind the wheel is just enough to convince you that this nonsense will keep UNINVITED afloat all on its own. You find yourself thinking that you’d spend an entire movie watching this bumbling lout thwart his cohort’s schemes. Naturally, the mutant cat makes him the first on-board victim, ensuring that he doesn’t make it past the first reel here. 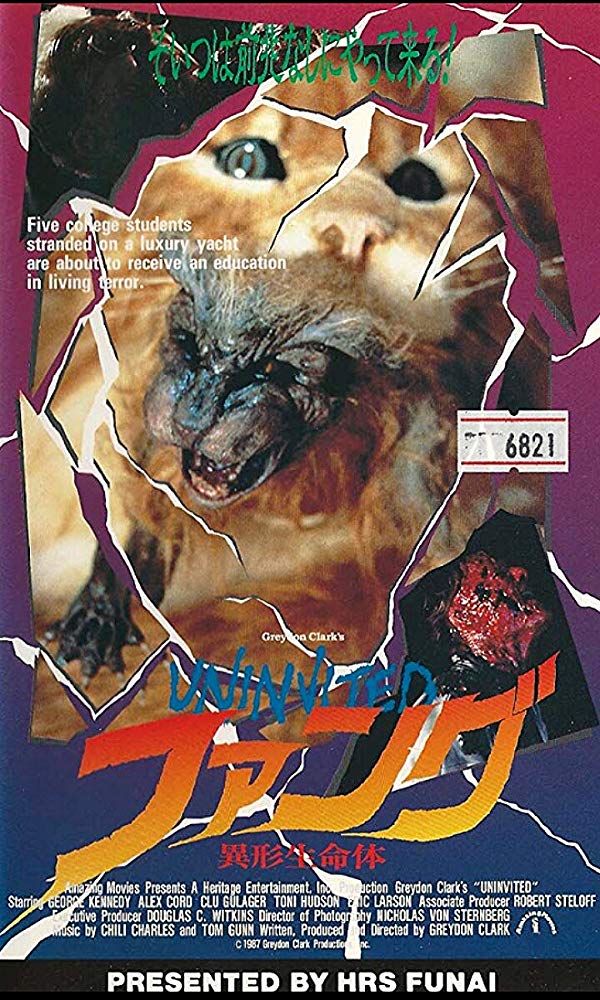 After this disappointing turn of events, UNINVITED fares decently as creature feature schlock, even if most of the entertainment feels inadvertent. Watching grown-ass adults wrestle with an obvious puppet has its charms, and you can’t help but have some begrudging respect for any movie that features a monster essentially vomiting up its true form. It’s even more impressive when the filmmakers clearly don’t have the necessary resources to pull it off, but I’ll be damned if Clark doesn’t do his best to mold some cheap thrills out of grit, latex, karo syrup, and, most importantly, a total lack of shame.

He rightfully assumes that there will always be an audience that’ll lap up this sort of thing and just go with it — and so he does as well, imagining one absurd feline frenzy after another. At a certain point, watching this ragtag (and, eventually, mutinous) crew toss bodies overboard becomes a sight gag that practically invites you to abandon any pretense of giving a damn about anything beyond this oversized hellcat wrecking shit. Never mind that this mostly involves an obvious miniature boat and overdramatic, happy-to-be-there actors wildly thrashing about beneath a rain machine.

Clark follows these deranged whims all the way to its diabolically bleak ending, one that’s only outdone by the alternate ending he dreamed up for the international cut. Getting there (in either cut) isn’t always thrilling: in the Greydon Clark tradition, UNINVITED is a rickety vessel that feels in danger of capsizing any moment but somehow stays afloat thanks to some inspired outbursts. Plus, at the end of the day, it’s a movie where Clu Gulager gets sauced and inadvertently sends a bunch of dolts to their doom at the claws of a mutant cat. What are you going to do, not watch it? 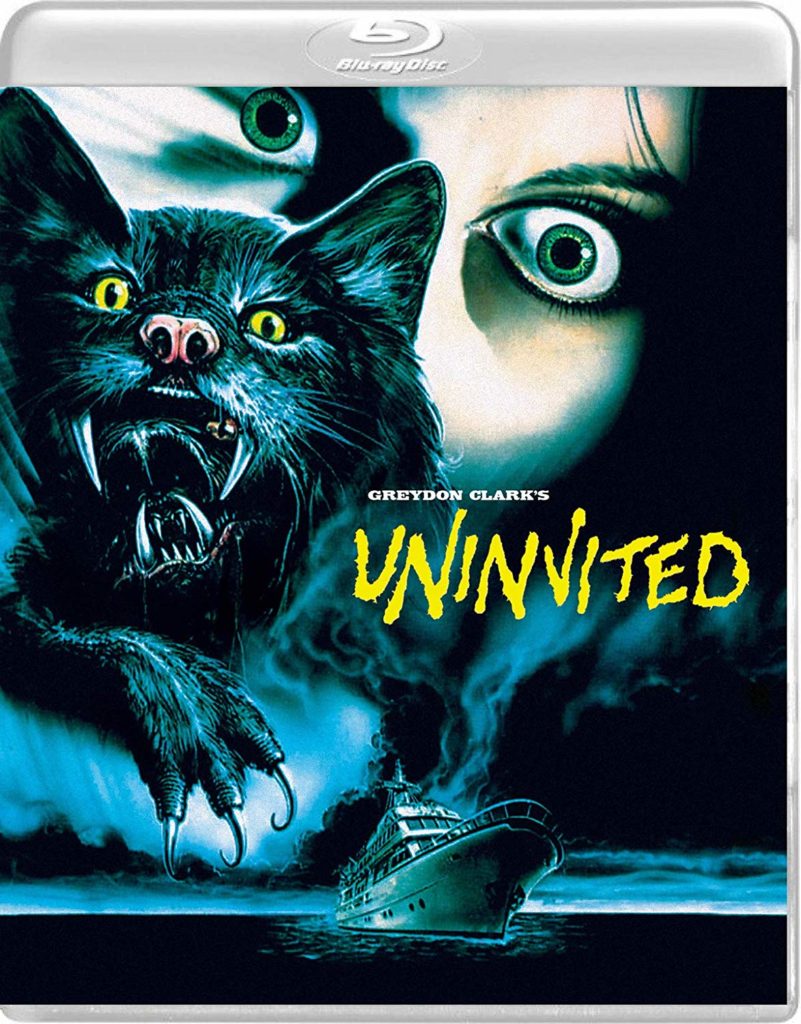 For several years, North American audiences haven’t had many opportunities to even give it a look.  While UNINVITED did show up as part of a double feature DVD alongside MUTANT, the release was hardly anything to write home about. Righting the ship now is Vinegar Syndrome’s terrific Blu-ray/DVD combo release that restores the U.S. theatrical cut to its original 1.85:1 aspect ratio with a sterling 4K transfer that must feel like a revelation for anyone who knows this one primarily from VHS releases.

Vinegar Syndrome’s supplements are perhaps a bit sparse by their standards, though they did nab Clark to record a feature commentary. Cinematographer Nicholas von Sternberg also appears in a 10-minute interview, wherein he discusses his recollection about the film’s production. No stranger to the cult scene after serving as the DP on the likes of DOLEMITE, TOURIST TRAP, and JOYSTICKS, von Sternberg has a few insightful anecdotes and fond memories.  Perhaps the most intriguing supplement here is the full, 93-minute international cut, which features a handful of alternate and extra scenes, some gratuitous nudity, and an entirely different (and superior) final scene.  Truth be told, this is the cut you want to watch, even if the transfer here isn’t quite as sharp as the one for the U.S. cut.

A trailer and reversible artwork are nice extras too for this long overdue release: given its premise (to my knowledge, it remains the only movie where a cat hurls up another cat), UNINVITED has attained some notoriety over the years, and this edition allows it to purr, slink, and claw its way into your heart.