Eddie Murphy, who’s last film—the tepid tearjerker MR. CHURCH—went all but unnoticed in 2016 will be returning to the big screen as Rudy Ray Moore, Dolemite himself in a biopic from Netflix.

The film begins production June 12th with Craig Brewer (HUSTLE AND FLOW) directing a script from Scott Alexander and Larry Karaszewski, the scribes behind ED WOOD and THE PEOPLE VS. LARRY FLYNT.

A former preacher and nightclub dancer, Moore served in an entertainment unit in Germany during his time in the U.S. Army. While Moore was working in a Hollywood record store, a local man by the name of Rico began recounting tales of a pimp by the name of “Dolemite.” Moore took on the persona of the character in his filthy, nasty, raunchy, and outrageously funny act. The film DOLEMITE was released in 1975 and followed up by THE HUMAN TORNADO in 1976. Two later sequels—THE RETURN OF DOLEMITE and SHAOLIN DOLEMITE—emerged in the 2000s. 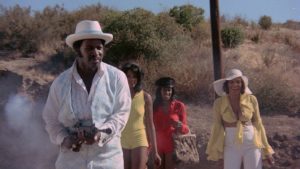 Fans of Eddie Murphy have long been waiting for the comedian and actor to make a comeback. So much of Murphy’s persona throughout the ’80s was attached to “the fuck you man’s”  raunchy material that his late era, that his family friendly output has turned off audiences that discovered him through 48 HOURS, RAW, and BEVERLY HILLS COP. This may be the closest Eddie Murphy will come to a return to stand up (playing a comedian he idolized), and it being a biopic, it may even garner Murphy that Oscar he’s been gunning for since DREAMGIRLS. A Rudy Ray Moore biopic seems like it may be the perfect vehicle for an Eddie Murphy return, splitting the difference between “based on a true story” prestige and, of course, lots and lots of cursing.

An unnamed source close to DAILY GRINDHOUSE who is familiar with the location scouting of the movie has stated they are “interested in keeping the film as close to the source material as possible” having found the puddle (sans water) from THE HUMAN TORNADO and the prison from the original film. The production team has been scouring Los Angeles for all the original DOLEMITE locations, many of which still exist.