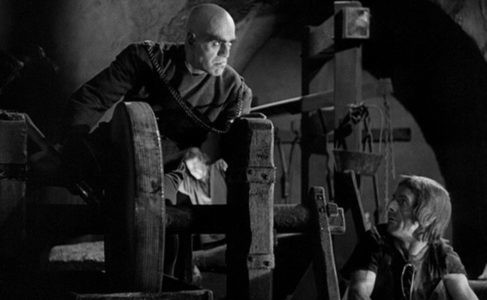 It does not live up to the high standards of the first volume in this ongoing series, but Scream Factory’s Universal Horror Collection: Volume 3 set is still an overall step-up from the second volume, even if there is little in the way of connective tissue between the individual films collected here. 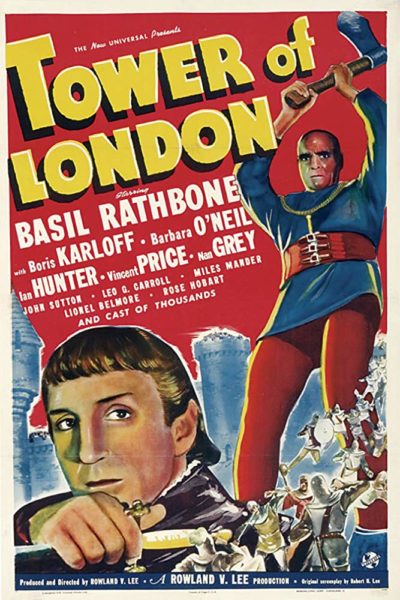 While not a horror film in the traditional sense, the 1939 version of TOWER OF LONDON does not shy away from the horrific moments of torture, murder, and madness that marked the rise of Richard, Duke of Gloucester (Basil Rathbone) to becoming King Richard III of England in 1483. Despite the dark subject matter and focus on the macabre in the film, the inclusion of what is mostly a suspenseful historical drama in this set more likely has to do with the presence of horror legends Rathbone, Boris Karloff, and Vincent Price. 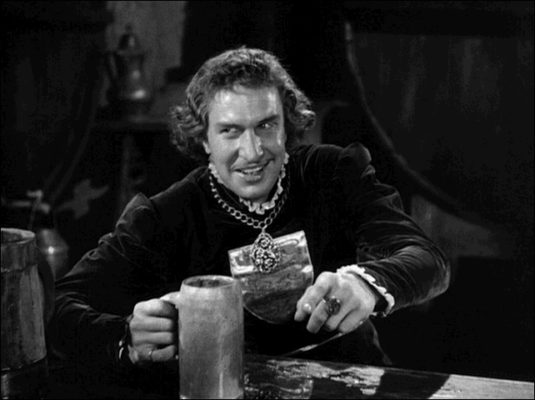 TOWER OF LONDON is not an adaptation of Shakespeare’s Richard III; instead it is a loose dramatization of actual historical events…with an emphasis on torture chambers, beheadings, and fratricide. Where the Bard made Richard a hunchbacked degenerate, Rathbone’s take on the character is a mix of oily charm and cunning ruthlessness as he uses his loyal, sadistic right-hand man Mord (Karloff) to eliminate everyone who stands before him in line for the throne. As a history lesson, it more or less follows events as they happened, but thankfully the screenplay by Robert N. Lee and the direction by Rowland V. Lee focuses in on the backstabbing intrigue, violence, and dark humor of it all. 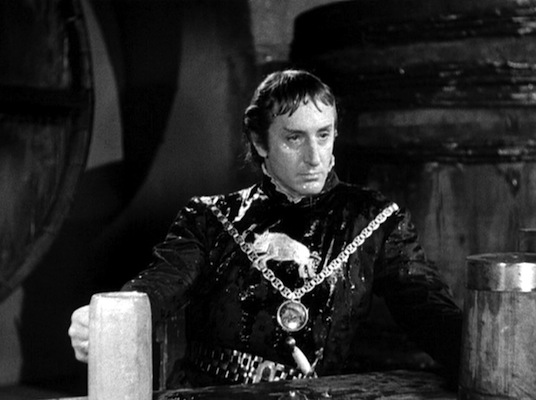 Rathbone and Karloff make for a terrific villainous duo and the uncompromising nature that the filmmakers take when it comes to portraying the more awful things they do makes TOWER OF LONDON the best film in this set. 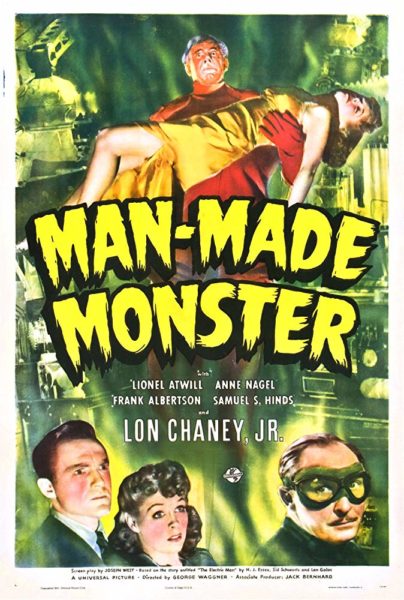 The second film in the set, 1941’s MAN MADE MONSTER, is a straightforward mad scientist flick that is most notable for marking Lon Chaney Jr.’s first turn as a horror star (it was released eight months before THE WOLF MAN). While Chaney is fine as a lovable doofus who has unwittingly made himself “immune” to electricity through his sideshow act, it is Lionel Atwill who steals the show as the crazed scientist seeking to create a race of super soldiers through the use of electrical shocks. 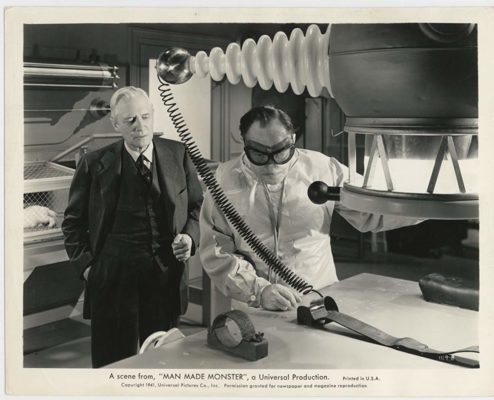 Director George Waggner uses miniature work to stage an impressive bus wreck on a rainy night to kick things off, but he quickly throttles back on the ambition, allowing MAN MADE MONSTER to become another overly talky series of two shots of characters explaining the plot to each other. But even within these constraints, Atwill manages to have fun; injecting bug-eyed intensity to scenes as he cheerfully admits to anyone who will listen that he is, indeed, insane. 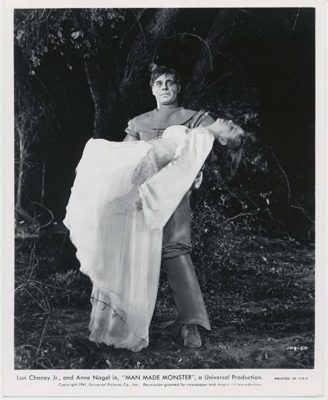 An effective ending with some atmospheric shots of Chaney trudging across the countryside in a heavy rubber suit provides the kind of FRANKENSTEIN vibes that I’m sure the studio expected from such a similar mad scientist tale. Combined with Atwill’s semi-unhinged performance, this ending pushes MAN MADE MONSTER into the “good enough” category of this period of Universal horror. And dig the final image of Chaney’s character that foreshadows the release of THE WOLF MAN later that year. 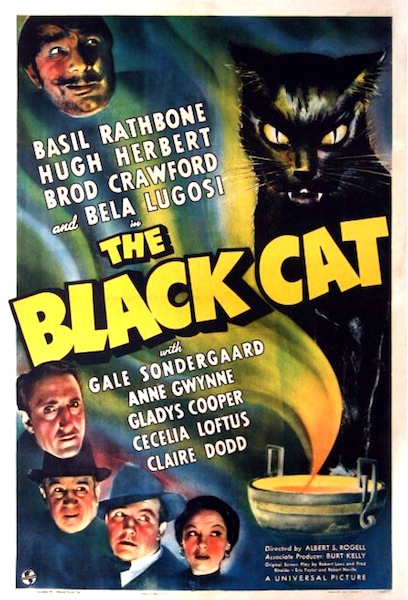 Maybe some day I will watch all the film adaptations of Edgar Allan Poe’s The Black Cat and write about how little they all have to do with his actual short story. This 1941 version is the second one produced by Universal that was “inspired by” Poe’s work. Not surprisingly, it does not come close to living up to the heights of madness and horror of the 1934 version starring Bela Lugosi and Boris Karloff that was directed by low-budget master Edgar G. Ulmer. That said, this version (also featuring Lugosi) is a diverting murder mystery with an impressive cast that only really stumbles when it comes to some poorly aged comic relief.

A darkly arch tone runs through THE BLACK CAT as a family of greedy, genuinely unpleasant brats sit around waiting for their elderly mother/grandmother to die so they can inherit her estate, including her massive home full of antiques. When the old woman dies at the end of the first act after revealing the contents of her will to her family, it is only an opportunistic real estate agent (Broderick Crawford) who believes foul play was involved and is determined to get to the bottom of things. 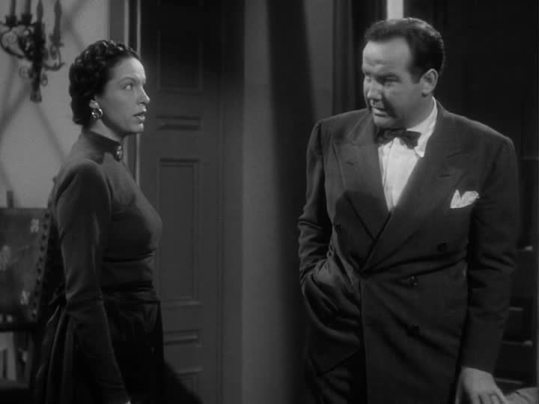 The cast rounding out the family/pool of suspects is what makes THE BLACK CAT really worth watching. Basil Rathbone is underused, but his oily menace still comes through as the most authoritative (and debt-ridden) of the family members. Universal horror veteran Anne Gwynne seems to relish the chance to play a femme fatale for a change and really has fun with the role. But it is Gale Sondergaard as the housekeeper going completely off the rails with madness who steals this one, turning up her performance to eleven as she calls out the family’s ugly greed with pure glee. 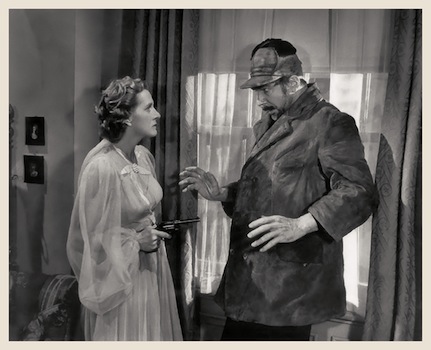 The presence of a stage comedian providing obnoxious comic relief was a big part of the formula for many of these second-tier Universal horror films of the time. While Hugh Herbert in THE BLACK CAT does not quite take the dubious prize of being the most disruptive member of this club (Charlie Ruggles in MURDERS IN THE ZOO arguably still holds that honor), his “sell it to the back row” performance here stops the film in its tracks every time he shows up. Sondergaard’s over-the-top turn and Lugosi’s under-used voyeuristic handyman are more effective comic relief for their sheer weirdness than anything Herbert does, making his inclusion an unnecessary intrusion.

Despite its missteps, THE BLACK CAT stands out as a much better than average entry in the “old dark house” genre of murder mystery. Its mostly excellent cast (including a young, pre-fame Alan Ladd), some witty dialogue, and surprisingly gruesome touches make it worth checking out. 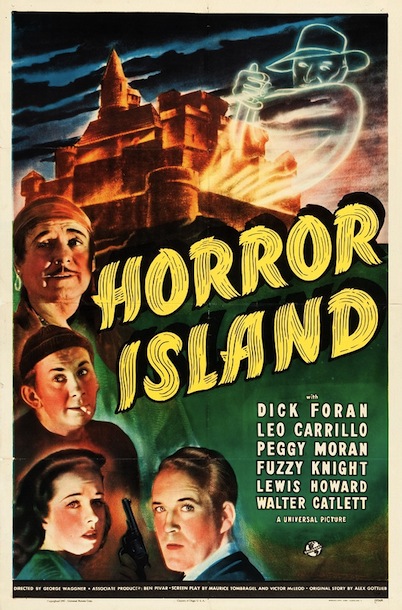 The final film in the set is the misleadingly named HORROR ISLAND, also from 1941. Since the plot eventually includes a couple of murders, I suppose if you squint a little, it could slightly resemble a horror movie. Instead, it is actually a lightly comedic murder mystery that cruises by on the easy charm of its leading man and a couple of fun supporting performances.

Struggling entrepreneur Bill Martin (Dick Foran) and his sidekick/business partner “Stuff” Oliver (Fuzzy Knight) are approached by a stranger they eventually just refer to as “The Skipper” (Leo Carrillo). The Skipper is in possession of half of a pirate treasure map and he believes that the treasure is buried on an island that Bill has inherited. Bill doesn’t believe the goofy story for a second, but it does give him the idea to start a tourist business to take people on “actual” treasure hunts to the island. With a boat full of archetypical supporting characters, he heads to the island only to discover that a mystery figure has the other half of The Skipper’s map and is willing to kill to find the treasure. 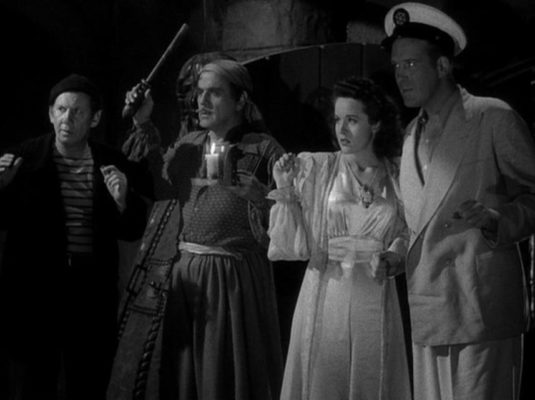 The script by Maurice Tombragel and Victor McLeod is just as slight as that narrative I described, but at the same time feels over-stuffed with subplots about Bill’s flirtatious relationship with heiress Wendy Creighton (Peggy Moran)—one of the tourists, a couple of tough talking criminal types using the treasure hunt as a way to escape the authorities, and the antics of a mild-mannered professor (Hobart Cavanaugh) who tends to sleepwalk at the most inopportune times.

Director George Waggner tries to corral all of this would-be chaos into a screwball farce. His efforts more or less pay off in a breezy comedy that wisely leans heavily on the chemistry between Foran and Moran and fun (for a change) comic relief provided by Knight and Carrillo.

But despite the measured charms of HORROR ISLAND, it is a hard movie to recommend as it quickly slips from the mind within minutes of watching it. It lacks the kind of macabre imagery and twisted humor present in the other films in this set and fails to land much of an impact. It is a pleasant enough diversion, but its inclusion in Volume 3 is a real head-scratcher.

When you take into account the age of these movies, the transfers here are astonishingly good. TOWER OF LONDON especially pops with a new 2K scan of a fine grain print that shows off just how lavish a production it was. Only THE BLACK CAT and HORROR ISLAND have theatrical trailers included, but all the films get new commentaries from film historians. 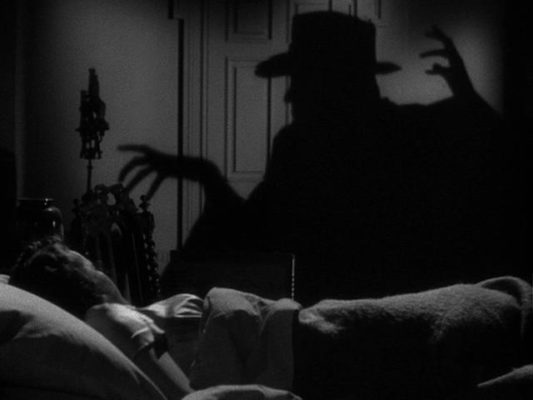 On TOWER OF LONDON, Steve Haberman does a wide-ranging, informative talk. He dives into the ways the film differs from Shakespeare’s take on Richard III, actually hewing closer to real events; digs into the careers of the talented cast; and even talks a little about Roger Corman’s ’60s remake that also starred Vincent Price.

Tom Weaver and Constantine Nasr collaborate on a track for MAN MADE MONSTER that highlights their affection for the weird little movie. Their well-researched talk digs into the careers of Chaney Jr. and George Waggner and has the fun added bonus of their informal poll of several veteran monster film lovers about their favorite Chaney Jr. films. 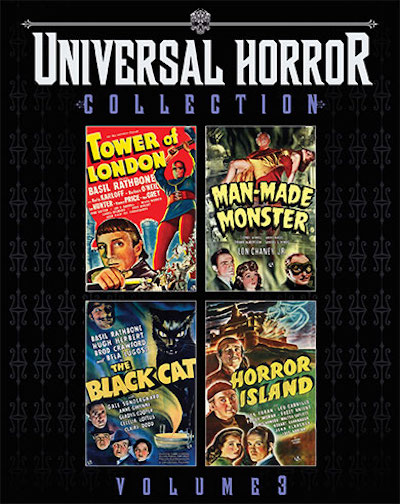 The commentary by Gary D. Rhodes on THE BLACK CAT is packed with details, but eventually becomes too dry for such a playful film. Rhodes spends a bit too much time reading long sections of production notes and articles from the trades that covered the production and its release. If you are a hardcore fan of the film and want to know about the day-to-day, nitty gritty details of each day’s shoot, this is the commentary for you, but for the viewer with casual interest, it is an easy one to skip.

Ted Newsom’s talk on HORROR ISLAND is loose, yet informative. He gives context to the film’s standing as a typical lower half of a double bill at the time, providing interesting tidbits about the careers of the cast members (and some unexpected personal details about Foran and Carrillo). Much like the movie, it’s quick and fun without ever digging too deep.