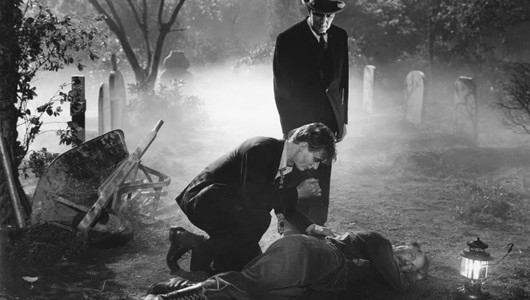 The first volume in Scream Factory’s Universal Horror Collection, made up of four collaborations between Boris Karloff and Bela Lugosi, was a hard act to follow. While a drop off in the quality of films was to be expected, I did not anticipate such a precipitous decline with Volume Two. That said, while the films in this set never come close to living up the first volume’s high water mark of THE BLACK CAT, there are some good moments to be found here and there in this set—most of them courtesy of longtime character actor Lionel Atwill.

The set kicks off with the tonally bizarre and downright grisly (for the time) MURDERS IN THE ZOO. 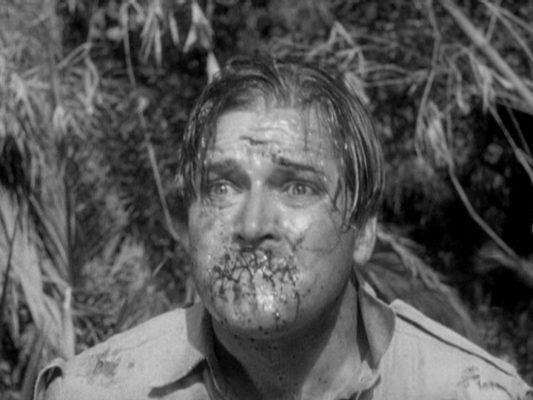 The film opens with a sequence that throws down the gauntlet when it comes to challenging the still-new Hays Code. Insanely jealous wild animal enthusiast and millionaire zoo benefactor Eric Gorman sews shut the mouth of a member of his African expedition who dared to try and kiss Gorman’s wife. The moment ends with an unexpected close-up of the man’s frightened, tortured and bloody face, his lips held together by thick pieces of thread. It’s a surprisingly graphic image for the time and is only made more unsettling by the news in the next scene that the victim’s body was later found dismembered, having been savaged by lions. From there, MURDERS IN THE ZOO almost inevitably becomes slightly disappointing. After all, it’s hard to top that kind of opening shock.

While Atwill’s villainous Gorman is clearly the protagonist, driving the plot forward as a frighteningly mad genius, comedian Charlie Ruggles is top-billed. Ruggles was a star at the time from his Broadway career and had segued into films as a comedic star with a consistently befuddled persona. His presence in MURDERS AT THE ZOO hamstrings the movie, cutting off any suspenseful/sinister momentum that director Edward Sutherland and Atwill are able build up every ten minutes or so. 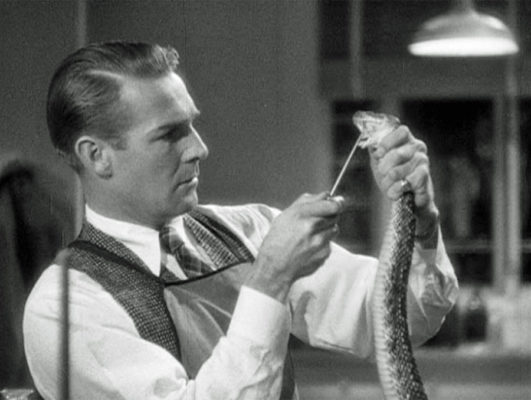 Despite some memorable moments involving escaped zoo animals rampaging, a giant boa constrictor choking the life out of its victim, and Gorman cold-bloodedly pushing another unlucky character into an alligator pond, MURDERS IN THE ZOO is unable to overcome the clunky insertion of Ruggles’ brand of mugging-for-the-camera comedy. It’s too bad that an early turn by a charmingly earnest Randolph Scott, the live-wire presence of Kathleen Burke (best known as the Panther Woman in ISLAND OF LOST SOULS), and Atwill’s devilish performance are wasted in the pursuit of unnecessary comedy. 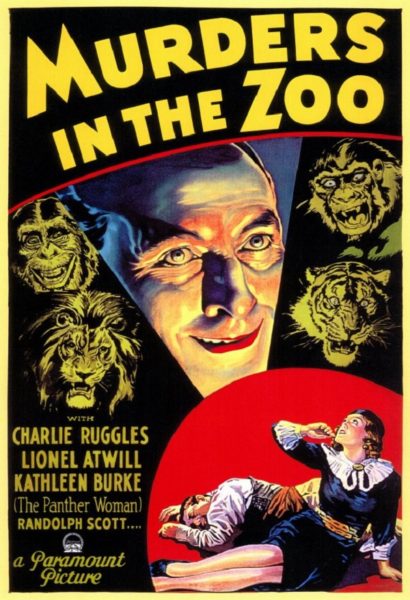 THE MAD DOCTOR OF MARKET STREET is the next film in the set, and while it does not reach the high of a few of the MURDER IN THE ZOO sequences, it does maintain a more cohesive tone, allowing it to become a watchable mad scientist flick with some dollops of kitchen sink melodrama thrown in for good measure. 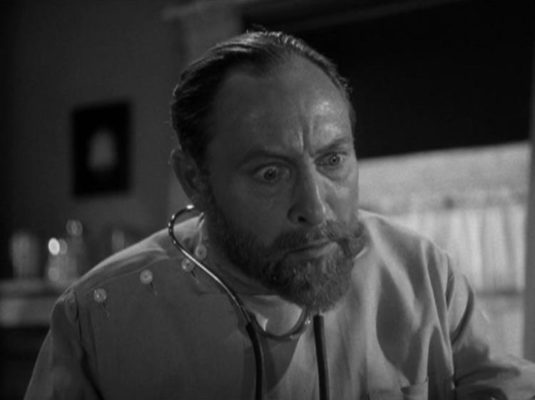 Atwill again plays a madman—this time, driven scientist Dr. Ralph Benson. After a failed experiment leaves a man dead, Benson jumps an ocean liner bound for New Zealand. When the ship sinks, leaving Benson and four fellow passengers stranded on a remote jungle island, they seem destined to meet a quick end at the hands of the defensive natives on the island. But Benson uses a shot of adrenaline form his medical bag to bring one of the ailing natives back to life following a heart attack and is suddenly revered as a god. While that spells relief in the short term for the other survivors, things quickly go sinister when Benson turns his suddenly lascivious gaze upon fellow castaway Patricia (Claire Dodd) and uses his sway with the islanders to make her his bride. 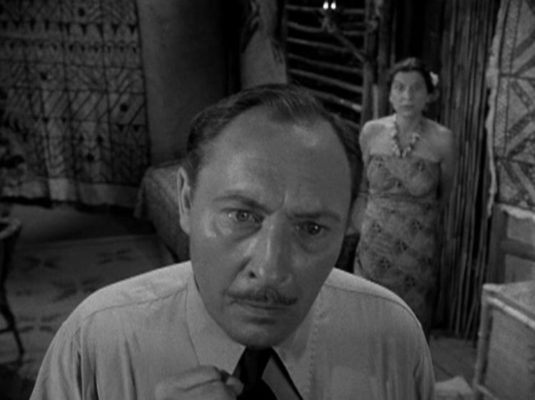 Aside from Atwill’s sweaty, twitchy performance as the depraved Benson, there is very little that is memorable about THE MAD DOCTOR OF MARKET STREET. But it is an efficient and relatively entertaining diversion, even if it has the usual cringe-inducing moments of films from this era when dealing with indigenous peoples. 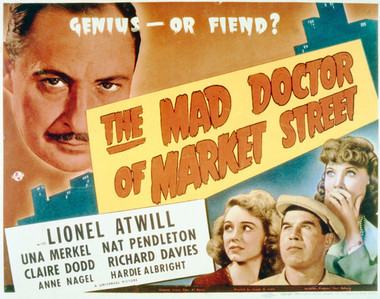 The inclusion of THE STRANGE CASE OF DR. RX in this set is a bit of a confusing choice. Only through the most generous of descriptions can it be called a horror film. That said, as a breezy spin on the more hardboiled detective fiction of Raymond Chandler, it’s a diverting bit of fluff.

Dirty rotten gangsters who keep getting acquitted in court are being murdered by a mysterious figure who takes credit for the deaths in notes that are signed “Dr. Rx.” The flustered pair of cops (Including one played by Shemp Howard!) working the case try to get brilliant private detective Jerry Church (Patric Knowles) to help them out with their investigation, but he turns them down, saying he’s out of the business. But when Dudley Crispin (Samuel S. Hinds), the attorney who defended the victims, comes calling, he makes Church an offer that’s too good to turn down. 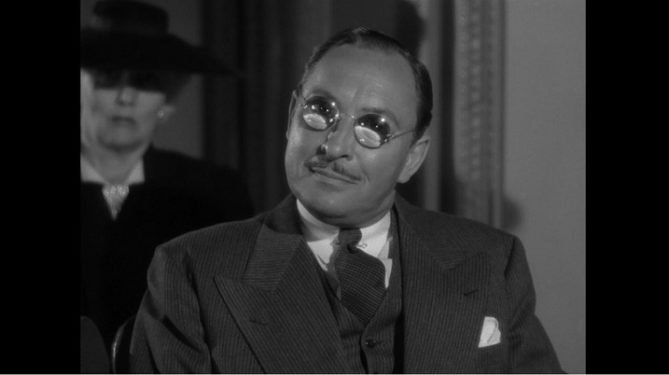 Once on the case, Church is joined by a “Gal Friday” love interest in Kit (Anne Gwynne) and his comic relief housekeeper Horatio (Mantan Moreland) in the investigation. Along the way, he encounters gangsters who are just as eager to find out who the mysterious Dr. Rx is, Crispin’s oddly paranoid family, and a strange doctor named Fish (Atwill) who constantly seems to be lurking about the scenes of the crime. 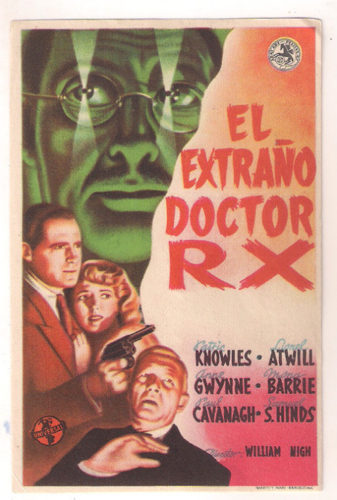 The mystery behind the identity of the killer is not a difficult one to figure out, but Knowles and Gwynne have fun chemistry, carrying a lot of the momentum of the film on their back-and-forth flirtations. There is even more for Moreland to do here other than act as the usual wide-eyed, frightened African-American comic relief. He gets a couple of fun scenes with Howard, trading on each performer’s quite good comic timing. 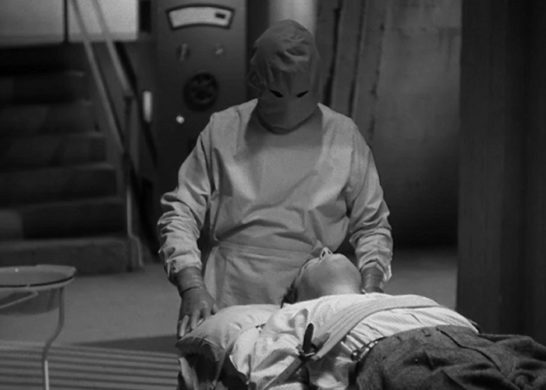 Even with the positives on display in THE STRANGE CASE OF DR. RX, it simply is not a horror film–even with a caged gorilla thrown into the third act. Despite the presence of a sorely underused Atwill, it honestly does not belong in a set billing itself as “Universal Horror.”

No disrespect to Mr. Atwill, but THE MAD GHOUL is the most fiendish and fully entertaining film in this set, despite the fact that he does not appear in it. 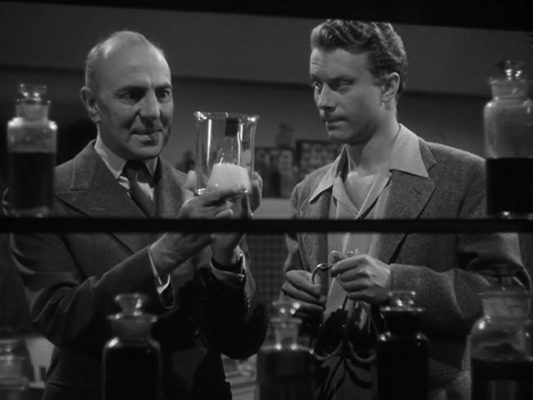 This time, it is longtime horror heavy George Zucco taking on the mad scientist role, but while the film is made up of the typical horror tropes of the era, there is something a little darker at play in THE MAD GHOUL. Zucco’s committed performance is part of it, but director James Hogan and screenwriters Brenda Weisberg and Paul Gangelin dig into what would be truly horrific about the central premise of being a more “traditional” voodoo zombie, forced to obey a master and do horrible things.

In this case, Zucco’s Dr. Morris figures out a way to bring people back from the dead via the ingestion of hearts from recently deceased people. But after trying out this process by killing his loyal student (and promising surgeon) Ted (David Bruce) and successfully resuscitating him, he discovers that the recovery only lasts so long before Ted starts to revert to a walking corpse capable of taking and carrying out Morris’ increasingly demented orders. Before long, the depraved Morris is sending Ted out in increasingly desperate attempts to lure Ted’s former girlfriend Isabel (Evelyn Ankers) into the much older doctor’s arms. 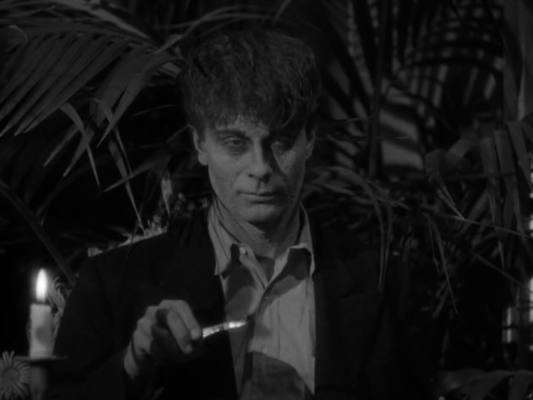 Zucco is tremendous as the doc doubly obsessed with beating death and making Isabel his wife (although sex slave seems more likely, given his instability and mad scientist skills). Bruce is solid and sympathetic as the clueless Ted who is horrified by his violent “dreams,” and the fact that Isabel is pulling away from him. Watching Ted eventually outsmart Morris and bring about his deserved comeuppance is incredibly satisfying, while also surprisingly sad. 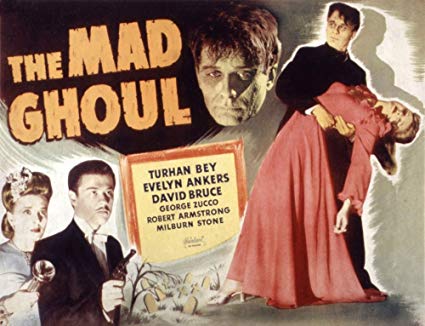 The set is unusually sparse on special features for a Scream Factory release. A commentary for MURDERS IN THE ZOO by film historian Gregory William Mank is quite good as he dives into the career of Lionel Atwill, his eventual downfall, and the horrifying ways in which the finale sequence of the animals running wild went wrong (it’s really not a pretty story). Mank also is the talking head of a featurette about the life and career of Atwill. Much of the information is available in his commentary track, but it is interesting to hear a more in depth look at the scandal that brought Atwill down—especially since it would be considered so mild by modern standards.

Thomas Reeder, an expert on the career of THE MAD GHOUL producer Ben Pivar, provides a commentary tack on that film. At times, Reeder’s commentary track contains interesting nuggets about the film and the career of Zucco, but too much of it is devoted to going over the minutiae of Pivar’s career. This is understandable since Pivar is Reeder’s specialty, but unless you have a very deep fascination with the seemingly uneventful career of a longtime Universal horror movie producer, the commentary track is easily skipped.

All of the films are given predictably solid transfers that look as good as can be expected for their age; with clear audio that amplifies every ear-splitting scream of the leading ladies. Given the lower profile of these films, it’s nice to see them given such a preservation. I just wish the quality of the storytelling on display in this set had been as consistently solid as it (mostly) was in Scream Factory’s first volume of Universal horrors.