Not every adaptation into film needs to be 100% faithful to the source material. There have been tons of successful works that have changed, combined, or left out major narrative elements of stories and characters that audiences love—but the films work just as well. The two main questions one should ask when watching an adapted film is 1) does it capture the essence or spirit of the original story? and 2) is it a good movie? When it comes to VENOM, directed by Ruben Fleischer, the answers are “kinda” and “no, it is not.” While there are moments that honor the inherently silly X-Treme nature of the Spider-Man antihero’s ’90s origins, far too often it is a boring, uninspired piece of cinema that fails to engage or do anything truly entertaining.

Eddie Brock (Tom Hardy) is an investigative reporter that loses his job and his fiancée, Anne (Michelle Williams), when he decides to look into the nefarious underbelly of billionaire Carlton Drake (Riz Ahmed). Months pass and Brock finds himself once again investigating Drake’s shady dealings, this time as it relates to fatally exposing homeless subjects to extraterrestrial creatures known as “symbiotes.” When Brock and Venom, one of the symbiotes, merge, they must work together to survive, escape Drake’s army of cronies, and foil the mad corporate titan’s ultimate evil plan. 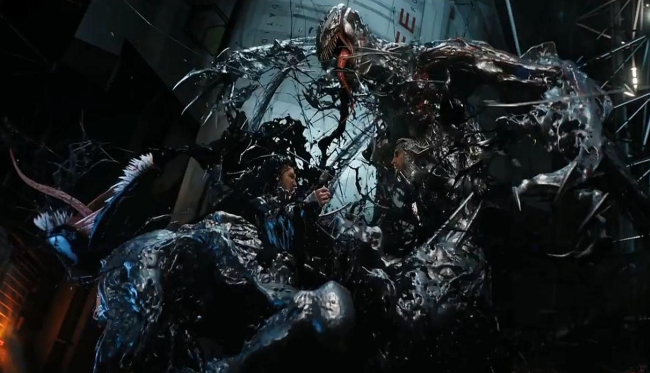 There were a lot of possibilities in telling VENOM—multiple directions that filmmakers could go that would make the movie stand out. It could be an ultraviolent antihero story where the protagonist rips through the city, inflicting pain to many in gruesome ways, but ultimately stopping a greater evil. Or VENOM could’ve been a superhero tale via a weird cerebral body horror story in which Brock and Venom fight over control of the body and explore the weird ways they interact to fight off others. There are a myriad of other possibilities—but instead of something distinct or new that would involve combining various genres, Fleischer and company deliver a completely bland superhero origin film. The action is pedestrian, there are no character arcs to speak of, the comedy is easy (though sometimes winning)—there is nothing that truly works well in VENOM.

Hardy is employing a weird, mush mouth New York accent (his character is from NYC but the movie takes place in San Francisco). He is dedicated to acting foolish and out of sorts as he freaks out about the alien parasite bonding with his biology. But there isn’t a lot for him to do, with dialogue or action or really any defining character traits. Brock goes from a flawed do-gooder that occasionally does the wrong thing for the right reasons to….a flawed antihero that occasionally does bad stuff in the pursuit of doing good. There is no growth, no lesson, nothing; at best there’s an awkward (but intentionally funny) scene where Venom makes Brock apologize to Anne. It doesn’t pay off in any way and doesn’t lead to anything at all, but it’s a feigned attempt at showing some sort of change. 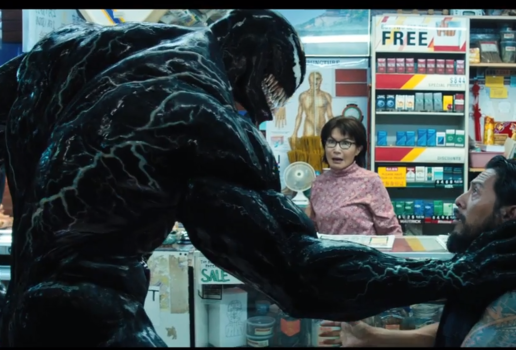 Too much of VENOM is lethargic and feels lacking any sort of charm or energy. There are a few intentionally funny moments that work, but there are also just as many unintentionally funny moments that are pretty funny (lots of serious glancing and awkward phrasing that provides a glimpse of the ludicrous movie it could’ve been). Ultimately, it is a forgettable film that doesn’t properly entertain and feels completely unnecessary. For those looking for a good movie about a charming but flawed bearded white dude working with a presence in his head to take out scores of bad guys, see UPGRADE. And for everyone else, it’s best to avoid getting ensnared in VENOM‘s dull web.