DIRTY DANCING seemed to come out of nowhere in the late summer of 1987. The first national theatrical release for VESTRON PICTURES—an American studio known primarily for direct-to-video horror like WAXWORK—DIRTY DANCING received positive reviews from THE NEW YORK TIMES and Gene Siskel. In 2010, JEZEBEL’s Irin Carmon called the film “a great, brave movie for women.” August was traditionally a dumping ground for studios to put out genre trash and films that they just didn’t know what to do with and DIRTY DANCING became an unexpected hit with adults as well as the teens they were aiming it towards. Fueled by word of mouth, the film became one of the highest grossing films of 1987, raking in $214 million. Not bad for a film with a $6 million dollar budget. (Part of VESTRON PICTURES’ strategy was to cap all of their releases at $6 million when they started to move away from simply distribution to film production).

Growing up, DIRTY DANCING was a staple at many a girls’ sleepover (and boys who didn’t want to admit to enjoying it), sitting nicely aside GREASE, not only for its soapy, romantic tale of love and class struggles, but also because of its oldies revival soundtrack that parents didn’t mind listening to either. The boomer nostalgia that kickstarted in the ‘70s with AMERICAN GRAFFITI, LAVERNE & SHIRLEY, and HAPPY DAYS was beginning to wane by 1987, but the DIRTY DANCING soundtrack breathed new life into that nostalgia craze with its mixture of A.M. radio classics and new tunes inspired by those artists. “(I’ve Had) The Time Of My Life” (featuring Jennifer Warnes and Righteous Brother Bill Medley) and was the big winner off the DIRTY DANCING soundtrack. Penned by John DeNicola, Donald Markowitz, and Franke Previte, “(I’ve Had) The Time Of My Life” topped the Billboard Hot 100 chart as well as the Adult Contemporary chart in addition to winning the Academy Award and Golden Globe for Best Original Song. Even the film’s star Patrick Swayze had a surprising turn, co-writing and performing the power ballad “She’s Like The Wind” that made a dent in the Billboard charts. However, this writer’s favorite tune on the album has always been “Hungry Eyes,” performed by Cleveland’s own Eric Carmen.

Also from the songwriting team of DeNicola and Previte, “Hungry Eyes” finds Carmen making love feel like a matter of life and death, a staple of all the best power pop tunes. Carmen got his start fronting power pop architects The Raspberries. Pete Townshend of The Who coined the term, but the sub-genre can generally be traced back to The Raspberries and Memphis’s Big Star. Big Star’s songs concentrated on longing, a certain sweetness, and plenty of melancholy. The Raspberries, however, brought some sleaze to songs about boys and girls in the Midwest. “I was in high school when ‘Magic Bus’ by the Who came out,” Carmen wrote in the liner notes for his 1997 DEFINITIVE COLLECTION release. “I remember walking down the halls and having guys raise their arms in a rebellious fashion and go, “Hey, Magic Bus!” And I was never quite sure what that meant, but I was fairly sure that everybody thought the song was dirty.”

“I thought that I wanted to write a song like that.”

The Raspberries’ “Go All The Way” blended that sleaziness with sugary harmonies and hooks, firing it up to number 5 on the Billboard Hot 100. (It also became the theme song for this writer’s podcast, DRINKS ON MONDAY WITH THE STRIKE TEAM).

“I noticed that on the Beach Boys’ ‘Pet Sounds’ record they could get away with racy lyrics like that because of how they looked and the melodic way they sang the suggestive stuff,” Carmen explained to CLEVELAND.COM. “They slid it by the censors. So my idea was to put those words in the mouth of the girl. It was a different approach.”

“David Prater told me John had a bunch of cool music and was writing with this girl nicknamed ‘Pantera,’” Previte told AMERICAN SONGWRITER in 2014. “He said there was one really cool song and wanted to play it for me. I said ‘well if I’m going to write lyric and melody to it, I only want to hear the track. I don’t want to hear their lyric and melody.’ That song became “Hungry Eyes.” 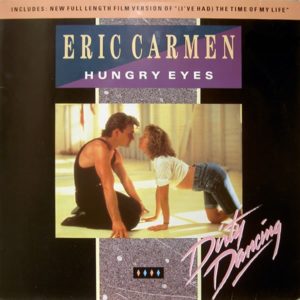 Carmen originally didn’t want to perform the tune. Raspberries producer Jimmy Ienner—who produced the DIRTY DANCING soundtrack—asked Carmen to sing the song for the film, but Carmen was hesitant. “Soundtracks are made all the time that die horrible deaths—even soundtracks for popular movies,” Carmen explained to the L.A.TIMES in 1987. Carmen, along with co-writer Dean Pitchford, penned the love theme “Almost Paradise” for Footloose, but it was performed by Ann Wilson of Heart and Mike Reno of Loverboy. “I wasn’t wild about the idea. Probably no one would ever see it. What good would it do? But I said, ‘What the hell, I’ve got nothing better to do.’” Carmen was consistently putting out records throughout the ‘80s but had not had much chart success since nicking themes from Rachmaninoff for the hit singles “All By Myself” and “Never Gonna Fall In Love Again.”

“I listened to the demo, and I thought, ‘It’s not bad. The chorus could be OK,’” Carmen explained to THE NEWS HERALD in 2014. “I called (him) and said, ‘You sure you don’t want me to write something?’ Carmen did not end up writing a tune for the soundtrack, but did wind up producing “Hungry Eyes” in the end. “There was stuff on it I wanted to fix up,” Carmen told the L.A. TIMES in 1987, “but I had to do it their way to a large extent. I couldn’t change it and make it sound like a different record. I changed what I could–to give the song some guts. Unfortunately, I was locked into that tempo,” he said. But he was able to make some adjustments, including adding a heavy guitar touch “to juice it up.”

“In five days, we recorded the song, mixed, mixed a second time for movie theaters — because they have five speakers — and we were done.”

“Hungry Eyes” was a perfect song for Eric Carmen to sing with its big hooks, a gigantic chorus, and a sense of urgency about affairs of the heart. The songwriters’ tunes with The Raspberries and his solo work blended Phil Spector bombast, Beach Boys melancholy, and the notion that getting laid was a matter of life and death. It’s actually surprising that Carmen didn’t write the tune as it fits so soundly in the singer’s wheelhouse with its careful blend of sleazy come ons and pure pop craftsmanship. It’s worth noting that while some artists have trouble changing with the times (the BEYOND YACHT ROCK  gang would call that “snake charming”), Carmen simply did what he always did: sing bombastic love songs about lust, but simply added ‘80s style production: gated drums, processed guitars, and a sultry sax solo that’s as much a reference to the music of the ‘60s as it became a staple of the Reagan decade. The video oozes ’80s cool even more than a Michelob commercial.

“Hungry Eyes” also garnered a video that found the once bouffanted ‘70s hitmaker with a shorter ‘do, donning a slim, AMERICAN GIGOLO-cum-Robert Palmer suit, walking smoky, neon drenched streets pleading “I need you to see, this love was meant to me.’ The clip also provides viewers with a sight of a sax player, sexier than THE LOST BOYS’ Tim Cappello, dressed to the nines in a slinky, black evening gown and opera gloves. 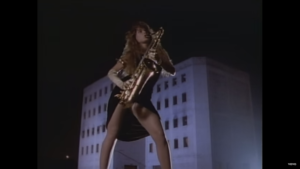 The single was released on November 7, 1987 with Doobie Brother’s vocalist Tom Johnston’s Motown-tinged “Where Are You Tonight” on the B-side (the song was also featured on the DIRTY DANCING soundtrack). “Hungry Eyes” peaked at number 4 on the U.S. Billboard Hot 100 and number 2 on the Adult Contemporary charts. “”Doing that song didn’t seem like the opportunity of a lifetime,” Carmen said in 1987. While “Hungry Eyes” is only featured very briefly in the film, the DIRTY DANCING soundtrack spent 18 weeks at number 1 on the Billboard 200 album sales chart, selling 32 million copies worldwide and has been certified 11 x platinum.

In 2014, Eric Carmen called “Hungry Eyes” “the gift that keeps on giving” 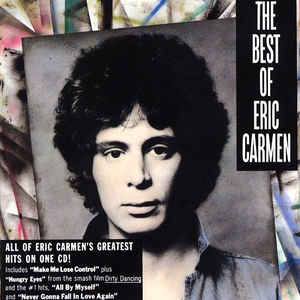 “Hungry Eyes” jumpstarted Carmen’s career, leading him to release his first best of solo record, THE BEST OF ERIC CARMEN. The album also featured “Make Me Lose Control,” an ode to cruising around, listening to the radio, and falling in love (with a video that owes plenty to AMERICAN GRAFFITI, co-written again with Pitchford. Carmen called the song “odd record because it was all by itself. The song wasn’t part of an album, but it was an interesting experience to jump back into the studio with Jimmy Ienner after ten years”

Carmen would once again find success with a late summer soundtrack when The Raspberries’ “Go All The Way” was featured on the soundtrack to Marvel’s GUARDIANS OF THE GALAXY in August of 2014. 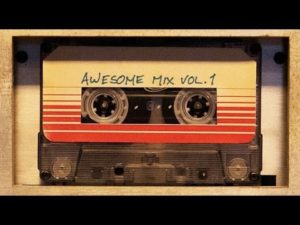 “I waited to see my name in the credits at the end of the movie,” Carmen told CLEVELAND.COM, having taken his teenage children to see the film. “Of course, they were the very last ones you see. My kids couldn’t have cared less.”

Peter Quill would have been around the right age for DIRTY DANCING, perhaps “Hungry Eyes” might get another chance at chart success with GUARDIANS OF THE GALAXY VOL.2.