AMC’s horror only streaming service SHUDDER has already proven itself to be a great boon to horror fans looking for the widest selection possible of macabre cinema from a variety of sources. Staying true to this goal the service has acquired and will be premiering the French found footage film THERAPY on November 17. 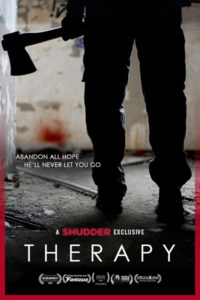 THERAPY is the sophomore effort from young director/writer Nathan Ambrosioni who — at the age of 17 — is looking to inject his own take on the oft explored sub genre of found footage on the heels of festival darling, HOSTILE. The story centers around Jane and Simon, two young police officers who end up in possession of video equipment from an abandoned house thanks to a night watchman. Said video equipment contains footage of a group friends exploring the house after stumbling across it while on a camping trip but suddenly finding themselves preyed upon by an unseen being. Soon the officers find themselves in a race against time to decipher the footage and possibly save the hapless victims from what is lurking in the house…if there is even a chance. We were lucky to enough to be provided an exclusive clip, courtesy of Shudder!

If the clip and the trailer are any indication, THERAPY will definitely be worth a watch for fans of found footage movies and non-fans alike. The sense of dread the clip evokes with just the actual camera footage segments is already enticing, the addition of a parallel story involving cops attempting to save the victims creates a level of tension unique among this kind of genre which typically sticks solely to the first person view from the unfortunate camera operator is just another layer in a deadly mystery. Ambrosioni has already started off strong with HOSTILE and THERAPY seems like it might be able to inject some life in a used and abused sub-genre of horror. This kid is definitely one to watch.

THERAPY is available to watch on SHUDDER right now!