Home  ⁄  The Wire  ⁄  [VESTRON WEEK] Despite A Terrific Cast, SUNDOWN: THE VAMPIRE IN RETREAT Bites Off More Than It Can Chew

For reasons that had more to do with my affection for Bruce Campbell and WAXWORK than the quality of the actual movie, I watched SUNDOWN: THE VAMPIRE IN RETREAT several times during the video store boom. As a follow up to co-writer/director Anthony Hickox’s stand out debut feature, it was definitely no WAXWORK. However, as a low-budget indie horror-comedy, I found it enjoyable. I dug its goofy charm, throwback feel to the old westerns where you knew who was the good guy by the color of his hat, and the high concept idea. For VESTRON WEEK, I thought it would be fun to revisit the film. After all, it was one of the last films the company actually produced before going under. But twenty plus years and a critical eye that cannot help but be a little more cynical after being burned by so many similar films over the years has forced me to look less kindly on the film. 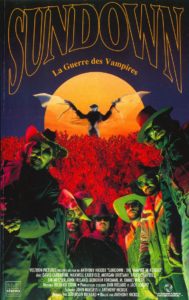 The desert town of Purgatory is populated entirely by vampires. Desperate to escape their undead life of killing and feeding on humans, they have gravitated to the town that is owned by the mysterious, vampiric Count Mardulak (David Carradine). With the aid of high-powered sun block cream (it keeps them from being killed by the sun, but daylight is still a source of severe discomfort) and a manufacturing plant pumping out an experimental synthetic blood, they are staying on the straight-and-narrow—but just barely. 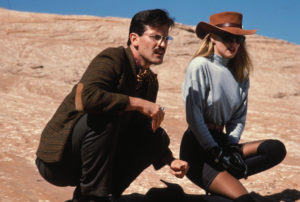 Problems arise in several ways. Mardulak purchased the patent for the synthetic blood from a milquetoast inventor named David Harrison (Jim Metzler). Mardulak had the blood processing plant built to David’s specifications by a vampire engineer named Shane (Maxwell Caulfield), but the plant is only putting out blood at a trickle. At Shane’s suggestion, David is called in to solve the problem. Of course, it just so happens that Shane and David were rivals in college and both dated Sarah (Morgan Brittany), who eventually chose David and married him. Oh, the drama! Meanwhile, Jefferson (Dan Ireland), Mardulak’s second-in-command, is planning an insurrection. Sick of living off the synthetic blood, Jefferson believes the vampires have turned against their natural way of doing things. He quietly goes about planning a revolt with Shane, creating a vampire army on the sly. Oh, and Van Helsing’s great grandson (Bruce Campbell) has tracked Mardulak to Purgatory…and a pair of campers (Dana Ashbrook, Elizabeth Gracen) stumble across the town, further complicating matters…and David’s youngest daughter happens to have psychic abilities…and a beautiful vampire (Deborah Foreman) falls in love at first sight with Van Helsing…and… 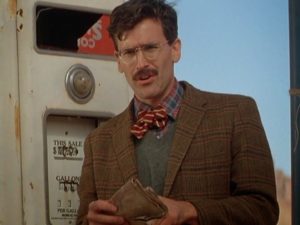 And you get the point. SUNDOWN runs less than 105 minutes but it tries to fit in enough plot for a full season of television. Hickox does not lack for storytelling ambition, but he bites off far more than he can chew with so many plot threads to keep track of and pay off. Tonally, he allows the film to go all over the place, veering from slapstick to horror to melodrama to ’50s B-movie Western—sometimes all within a single scene.

A ridiculously over-qualified cast helps Hickox smooth over some of the more rushed transitions. Campbell mugs reliably as the bumbling comic relief, Foreman is lovely and manages to bring a hint of tragedy to her barely-there role, Metzler puts far more intensity into his pseudo-leading man turn than the film needs—but I give him credit for not phoning it in. Also helping matters are the scene-stealing, veteran character actors populating the margins of the film (M. Emmet Walsh, George ‘Buck’ Flower, John Hancock, Dabs Greer, and a slew of other familiar faces pop up) giving flavor and personality to throwaway roles. 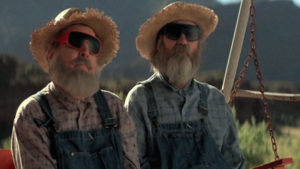 But a good cast can only patch up the film to a point; roughly halfway through, the massive weight of all the plot collapses, suffocating a coherent narrative under the clashing tones and some shoddy editing and cinematography. It’s a shame that SUNDOWN does not work. Hickox and co-writer John Burgess come up with clever touches like wooden bullets that allow for several third act shootouts, the synthetic blood providing the vampires with food, and the idea of a civil war brewing between Mardulak’s followers and the discontented vampires who are drawn to Jefferson’s message of returning to the old way of doing things. If Hickox had just pared down his narrative to one or two plots, the film stood a chance of being a clever genre mash up instead of a complete mess. It also does not help that Carradine largely sleepwalks through his turn as Mardulak. The way the other vampires fear and respect him, he should be charismatic and menacing. Instead, he mostly looks like he is killing time while waiting for his role to wrap. It is an uncharacteristically bland performance from the usually reliable Carradine. I suppose it is no coincidence that the film really starts to suffer when it focuses more on Mardulak in the second and third acts. 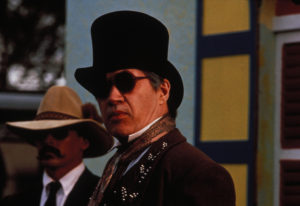 I had high hopes that SUNDOWN would live up to my fond memories of it, but now I see it as a harbinger of what was to come from Hickox as his career progressed. With WAXWORK, he was able to take a low budget and make it an asset by mimicking the look of low-budget films of the past. But his storytelling ambitions quickly outstripped the meager resources he had to work with on SUNDOWN and the film wound up looking almost amateurish at points (undressed sets, scenes going from midday to night in one cut). The same problems would plague WAXWORK II: LOST IN TIME, and continued even as he took the helm of mainstream franchise sequels like HELLRAISER III: HELL ON EARTH and WARLOCK: THE ARMAGEDDON.

It is always a good thing when a filmmaker has ambition. I do not mean for it to sound like I wanted Hickox to settle for a more boring idea. I simply wish he had realized with SUNDOWN (and his subsequent films) that he needed to make his high concept ideas fit into the small budgets with which he was working. It is great when a filmmaker is so conceptually inventive, but it is frustrating for the viewer when they are unable to execute that concept for more than half of the film.