The home video boom had more than a little bit of a “wild west” quality about it. As VCRs became commonplace and video stores popped up across the nation with a zeal that may have outpaced the sudden burst in coffee shops of the ‘90s, there was a huge demand to fill the shelves and give eager renters a reason for forking over their four bucks to borrow a videotape for an evening. Ancient films were re-released with splashy new artwork. Low-budget, regional films suddenly found themselves in locations that the original producers could have never foreseen. Virtually anything that could be released was being released on VHS.

Still, this was not enough. Video distributors found even more ways to separate video stores from their money by re-editing old material that they had the rights to with trailers and a little new footage and selling it as a brand new release. Fan-made compilation films, splicing together the best parts of various movies and TV shows, had been around for years, but the home video boom made these compilations financially viable outside of the grey market circuit. Wizard Video was notable for this, releasing compilation films ZOMBIETHON, FILMGORE, FAMOUS T&A, and THE BEST OF SEX AND VIOLENCE, but they weren’t alone, as even major studios made big-budget equivalents in the form of TERROR IN THE AISLES and IT CAME FROM HOLLYWOOD, exposing the horror-hungry youth of the ‘80s to cinematic scares made decades before they were born.

In 1985, Vestron Video enlisted the services of director Domonic Paris to put together a trilogy of compilation films using footage that was easily clearable via the company’s legal team. The first, AMAZING MASTERS OF MARTIAL ARTS, was hosted by Ken Howard and featured clips from, well, martial arts films, along with some footage of Bolo Yeung throwing swords around. BAD GIRLS IN THE MOVIES strung together footage from the likes of DEADLY WEAPONS and SATAN’S SADISTS. Both are perfectly entertaining, but they pale in comparison to the final entry in the series, FILM HOUSE FEVER. 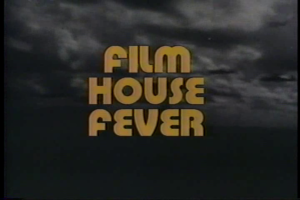 On the surface, FILM HOUSE FEVER is a basic compilation film, with the VHS cover art boldly mentioning that its cast includes Charles Grodin, Jamie Lee Curtis, Lon Chaney Jr. and Harvey Korman. As with much VHS ballyhoo, this is a lie – the film only uses clips featuring these actors (and no Curtis at all), thus deflating the dreams of the young video store regular anxious to see that Grodin and Chaney finally found a vehicle together. To make the cover even more misleading, of the group of people in the theater on the front cover, only one person represents anyone appearing in the film’s new footage, which features all of three speaking parts, half the number represented on the video box. Well played, Vestron! 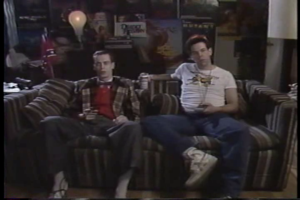 But it’s the one figure that DOES represent the tape’s actual contents that makes FILM HOUSE FEVER worth a look. In an effort to combine all of the random footage from other movies together, Paris shot wraparound scenes starring Steve Buscemi and Mark Boone Junior, then a popular performance duo in New York’s East Village. (The two had appeared together previously in 1985’s THE WAY IT IS and remain good friends today.) The pair play Vinnie and Tony, a couple of film-obsessed recluses, who spend their days in their apartment decorated in Vestron movie posters, watching multiple televisions at once, all showing clips of psychotronic (and no doubt Veston-owned) movies. 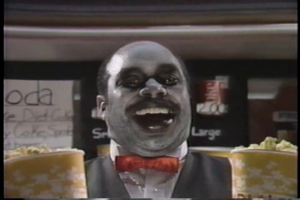 At the behest of their landlord and Tony’s inclination to cure Vinnie of “small box disease,” the duo decides to leave their above when they see a film festival advertising “all the movies you’ve been dying to see but were too embarrassed to pay five bucks for,” which seems a fair assessment of much of Vestron’s catalog. They then make their way in their 1956 pink DeSoto to the Palace movie theater in the Bronx for twelve hours (amateurs!) of indoor drive-in excitement. 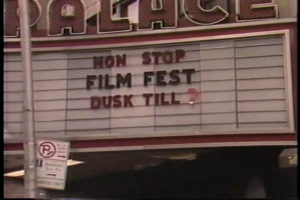 Confusingly, the film festival is ALSO called FILM HOUSE FEVER, so we get to see the title of the film twice before moving on to the good stuff. The compilation footage is divided into three sections; “The Ghouls and the Gore,” “Love and Lust” and “Carnage and Chaos,” though there is some overlap in the films used. SHE-DEVILS ON WHEELS shows up several times, as do Al Adamson’s DRACULA VS. FRANKENSTEIN and 2000 MANIACS, with appearances put in by ROCKTOBER BLOOD, THE WARRIOR AND THE SORCERESS, SEX AND THE COLLEGE GIRL (with Charles Grodin), SUBURBIA (!), STEEL ARENA and an endless array of H.G. Lewis films. The best surprise, however, are clips from a pair of short films directed by Josh Becker and starring Bruce Campbell– the killer lawnmower flick TORO TORO TORO and the INDIANA JONES parody CLEVELAND SMITH, BOUNTY HUNTER! While these shorts are commonly available on YouTube now, FILM HOUSE FEVER was probably the only way to see parts of these obscurities for decades without venturing into the netherbins of dealers at horror conventions.

Thorough the films, Vinnie and Tony make occasional comments, but their narration is always separate from the film clips themselves, so their banter never gets in the way of the clips on screen. They discuss who the star of DEBBIE DOES DALLAS is, boo at the acting of Montag from THE WIZARD OF GORE and attempt to determine whether or not the films they’re watching are terrible or brilliant or both, presaging at least a dozen conversations I’ve had in the past few years. 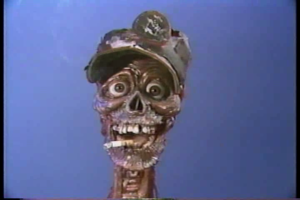 Of course, this being a “narrative film” instead of just a cheap excuse to put a bunch of explosions, murders, car crashes and boobs into a movie, there has to be an ending, and FILM HOUSE FEVER certainly delivers, as Vinnie and Tony suddenly discover that the rest of the audience is composed (or decomposed) of zombies. There’s never anything that builds up to this, so it’s more of a “here’s a way to end the movie” sort of thing, but it allows Buscemi and Boone is run around for a minute or two and then put on zombie make-up before the end credits roll. It’s impressively dumb, but it’s the entertainingly dumb ending that a ramshackle compilation like FILM HOUSE FEVER deserves. 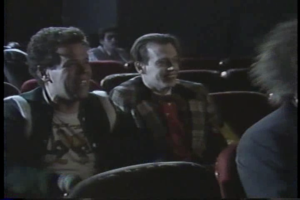 FILM HOUSE FEVER is little more than a curiosity today, but the enthusiastic performances by Buscemi and Boone make it a fun ride, even if the “greatest hits” nature of the clips being used is a heck of a lot more random than modern compilations like THAT’S SEXPLOITATION that gleefully celebrate all the films they reference. But it’s also a great representation of the “wild west” nature of home video’s boom years, in which you could pretty much get away with putting together anything and sticking it on a VHS tape and still sell thousands of copies. That’s the Vestron Video I knew and loved – you were never sure what the hell it was you were going to get, but you knew you were going to get something of entertainment value, however dubious that value may be. 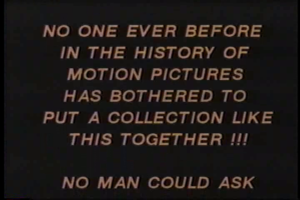