Last year’s “found footage” anthology V/H/S was a bit of a mixed bag — while few hated every segment, most viewers thought there was at least one short too many, and it’s hard to justify it’s two-hour running time. Fortunately, as it’s an anthology film, the expectations for the sequel, V/H/S/2 (formerly titled S/V/H/S and not to be confused with the shot-on-video anthology HI-8 featuring the likes of SOV auteurs Tim Ritter, Brad Sykes, Marcus Koch, Ron Bonk, Chris Seaver, Todd Sheets, Donald Farmer and Tony Masiello) are reliant solely upon those involved, and the directors behind the segments make V/H/S/2 look promising. (Maybe not as promising as, say, THE ABCS OF DEATH 2, but still.) Among those behind the camera are Simon Barrett (writer of the solid DEAD BIRDS), HOBO WITH A SHOTGUN’s Jason Eisener, THE RAID: REDEMPTION’s Gareth Evans, THE ABCS OF DEATH’s “L” director Timo Tjahjanto, returning director Adam Wingard, and the pioneers of the new found footage craze, Eduardo Sanchez and Gregg Hale, directors of THE BLAIR WITCH PROJECT.

The film is due out on demand June 6, and will be released to theaters July 12th. A red-band trailer (mostly for language) has been released today.

Tough to tell too much from the trailer, but it does seem to be taking a few different approaches beyond the “We’re filming something and then stumble into something spooky and then there’s a lot of running around and we die” approach of the first film, which can only be a good thing. The worst crime an anthology film can commit is making the stories too similar in tone and plot, so here’s hoping V/H/S/2 learns from the mistakes of the original. 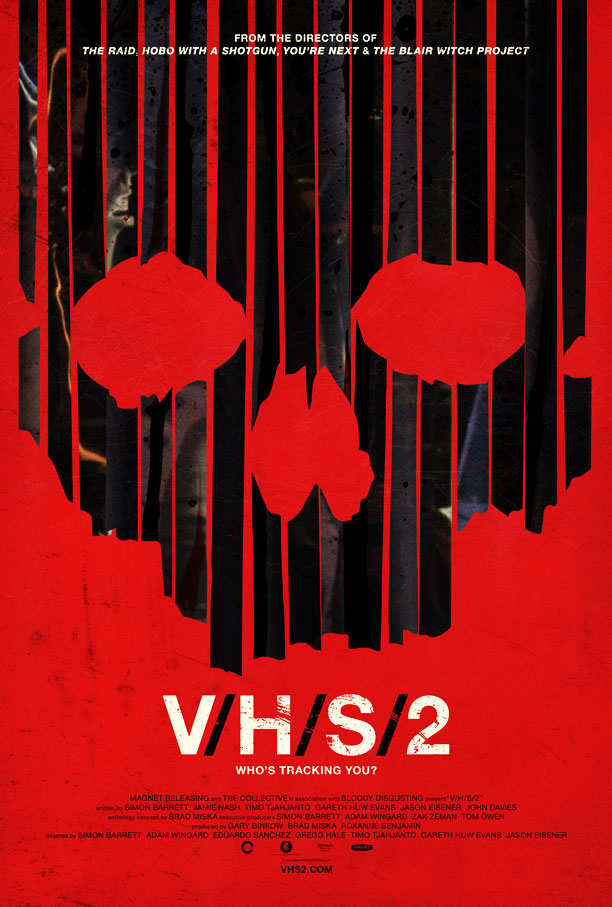