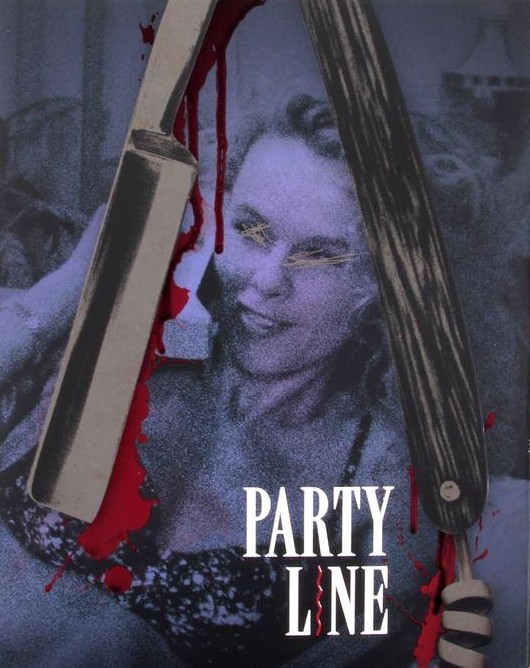 By 1988, the American slasher movie was on the decline, a fate perhaps best evidenced by the fact that its reigning titans would be on semi-regular hiatus within about five years. But like those icons, the slasher genre itself could never truly stay dead, and it found ways to persist through the occasional burst of inspiration in stuff like CHILD’S PLAY and I, MADMAN. More often than not, though, it proved to be more like a cockroach, enduring simply because it refused to die and leeched onto other burgeoning trends. One natural host was the emergent rash of erotic thrillers that seemingly formed out of the primordial ooze of late night cable programming. Boasting scantily-clad women and grisly carnage, it’s a natural, not-so-distant cousin to the slasher mayhem that preceded it, and a movie like PARTY LINE seems to promise the best of both worlds (read: plenty of titillation and gore).

Even better: it doesn’t just deliver on that promise; no, it generously reaches across genre aisles in a multi-partisan effort to entertain your ass off. Straightforward slashers may have been on the outs at this point, but buddy cop movies were still very much in, so you get that. Rubbernecking at messy, gossipy drama has timeless appeal, so you get that. And psychotic sibling duos preying upon unsuspecting victims just looking to have a good, erotically-charged evening were apparently appealing to someone, so you get a lot of that.

The details are even more astounding: the brother and sister are Seth and Angelina (Leif Garrett & Greta Blackburn), who trawl the titular party line for unfaithful lovers and lure them to a grisly fate.  Angelina brings married men to the bed, where Seth makes an unexpected appearance along with his signature straight razor that coaxes quick apologies from these marks.  Our two righteous judges decide these men are only sorry that they’ve been caught and deliver swift justice via slashed throats and hastily dumped bodies. Once this happens a few times, the baffled authorities — headed by exasperated police captain Barnes (Richard Roundtree) — are so desperate that they pair a hotshot DA’s assistant (Shawn Weatherly) with loose cannon homicide-turned-vice detective (Richard Hatch) to get to the bottom of it. 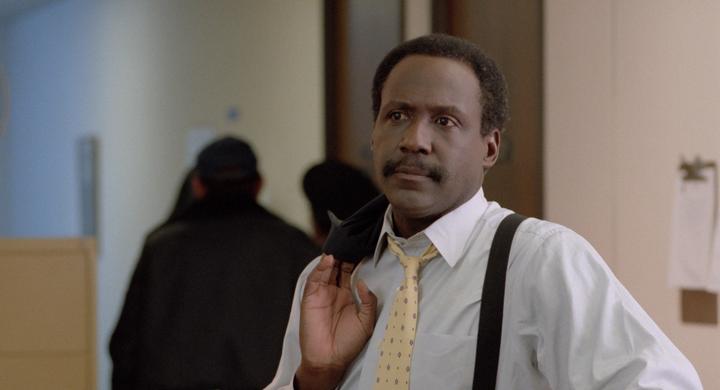 That’s already a lot of movie, but it’s really not even half of the delights PARTY LINE eventually offers. While you could easily imagine a perfectly entertaining erotic-slasher-police procedural spinning out of this, writers Richard Brandes and Tom Byrnes clearly weren’t content to stand pat. Sensing the potential for complete and utter sleaze, they went ahead and mined this scenario for just about all of its scummy, lurid potential. An entire subplot revolves around a lecherous suburban dad sexually harassing (and eventually stalking) his (very obviously) under-age babysitter (Patricia Patts), an adventurous high school girl whose curiosity leads her to inappropriate conversations on the party line. And this being PARTY LINE, her innocent dalliances land her squarely into the middle of actual danger, thanks in large part to some of the most incompetent, irresponsible police work ever committed to film. I know it’s a cop-out to just insist you’ve got to see this shit, but trust me: you’ve got to see this shit.

The film isn’t without its lulls, to be sure; there are certainly some stretches where its schtick starts to feel a little bit too repetitive — how many times can Hatch and Weatherly smooth over their disdain for begrudging respect? Rest assured, you’ll find out before PARTY LINE sprints to its conclusion. However, there’s plenty of outrageous nonsense to keep it afloat even during these lulls.

Most of it involves the bizarre relationship between Seth and Angelina, who are a little too close, if you know what I mean — and I think you do. Does it even count as “innuendo” when one of their earliest exchanges has Seth salaciously reminding his sister that she was “father’s favorite work?” Those thinly-veiled references eventually boil over into full-on incestuous overtures that find Seth donning his mother’s clothes as Angelina assumes the role of the dead, domineering mother that loved her son.  PARTY LINE obviously exploits the incongruity of former child star and teen heartthrob Leif Garrett in such an unhinged role, and he makes the most of the opportunity by turning in this detached, weirdo performance that somehow feels too invested and spaced out all at once as he rages and simpers at the memory of dear, departed, abusive mom.

Blackburn’s turn is even more fascinating in the sense that Angelina somehow feels like the only human being in the whole movie — this despite the fact that she starts off sort of like a femme fatale Fletch, adopting various wardrobes to lure in unsuspecting men before her brother slashes their throats.  But during the course of PARTY LINE, she emerges as a victim herself, as her twisted family essentially warped her into what she’s become. While she’s obviously having a lot of fun as a seductress, Blackburn also manages to capture Angelina’s frail, wounded soul, briefly giving viewers the impression that all of this nonsense might be more dramatic than expected.

I can’t in good conscience say that it is; I can say, however, that director William Webb does his best to keep pace with this enthusiastic cast and a script that’s hellbent on careening right off of the rails. He even occasionally finds some cool visuals, like a shot of Garrett menacingly prowling through a neon-splashed nightclub.  Please note that this is quite possibly the only movie that boasts a shot of Leif Garrett menacingly prowling through anything.

Likewise, it has an assortment of other idiosyncrasies that  linger longer than the actual plot, including but not limited to: Richard Roundtree perpetually glowering in disapproval at Hatch, whose reckless police brutality involves an instance of something Joe Bob Briggs might refer to as “urinal-fu;” Weatherly enduring a ton of casual sexual harassment from her boss; Hatch wearing a leather jacket and sulking in front of a fireplace when his fellow cop calls delivers some horrific news with all the sympathy of a fast food employee apologizing for screwing up your order; Webb abruptly cutting from this pivotal, emotional moment to a bunch of kids cutting up on the party line; a kid with a horrendous mullet stumbling upon a murder victim — and the list goes on, much of it swaying along to a sensuous saxophone soaked score to emphasize the 1988 of it all. 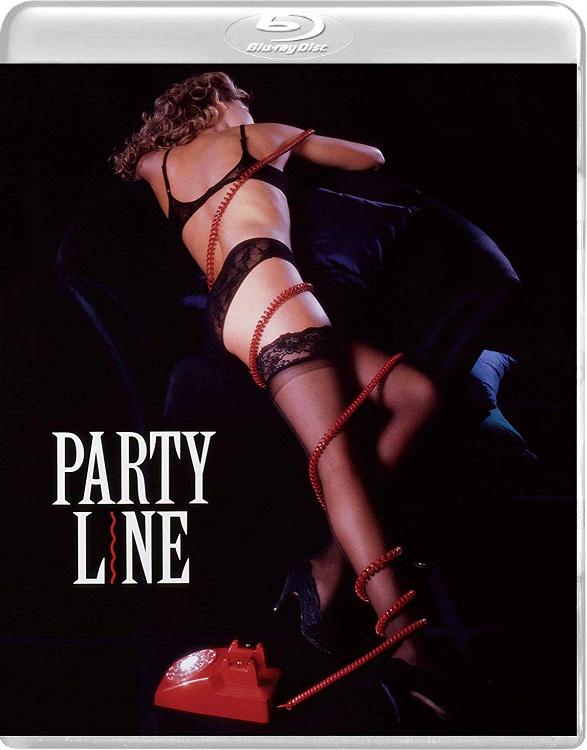 Somehow, PARTY LINE has pretty much slipped under the radar for the past thirty years. It did make it to DVD on an unremarkable release whose hideously generic cover art did it no favors, but that’s even more irrelevant now that Vinegar Syndrome has unleashed a Blu-ray/DVD combo pack boasting a sterling 4K restoration and a DTS-MA mono track. Even if PARTY LINE does feel like the sort of film whose natural habitat was fuzzy, early-’90s cable TV (complete with ads for actual party lines and other scandalous 1-900 numbers), it obviously benefits from the presentation upgrade here.  The film looks marvelous and meets Vinegar Syndrome’s lofty standards.

An interview with Richard Brandes is the centerpiece supplement and features the screenwriter giving a brief overview of his early career that put him on the path to PARTY LINE. Most of the sixteen-minute interview is obviously dedicated to recounting the film’s production, starting with its obvious hook exploiting the era’s party line craze. Along the way, he discusses various aspects of producing the film, from the business side to creative choices. He even provides some on-set anecdotes since Webb invited him to be part of the actual production and even allowed him a bit role as a club patron that’s roughed by Hatch. It’s a brief but engaging interview from a Hollywood mainstay who continues to write and produce projects.

As is typically the case with VS releases, PARTY LINE also sports a theatrical trailer and reversible cover art, plus an exclusive limited-edition slipcover if you order directly from their website. For the past five years, Vinegar Syndrome has proven its mettle by dusting off this particular sort of gem: an obscure oddity that got lost in the shuffle as the sun set on the VHS era and is only now getting its due. PARTY LINE continues the trend in a big way, especially for those of us looking to dial up gonzo slashers that prove this genre will endure by any means necessary — even if it has to resort to giving Leif Garrett the mother of all Oedipus complexes.