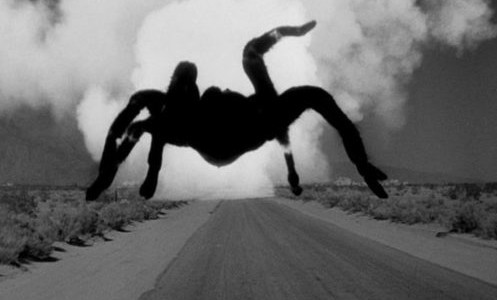 Scream Factory goes for the creepy crawly in their Blu-ray release of the 1955 Universal-International big bug movie TARANTULA.

We get off to an atmospheric start with an unidentified man in the desert dropping dead. He’s not exactly a brown eyed handsome man either. Small town doctor Matt Hastings (John Agar in the first of his three science fiction movies for Universal) gets called in, and the corpse is eventually identified as Dr. Eric Jacobs–assistant to local science guru Gerald Deemer (Leo G. Carroll in the role that got him immortalized in lyrics for THE ROCKY HORROR PICTURE SHOW). Whatever killed Jacobs also disfigured him, and no one seems to realize he died looking like the MONSTER ON THE CAMPUS and Mr. Hyde from his run-in with Abbott and Costello–but maybe no one in Desert Rock, Arizona had seen those movies or knew how much mileage cost-conscious Universal would get from one of Bud Westmore’s lazy monster masks.

Dr. Matt is intrigued by the mystery and starts hanging around Deemer’s house on the outskirts of town–or is it that he’s attracted to Deemer’s attractive new assistant Stephanie-but-everyone-calls-her-Steve (Mara Corday at her most va-va-va-voom)? It’s both, actually, and who can blame the guy? 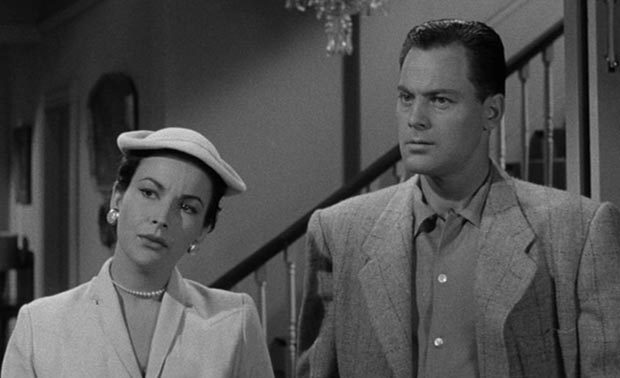 Back at the main plot, Deemer’s area of research is growth hormones, and how they might be used to scientifically increase food supplies to ease world hunger. But there have been weird side effects, and another of Deemer’s assistants goes nuts and attacks the doctor–dosing the older man with the hormone and inadvertently releasing a tarantula from the lab that is the size of a coffee table–and growing.

While Matt and Steve continue to probe the mystery, that big spider is getting bigger, and it starts to eat the populace around the town. Eventually our heroes get a look at what’s bugging Desert Rock, and by then the tarantula may be too big to stop. If only we had someone like Clint Eastwood available with some of that newfangled napalm…

After the Gothic horrors of FRANKENSTEIN, DRACULA, THE WOLF MAN, and all their various pairings and tussles carried Universal through the ‘30s and ‘40s, they turned to more scientific monsters in the ‘50s, which was a much better idea than yet another stalk around the castle for the previously named trio and their buddies. These new menaces from Universal-International included THE CREATURE FROM THE BLACK LAGOON, THE MONOLITH MONSTERS, and THE MOLE PEOPLE. And then there were the big bug movies. Other studios gave us THEM! (Gi-ants), EARTH VS. THE SPIDER, and THE BLACK SCORPION, while Universal-International offered this movie and THE DEADLY MANTIS. 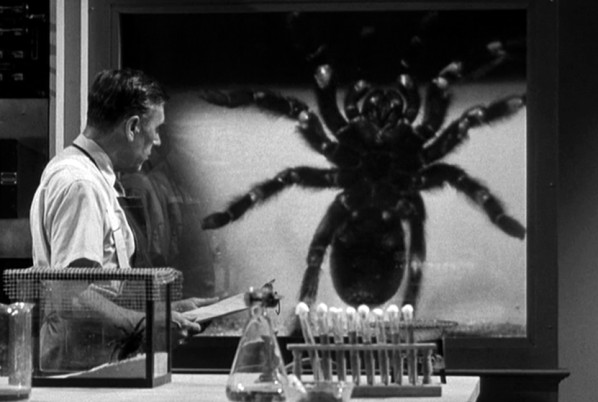 The dangers of radiation and what it might do to the average insect or arachnid resulted in one of my favorite sub-genres of scary cinema. Considering the state of the state of the art in special effects in the 1950s, there were a wide variety of effects used to bring these critters to oversized life. Sometimes they were matted into an existing shot to appear huge; sometimes two different scaled shots were combined into one; and sometimes animatronic mock ups were used. They all had varying degrees of success, and I like the old school inventiveness of all of them. For TARANTULA, Clifford Stine and David Horsley use matte effects to put a real tarantula into shots showing him oversized for the most part; there are a few close-up shots of a puppet spider face (!) created by the legendary Wah Chang, but we only see that a couple of times in the picture. And the effects do what they set out to do: they show a big ass spider roaming a desert countryside, knocking boulders down a cliff, and even destroying a multilevel house. There are some issues here and there–sometimes the spider or some part of it is translucent, sometimes the feet disappear when they “touch the ground” and a couple of times bits of legs disappear behind something that is matted out of a given shot. But that’s quibbling. It’s a scary damn giant tarantula and it will eat you.

The screenplay by Robert M. Fresco is serviceable, and as I found out from the disc’s commentary, the whole thing was based on a story by Jack Arnold that he had based on an episode of Science Fiction Theatre called “No Food For Thought.” That episode aired in 1955, so they obviously wasted no time adapting it. The TV show had no big bugs, but was about a scientific enclave in the desert who find the downside to creating synthetic foods through growth hormones. Jack Arnold directed that episode and thought it would work as the basis of the story to get a humongous spider up and running for a feature film he’d be directing. 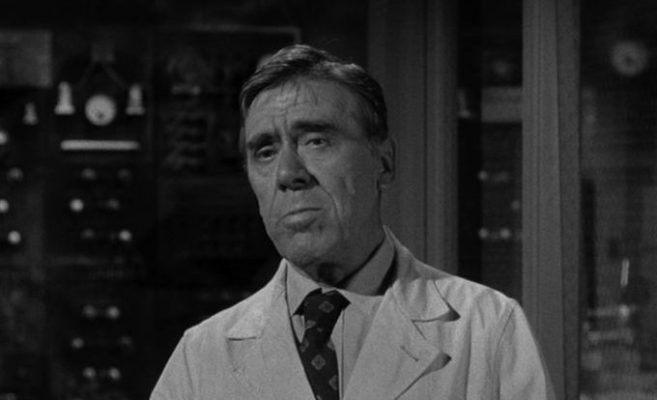 Arnold was the perfect guy to direct TARANTULA. He’d started directing shorts in the ‘40s before moving into feature films for Universal in the ‘50s. On his resume are a couple of bona fide classics–the aforementioned CREATURE FROM THE BLACK LAGOON and THE INCREDIBLE SHRINKING MAN (which reportedly features a cameo from the same spider star of this movie). Arnold handles this kind of science fiction just right, getting good performances from the cast of familiar faces and letting the effects take center stage in just the right amounts. In addition to the actors already named, the sharp eyed viewer will spot Nestor Paiva, Hank Patterson (Mr. Ziffel from Green Acres); and Raymond Bailey (Mr. Drysdale from The Beverly Hillbillies, appearing here without the toupee I’ll bet you didn’t know he wore on that show.) And best of all, it is an early appearance from Clint Eastwood, but you’ll have to make do with just his eyes and voice as the getup he’s in only allows for that much of him onscreen. 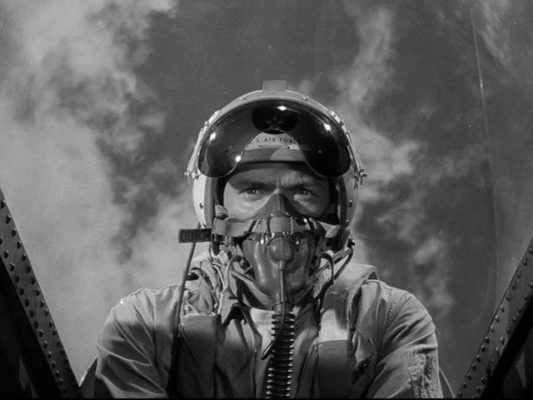 For the Blu-ray release, Scream Factory has used a new 2K scan of the original film elements, and the movie looks very nice. There is a pleasing amount of film grain in the picture and the contrast for the various night scenes throughout is crisp. The sound is clear and well mixed. There is a new audio commentary as well. It is hosted by film historian Tom Weaver, but he brings along a crew to assist, including Dr. Robert J. Kiss and David Schecter–and in something new to my ears, actors to intone quotes from the actors and crew people who are no longer around to be on the commentary themselves! The commentary covers everything you could think of across the 80 minutes of the movie, with in depth sections on the movie’s music–mostly taken from previously written cues from a number of composers including Henry Mancini–and the movie’s releases in various double feature pairings and by itself around the world. 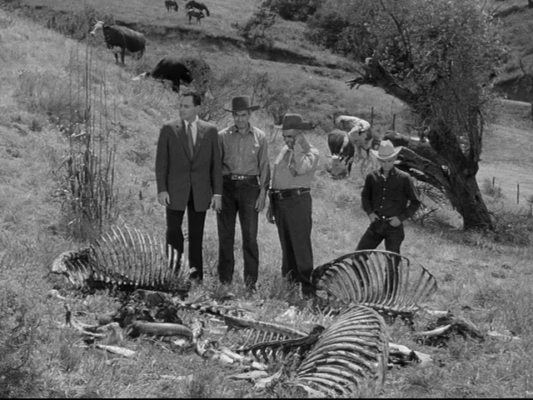 Basically, if you enjoy this kind of movie, this is a solid purchase. Unlike the earlier Universal DVD release, which was in a box set with several other science fiction pictures, you are only getting the one movie. But the beautiful presentation and the commentary make this worthwhile, even as a double dip.

And lookie there–I managed to get through this whole review without once reverting to the line “this picture’s got legs!”

TARANTULA is available today on Blu-Ray from Scream Factory. 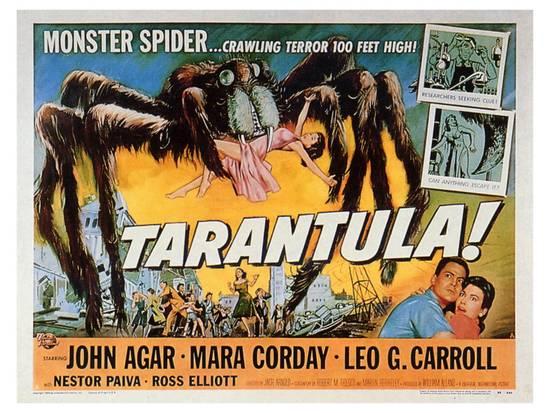