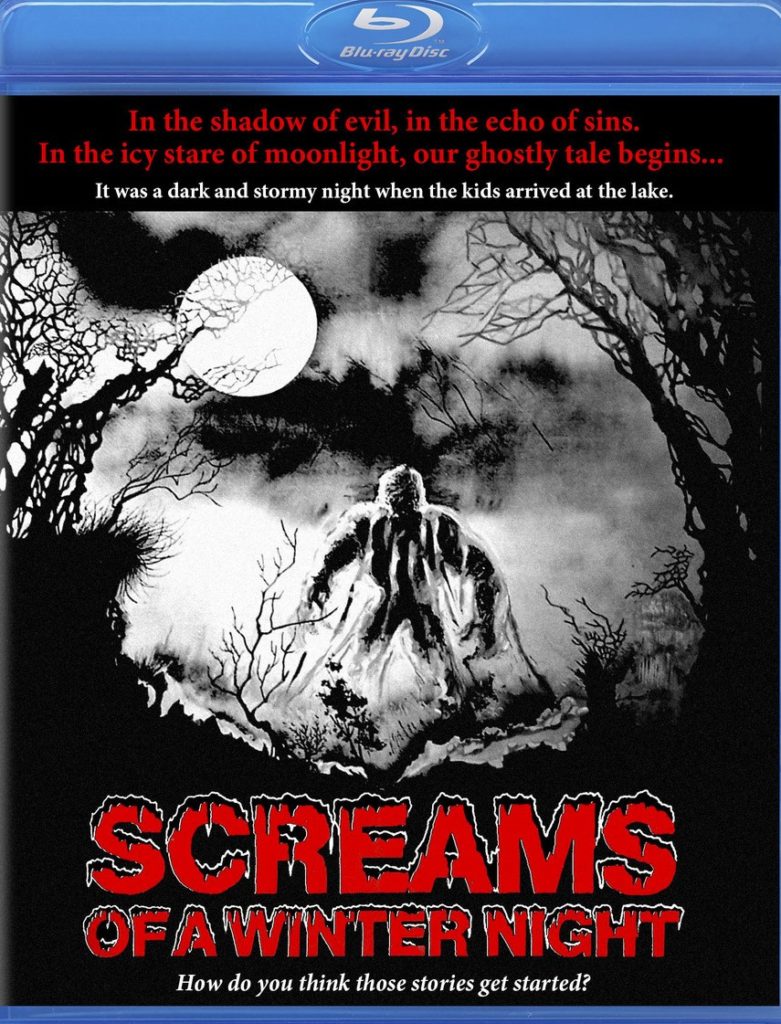 Anthologies rarely come as elemental as SCREAMS OF A WINTER NIGHT. Just the title alone evokes a primal scene, complete with howling wind and icy desolation. It’s the perfect name for a story about a group of friends embarking on a retreat to the woods to goof off and deliver campfire tales between rounds of booze. Indeed, everything about James L. Wilson’s no-budget portmanteau conjures up the stuff of scary stories: the local, grisly lore that haunts a small town; the urban legend about doomed youth; the one about a centuries-old death curse upon profaned land. SCREAMS is practically overflowing with such irresistibly sordid fare. Even its opening credits can’t unfold without one, as audiences hear the cries of damned souls encountering some unholy creature amidst the whipping wind.

On the other side of the credits, another familiar scene unfolds. Our ill-fated group makes its approach to their backwoods cabin, only to stumble on a hole-in-the-wall gas station lorded over by a bunch of ominous hicks. They’re headed to Lake Durand, they gleefully inform the attendants; “huh—folks don’t go up there much anymore,” the youngest of the brood (William Ragsdale) spits back with a wry smile.  Undeterred, the bunch rolls along down a dusty, desolate dirt path, surrounded by nothing but pines and bad vibes. We’ve seen — and heard — this story before.

Ditto for when some of the group (their names are unimportant, as you’ll quickly discover) wanders the grounds and swaps tales they’ve heard about the place. Native Americans once called the area Lake Coyote, but now it’s named after a family that perished here decades ago at the hands of a demonic wind spirit that supposedly still haunts the forest. An abandoned farmhouse and its adjacent cemetery stand as remnants of a tale that might be more fact than fiction. After all, you can’t help but notice the wind already gently rustling the leaves.

Once inside, the friends mill about the cabin, cutting up and screwing around until one of them has the bright idea to tell more stories. Before the night is through, a quartet of tales unravels, each a little bit hokier than the one that came before it.  They, too, form a familiar menagerie of fright. An inhuman Bigfoot creature terrorizes a couple on an old country road. Sorority members spend the night in an abandoned, supposedly haunted hotel for their initiation. Knuckleheads summon a witch at a cemetery. A woman fends off a rapist with lethal force and continues to harbor the trauma years later, much to the misfortune of her roommate. In between the stories, drunken revelry and pranks ensue as the partygoers remain oblivious to the wind working itself up to a full-throated roar outside.

Spawned from the same Southern-fried drive-in circuit that gave us the likes of S.F. Brownrigg and Charles B. Pierce, SCREAMS OF A WINTER NIGHT’s regional nonsense won’t be for everyone. A charitable critic would call the acting “functional,” especially since many of the cast members pull double duty by playing multiple characters. The photography is sometimes ragged, full of creaky, slow tracking shots, resulting in scenes that tend to drone on.  At two hours, it’s certainly stuffed full of gratuitous padding, with the first proper story unfolding nearly 40 minutes in. It’s no surprise that producers cut the graveyard ghoul segment entirely from the theatrical cut to get the runtime down to a brisk 90 minutes. If I were to run a video rental store, something like SCREAMS would rest in an “acquired tastes” shelf, a space reserved for unpolished gems that ask you to meet them halfway. After all, it’s the sort of movie that boasts an ethereal green light and howling wind as its signatures.

But if you’re acquainted with such fare, you might find SCREAMS to be more refined than most. It’s practically catnip for the crowd looking for a treasure trove of low-budget, homespun charms, as Wilson rummages through five-and-dime masks, kitchen sink gore, and cheap Halloween decorations in realizing this thrift store aesthetic. One character accuses another of being “crazy as a damn jaybird” in an absolutely perfect, overdone southern drawl that captures the earnest, community theater troupe effort on display. SCREAMS OF A WINTER NIGHT is giving you everything it has, even if it’s only operating with the resources usually reserved for the homemade, roadside haunts that pop up each October.

Some genuine bursts of inspiration do creep through. Impressive helicopter shots establish the eerie desolation of these Louisiana backwoods, producing the same effect as the rustic, spooky landscapes in THE LEGEND OF BOGGY CREEK. The day-for-night photography in the Bigfoot segment creates an otherworldly ambience; ditto for the decision to shoot the cemetery sequence in broad daylight, thus letting the audience in on the fact that the “witch” is just a static ghoul cobbled together from and arts and crafts set. SCREAMS OF A WINTER NIGHT is a reminder that atmosphere doesn’t cost much, and Wilson captures that elusive je-ne-sais-quoi of  quasi-amateur filmmaking, resulting in a film that works despite — and because of — its ramshackle, gritty, barely held together by spirit gum and duct tape production values. Again, this is a film that somehow makes a green light and howling wind legitimately evocative. You don’t do that without some measure of low-budget sorcery.

Likewise, SCREAMS OF A WINTER NIGHT sneakily sports one of the greatest frame stories of any anthology. In keeping with the rest of the film, there’s not much to it, but that simplicity is appealing. After all, there’s a reason horror continuously returns to the cabin-in-the-woods premise, and this particular riff is doubly effective by imagining it as the perfect theater for scary stories. While the drama between the actual characters is hardly compelling, the slow burn menace of encroaching demon wind adds another layer of lo-fi atmospherics. Slowly but surely, the wind works itself up to an wraithlike force that threatens to drown out the carefree shenanigans altogether.

Ultimately, this unassuming grace note swells into an EVIL DEAD-style freakout, complete with frenzied camerawork and an exploding cabin—only Wilson and his ragtag crew pulled this off a couple of years before Sam Raimi and company. By the time the characters realize their fate, here it’s too late: “How do you think these stories gets started?” one of them asks, grasping with horror that she, too has now become the victim of a tale that will eventually be recounted on another dark and stormy night.

SCREAMS OF A WINTER NIGHT is definitely a “warts and all” production. With its sluggish pacing and somewhat uneven tone (the sexual assault victim becoming a psychotic murderess feels a bit too real world and grim compared to the rest), it’s not always easy to love. But when it embraces its primal appeal and speaks directly to that part of our souls that simply craves spooky tales whispered around campfires, SCREAMS proves to be a scrappy effort that constantly reeks of wannabe (but competent!) filmmakers making a movie for the hell of it. Between its threadbare resources and familiar folklore, it should be one of the most generic anthologies imaginable; instead, it has enough idiosyncratic charm to separate itself from the primordial, regional exploitation ooze. 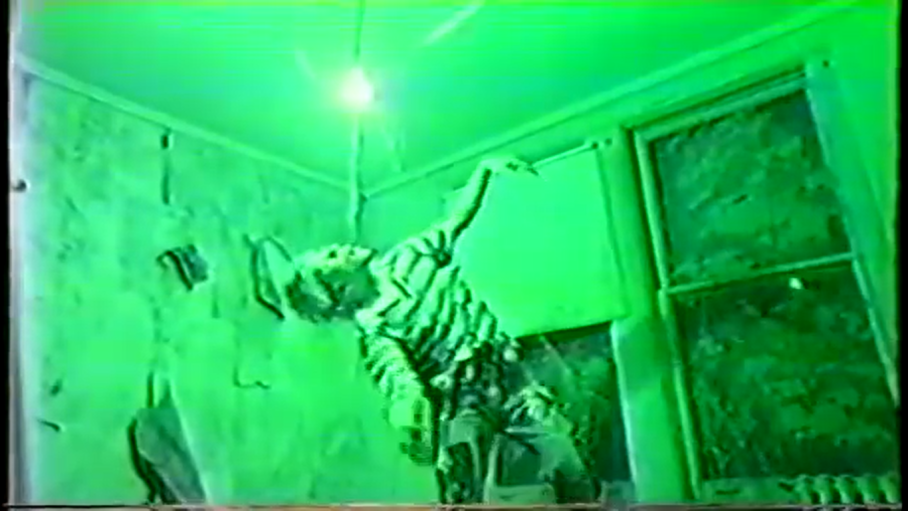 As is the case with many Code Red titles, SCREAMS OF A WINTER NIGHT’s journey to the digital realm has been something of an ordeal. Originally announced several years ago, it’s only recently debuted on Blu-ray (after skipping DVD altogether), and, to this eccentric company’s credit, it’s been worth the long wait. Boasting a new 2K scan o the original 16mm negative, it’s leagues ahead of the VHS-era transfer that’s circulated online and on bootleg discs for over a decade now. More importantly, this release features the original, uncut 124-minute cut with the fabled fourth segment included.

For good measure, Code Red has also thrown in the original theatrical cut, and, though it’s only in standard definition, this version of the film hasn’t looked this sharp since it toured the drive-in circuit in ’79. Besides a trailer, the lone supplement is a 20-minute interview with actor Gil Gaslow, who reminisces about the circumstances surrounding the film’s production and his relationships with his co-stars. He has some fun making-of anecdotes about recording the opening credits bit and lending his voice to the film’s original (but ultimately unused) trailer, and seems thoroughly amused that anyone is even asking him about SCREAMS OF A WINTER NIGHT 40 years after its release.

Right now, the only hang-up with this Blu-ray is its spotty availability, something that’s become all too familiar for Code Red fans who find themselves constantly checking various outlets that may or may not even be online at any given moment. SCREAMS is currently an exclusive at the Dark Force Entertainment superstore, at least when it’s open. Quantities are also limited, as the first couple of batches sold out within minutes, though it should be noted that most Code Red titles do tend to hang around in print for a while.

Further complicating the situation are Code Red founder Bill Olsen’s health issues, which were recently exacerbated by a fall in his home, an unfortunate turn that puts all of this nonsense into perspective, and we certainly wish him a speedy recovery. In more encouraging news, as I’m writing this article, Mr. Olsen is broadcasting live from his hospital room via Facebook in full Banana Man regalia (I’m just gonna kindly ask you, constant reader, to google the details to fully understand this sentence) as the Dark Force store prepares to reopen with more copies of SCREAMS in stock. Say what you want about Code Red, but there’s rarely a dull moment with this company, plus their releases tend to deliver.  This one is no different.

Like a good huckster, Olsen is touting SCREAMS OF A WINTER NIGHT as the company’s biggest release ever; I’m not sure that’s completely true, but I’m happy to see it finally surface nonetheless. After years of existing as something of a fable itself, it’s appropriate that this title has added to its own legend by remaining somewhat elusive. But as romantic as that notion sounds, I hope that the obvious demand for SCREAMS convinces Olsen that there’s a bigger audience for these cult objects than he seems to think. We’ll probably never return to those halcyon days when Code Red titles lingered on shelves at Best Buy, but here’s hoping we can find a happy medium between that and the current system, which requires stalking a Facebook page more than any reasonable human being should be expected to.