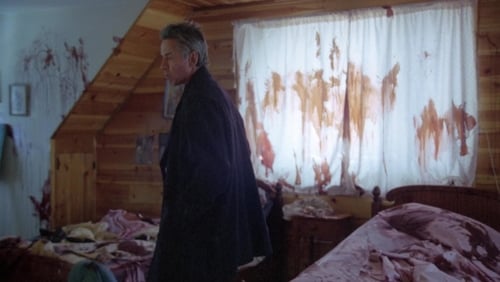 Video Violence is a weekly column dedicated to genre films recently released to home video. This week’s column takes a look at early-’90s cable staple SLAUGHTER OF THE INNOCENTS. 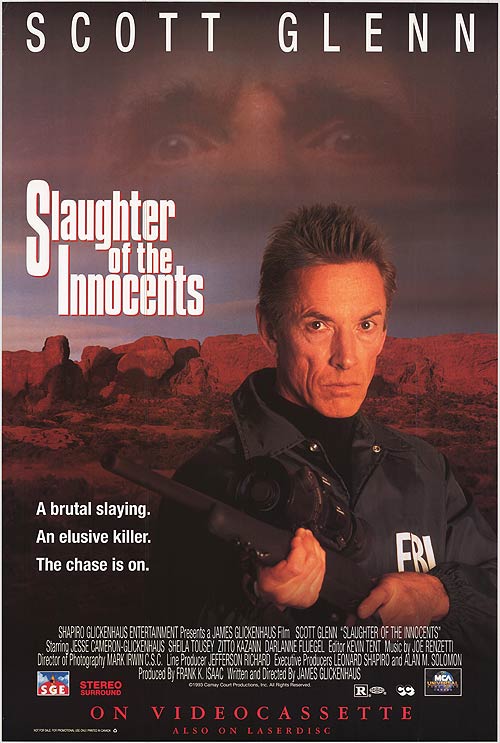 To understand where SLAUGHTER OF THE INNOCENTS is coming from, you have to understand two things about the early ’90s. First of all: SILENCE OF THE LAMBS was huge. Like, “Sweep the Big Five Academy Awards and become a cultural phenomenon” huge. Secondly: this was the period in time when most people still assumed that a whiz kid with a computer could literally do anything. This second point — plus the fact that HOME ALONE was very much a thing — is especially important in understanding how James Glickenhaus might want to do a riff on SILENCE OF THE LAMBS by way of a Nickelodeon show starring a hot-shot detective or something.

Let me explain further, starting with something that might make a little more sense: Scott Glenn is Stephen Broderick, an FBI agent that specializes in the grisly business of serial killers. It’s perfectly natural when he takes a special interest in a horrific case involving murdered children in Utah. Less natural: he listens to — or, hell, seemingly relies on — information from Jesse (Jesse Cameron-Glickenhaus, the director’s kid), his brilliant ten-year-old son with a home computer that functions as an investigative Swiss army knife. Little dude can hack databases, run elaborate searches, take phone calls, and even have his machine speak — all from the comfort of his own room. I’m not even sure why the FBI even needs to exist, since SLAUGHTER OF THE INNOCENTS operates in pure fantasy land.

Anyway, the film often whiplashes back to earth to remind us that it’s about a spree killer who primarily slaughters children. Stephen and Jesse have a special interest in this case because the computer spits out compelling evidence that Utah has condemned and executed the wrong man, leaving the actual murderer free to continue his grisly handiwork. We know it’s a shaggy-haired, wild-eyed Manson wannabe roaming the Utah countryside. Stephen and his team, on the other hand, grasp at straws, chasing any and every lead imaginable, which leads to encounters with a bizarre religious sect and political extremists. Meanwhile, Jesse toils away on his computer, uncovering clues of his own.

Ostensibly pitched as a serial killer thriller and the tender story of a father and son bonding during the course of a murder investigation, SLAUGHTER OF THE INNOCENTS is something else. Glickenhaus at least has the decency to adequately prepare you for the wild whiplash you’ll experience throughout the film, as its first three scenes pinball from a mother discovering her slaughtered children, Jesse tinkering on his supercomputer, and Stephen showing up at the park just in time to see his kid win his baseball game. If you saw any of these three scenes completely out of context, you would absolutely be convinced they belonged to different movies.

So it goes with SLAUGHTER OF THE INNOCENTS, at once a disturbing journey into a madman’s gruesome murder spree and the tale of a precocious kid and his computer. One minute, you’re watching an agent run down the filthy evidence from a semen-stained crime scene, the next minute you’re watching Jesse badger his mom to let him go on a cross-country flight to join dad in his quest to capture the killer. What’s more, everyone involved is 100%, deadly serious about it all, no matter how ludicrous it might seem to an audience that can’t help but gawk and guffaw at the wild tonal shifts and the even wilder plot developments. At times, Glenn flashes a wry smile that leads you to believe he might be in on the joke; however, his performance is otherwise so sincere that it’s easier to believe that his grin just means that he’s having a blast with all of this nonsense.

And, honestly, who can blame him? At a certain point, it becomes difficult to deny the weird charm of this weirdly good-natured but completely unhinged experience. You feel compelled to smile and nod at its insistence that this is actually a heartwarming family story, only to realize that even this is preposterous when the old man is on a wild goose chase, leaving his son to conduct his own investigation. Jesse is a true scamp, capable not only of sneaking away from home but also flying completely across the country, where he solves the case himself. He has his computer, you see, not to mention a dirtbike, which is basically a Precocious ’90s Kid Starter Kit.  My man is basically unstoppable.

Anyway, it comes as no surprise that Glickenhaus — who directed scumbag classic THE EXTERMINATOR — is at his best when dwelling on the savagery of this lurid tale: the ghastly crime scenes, squalid lairs, and its absurdly violent outbursts. An entire plot digression exists only for a punchline where Stephen’s SWAT team blows away a neo-Nazi, which is certainly allowable if not downright appreciated, perhaps even more so now than it was in 1993.

SLAUGHTER OF THE INNOCENTS has a terrific, grungy texture to it. No matter how silly the stuff with Jesse and his computer is, Glickenhaus remains committed to the gritty, gross, and grisly details of this psycho thriller. His pièce de résistance is a third act set in the killer’s filthy, horrifying lair, where Jesse finds himself frantically trapped amongst mangled bodies, bizarre relics, and a desperate hostage. Shit gets real, to put it mildly.

Glickenhaus follows this deranged tale all the way to its wild, outlandish conclusion. After taking in the outstanding, unsettling production design here, he sets out to crafting the most outrageous conclusion imaginable involving a harrowing chase, a replica Noah’s ark, and lots of fire. Going out in a literal blaze of glory has rarely felt so satisfying as it does here, especially when Glenn caps it all off with a syrupy-sweet lecture with his boy. At this point, SLAUGHTER OF THE INNOCENTS just needs some hackneyed, dramatic TGIF music to be the most fucked-up Very Special Episode of a ’90s sitcom imaginable. I feel pretty confident in assuming that’s not something you hear too often about most SILENCE OF THE LAMBS knock-offs. 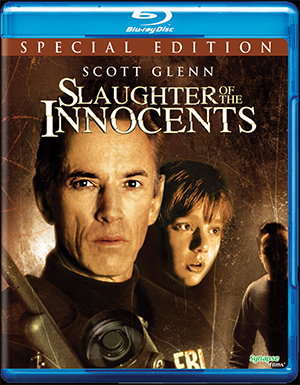 Long out-of-print on DVD, SLAUGHTER OF THE INNOCENTS recently debuted on Region A Blu-ray courtesy of Synapse Films, which has done its due diligence in upgrading that old, bare bones release with a meticulously restored presentation and a nice assortment of vintage and newly-produced supplements. The new material includes a pair of interviews with effects artist Gabe Bartalos and DP Mark Irwin, both of whom recount how they came aboard the project before detailing their contributions to the film. Bartalos focuses particularly on the challenge of creating such grim, grotesque effects (especially when it involves kids) and treats viewers to some behind-the-scenes footage and photos. Likewise, Irwin discusses the demands of finding the correct look for the film, plus the elaborate setups for some of the stranger set-pieces.

Glickenhaus himself features on a commentary track and shows up in some of the older material, including a brief on-camera interview, some standard EPK promo material, and an appearance at a festival screening where he introduces the film alongside his son. Both Glenn and the younger Glickenhaus also appear in brief vintage interviews, where both of them tow the company line of insisting SLAUGHTER OF THE INNOCENTS is a heartwarming father-son tale. Thirteen minutes of deleted and alternate scenes, screen test footage, and several trailers round out an altogether impressive release of a film that fell between the cracks once its theatrical release fell through, sending it straight to cable, where it enjoyed a steady rotation on HBO.

25 years later, it remains pretty obscure, but maybe this disc will do something about that. At the very least, it seems like SLAUGHTER OF THE INNOCENTS should be a little bit more infamous, if only because it’s so outlandish, and not in the usual, self-aware, try-hard manner. Instead, it’s almost sociopathic in its expectation that you just go along with it without blinking at how unhinged and ludicrous it is. Good luck with that, though: this thing is a hoot whether it knows it or not.