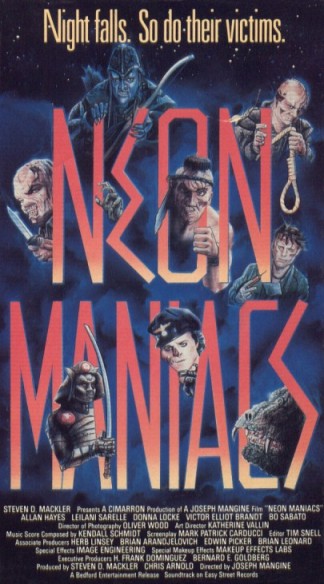 This is the way I imagine ‘Neon Maniacs’ was pitched to whatever person allowed ‘Neon Maniacs’ to be made. In slasher film reality, one dead, bullied kid can kill an entire summer camp of physically fit teenagers, so I’m not sure why ‘Neon Maniacs’ felt the need to have 10-15 (maybe up to 20… I don’t know, I lost count…) working-class zombie-like things stalking its teenage protagonists. 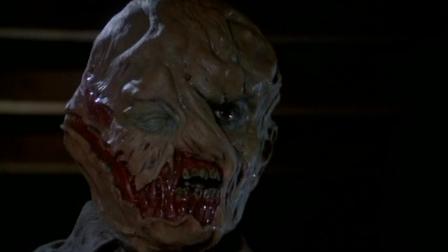 Here’s the plot: Nancy is a pretty girl, Steven has a crush on her but he can’t ask her out because he’s really socially awkward (except when he’s on stage!). His dog (named Dog) jumps on Nancy one night and all her friends laugh at him (“Ha! Dog!”) and then her friends go off and get murdered by The Neon Maniacs (which I’m assuming is what we’re supposed to call the aforementioned gaggle of killers) but Nancy survives by locking the car door, screaming, and closing her eyes. Then the cops show up and Nancy’s all “monsters killed my friends!” and the cops are like “we don’t see anything” so then I guess Nancy’s like “okay, bye” and she goes home, where she has a nightmare in a pool (because of witnessing her friends getting killed by monsters and stuff).

The next day Nancy goes to school where everybody is all “where are you friends” and she’s all “dead by monsters.” Nobody believes Nancy’s story, and they’re all kind of fine with that. They don’t think she just killed her friends, they just think her friends are all missing and she has this story about monsters. Ha! Crazy Nancy! Anyway Steven uses Nancy’s newfound fragile mental state (and his totally lame job delivering groceries for his Dad!) to get close to her. Also, a little girl named Paula who spends her time horror monster movies with a VHS camcorder hears that a local teenager saw some actual monsters and starts harassing Nancy for details. 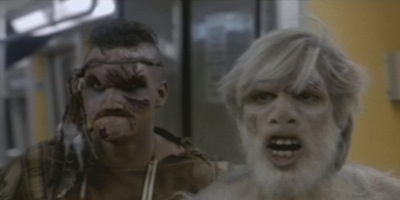 Seriously, no character in this film has any genuine regard for Nancy’s mental well-being. Including Nancy.

Anyway, eventually the monsters start hunting Nancy (and Steven) and nosey Paula sees the monsters so they start stalking her too. And there are so many fucking monsters! There’s a doctor monster, a caveman monster, a samurai monster, an “Indian” monster, a biker monster, a hangman monster, a cyclops puppet monster with a meat hook, and like 74 others who just slowly lumber after our protagonists and are not at all neon. Also, they live under the Golden Gate Bridge- which isn’t actually important, but it’s weird, right? 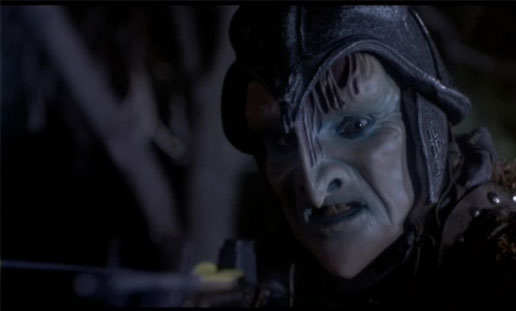 Needless to say everything is odd-as-fuck enough to be pretty entertaining and it all culminates at a Battle of the Band, which should be the highlight of any weird 80s movie about high school students, unfortunately that’s where the film slows to a crawl. And then it keeps going. We move past the Battle of the Bands onto another scene and I thought “why wasn’t that the climax?” And then the movie keeps going. And then it just stops. And I realized the battle of the bands was the climax. It just kind of sucked and didn’t actually resolve anything. But then the movie just kept going to end at a random point 10 minutes later. No resolution. No ending. Maybe all that will be addressed in the sequel which never happened?