Black Friday is nearly upon us, and as always many home video labels are gearing up for the biggest online shopping day of the year. While Severin Films, Mondo Macabro, Massacre Video, and others are sure to have some great deals and surprises in store, nobody does Black Friday quite like Vinegar Syndrome. Here are some pointers for folks looking to take advantage of this cult/exploitation powerhouse’s generous yearly event: 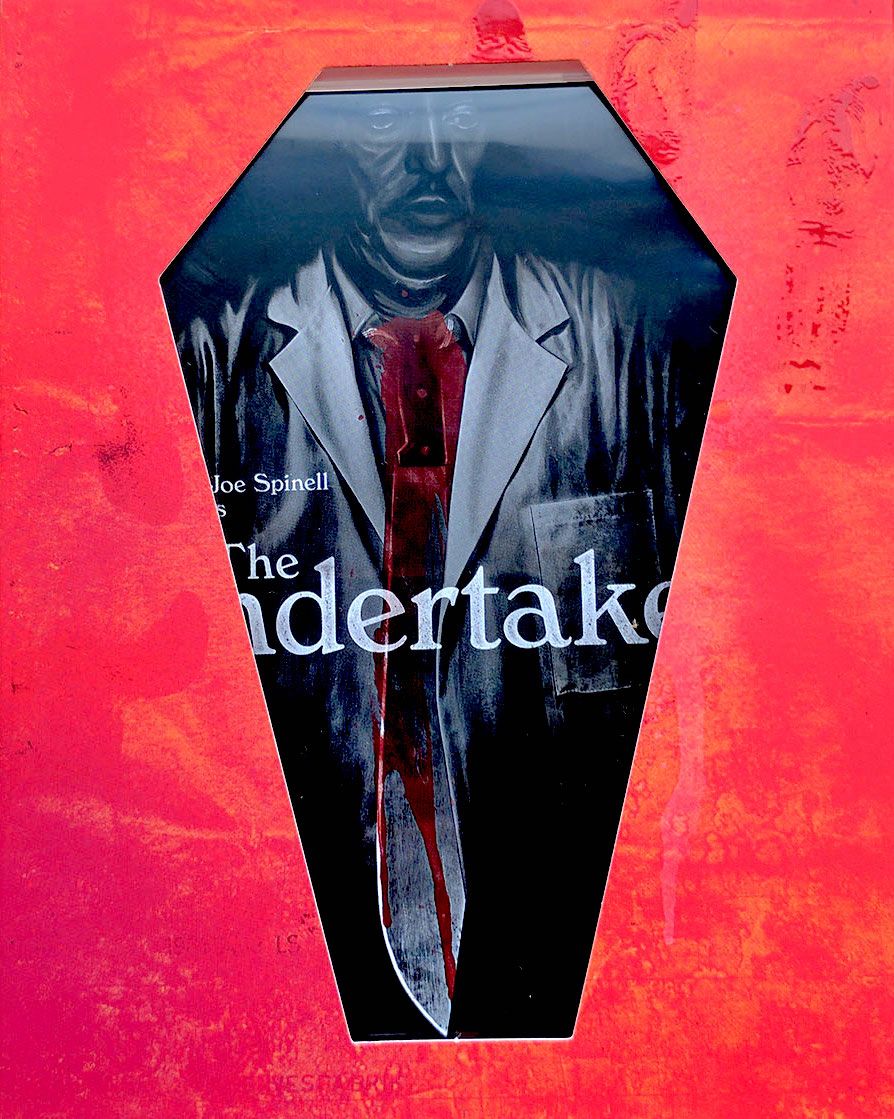 Each year Vinegar Syndrome drops secret limited edition titles during their Black Friday sale. This year there are two, and as usual there are a few clues but very little hard information on what they might be. Previous years have ranged from a limited edition of Joe Sarno’s ALL THE SINS OF SODOM to ’90s video store favorite JACK FROST (complete with limited lenticular slipcase!). These titles won’t be revealed until the sale starts, but whatever they are it’ll be worth it for any hardcore cult cinephile to take a peek when the sale kicks off. The only concrete clue Vinegar Syndrome has given is that neither of them are Troma productions, so adjust your expectations up or down according to your feelings about Troma! 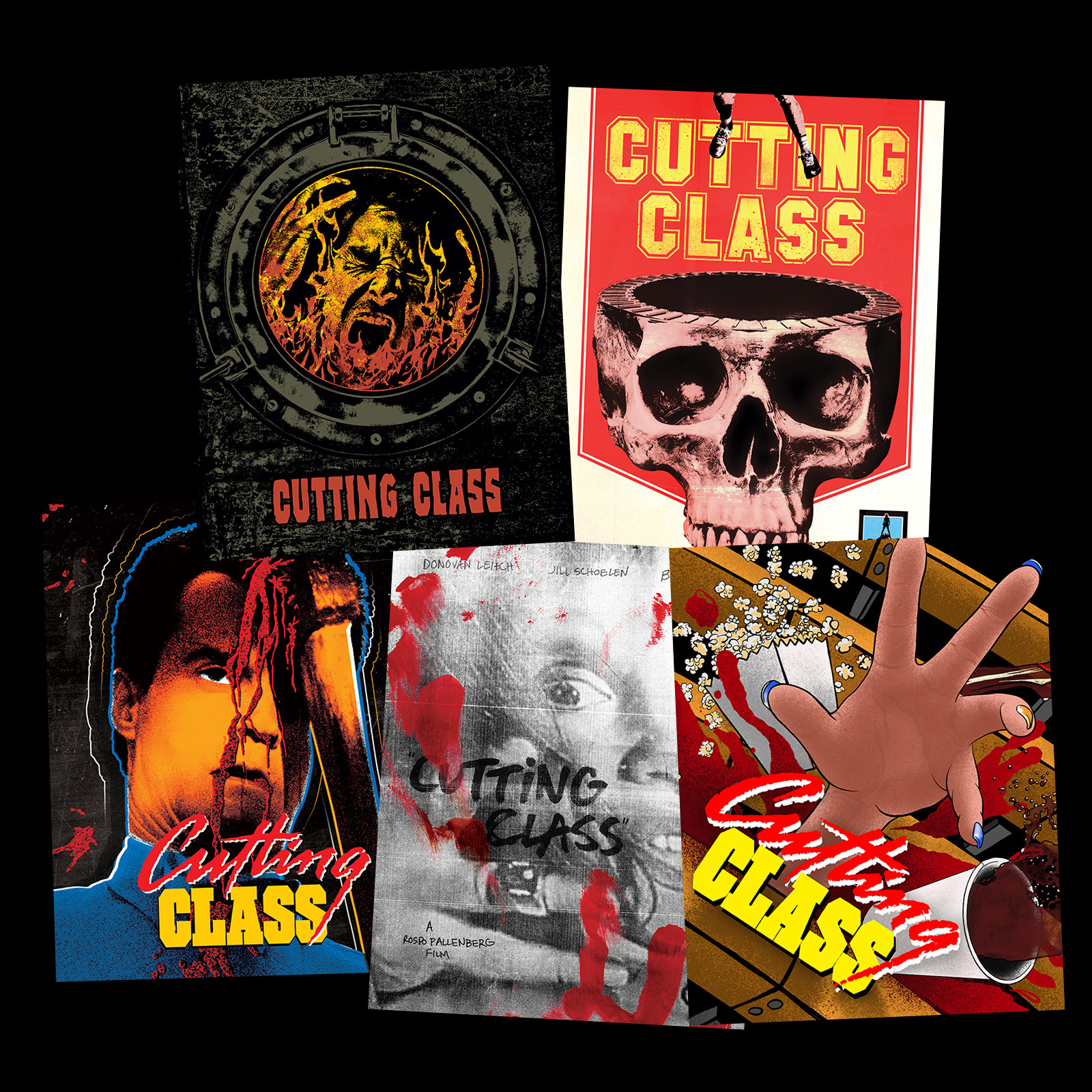 Shoppers have the option of buying any single limited slipcase of choice during the Black Friday sale.

Limited edition slipcases have become a major selling point for some physical media collectors over the years, and Vinegar Syndrome does great work here. However, even by Vinegar Syndrome standards the upcoming Black Friday-only release of CUTTING CLASS with five slipcases is pretty insane. Of course, shoppers can also opt to buy the disc–a 4K restoration of this ’80s cult classic starring a young Brad Pitt alongside genre star Jill Schoelen—with any one of the slipcases they prefer during the sale. To go one step further, Vinegar Syndrome has announced that any slipcases unsold during the Black Friday sale will be destroyed. After the sale, the only place to get one of these limited slipcase editions will be at The Archive, Vinegar Syndrome’s brick-and-mortar store. 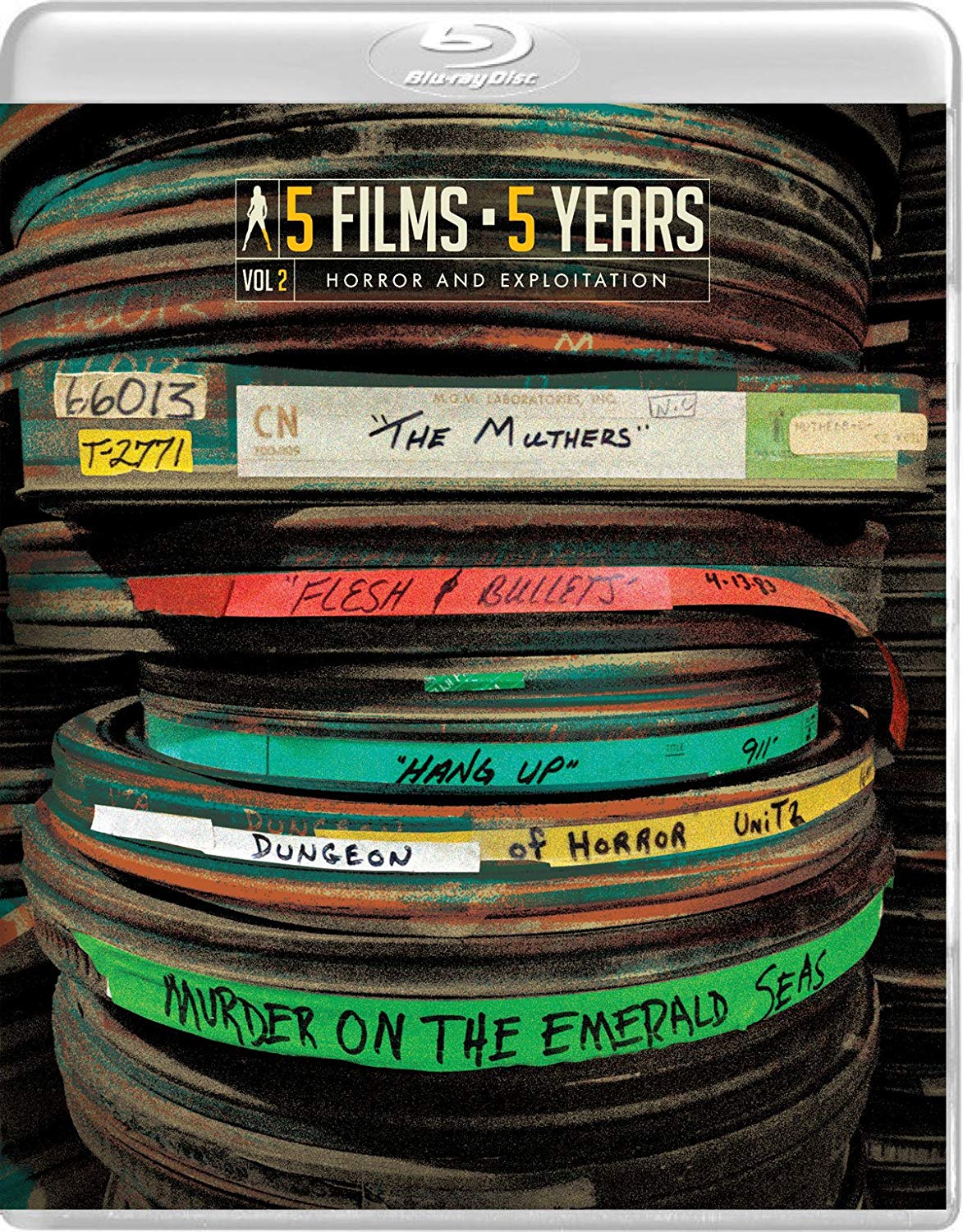 2018 subscribers got all four of the surprise “Five Years Five Films” sets as part of their package.

The Yearly Package is truly the Rolls Royce of Vinegar Syndrome Black Friday deals: a subscription that buys every release the company puts out for the following year. Naturally, this one is pricey, but it guarantees a copy of everything including limited editions and surprise releases. In years past, this has been offered in Blu-ray only or combined Blu-ray and DVD, but the company has made a major announcement for this year—they will no longer be releasing titles only on DVD. The home video collector’s market has shifted enough to Blu-ray that Vinegar Syndrome will only be releasing Blu-ray/DVD combos in 2019. There will still be two flavors of subscription, but now they’re delineated by release type: the Domestic Completionist and the Horror & Exploitation Package. The company is projecting they will be putting out 48 total releases in 2019, 38 of them in the Horror & Exploitation category and ten adult titles. While that Completionist package might look pretty steep at $780, it works out to just over $16 per release–and if previous years are any indication, there’s a good chance they will exceed their projected output. Some hardcore Vinegar Syndrome fans save up all year for this, and it would be tough to find a better deal anywhere that also directly supports a company doing great work in preserving cult/exploitation cinema history. 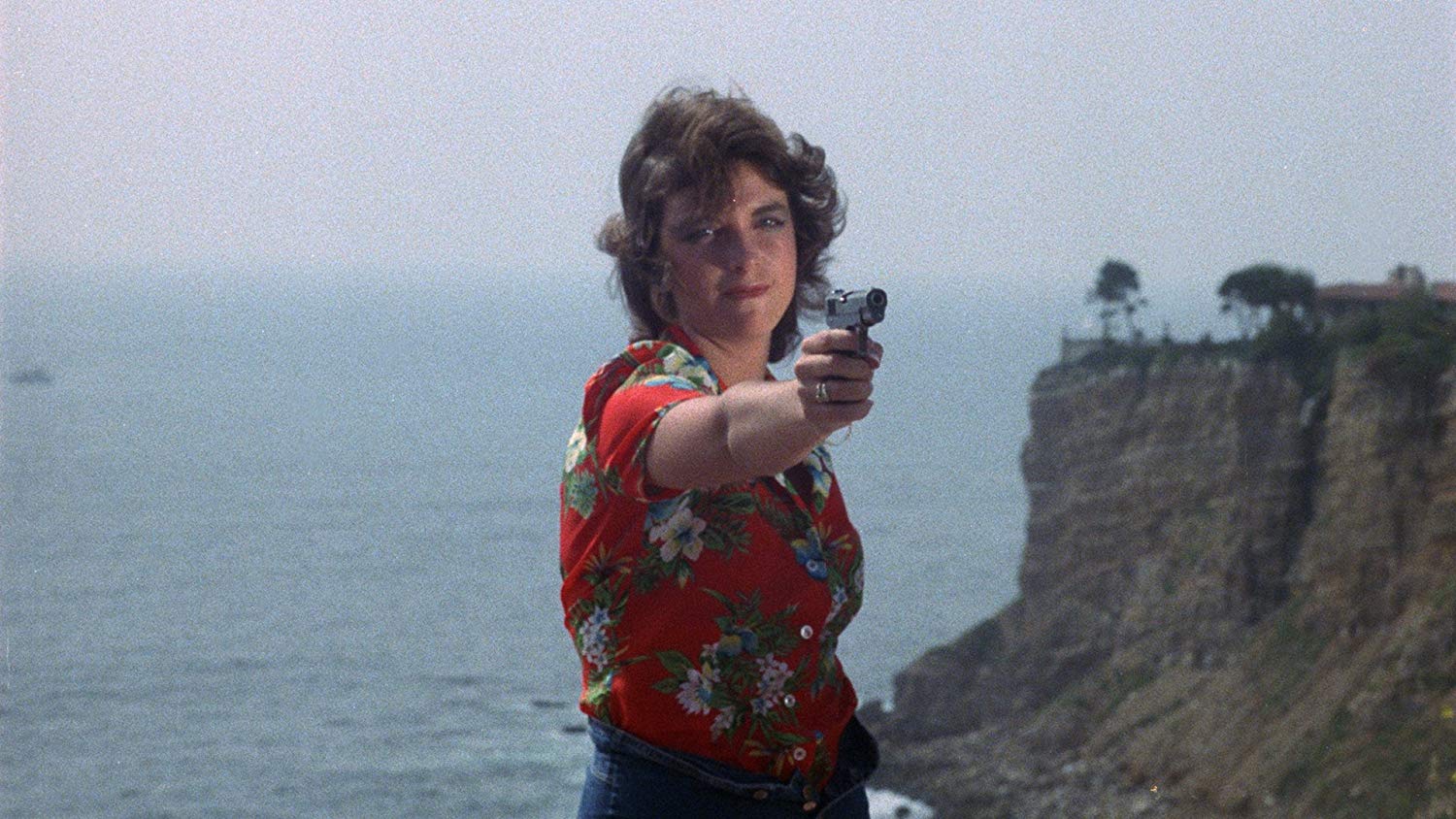 During the Black Friday sale, Vinegar Syndrome offers 50% off nearly every title in their catalog, and with their ever-growing list of adult, cult, and exploitation films trying to find just the right thing can be an intimidating task. Thankfully, they offer… 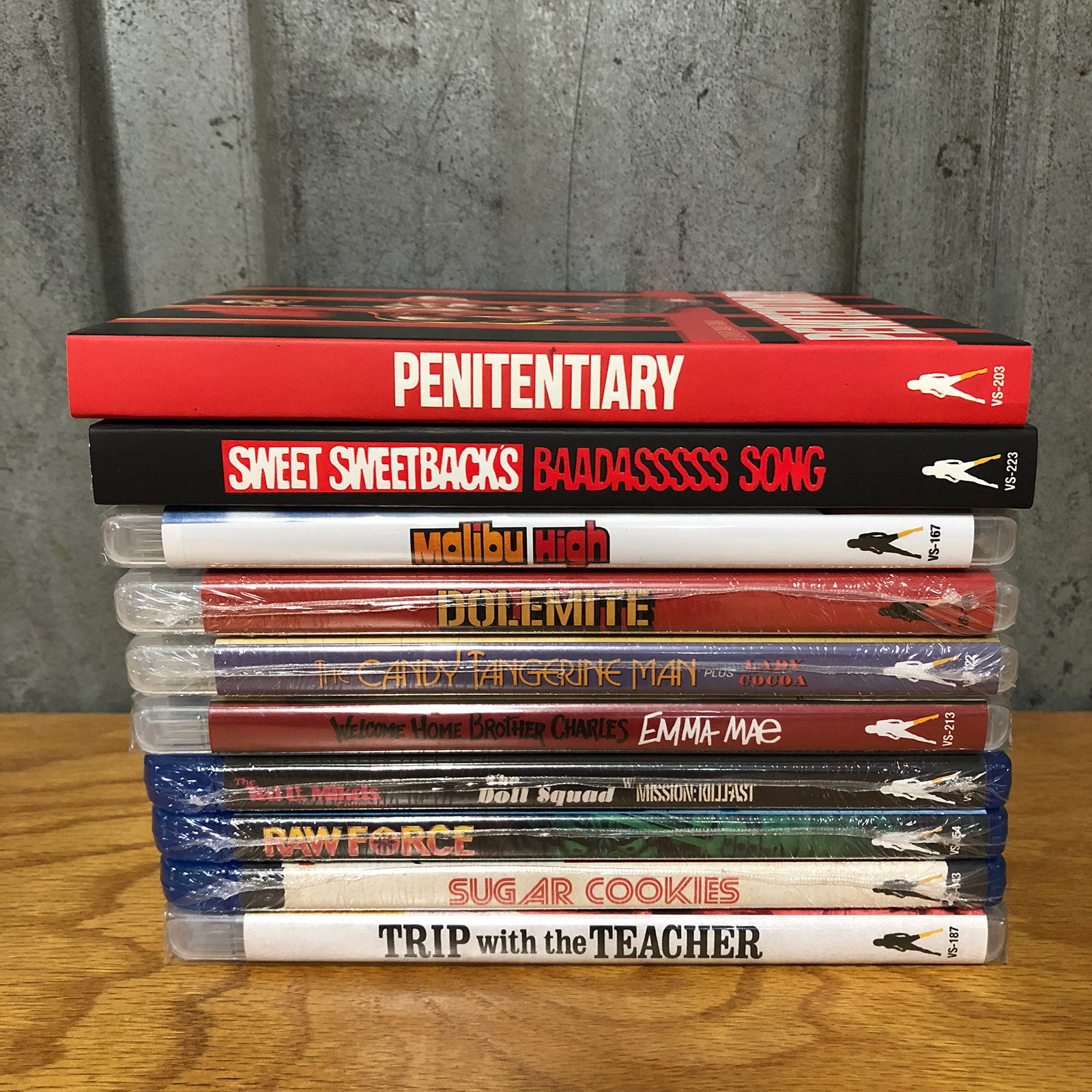 …or grab it as part of the “Action” Essentials collection!

The Essentials are hand-picked bundles of titles from the Vinegar Syndrome catalog that offer a perfect jumping-off point for anyone looking to take the plunge. These are sold through the Vinegar Syndrome web store year-round, but during the Black Friday sale they have an even bigger discount. Whether you want a crash course in horror, cult/exploitation, or adult films, they’ve got you covered. 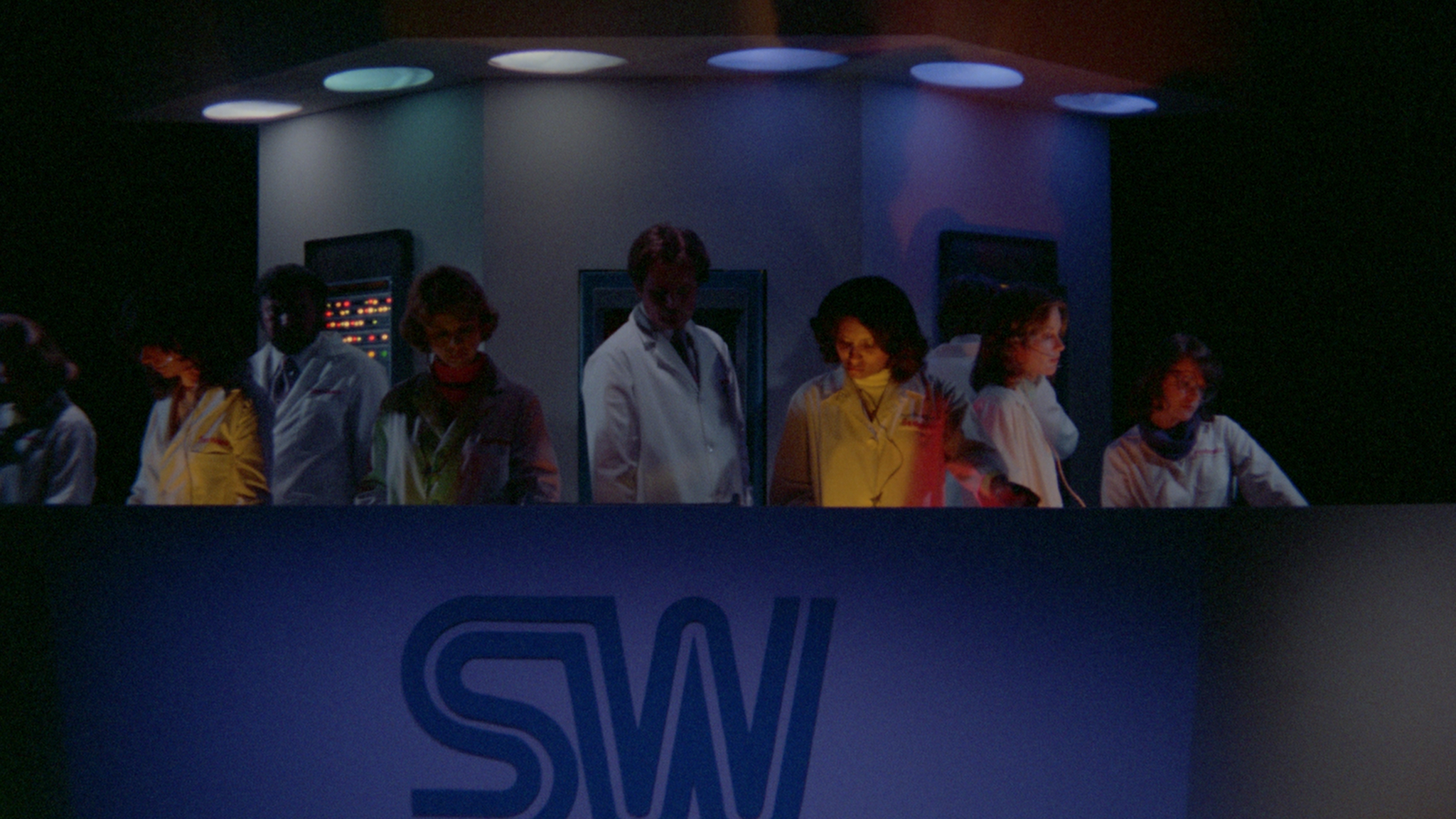 SEX WORLD is still one of the best films–adult or otherwise–Vinegar Syndrome has released. 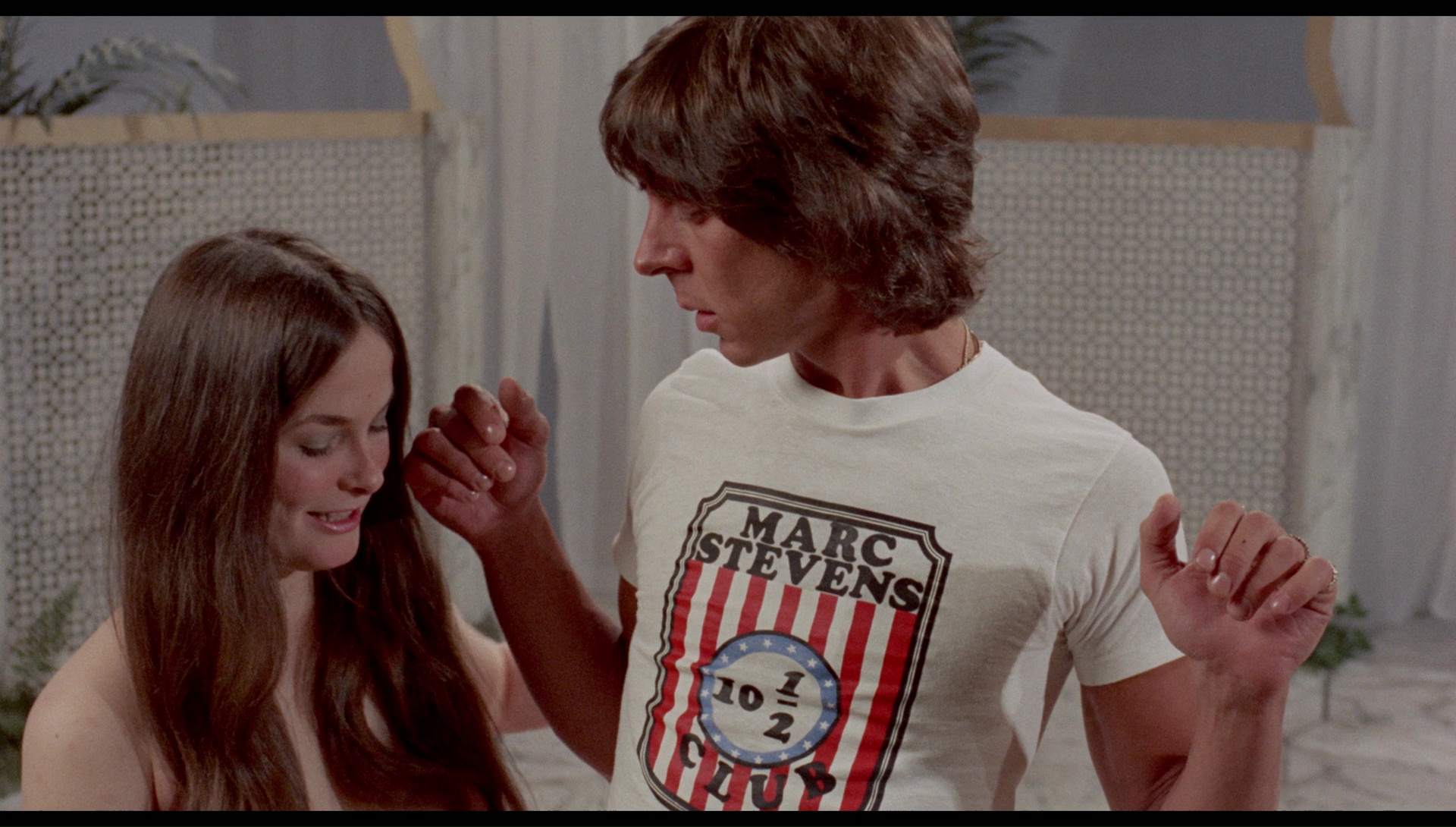 Joe Sarno is best known for his 1960s black & white sexploitation films like SIN IN THE SUBURBS, but he also made many hardcore films (frequently under pseudonyms) in the 70s and 80s. One of the best of these is A TOUCH OF GENIE from 1974, which is about as far from Sarno’s bleak 60s melodramas as he could have gone. This is a straight-up comedy about a nerdy antiques dealer named Melvin (Douglas Stone) who accidentally summons perky Genie (Chris Jordan) from her magic lamp and uses his wishes to take the form of his favorite porn stars (including Marc Stevens, pictured above) for sexual escapades. But things are a little complicated by the presence of Melvin’s nagging mother, and the fact that Genie has clearly fallen in love with him. Everyone here is given a chance to show off some surprising comedic chops, and as silly as it is there’s also something endearing in its earnest sweetness. It’s hilarious and weirdly, unexpectedly heartwarming in a way hardcore features rarely manage to pull off thanks to Sarno’s writing and a game cast. As usual, the film is presented in a gorgeous transfer and is fully uncut, making this the definitive home video release of one of the stranger entries in Joe Sarno’s imposing oeuvre. 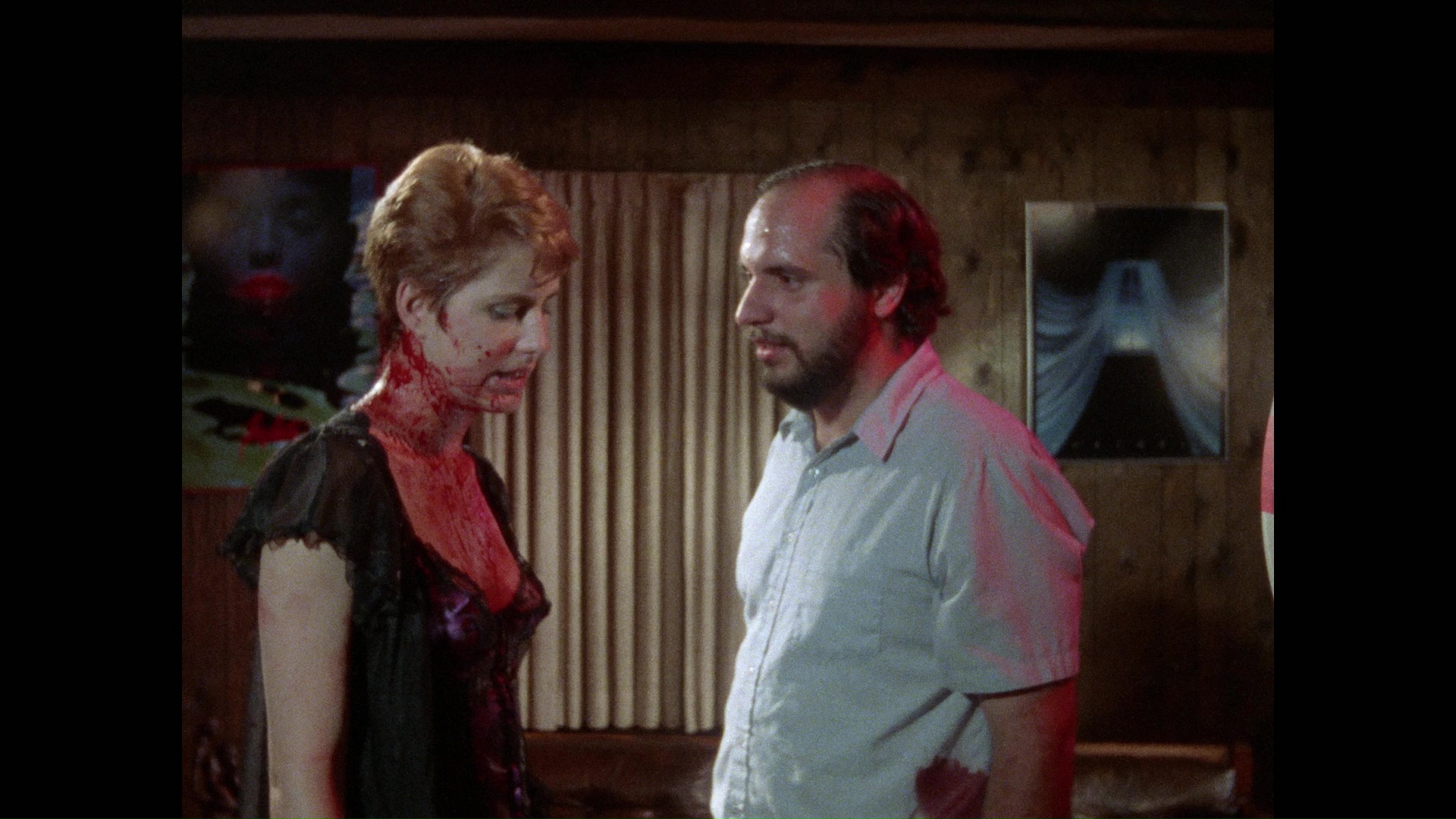 Another deeply goofy but oddly endearing film, PSYCHOS IN LOVE is a horror/comedy about two serial killers whose paths cross by chance. Instead of trying to kill each other, they form a connection over shared interests–namely how much they like to kill people, and how much they hate grapes. The movie works in large part due to a pair of solid lead performances by director Gorman Bechard’s frequent collaborators Carmine Capobianco and Debi Thibeault. They somehow manage to make these two characters sympathetic and even charming in their own way, elevating what would otherwise be a simple spoof into something more memorable. Vinegar Syndrome really went all-out with the special features on this one, including two commentary tracks with Bechard (one solo, one with Capobianco), interviews, photo & promotional image galleries, four short films by Bechard, a booklet with essays by Art Ettinger & Matt Desiderio, and much more. It’s a loving release for a little low-budget movie that puts some Criterion discs to shame. 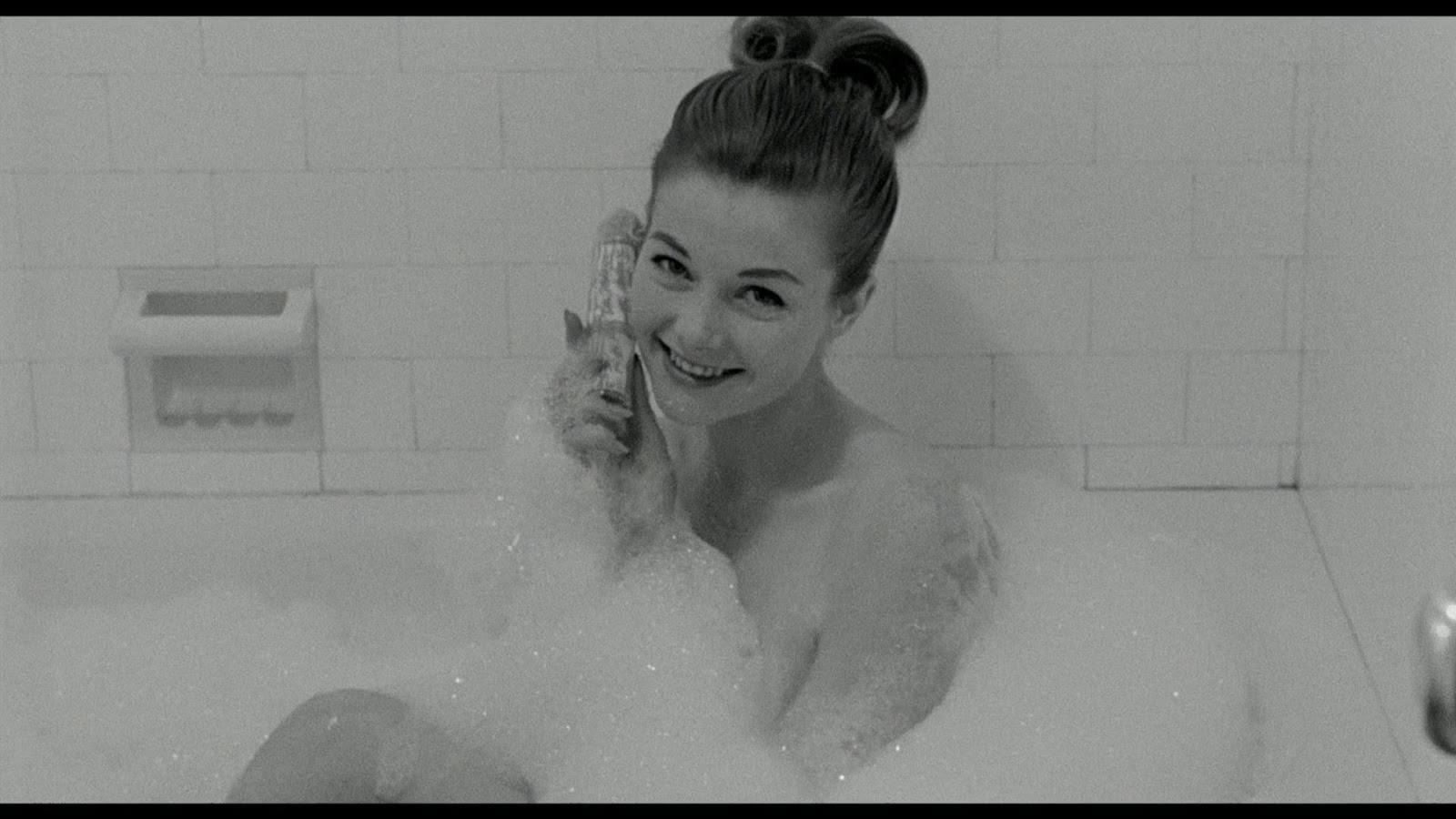 Any collector of Mill Creek’s copious multi-film sets of Crown International Pictures is probably more than familiar with PICK-UP, because they put it on every damned set they possibly could. There are no doubt many dedicated Crown International fans who own at least three or four copies of this movie, making the prospect of picking it up on Blu-ray iffy at best. Worse, it’s not a great movie–interesting, maybe, but not all that entertaining. The Vinegar Syndrome Blu-ray looks fantastic, of course, and is presented under the film’s original title PAZUZU, but the real selling point of this disc is one of its special features. THE ORGY AT LIL’S PLACE (1963) was long considered a lost film before a print of it surfaced in 2013. Bernard Hirschenson, director of PICK-UP, was the cinematographer on this proto-“roughie” that is nowhere near as lascivious as its title would suggest. However, it’s a fascinating and valuable historical artifact with some beautiful photography including an eye-popping finale in full color. Its appearance on home video is nothing short of a miracle, especially looking as nice as it does here. This is a stellar example of Vinegar Syndrome’s mission to rescue exploitation cinema history. 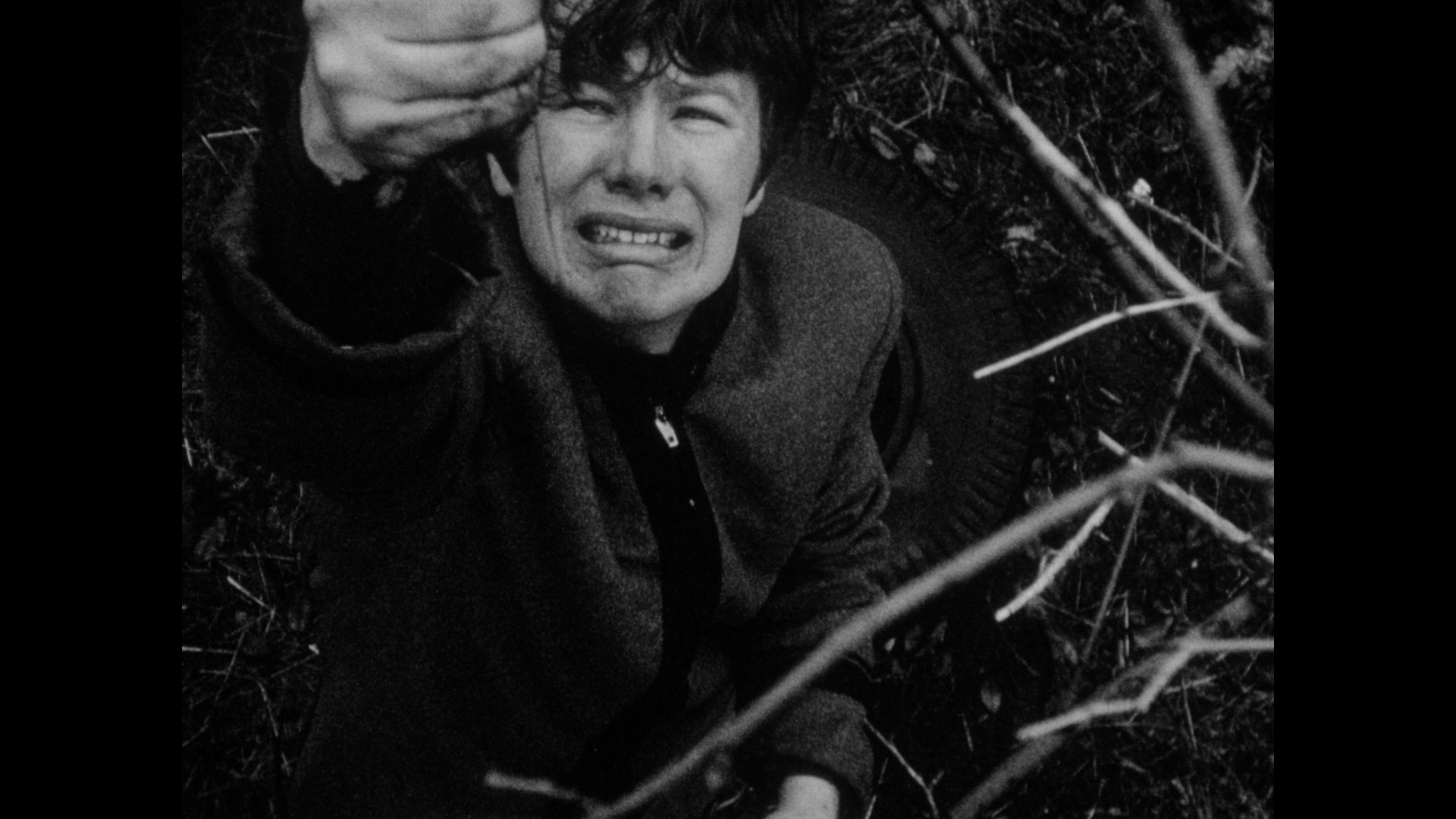 It’s worth noting here that PICK-UP is part of the company’s “Sexploitation Signature” series that unfortunately seems to have met an untimely demise due to low sales. This series featured a few of the company’s most noteworthy releases since the original “Definitive” list, including a stunning Blu-ray of Joe Sarno’s occult-tinged RED ROSES OF PASSION and another bonafide Holy Grail of supposedly lost exploitation cinema: Andy Milligan’s original version of SEEDS. Originally released in a butchered cut with totally unrelated softcore sex scenes as SEEDS OF SIN, Milligan’s original vision is maybe the ultimate example of his obsessions and aesthetic. Without those lengthy sex scenes to break up the action, SEEDS feels like a claustrophobic no-budget precursor to Zulawski’s POSSESSION–it’s all merciless sniping, inexplicable genre trappings, and shrieking rage. It’s a harrowing, exhausting viewing experience, and it’s no wonder the film’s original distributors refused to release the film as Milligan delivered it. Vinegar Syndrome’s restoration of the film is nothing short of a revelation, and one of the most important exploitation home video releases of the last several years. The disc also includes a nicely cleaned-up transfer of SEEDS OF SIN and a new restoration of Milligan’s debut short film “Vapors.” Any serious student of “grindhouse” cinema needs to have this in their home video library. 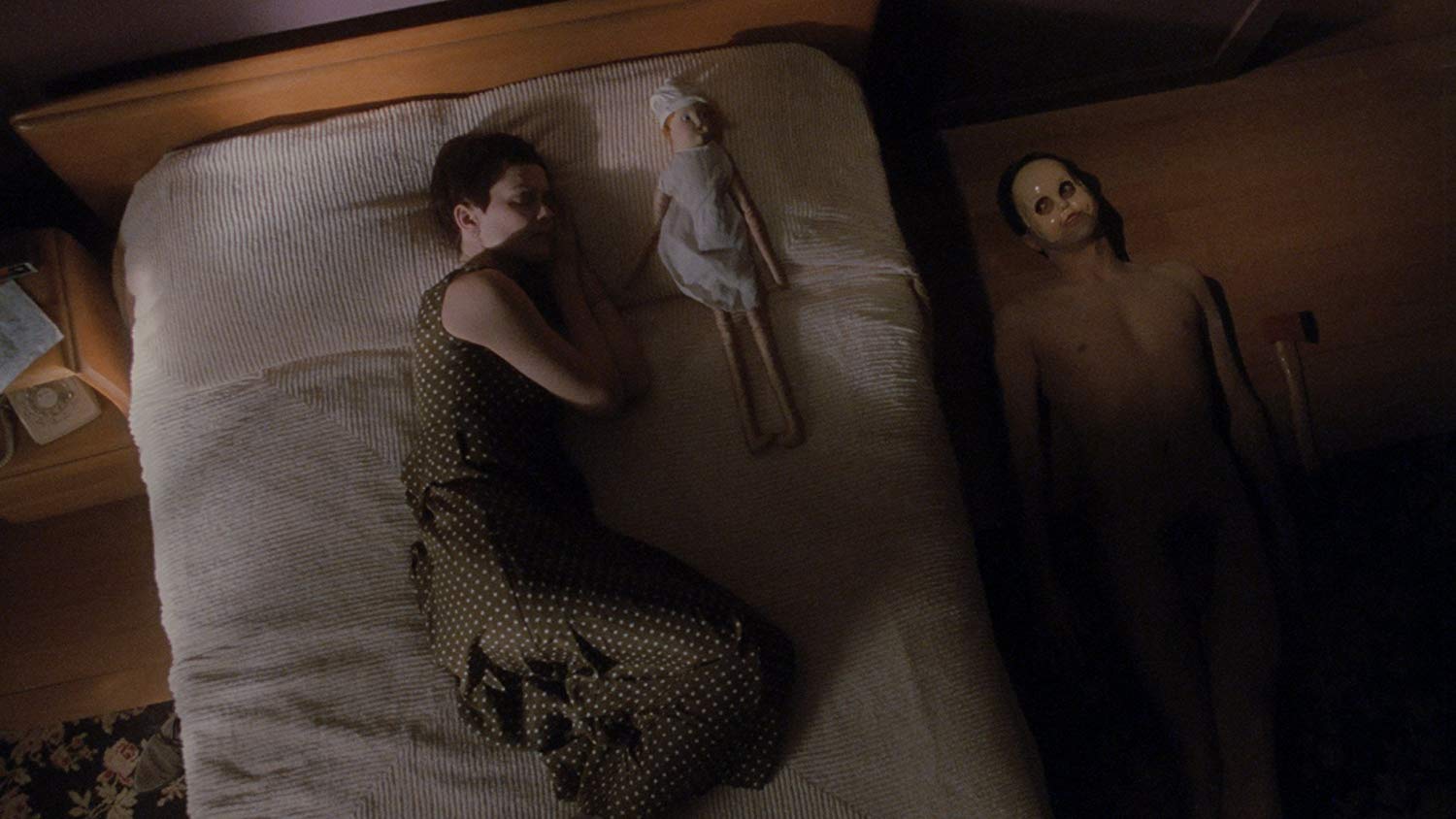 While most of Vinegar Syndrome’s output consists of films released from the 60s through 80s, there have been some notable exceptions in genre cinema. STAR TIME was originally released in 1992 and had all but disappeared for most audiences, even video store-era horror fans. It’s not hard to see why this movie was a tough sell in 1992–it’s less slasher and more character study, albeit one with a surreal and horrific bent. Following the cancellation of his favorite sitcom, Henry Pinkle (Michael St. Gerard) stalks the streets of Los Angeles aimlessly until he receives a mission from television personality Sam Bones (John P. Ryan) that will make Henry a star. Between murders and hallucinations Henry occasionally meets up with his former social worker Wendy (Maureen Teefy), who begins to suspect something is very wrong. But can she help Henry, or will he choose “stardom” over sanity? This is a creepy slow-burn with some great, tense set pieces, and it’s a film that likely would have languished in obscurity if it weren’t for Vinegar Syndrome unearthing it for new audiences. 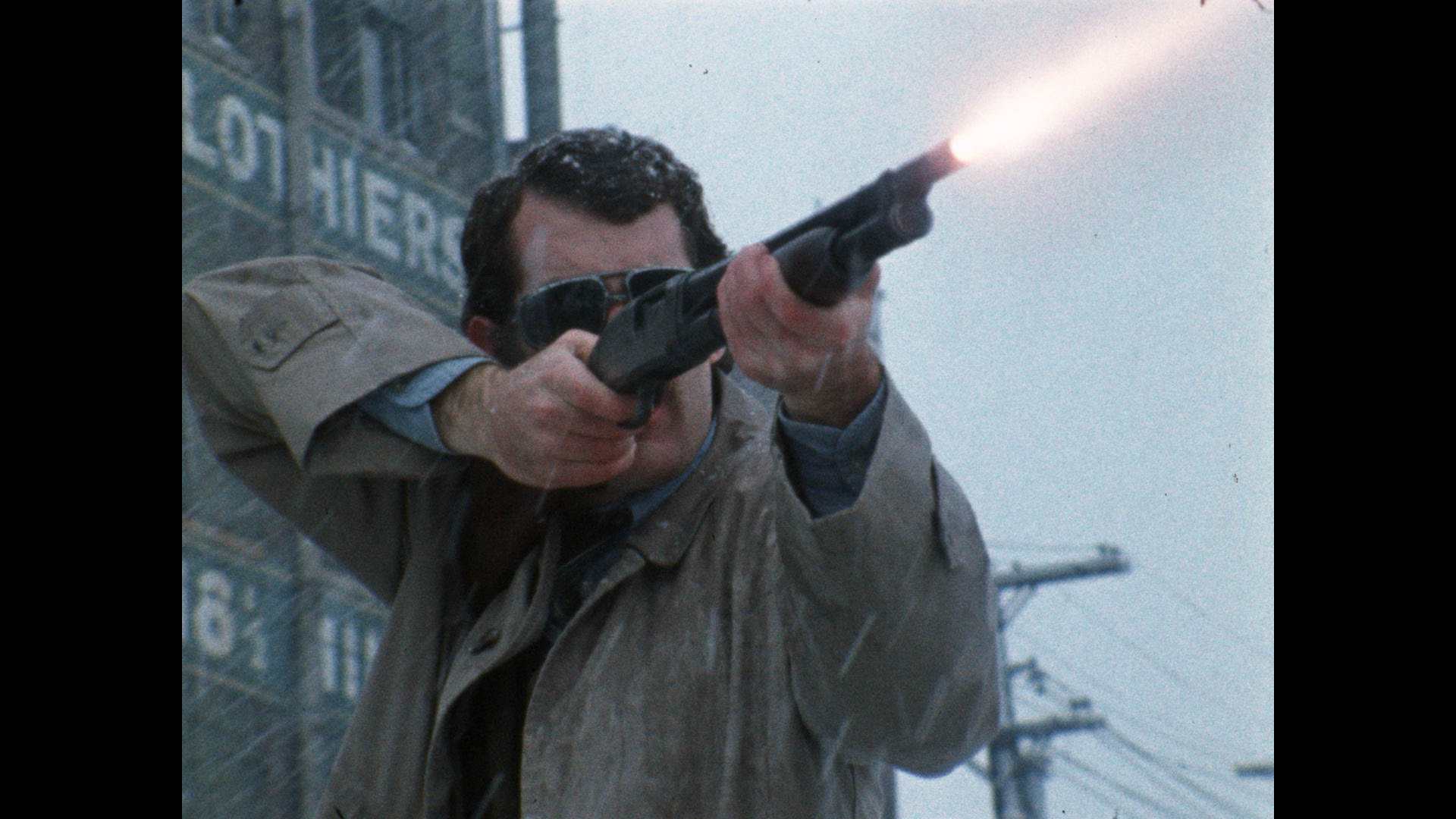 Another recent discovery of Vinegar Syndrome that came out of nowhere for almost everybody was 1973’s SHOT, an action movie shot in Champaign, Illinois by students and alumni of the University of Illinois. A couple of cops who don’t follow the rules are out to get a local drug kingpin by any means necessary, and they’ll tear all of Champaign apart if they have to! This is a crime drama from people whose only exposure to police procedure was probably mostly from DIRTY HARRY and episodes of THE STREETS OF SAN FRANCISCO and BANACEK. You get a pretty good snapshot of the area in the early 1970s thanks to plenty of location shooting and long chase scenes, often shot from a helicopter that gives the impression of a much higher budget than these folks undoubtedly had. My friend Jef Burnham referred to SHOT as a feature-length version of the Beastie Boys’ “Sabotage” video, an observation so eerily accurate one might wonder if this little regional action film was a direct influence.