It’s reasonable to assume that the THE RAY BRADBURY THEATER wasn’t developed to be an ongoing enterprise. The six episodes that were developed for HBO were aired over a period of a year – in two “packages” of three episodes – and while they were occasionally impressive, once 1987 came and went without an episode, it appeared as if the series was finished. An entertaining experiment that was not to last.

However, perhaps improbably, the series was resurrected in 1988 by the USA network; which was looking to expand and move away from the sports programming it was founded upon. Maintaining the framework (and opening credits) of the HBO version, the shorts were expanded into a full-fledged series, with Season two (or three, if you consider each HBO three-pack to be a season) containing 12 episode and following the format set out by the initial six. Each episode would be a Bradbury short story dramatized by the author himself, and featuring a mix of established Hollywood names and Canadian faces.

As the second season started in early 1988, the feel and tone of the series remained very similar to what had been established. We start with two very different portrayals of obsession, and the way it can consume (and destroy) those who are unable to overcome their individual paranoia. These are both episodes I remember seeing as a youth, with the second (in particular) having a massive effect on my psyche at the time. The final shot is one that I carried with me for many years afterwards, and I approached the episode with no small amount of dread. Let’s see if it was earned… 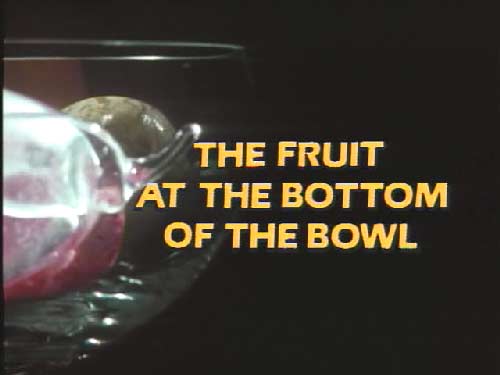 Episode 1 – The Fruit at the Bottom of the Bowl

Originally published under the title “Touch and Go”, Bradbury’s “The Fruit at the Bottom of the Bowl” begins – uniquely – with the murder already having taken place, and with the readers inside the head of the murderer (the cuckolded William Acton). As his frayed thoughts spit out, some of the events leading up to the killing begin to get revealed.

Discovering that his wife was having an affair, Acton confronted the wealthy Donald Huxley; who proceeded to give Acton a tour of his home, eventually leading to the two fighting and Acton strangling Huxley to death. We see Acton begin to retrace his steps throughout the house, and his realization that his fingerprints coat the place. After a frantic search for a pair of gloves, Acton goes to work polishing and cleaning the surfaces and items he may have touched – but his obsession with the impossibility of wiping clean what he has done starts to push him over the edge. Eventually he find himself repeatedly cleaning the wax fruit at the bottom of a bowl; despite him never having touched them in the first place. The story ends with an officer discovering Acton in the attic, having deliriously cleaned every item in the house.

Seeing guilt as a literal stain to be wiped clean is hardly a new concept, but Bradbury’s choice to focus so entirely on the fractured mental state of Acton makes for one of his most unique and fascinating stories. It also makes for a natural choice to adapt, though it provided some interesting challenges. When Johnny Craig translated it into comic book form, he took the dialogue almost directly from Bradbury’s original; and in fact it’s more an illustrated and condensed version of the story rather than a traditional comic tale. A television adaptation would either require a lot of voice-over (which could get a bit exhausting), or an actor that could realistically present mental anguish.

Thankfully, they took the latter path and cast an uncharacteristically nebbish Michael Ironside in the role, with the actor bringing his trademark sweaty intensity to a part that mostly requires him to look overwhelmed and talk to himself. He’s paired with the sublimely slimy Robert Vaughan in a beefed up version of the Huxley role. In this version, we’re treated to a number of flashbacks which show Acton entering the house; carrying an unloaded pistol to frighten Huxley away from his wife. These flashbacks are incorporated uniquely, with the action presenting itself as Acton revisits the rooms he smudged up before the murder.

Unfortunately, the climax of the story has been neutered somewhat by the choice to reveal that the character of Huxley was suffering from terminal cancer, with the suggestion being that he intentionally had Acton leave his fingerprints around the house. It’s a fairly interesting twist, but rather betrays the original idea of the guilt itself feeding on and tearing away Acton’s psyche. Since his mental state isn’t as completely revealed, he’s already a much less sympathetic character than in the original story, and the ending just makes him seem like a sap.

Not a perfect adaptation, but director Gilbert W. Shilton (who has extensive television experience) does a fine job keeping the action moving in the tight quarters, and Ironside is always wonderful to watch.

And “The Fruit at the Bottom of the Bowl” is an infinitely better title than “Touch and Go”. 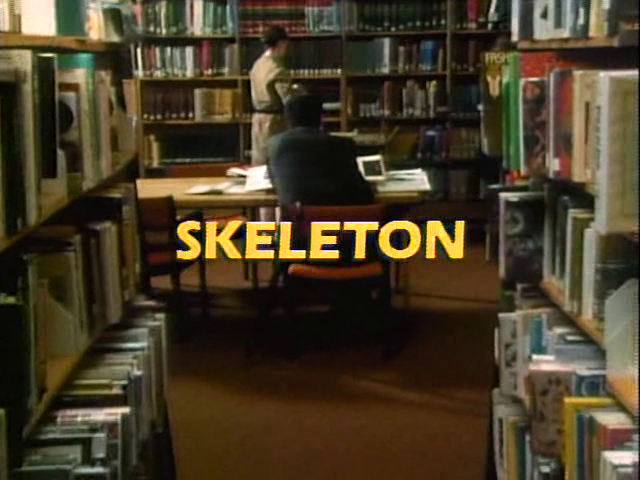 Remember in the initial column, where I mentioned that there were episodes of The Ray Bradbury Theater that terrified me as a kid? Well, one of them was Season 2’s “Skeleton”, which features SCTV’s Eugene Levy as a hypochondriac who becomes increasingly convinced that his body – and his skeleton in particular – is trying to kill him.

Continuing the theme of obsession, “Skeleton” features a character with a much less tangible enemy: himself. Or, at least, his bone structure. Mr. Harris is a hypochondriac who becomes increasingly convinced – despite the protestations from his wife and doctor – that his body is revolting against him. After a visit with the mysterious bone expert Dr. M. Munigant, Harris begins to see his body and skeleton as two separate – and competing – entities. As his increasing fear causes him to lose weight, he interprets it as his skeletal side becoming more visible, and desperately calls Munigant to his house to perform an experimental procedure.

The final moments of both the short story and episode are thoroughly horrific. Harris’ wife Clarisse returns home to discover that Dr. Munigant’s procedure has left him entirely without a skeletal structure. In fact, Munigant is shown to be some sort of demonic entity that actually munches on the bones like breadsticks. The final lines are particularly chilling:

Many times as a little girl Clarisse had run on the beach sands, stepped on a jellyfish and screamed. It was not so bad, finding an intact, gelatin-skinned jellyfish in one’s living room. One could step back from it.
It was when the jellyfish called you by name…

*shivers* Bradbury wrote “Skeleton” after complaining to a doctor that his neck and throat felt strange. The doctor’s response was that it was likely ‘A bad case of discovery of the larynx’. A hyper-awareness of body parts, which are then touched and poked and prodded until sore. This scenario is repeated, somewhat comically, in both the original short story and Ray Bradbury Theater adaptation.

In fact, the tone of both is blackly comedic, resembling the macabre tone of Bradbury’s young adult work. There’s a glint of humor that runs through the events on the page, and the casting of comedy legend Eugene Levy in the lead would suggest that the episode would suggest a humorous intent. But the episode is actually quite dour, with only the scene where Harris converses with an overweight bar patron in the hopes of learning how to fatten himself up maintaining the winking tone of the story.

It’s also one of the few adaptations which has a significant amount of material cut out. In the short story, Harris’ descent happens much more slowly, with a trip to Phoenix – and a subsequent car crash – being a contributing factor to his decision to return to Munigant. In the episode, the breakdown appears to happen over a period of a few days, with Harris’ initial trip to Munigant’s office being extended to show off some neat production design (and a wonderfully skittish Peter Blair as Munigant).

But it’s those final moments that I remember most from my childhood. Encompassing the most complex special effect in the series up to this point, the gelatinous, still-living remains of Harris haunted me for years after seeing the episode. And while it’s not going to be confused with the work of Rick Baker or Rob Bottin, it remains an effective, disturbing moment that effectively brings Bradbury’s ending prose to life.  I mean, just look at it: 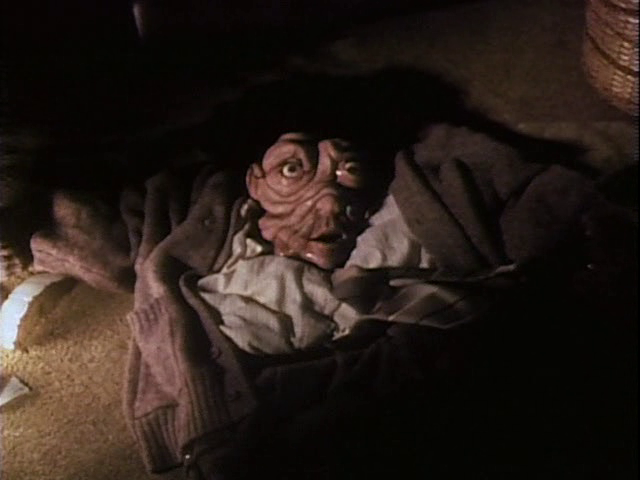 It’s a forgettable episode, and a weak translation of an interesting story, but those final moments still pack a punch. While these episodes don’t pack the punch of the best of the first season, they mark a commitment to maintain the varied styles and tones of what has come before; and that has me curious – and a bit anxious – to see what is coming next.