I’ve written previously about the tonal shifts that mark both Ray Bradbury’s short stories and the episodes of The Ray Bradbury Theater that pull from them. While entrenched firmly in the familiar fantasy, science-fiction and horror camps, the sort of stories being told in Season 2 of the show vary wildly, which can make watching batches of episodes together a jarring experience. Most anthology shows could follow up an explicitly horrific episode with something more sedate and contemplative, but few mix and match quite so haphazardly.

This week’s episodes both feature explicitly horrific content, but they differ in such fundamental ways that they could easily come from two entirely different shows. As individual episodes of The Ray Bradbury Theater are meant to act as short films – with distinct opening and closing credits – there’s little that connects them together outside the varied interests of Bradbury. In this case we get one episode marked by dark humor, while the other is played entirely – almost deathly – seriously. One is from the perspective of a precocious child, while the other from the perspective of a group of struggling adults. It highlights both the difficulty and benefit of the anthology format, as we simply never know what we’re going to get. But when things are as inconsistent as they are in this series, that can start to make even a patient viewer rather weary. 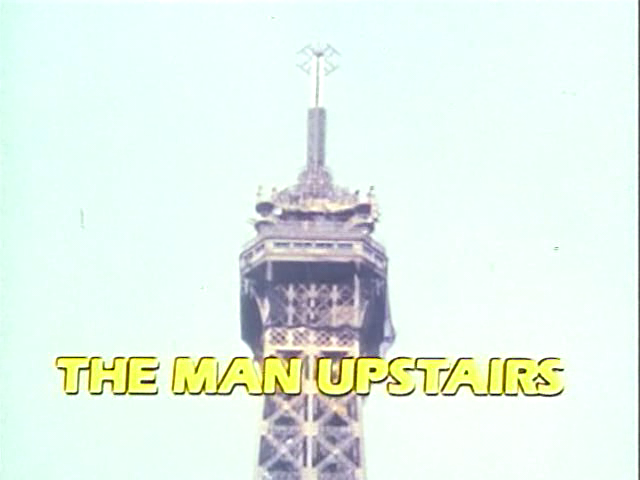 It’s easy to tell when Bradbury is pulling from personal recollections and memories in his work, as the descriptions get so vivid and distinct that they couldn’t possibly be entirely fabricated. Such is the case in his truly bizarre short story “The Man Upstairs”, which is peppered with details about a young boy’s fascination with his grandmother’s culinary skills. That the gutting and trussing of a chicken is then used to influence a similar act on a person is just another of those bits of macabre humor that makes Bradbury’s work such a treat to read.

Like “The Screaming Woman”, “The Man Upstairs” features a child protagonist who happens upon some information that is simply dismissed by the adults of his/her world. In this case we follow the young, unshakable Douglas, who comfortably helps out at his grandparents’ boarding house but finds himself disturbed by the arrival of Mr. Koberman, a strange gentleman who decides to rent an upstairs room.

Immediately taking a dislike to the man, Douglas witnesses his odd behavior; sleeping during the day, using only wooden utensils, and his intense aversion to touching anything silver, and soon begins to suspect that something is amiss with the visitor – particularly when he hears of a series of murders around the area. His suspicions come to a head when – casually watching Koberman through the colored glass of an upstairs window –  Douglas seems to be able to see through his skin, and witnesses his odd arrangement of internal organs. The story ends with the suspicious Douglas slicing upon the man while he sleeps and pulling out gelatinous, oddly-shaped innards (which he proudly displays to his grandparents) before filling the crevice with his collected silver coins.

Pretty odd, eh? It’s not every day you read a short story which involves an 11 year old yanking out the guts of a proto-vampire. The story works not just because of the potency of Bradbury’s descriptions, but also because of the wicked streak of humor that permeates the whole tale. Douglas is precocious, and often purposely annoying, and is filled with both a child’s sense of wonder and mischievousness. That his ridiculous hunches turn out to be correct rightfully baffle his family and the coroner at the end (who quips “I think Douglas made a wise investment”) and plays well into the fantasies of youth. It’s  like a particularly dark Boys’ Own story, and Bradbury cleverly maps out the whole thing with a playful glint in his eye.

Sadly, its translation to television loses much of what makes the story such a raucous pleasure to read. The setting has – oddly – been changed to Paris, France (likely due to the fact that this season of the show is a US/Canada/France co-production), and has been brought up to modern day. The character of Douglas is now slightly older, and we get only glimpses of his curiosity about his surroundings. Even worse, his antics towards Mr. Koberman (played wonderfully by the great Féodor Atkine) seem entirely malicious when removed from an explanatory inner monologue. While Koberman is immediately eccentric, the child’s behavior comes off as intentionally cruel.

But the biggest issue is with the character of Koberman, who is rather generally ghoulish in the original story but has now been made more explicitly into a vampire – including the usual aversion to sunlight and the draining of blood of his (supposed) victims. We never actually see these attacks take place. In fact, aside from some photos in Koberman’s room of him by an under construction Eiffel tower which suggest that he’s over 100 years old, there’s precious little proof that there’s anything supernatural about the visitor. Instead of colored glass, Douglas views Koberman’s bizarre internal structure using a pair of toy binoculars, and the effect looks particularly cheesy and unconvincing. We do get a good look at these internal organs during the eventual vivisection, but they make for an oddly bloodless reveal.

Much of the blame for the blandness of the episode has to go to Bradbury’s script, which needlessly updates the events while taking away many of the biographical pleasures of the original text. This is compounded by some weak acting – Adam Negley as Douglas exhibits the worst traits of child actors – and some truly spotty direction from director Alain Bonnot. There’s a dinnertime scene that is edited so awkwardly that it’s hard to tell what is actually going on, and the final scene – meant to be a blackly humorous coda – completely flops due to some strange pacing and dubbing. Aside from the Eiffel tower plot point, the Paris setting adds nothing to the proceedings. The material is ripe for adaptation, but sadly this one flounders. 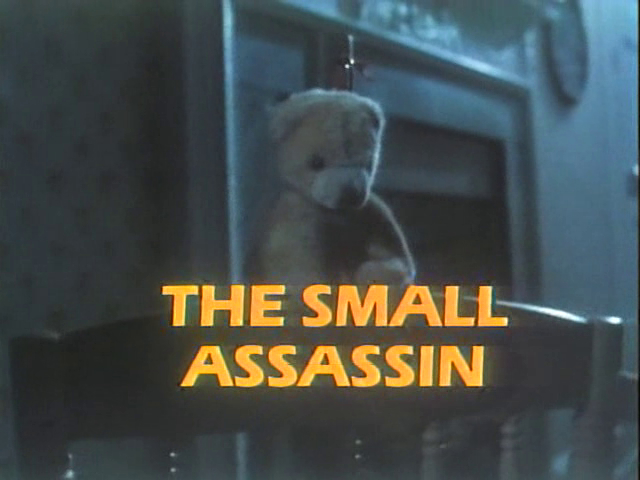 My recent reading of “The Small Assassin” was my first, and it left me absolutely chilled. One of Bradbury’s darkest and most ghastly stories, it covers some familiar ground: a disintegrating  relationship, postpartum depression, fear of death – but packages it in such a distressing way that it’s hard to believe it was originally published in 1946.

Likely the most clearly horrific of his work yet covered on the series, it was also adapted into comic form in 1953 – and works rather shockingly well in the format. In fact, the final sting might even more effective than in the original version.

After nearly dying during child birth, Alice Leiber finds herself terrified of her new child, whom she is convinced is intentionally trying to kill her. Her worried husband David takes advice from their family doctor, Dr. Jeffers, who reassures this is simply part of a normal adjustment period. Her agitation and suspicion of the baby increases, culminating in a bout of pneumonia that she blames on the newborn’s endless nighttime crying. While David is reasonably dismissive at first, after nearly slipping on a patchwork doll while checking on the child one night, his own suspicions start to grow. These suspicions are tragically confirmed when he returns home the next day to find Alice dead from a broken neck; having slipped on the very same doll. David communicates his fear to Dr. Jeffers, who initially dismisses such possibilities and prescribes David some sleeping pills to help him rest. The next day Dr. Jeffers stops by the house and makes a terrifying discovery, and is forced to make a horrifying decision.

The idea of a malevolent or demonic baby is nothing new; though Bradbury’s story pre-dates Ira Levin’s novel “Rosemary’s Baby” by more than twenty years and THE OMEN by thirty, but what’s unique here is the motivation for the child’s disturbing behavior. He’s not possessed by a demon or the child of Satan, but instead his motivations rest on resentment from ever being born. Being torn from the “peace and safety” of the womb and shoved into this “lousy world”, as suggested by David Leiber after his wife’s death.

It’s an awfully cynical thought from a 25 year old Bradbury, and while the central conceit of the story – that one child in a million might have enough awareness at birth to immediately resent its parents – might seem laughable, the crumbling of Alice’s psyche and the eventual terrifying realization of what is occurring makes for a very memorable  – and disturbing – tale.

Adapting such a story for live action presents several unique challenges. Should the child’s actions be shown? How clear should its  motivations be? Should it remain a mystery whether much of the story is simply playing out in Alice Leiber’s traumatized mind? Even more difficult is how you should show the child’s actions without it looking ridiculous. Remember that we’re talking about a child that is weeks – not years – old.

Thankfully, director Tom Cotter covers the action with quick cuts and implies much of the movement rather than showing it directly. Bradbury’s script sticks to the structure of the story rather faithfully, though changes the order – and methods – of death. It’s now David who takes the tumble down the stairs,  and Dr. Jeffers – played by reliably terrific Cyril Cusack – goes from openly scoffing at the idea to accepting (and trapping) a murderous baby rather quickly.

There’s also a strange sequence where Alice admits to the doctor that she remembers all the details of her own birth – including her initial resentment – which suggests that perhaps the actions of the child might be at least partially hereditary. It’s an unnecessary bit of exposition that attempts to give logic to something that was much better unexplained.

Cotter does bring some style to the tale, thanks to some lengthy Steadicam shots that suggest we’re viewing things from the infant’s POV, but there’s just something about the pacing that feels off and, once again, the final moments fall flat compared to both the original story and the comic adaptation. Perhaps it’s a limitation of resources, or simply the usual difficulties of adapting for television, but even with Bradbury adapting the recent episodes have felt neutered and almost entirely toothless. Hopefully in our upcoming episodes we’ll find some directors willing to bring some much-needed energy to the material.