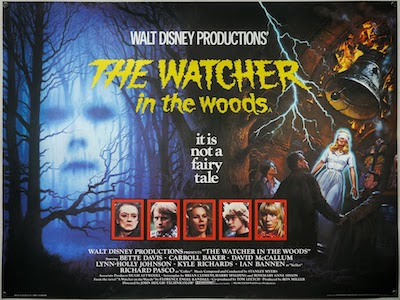 [Note from 40 Oz To Feardom writer Greg Mucci: There’s horror, and then there’s kinderhorror, a conjoined twin of the aptly titled kindertrauma in which horror deeply effects you at an inappropriately tender age. Films like THE WITCHES and SOMETHING WICKED THIS WAY COMES can all be filed under kinderhorror—their fairytale guises luring unsuspecting kids who put their guard down. One such title that ranks among these heavyweights is THE WATCHER IN THE WOODS. For this edition of 40 Oz. to Feardom, I thought I would hand over the reigns to Daily Grindhouse editor and contributor Rob Dean, who, unlike me, grew up with the film; its full effects working a particular magic that I can only feel through the lens of another.] 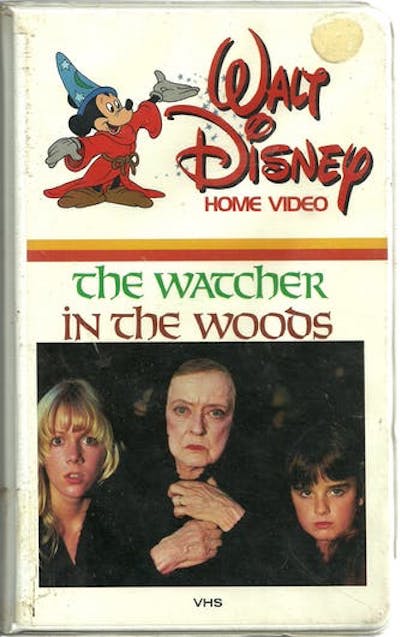 I wasn’t around when WATCHER IN THE WOODS was released (either time). I grew up alongside the VCR boom of the ’80s. Since home media was still novel in the middle of the decade, studios would attach a long preview of old and upcoming titles that would soon be available for people to watch in their homes to incentivize them to buy a player and more tapes. The ’80s Disney sizzle reel highlighted classics as well as exciting new additions coming to VCRs everywhere. In that hype footage, there were scant seconds from a film I couldn’t recognize at all. All I knew was this imagery was incredibly weird and unsettling:there was one movie that stuck with me.

Eventually I did track down and watch THE WATCHER IN THE WOODS. While I was fairly confused and mostly let down, the movie stuck in my head for decades—like an unsolved mystery. The ending hits and I had no idea what happened in those final ten minutes. It would be decades before I would learn about post-production tinkering, critical responses, or the secret that lay at the heart of WATCHER IN THE WOODS. Until then, I just had a shrug where the film’s climax should’ve been.

If you were to watch THE WATCHER IN THE WOODS now, you’d probably find it to be a fairly flimsy family film flirting with horror that doesn’t make a ton of sense. But back in 1980, Disney thought they had something when they adapted A Watcher in the Woods, the 1976 YA mystery novel by Florence Engel Randall. 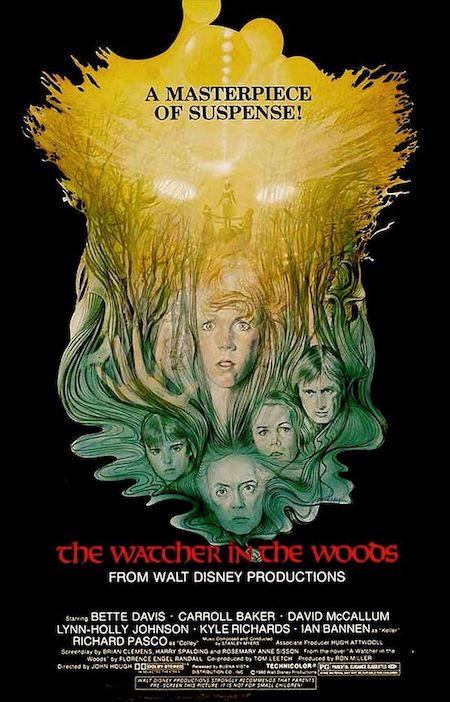 The Curtis family moves in to their new home in the English countryside, an old manor watched over by Mrs. Aylwood. Aylwood doesn’t like most people—in fact she usually turns away most prospective renters—but something about the eldest Curtis daughter, Jan, makes Aylwood reconsider and allow the Curtises to stay. Soon there are weird events and bizarre visions affecting Jan and her sister, Ellie, that all seem to be connected to the disappearance of Aylwood’s daughter, 30 years earlier. 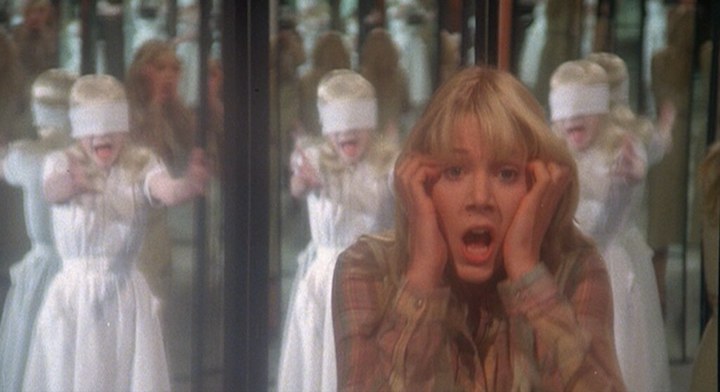 THE WATCHER IN THE WOODS stars Olympic ice skater-turned-actress Lynn-Holly Johnson (ICE CASTLES, FOR YOUR EYES ONLY) as Jan, Kyle Richards (HALLOWEEN, The Real Housewives of Beverly Hills, HALLOWEEN KILLS) as young sister Ellie, Bette Davis (WICKED STEPMOTHER, BURNT OFFERINGS) as Mrs. Aylwood, Carroll Baker (BABY DOLL, KINDERGARTEN COP) as the girls’ mother, and David McCallum (The Man From U.N.C.L.E. and NCIS) as their father. It’s a pretty impressive cast with various levels of popularity from different decades and genres. 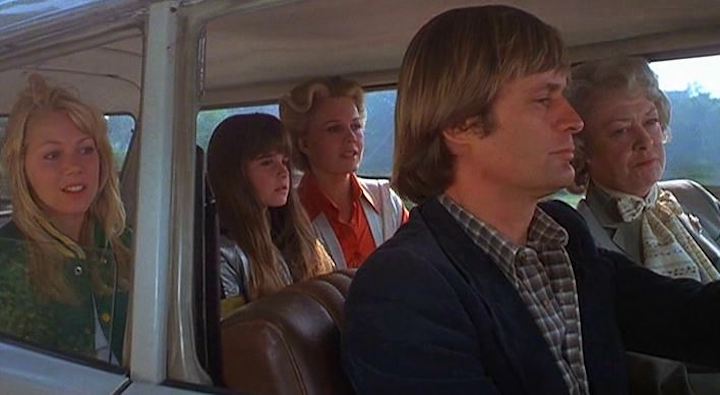 This winning cast was under the direction (mostly…we’ll get there) of John Hough, who is an incredible filmmaker: LEGEND OF HELL HOUSE, TWINS OF EVIL, DIRTY MARY CRAZY LARRY, Disney family sci-fi hits ESCAPE TO WITCH MOUNTAIN and RETURN FROM WITCH MOUNTAIN. His post-WATCHER IN THE WOODS filmography is less intriguing but still has some standout genre titles with THE INCUBUS, AMERICAN GOTHIC, and HOWLING IV: THE ORIGINAL NIGHTMARE. 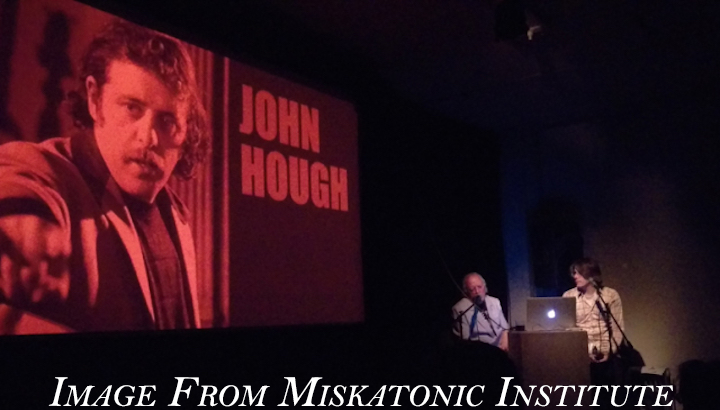 Jan and Ellie are close while their parents are often busy. The sisters find adventures in their new rural surroundings—including Jan seeing a blindfolded girl in a pane of glass, weird lights in the woods, Ellie being told by mysterious voices about what to name her new dog, and so on. It is all tied to the 30-years old disappearance of Karen Aylwood, who vanished one night while surrounded by three friends during a late night “séance” (please note: it is objectively not a séance, in any sense of the word). 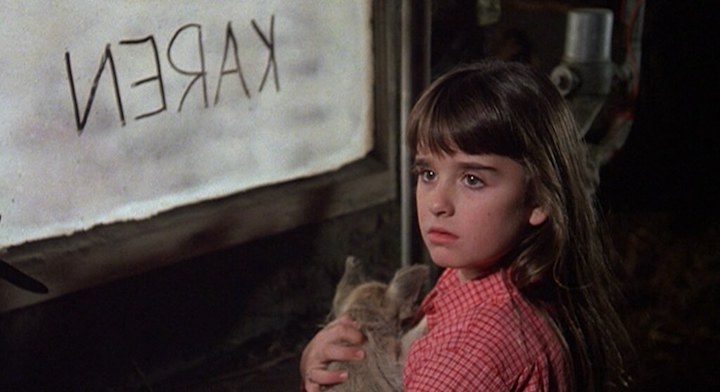 For anyone that wasn’t at the Ziegfeld for those 10 days in April 1980, WATCHER IN THE WOODS ended with Jan re-enacting the “séance” with the adult versions of Karen’s friends as a solar eclipse happens. Ellie shows up, speaking in an otherworldly cadence saying about how Karen switched places 30 years ago and has been suspended in another place. Possessed Ellie instructs the group to continue their ritual—which leads to a ball of light materializing and engulfing Jan into flames, only to reveal Karen standing amidst her old friends. Jan and Ellie are okay and Mrs. Aylwood enters to see her daughter after many decades. Roll credits. 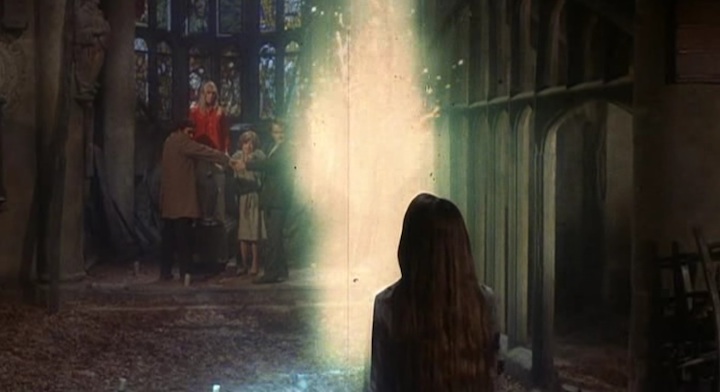 As a kid, you can squint and make up some rationale why Karen went away in WATCHER IN THE WOODS, but it all feels like a shrug. But it was made by adults and they know better, right? 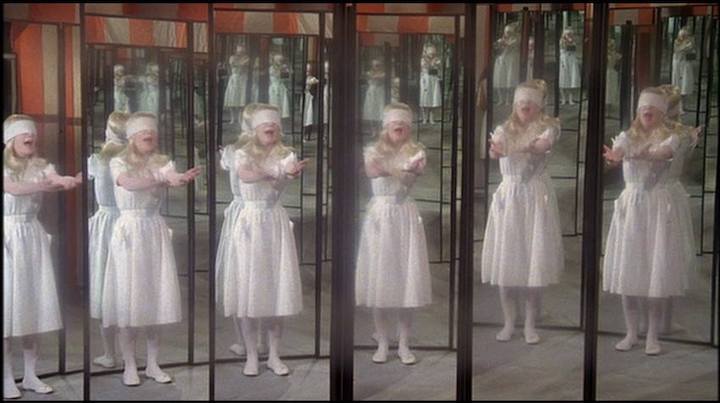 The original ending of THE WATCHER IN THE WOODS became a thing of infamy in cinematic circles, Disney fandom, and other niche groups. After all, there were ten days when it was the only version of the film, so there was an almost alternative dimension for critics and viewers who saw that copy of the movie. The true finale wasn’t an enchanted Ellie alongside a poorly animated Will o’ the Wisp. Hough’s original vision of The Watcher was, in fact, revealed during that secret ceremony. Not as some disembodied force of energy, but instead a Lovecraftian marriage of Guillermo Del Toro’s MIMIC and the Jabberwocky from 1985’s Alice In Wonderland TV movie. Here is original The Watcher, from Walt Disney Studios’ 1980 family film, THE WATCHER IN THE WOODS:

How goddamn awesome is that? It’s ridiculously horrifying and would literally be the stuff of nightmares for thousands of children had it made its way beyond those ten days at the Ziegfeld. The Watcher is an otherworldly creature who just happened to cross through our plane of existence right in the time and place where Karen stood, so that shunted Karen off into some suspended negative image realm while the Watcher skulked about in the woods for 30 years, as one does. Jan arrives and allows for a switch to happen so that the Watcher can go home and Karen can return—still the same young girl whereas time has moved on for everyone else. 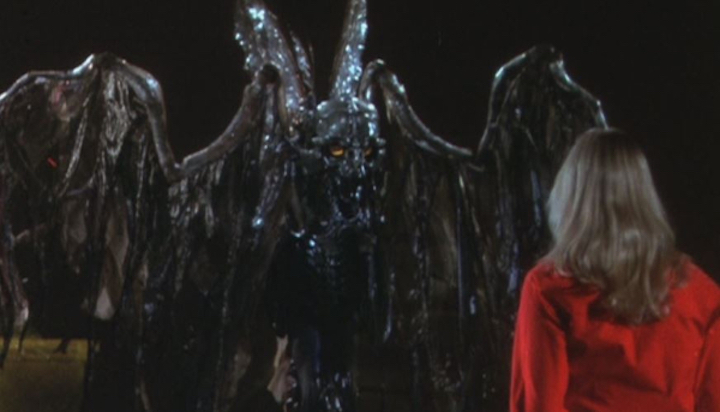 This is the original ending of WATCHER IN THE WOODS (preserved and presented in the Artisan DVD):

Even before its hastily aborted release, Hough always had an issue with the film because F/X couldn’t properly realize it due to an increasingly slashed budget and technological restrictions of the time. After WATCHER IN THE WOODS was pulled in April 1980, another director  (Vincent McEveety) was brought in to shoot the ending most people knew for decades and there were edits done to the rest of the movie try to salvage it a bit before its re-release in 1981. 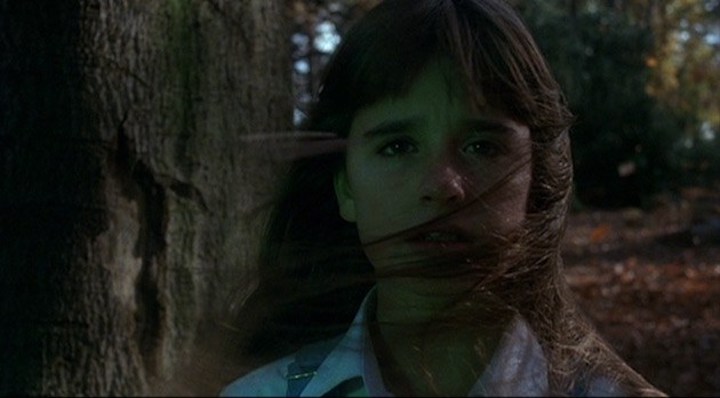 Artisan told Hough that all of the previous edits would be fixed back to his original vision for their DVD and, thanks to some devoted people, they would do a fairly good job of mocking up the journey to The Watcher’s homeworld. Disney was all for it…until they weren’t. Thus the fully restored version was never meant to be, but this polished alternative to the alternative ending was made and released, too:

None of this makes up for the fact that WATCHER IN THE WOODS barely makes sense even with these pretty incredible changes. The lack of coherence, of course, could be due to Disney’s edits. 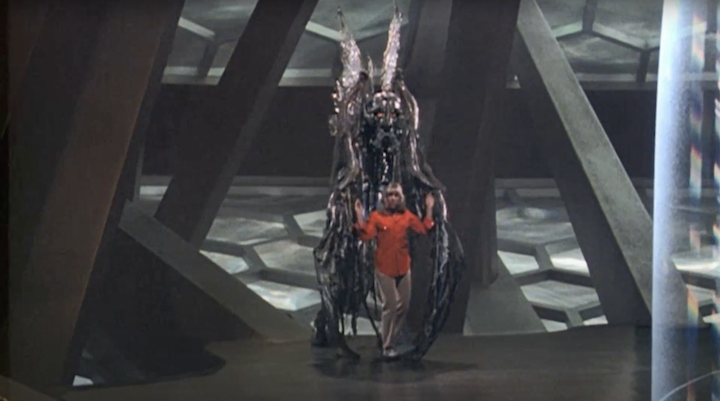 But it is always fascinating when voracious capitalists eschew some older venture that could make them profits. Lucas was happy to re-edit and create multiple versions of STAR WARS, but would also do what he could to wipe out The Star Wars Holiday Special. Disney has a bunch of these projects they’ve left to decay in the shadows—SONG OF THE SOUTH being the most infamous. When a company that merchandises and monetizes their properties every way they can actively chooses to not do so for something they own, that sets off alarms for nerds to seek it out. When WATCHER IN THE WOODS was remade in 2017 (directed by Melissa Joan Hart and starring Anjelica Huston), it was punted off to Disney subsidiary Lifetime Television—as opposed to one of their more prestigious channels. 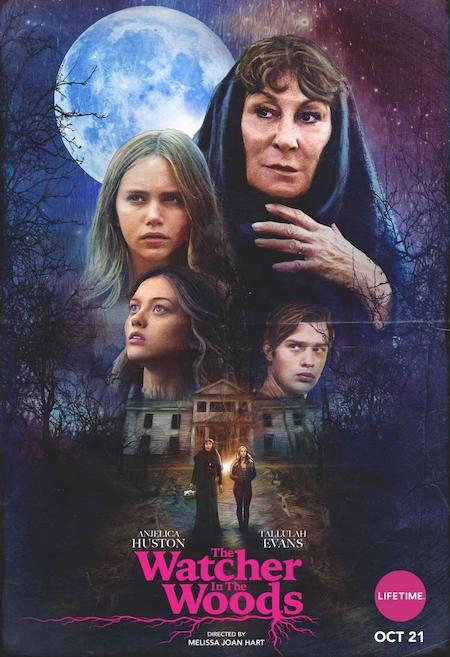 THE WATCHER IN THE WOODS isn’t a great film, even if viewers choose to be lenient as it’s a family film, made in the late ’70s/early ’80s, under Disney, with a troubled post-production. But it is a great entry level film for the types of kids who will, say, one day write for a website that traffics in bizarre genre films, and who will seek out nonsensical films like THE DRIFTING CLASSROOM, SINT, THE DEVIL’S RAIN, LIQUID SKY, HAUSU, and more. 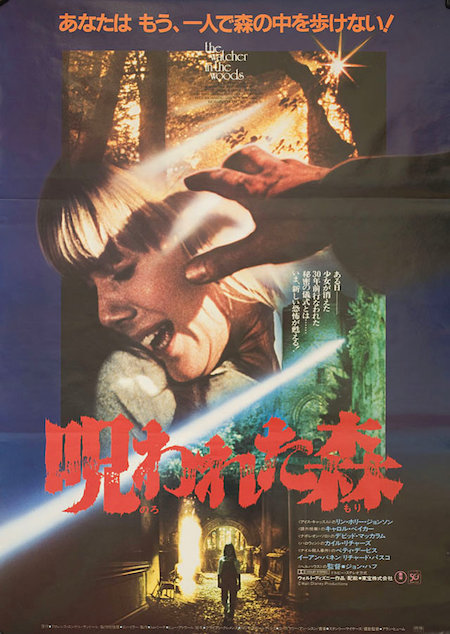 Randall’s book was released just a year prior to King’s The Shining and WATCHER IN THE WOODS came out in New York a full month before Kubrick’s adaptation of that story—which is filled with backwards writing, seemingly possessed tots, otherworldly creatures reaching out to the living, and secrets surrounding a potential location. Old friends who have to reunite to perform the same task they did as children 30 years earlier? Bizarre monsters defying description moving between worlds and causing unintended consequences for the humans that tamper in such realms? Hough’s film utilized elements that would become staples of the genre and indelible images in other titles for decades to come. 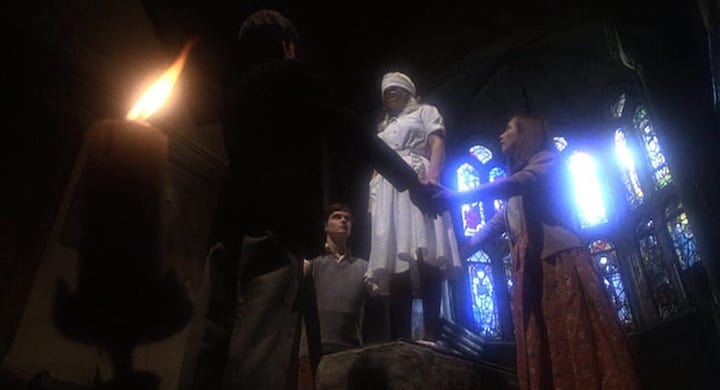 THE WATCHER IN THE WOODS is certainly flawed—but there is a Fisher-Price’s “My First Batshit Horror Movie” experience to it that plants the seeds for young viewers to find more and better versions without it being completely alien to them. 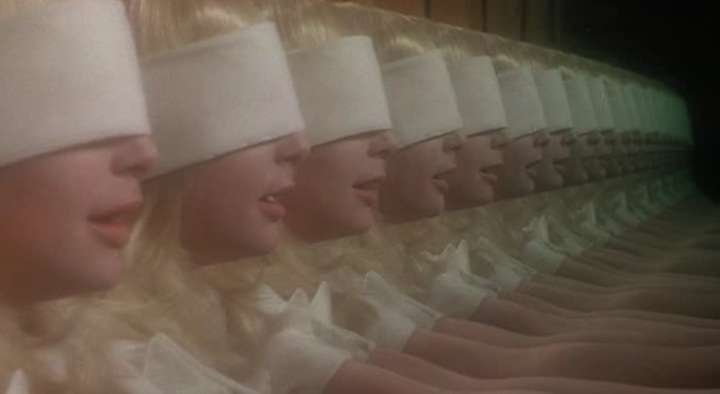