Home  ⁄  The Wire  ⁄  THE FIFTY GREATEST CHARACTERS FROM LARRY COHEN’S FILMS, PART ONE!

Today would have been the 83rd birthday of writer/producer/director/raconteur/all-around legend Larry Cohen. The world lost this greatest of all American independent filmmakers earlier this year, but he left behind a rich catalog of films and TV shows stretching back to the ’50s and the golden age of live television. I decided to celebrate his birthday this week by doing my personal rundown of the fifty greatest characters from his films. The only rule I gave myself was that the character had to be from a movie he wrote and directed—no cheating and including characters from films he only wrote (hence the lack of characters from the MANIAC COP series or BEST SELLER). I will be listing ten characters a day with the top ten wrapping it up on Friday. Obviously, this is a very subjective list, so sound off in the comments if you think I got it wrong or let me know on Twitter by clicking the link in my bio at the bottom of this page. Let’s honor Larry Cohen’s life and legacy by watching and talking about his movies. I think he would have gotten a kick out of the attention. 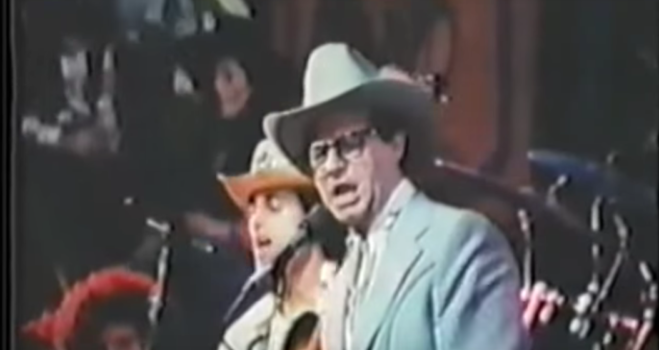 The 1981 made-for-TV movie SEE CHINA AND DIE was intended to be a pilot for a light mystery show revolving around Momma Sykes (Esther Rolle), a housekeeper to New York City’s wealthy elite who uses her years of reading mystery novels to solve the murder of the week. The show never happened, but the TV movie is breezy fun and allowed Cohen to give the great Paul Dooley possibly the most cartoonish role of his career as Ames Prescott, a Mickey Gilley-type singer of bad pop-country songs. The scene of Dooley as Prescott performing in an URBAN COWBOY-like country bar earns him a place on this list.

Movie: AS GOOD AS DEAD 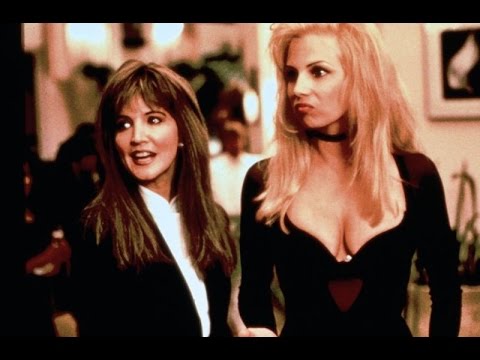 You can see how handcuffed Cohen was by the USA Network standards & practices (not to mention the miscasting of Crystal Bernard and Judge Reinhold that was forced on him for the leads) in 1995’s AS GOOD AS DEAD, but the film allowed him to give Traci Lords one of the better characters in her career. Glamorous, funny, charming, goofy, and sweet-natured, Nicole Grace is of course destined to be the first act death that creates the mistaken identity plot that drives the rest of the film. But Cohen writes such a vibrant character in the doomed Nicole and Lords plays her with such liveliness that it is no surprise when the rest of the film more or less fizzles out after her demise. 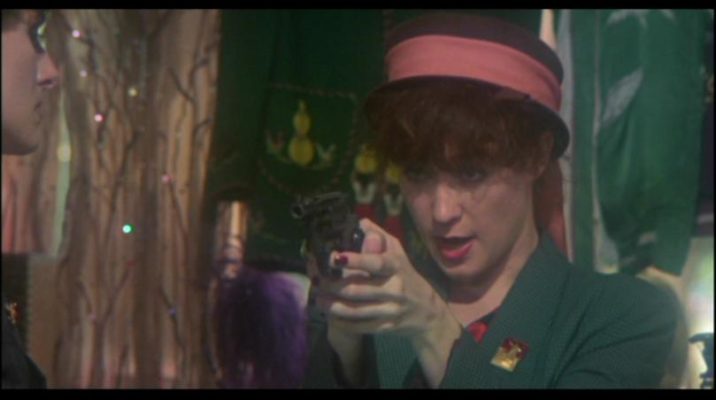 No one is ever going to confuse PERFECT STRANGERS for top-tier Cohen. Hell, it’s only a few notches above WICKED STEPMOTHER, if I’m being completely honest. But it does feature a couple of truly oddball characters in Cohen’s patented “New Yorker’s are just plain nuts” mold. Despite Cohen’s unfortunate misunderstanding of what constituted feminism in the early ’80s, the ultra militant Malda is given goofy life by Ann Magnuson, who plays her over-the-top role with a twinkle-in-the-eye devilishness that is the sort of spark the rest of the movie sorely needs.

While we’re on the subject of supporting characters in PERFECT STRANGERS, the unnamed private detective (German musician and LIQUID SKY co-star Otto von Wernherr) makes this list for being so bad at his job and being so goddamn strange. That’s it. That’s my only reason for including him, but if you watch the movie even once, it’s impossible to forget him. 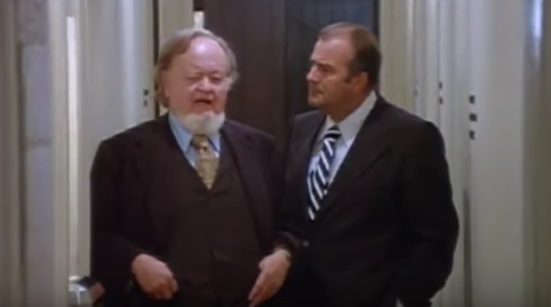 Speaking of one or two scene characters that make an impression because of how damn strange they are, the pharmaceutical executive (Robert Emhardt) from IT’S ALIVE shows up here. Representing an industry that Cohen attacks with gusto, the executive is made to look as weird and grotesque as possible as he uses a faux-Southern accent to soften the evil of his dialogue. Instantly memorable and disgusting as a villain even though he is not seen in the movie again after his one scene. 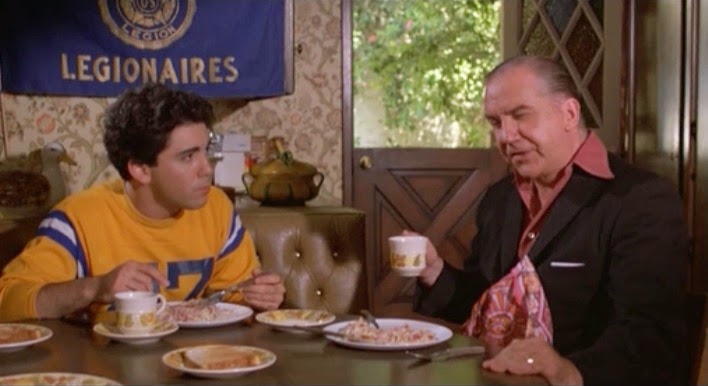 While not Cohen’s best example of a paranoid, right-wing military buffoon (that character will make an appearance later in the week), the caricature here is memorable for being played by Ed McMahon and the strange feeling that his ranting and raving about Communist infiltration (while going on a top secret mission to Eastern Europe to frolic with prostitutes) might not be acting on the part of Johnny Carson’s longtime sidekick.

All he does is supply some exposition and serve as a bit of a red herring for the identity of the ritualistic killer who has brought Quetzalcoatl to life, but the look of the professor (Larry Pine) with his sunglasses blacking out his eyes is so weirdly menacing, he stands out in a film full of memorable one scene characters.

Makes the list simply for going undercover as a mime and providing one of the most sublime and silly moments in the movie with the visual pun of not being able to scream in terror when the plumed serpent snatches a victim right in front of him.

There is no getting around the fact that, in today’s world, much of the comedy in FULL MOON HIGH is considered tasteless (or, if you choose to use a word that annoys me, “problematic”). From lisping gay caricatures to insult comic psychiatrists, there is a streak of stereotypical, sometimes mean, humor that runs throughout the film. None of that humor is meaner (or honestly funny) than what the character of poor, meek Miss Montgomery (Elizabeth Hartman) goes through as a teacher in a terrible school who is deathly afraid of her students (with good reason). If not for her eventual happy ending, you could make the argument that she is as mercilessly tortured as any woman in a Lars Von Trier film. And yes, it is a comedy. 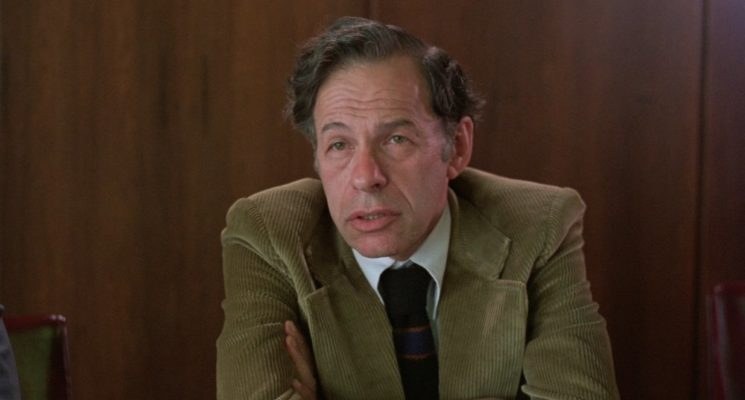 Like all the best of Cohen’s characters, a good half of what makes the unnamed Deputy Commissioner memorable is the casting. Veteran character actor Mike Kellin (perhaps best known as the camp owner in SLEEPAWAY CAMP) brings some much-needed, dryly comedic energy to the otherwise bleakly apocalyptic tone of Cohen’s masterpiece. From “The Irish have waited all year for this day, you are not going to ruin it for them!” to “Now what kind of an accusation is that to make about a dead officer?”, he makes a meal of every sarcastic line given to him and strolls away with every scene he’s in.

Be sure to check back tomorrow for characters 40-31!