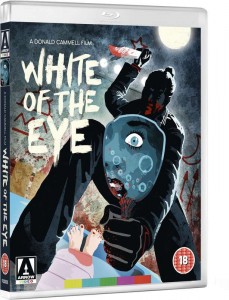 Donald Cammell’s four feature films stand out for several reasons, one of them being his work as the co-director of one of the top British films of all time, PERFORMANCE, along with trained cinematographer Nicolas Roeg. For Roeg it was the beginning of a championed career as a filmmaker, for Cammell it was the beginning of many difficulties to bring his visions to the screen.

Roeg had already been working in the camera department in film production for twenty years at the time of PERFORMANCE’s inception, while former painter Donald Cammell had two screenwriting credits to his name. One had seen the various trials of filmmaking from inside while the other was still fairly new to the common travails plaguing filmmakers. Incredibly, the pair created a vision that is unparalleled to this day, and while the reverberations of this effort continue to shine among cineastes, Roeg would go on to a bright list of directorial credits including WALKABOUT, DON’T LOOK NOW and THE MAN WHO FELL TO EARTH, and in the same period Cammell managed to eek out DEMON SEED, yet another of his films to undergo a knife that was not his.

For his third film, WHITE OF THE EYE, Cammell hired David Keith and Cathy Moriarty to enhance his vision of a suburban serial killer hidden behind the guise of a stacked, sexy stereo equipment technician. Demonstrating early on his echolocation technique of emitting a sound to learn where to put speakers, Keith’s Paul White is already offset from normalcy though maintaining a happy home with his wife Joan and their daughter Danielle. Very early though we’re already enticed with the idea that there is more to Paul than most folks, and his early dalliance with a woman in their community also hints at a different lifestyle than his wife and daughter know. 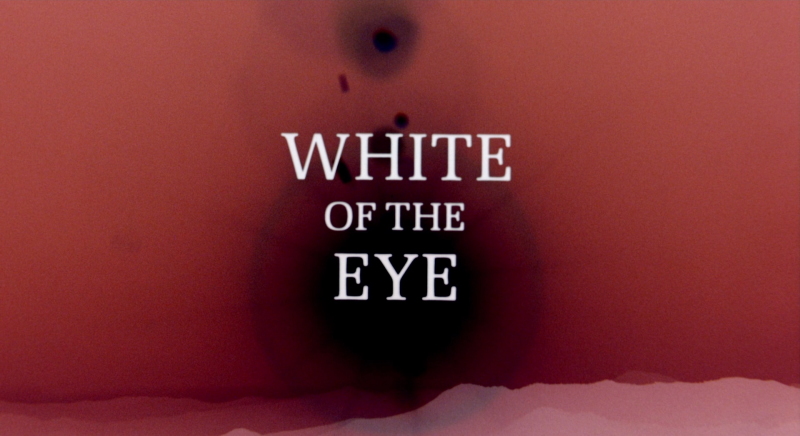 Keith struts around with a well-defined package in his tight jeans, so it stands to reason he’d be seeing other women though he truly does love his wife. This contributes to her own problems once she finds his truck parked down the dirt road from a woman in town. With an angry vengeance she slashes his tire, not realizing his real reason for being at that house. It doesn’t give much away to mention this as it’s alluded to throughout the film, though the way she learns of Paul’s other behaviors, a bit more violent than a mere sexual fling, and her reaction to this discovery, is what separates WHITE OF THE EYE from other films that cross into the realm of human predators.

Cammell opens the film with a signature tilt-up shot of the sun and lens reflection, creating an eye-like image, as a blackbird’s wings spread across the sky. The home of the first victim is a sterile, ultraclean modern environment, painted by the home invader’s violence, juxtaposed with the more familial warmth of Joan and Danielle White making cookies in their home. Showcasing his love for music, Paul White is introduced driving while bellowing an aria from the opera Pagliacci, the story of the tortured clown, foreshadowing an image of Paul’s transformation near the end of the film. 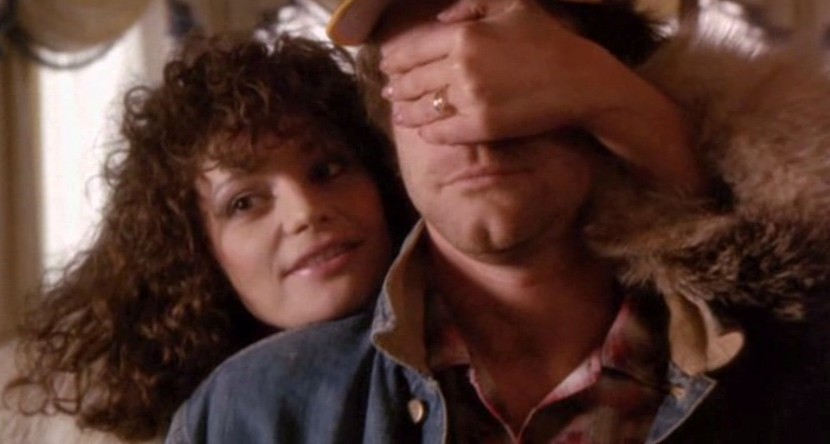 In an unusual scene, Joan asks her husband to show her his ‘trick,’ which he obliges by standing in the middle of their living room and uttering a tone, the camera circling him as he adjusts speaker placements according to what frequencies bounce back to him. He is an artist, like James Fox’s Chas. in PERFORMANCE, and the police investigating the earlier crime mention the crime scene is like a Picasso. And like many artists, Paul enjoys an audience, though in his case it’s the media reporting on the crimes he’s committed.

When Paul is introduced to Joan in a bleached-out flashback, he’s a complete and total stud, his crotch packed, with flying mulleted hair and sharp metal tooth jewelry around his neck—an animal. Joan’s attraction is well-understood. Meeting him through Joan’s ex Mike Desantos (Alan Rosenberg), the film plays these characters as a triangle, and all will figure in the explosive denouement.

The murder of Liza Manchester (Mimi Leiber) is such a stand-out that the new box art for the film highlights the bizarre actions. This particular murder is expounded upon by cinematographer Larry McConkey during his interview. Ms. Leiber is held upside down, head bonked on the floor, and wrapped up in a blanket and dunked under the water in a bathtub, a role for the bravest of actresses, as the killer holds a mirror up for her to see her own final moments.

A very unusual serial killer film, WHITE OF THE EYE is signature Cammell and stands out due to his directorial storytelling. A film created with his wife China, it’s stamped as a film worthy of reconsideration, one originally lost to poor distribution and difficulty in marketing an out-of-the-box tale.

Arrow has pulled every rabbit out of the hat for this combo Blu-ray/DVD Region 2 PAL release. A brand-new high-definition digital transfer from the original camera negative displays the film as it’s not been seen before (and this reviewer has seen a 35mm print of the film projected). Kevin McDonald and Chris Rodley’s feature-length documentary DONALD CAMMELL: THE ULTIMATE PERFORMANCE, featuring interviews with Nicolas Roeg, Mick Jagger, Kenneth Anger, and James Fox, is included, which is bonus enough, and Cammell’s short film THE ARGUMENT, shot by Vilmos Zsigmond and posthumously completed by Performance’s editor Frank Mazzola adds to the package. And interview with cinematographer Larry McConkey, rare deleted scenes, the original unbleached flashback scenes, and alternate credits sequence are among the desserts of this film feast.

Sam Umland, co-author with his wife Rebecca of the FAB Press publication “Donald Cammell: A Life on the Wild Side,” well-versed in film, literature, music, and art, offers an authoritative commentary, one that extends to the deleted scenes and THE ARGUMENT, and the disc’s booklet. A fantastic package thick with history, detail, and additional material, WHITE OF THE EYE is a grand presentation of a previously elusive film, and one that earns a place in any discerning cineaste’s film library.

Shade Rupe is the author of Dark Stars Rising and the producer and co-director of the recording of Teller’s (Penn & Teller) live spookshow Play Dead. His cover story interview with William Friedkin for Fangoria #329 is nominated for a 2013 Rondo Award.