This past weekend, I had the opportunity to check out the Alamo Drafthouse’s trailer compilation, TRAILER WAR, the way the previews featured were meant to be seen – in a half-packed theater populated by a combination of friends and alcoholically inebriated strangers. As you’d expect from a program curated by purveyors of psychotronic film as well-renowned as the Drafthouse, it’s a great way to spend a couple of hours, with the highly entertaining section of vintage previews flowing thematically from superheroes to science fiction to martial arts with ease. If the running time is the worst criticism that can be levied at the program (it runs nearly a full two hours), that’s the sign of a fine line-up – it’s like complaining about a restaurant because they’re desserts are just too big.

Synapse’s 42ND STREET FOREVER and Umbrella’s DRIVE-IN DELIRIUM series are the gold standard of trailer collections, but the likes of TRAILER WAR and Vagrant’s COLOR CORRECT MY COCK have been worthy adversaries, all picking up where the old guard of Something Weird’s DUSK TIL DAWN TRASHORAMA SHOW series or Rhino’s SLEAZEMANIA comps left off. Something Weird and Sinister Cinema even have trailer comps devoted to specific genres, like Sinister’s SIX-GUN CLASSICS series, and similar releases with only Frankenstein, Hammer or Film Noir films have also been released. All of these comps have one thing in common – they distill the essence of a feature film into its’ most entertaining three-minute chunk, ideally backed by outrageously entertaining ballyhoo from a voice actor so well-cast that they may as well be playing God. 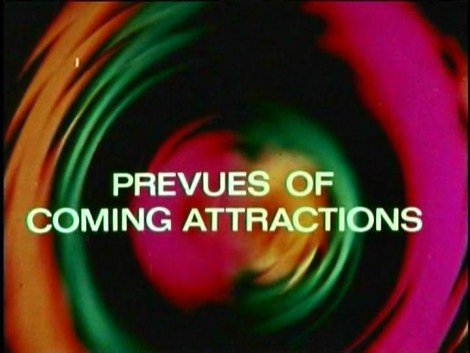 The trailer compilation has quickly become a favorite of cult movie fans, and on the surface, it’s not hard to see why. What’s often forgotten, however, is the fact that these are advertisements, and they serve their original purpose just as well now, if not even better, than they did when they were first sent across the country to be viewed before a feature by drunken hooligans rowdy for as much sex, blood and action that their entertainment had to offer.

There’s nothing particularly unique about the format of TRAILER WARS – if anything, it’s more minimalist than the likes of 42ND STREET and COLOR CORRECT as it includes nothing but trailers. There’s no theater promotions, no random cartoons, no regional commercials – nothing but one great come-on after another. While some of the trailers have been seen on other collections, the “duplicates” are perfectly welcome – seriously, you can put the trailer for STUNT ROCK in front of an audience that’s seen it a thousand times and it’ll still get a great reaction.

Taken as 120 minutes of, essentially, advertising, it’s truly impressive how trailers have stood the test of time. While vintage commercials are occasionally entertaining, it’s rare that watching them creates the instinct to want to go out and buy the product. There are a few exceptions, mostly toys, but that instinct comes from nostalgia rather than being “sold” the product from a cinematic come-on.

For cult movie fans, the trailers work for their intended purpose – they introduce the audience to new movies that they can then look forward to seeing. As I watched TRAILER WARS, I tried to make mental notes as frequently as possible, attempting to recall the likes of EUNUCH OF THE WESTERN PALACE, FORCE FOUR and THUNDER COPS, as the trailers created promised so much action and weirdness that I felt as though I HAD TO FIND THEM IMMEDIATELY. It didn’t matter that I knew that there was no way these movies could live up to the brief sample sold with a booming voice-over and inexplicable title – a 90% disappointment rate is pretty much standard in seeking out movies like this. It didn’t even matter that, as it turned out, I’d seen FORCE FOUR under the title BLACK FORCE years ago and didn’t remember because it’s not a particularly memorable movie. For that two hours, I was engulfed in material that presented me with worlds of psychotronic filmdom that I’d not yet explored, and if none of movies of the bunch I end up remembering, finding, and watching (a tough call in itself) turns out to be good, it’s still worth the two hours that made the movies look amazing. 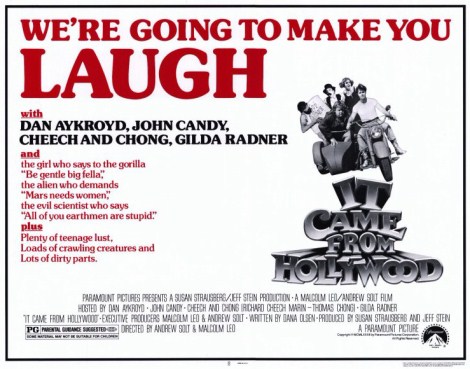 Through the eyes of someone not already infected by the psychotronic film bug, the “all genre” trailer collection format of DRAFTHOUSE, 42nd STREET and COLOR CORRECT can be equally entertaining, but it still serves as an advertisement – if not for the movies themselves, then for the whole carnival tent-sized genre of eccentric film. By representing the best parts of exploitation films with such exuberant energy, even someone who’s never seen EVIL DEAD 2 can be entertained, as their brain becomes inundated with deranged imagery presented in such a quick, easy-to-comprehend form that doesn’t require sense to be made of the plot.

It’s the perfect format to introduce someone to the wild world of movies to which those of us who read this site have already become addicted. With trailers rarely lasting longer than three minutes and the genres changing after every ten minutes or so, it means that even if one trailer or genre bombs (I can only take about three martial arts trailers before I start to zone out, myself) a complete shift in tone should come alone pretty quickly. Even if an unsuspecting neophyte doesn’t remember the name of a single film (though in the case of TRAILER WAR, the title of ELECTRIC CHAIR, repeated about 27 times during the course of two minutes, should stick in their head forever) they’re remember how much action, sex, blood, humor and general excitement is in this type of film – like the most well-crafted advertising, that it’s falsely representing the product is irrelevant.

With the advertising power of trailers evolving over time rather than simply getting relegated to curious ephemera status, it’s no surprise that making faux vintage trailers has become so prevalent – exploitation trailers have a load of different genres to reference and each one has distinct patterns and structures. The likes of PREMAKES have even done a great job at doing vintage trailers that represent modern films, and the publicists of THE CANYONS have taken the next logical step by issuing faux-vintage trailers advertising, er, a Bret Easton Ellis/Paul Schrader/Lindsay Lohan/Gus Van Sant film, accentuating the WTF nature of the film in order to get people’s attention.

Hopefully, the next step will be a larger proliferation of creators making “vintage” trailers for older exploitation films that either never got trailers in the first place or those whose trailers are either lost to time or just not very good. I’d love to see a well-made trailer that breathlessly exclaimed the selling points of the likes of VULTURES or POSITIVE ID. It would be a great way to expose new audiences to a film that hasn’t gotten proper representation, partially due to the fact that few outside the most dedicated fan bases know some films exist – in other words, do exactly what a trailer is made to do, albeit decades later.