Caution: Several one-syllable words of the four-letter variety ahead.

WINNEBAGO MAN is a documentary that follows the efforts of its very likable director and the Boswell of the piece, Ben Steinbauer, in his unusual quest to locate his own personal Great White Whale: Jack Rebney, the corporate spokesman made legendary in the intervening two decades by his colorful flameout on a Winnebago shoot in Iowa in the late 1980s. It’s not really a spoiler to announce that Ben does eventually find Jack, and what unfolds is way more dramatically satisfying than the by-the-numbers scripted films that are so often dumped onto multiplex screens. Jack is an amazing American character – sad and sharp and expertly-spoken and hilarious – and his story is plenty funny, but the method with which his story is told here is uncommon in its sensitivity and its ability to locate the humanity in unusual individuals. 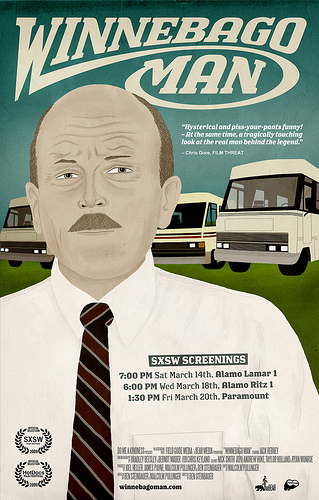 This is the first real post-YouTube movie, in the way that it specifically addresses the 21st-century viral-video phenomenon that positively exploded when YouTube arrived in 2005. VHS tapes of “The Winnebago Man” were circulated by discriminating schadenfreude-craving collectors even before there was an internet, but if you mention Jack Rebney to most people, they’re well familiar with him through the “Winnebago Man” videos. Take a moment if you need now to go search him out on YouTube. (Amazingly to me, I’d never seen this one, though I’ve seen that grape-stepping lady at the vineyard fall down approximately two hundred times.)

What is so impressive about what Ben Steinbauer and his crew have done here is that, of course, they allow us to have a couple laughs at Jack Rebney’s expense, but they go way beyond that initial response; delving deeply into the effects that this kind of uninvited celebrity can have on a person’s life, while at the same time highlighting what makes this particular person so interesting. Jack Rebney is certainly absurd in most respects, but he’s also a sensitive human being with feelings and opinions and an absolutely fascinating and unique elocution. (Picture Hal Holbrook with the mouth of Eddie Murphy circa RAW.) The camera loves him, and so did every audience with whom I’ve seen this wonderful movie. Jack absolutely deserves this expertly-crafted documentary, even if he never asked for it.

I beseech you to see this movie at the earliest possible opportunity, but not for my sake; do it for yourself. You will love it, and that’s a rarely-offered guarantee.

Once you see WINNEBAGO MAN, take to Twitter to let me know what the fuck you think:  @jonzilla___ 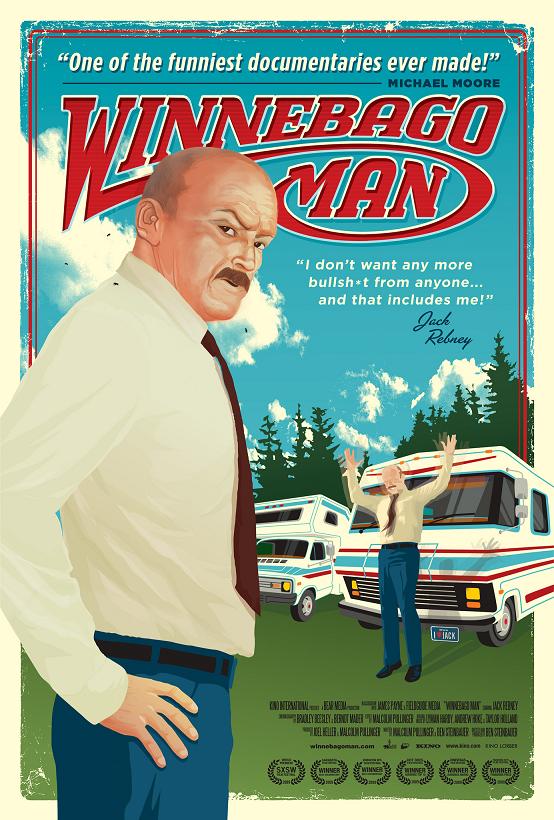