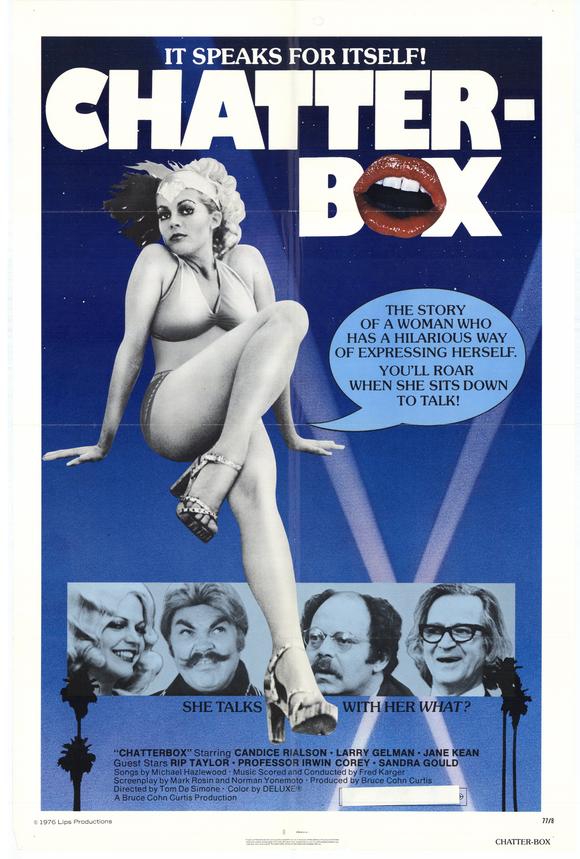 Ever have someone tell you the plot of a movie, and it’s so bizarre that you don’t believe it’s real? That’s what we’re here to celebrate with Yes, It’s a Real Movie! For our debut installment, we’re going to look at a most unusual feature from 1977 entitled CHATTERBOX, which is about a woman with a talking vagina. Yes, it’s a real movie! 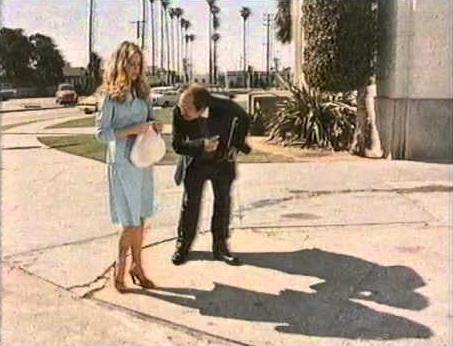 In this softcore comedy, Candice Rialson plays a hairdresser named Penelope. One night, after a somewhat disappointing round of boot-knocking, her vagina abruptly develops a voice, which it uses to criticize her lover, Ted. This critique continues over subsequent love-making sessions, until Ted gets fed up, telling Penelope, “I don’t have to stay here and be insulted by that bitch!” He promptly ends the relationship. Penelope is so distracted by her verbose va-jay-jay that she gets fired from her job at a hair salon run by Mr. Jo (Rip Taylor). She confides her problem to her psychiatrist, Dr. Pearl, who gives her a sound piece of mental health advice: enter show business! Establishing himself as her manager, Dr. Pearl promptly books Penelope and “Virginia” (as her vagina comes to be known) on a TV show hosted by comedian Professor Irwin Corey.

Virginia impresses the audience with a rousing rendition of “Wang Dang Doodle.” (CHATTERBOX is nothing if not the cinematic equivalent of a 12-year-old boy’s psyche.) This leads to another TV appearance, this time on “The Mating Game,” where Penelope wins a date with a guy named – you guessed it! – Dick. The date leads back to Dick’s home, where he has Penelope dress like a princess, while he enters the bedroom dressed in an ass-less suit of armor. They make love, but Virginia is not impressed. (“No offense, Dick, but this is like making it with a Buick!”) Dick turns out to be appropriately named in more ways than one; he dumps Penelope immediately after their tryst. Even worse, he dumps her via fortune cookie. 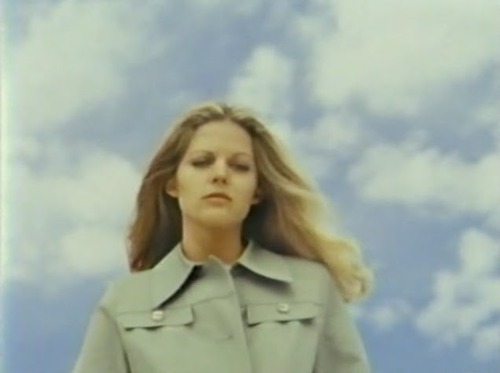 Her love life may be in tatters, but Penelope’s professional life is smooth sailing. She and Virginia are, by now, world famous, and they are given the honor of receiving a star on the Hollywood Walk of Fame. As many celebrities have done before her, Penelope puts her feet in wet cement, but then she hikes up her dress and bends down so that Virginia can also be immortalized. Next up is her debut in a big Hollywood movie – a musical in which Virginia sings a song about “waking up to my cock-a-doodle-doo” while guys dressed in feathers dance around.

It’s all a little too much for Penelope. She flees the studio, much to Dr. Pearl’s chagrin. The final scene of CHATTERBOX finds her contemplating suicide on the edge of a cliff, only to be reunited with Ted, who has inexplicably developed a talking/singing penis. They and their genitals run off together, presumably to live – and screw – happily ever after. 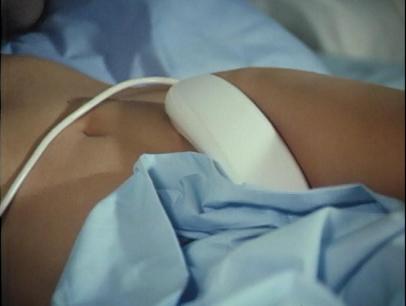 CHATTERBOX is intent on being naughty-with-a-capital-N at all times. It is filled with ribald jokes, such as the scene in which Virginia asks a waitress if the restaurant will “serve a box lunch.” (Think about it.) At another point, Virginia laments that she cannot be on her favorite TV show, “Leave It to Beaver.” For all the sleaziness and salaciousness of the premise, it’s hard to be offended by the movie. The tone is so light and comical that it plays as silly more than anything. It’s almost impressive how many vaginal and penile references CHATTERBOX manages to serve up. This is not to say it’s an especially good film. The humor is obviously one-note and, the scene where Virginia sings the National Anthem aside, it never fully lives up to the potential of its premise. Penelope is cast as a victim in all of this; having her be empowered by her vocal vagina would have given the flick a nifty feminist twist.

Cinema has delved into the idea of unusual genitalia a couple of times over the decades. In 1988’s ME AND HIM, Griffin Dunne develops a talking penis, and 2007’s TEETH is about a teenage girl afflicted with vagina dentata (a vagina that requires a dentist). Such films push boundaries by reveling in the very thing we keep most private: our privates. But whereas TEETH used its premise to comment on how men should be punished for attempts to exploit women, CHATTERBOX is merely a lark, intended to provoke titters, and little else. The visual aesthetic could politely be described as “cheap.” With flimsy sets and sloppy sound editing that makes it all-too-apparent that Virginia’s “voice” has been dubbed in after the fact, CHATTERBOX appears to have been made with an eye toward the intended audience of horny guys who like to watch 16mm films in their basements. Only the cinematography seems to have been thought out. This is likely due to the fact that the DP is Tak Fujimoto, who went on to shoot such classics as PRETTY IN PINK and FERRIS BUELLER’S DAY OFF for John Hughes, and SOMETHING WILD and THE SILENCE OF THE LAMBS for Jonathan Demme.

CHATTERBOX was directed by Tom DeSimone, who also directed REFORM SCHOOL GIRLS and was a noted maker of gay porn under the pseudonym Lancer Brooks. It runs a brief 73 minutes, and is available on DVD from Shout! Factory as part of their “4 Cult Movie Marathon Vol. 2” DVD set. The film is presented in an “open matte” format, meaning that you can frequently see the boom microphone hovering above the heads of the actors. (At one point, Rip Taylor bonks his head on it.) Anyone seeking to watch a movie about a talking vagina probably won’t be picky enough to mind. Besides, it’s totally appropriate to have a giant phallic object intruding on the frame of this vagina-obsessed film.