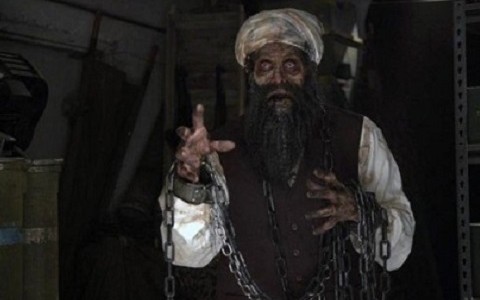 Welcome to the second installment of “Yes, It’s a Real Movie!” where preposterously-premised movies are our game. And, boy, do we have a doozy for you this time! OSOMBIE released in 2012, was made by a Utah-based production company, and it’s difficult to say what’s more egregious: the sheer awfulness of the execution or the utter offensiveness of the plot. Either way, this is a shameful and absurd bit of political jingoism masquerading as a horror flick. Is it surprising that someone would come up with this concept? No, but it is surprising that anyone would think it deserved to have time and money funneled into it.

OSOMBIE rests on the idea that terrorist leader Osama bin Laden was not, in fact, buried at sea after being killed by a Navy SEAL team. Instead, he survived in undead form and went on to create an army of zombies. (OSOMBIE = Osama + zombie, get it?) Our heroine is a young woman named Dusty (Eve Mauro), a yoga instructor whose brother Derek made the trek to Afghanistan to prove his theory that Osama was now something straight out of a George Romero flick. He’s gone missing, though, so Dusty decides to track him down. How a yoga instructor from Colorado is so easily able to get into the darkest reaches of Afghanistan is never explained.

Soon after arriving, Dusty encounters a team of soldiers tracking down the undead terrorist and his minions. They explain that a biological agent used to drive the Taliban out of their caves was responsible for their ultimate reanimation. Or at least I think that’s what the rambling, nonsensical exposition was trying to say. It really doesn’t matter; this whole idea sucks. Anyway, the soldiers need to contain the problem before it spreads. Dusty offers a revelation of her own: Derek was a firefighter who called in sick on 9/11, then watched in horror as his entire troop perished, hence his desire to become a zombie slayer. To say that this manipulative plot device is disrespectful to the real firefighters who died on that terrible day is an understatement.

Some scenes are predictable for those who have ever seen a zombie picture. For instance, one solder is bitten and sacrifices himself to save the rest of the group. Other moments are more unexpected, such as the one in which the soldiers discuss whether to look for zombie poop to find Osama’s location. (That’s right, folks. Zombie poop.) To make an unnecessarily long story mercifully short, Dusty and the soldiers locate Derek, and they eventually stumble across the undead Taliban camp, where all hell breaks loose. The soldiers sneak in to find a zombified Osama chained to a table and surrounded by Al Qaeda members. Other zombies bum rush the room, biting everyone in sight. Our heroes escape, but Derek runs back in to make sure Osama is dead. (ZERO DARK THIRTY this movie is not.) Once inside, Derek stands alone, surveying the scene. He suddenly sniffs and says, “Who crapped their pants?” Turning around, he discovers Osama is right behind him, apparently with a diaper full of doo-doo. Derek blows him up with a rocket launcher. An army plane then arrives outside to neutralize the zone. Derek stumbles out of the cave at the last second. The end.

Everyone involved in the making of OSOMBIE should be lined up so that Katherine Bigalow can slap each of them in the face as hard as possible. Poor acting, insipid dialogue, and an offensive streak of racism are in constant play here. Given that Osama bin Laden masterminded the deaths of thousands of innocent Americans, there’s nothing entertaining or appropriate about 1.) turning him into a zombie; 2.) making jokes about him crapping his pants; or 3.) using him as part of any sort of frivolous entertainment.

OSOMBIE was executive produced by a man named Rev. Thomas Marquis, and it was filmed entirely in Utah. (I can’t imagine Utah’s tourism commission is too happy with the suggestion that their state resembles Afghanistan.) The end credits feature a web address where you can buy your very own OSOMBIE-inspired shooting targets, and a weapons website called WeaponBlender.com is prominently featured as a production entity. All these things tell you pretty much everything you need to know about the film. It loves guns, hates Middle Eastern people whether they’re terrorists or not, and has an uncomfortable jingoistic tone that doesn’t honor America so much as celebrate a radical “kill ’em all and let God sort ’em out” mentality. Scene after scene in OSOMBIE offers the sight of zombies in Islamic garb being shot, stabbed, or impaled in the head. There is a very uncomfortable xenophobic feel to it. Yes, terrorists are bad, yet one can’t escape the feeling that the filmmakers were tapping into a more generalized fear of Islamic people of all stripes. In other words, if you think all Islamic people are terrorists – or potential terrorists – this movie is designed to get your rocks off.

Ridiculous though the premise may be, OSOMBIE represents poor filmmaking, plain and simple. It offers no fun whatsoever, and sitting through its repetitive violence and weak dialogue is tedious.