Home  ⁄  News  ⁄  CHECKING INTO THE ‘HAUNTED HOUSE ON SORORITY ROW’ 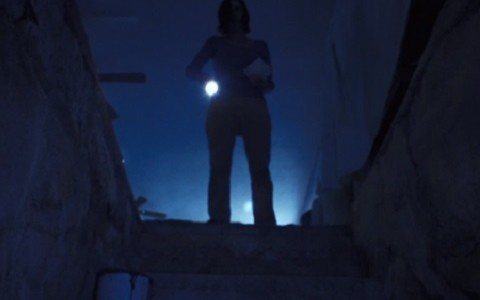 Henrique Couto’s BABYSITTER MASSACRE was one of the best independent horror films of 2013. In that film, Couto stripped the ‘80s slasher template to the bone and gave it a legitimate updating, even managing to squeeze in some decent characters the audience could give a damn about—a rare thing in most modern horror films, regardless of their budget. Alternative Cinema released the film on DVD and it is now available through Amazon and other online outlets, but aside from some acclaim on various horror blogs, BABYSITTER MASSACRE remains an underrated gem, and those who stumbled across it in 2013 were bound to be curious what Couto would do to follow it up.

On February 21st 2014, that question was answered at the world premiere of Couto’s new horror film, HAUNTED HOUSE ON SORORITY ROW, held at the Englewood Cinema in Englewood, Ohio. A mostly-packed house of cast, crew, friends, family and fans had the chance to check it out in advance of the film’s DVD release in July (again through Alternative Cinema). Fortunately, it does not disappoint, although it does take a completely different approach to the genre than BABYSITTER MASSACRE: as the title would suggest, HAUNTED HOUSE ON SORORITY ROW is a supernatural psychological horror film rather than a straightforward slasher.

Alex (Joni Durian) is looking to start a new sorority at her college where girls can go who don’t want to deal with on-campus sorority life. She finds a great bargain in a big remote house outside of town, but there’s naturally a catch: according to legend, the place is haunted. The story goes that the house was a brothel when it was first built, and during a particularly brutal winter all the women who lived there froze to death. Alex dismisses any idea of haunting as ridiculous and buys the house anyway.

Soon after, her new sorority sisters move in: quiet Sherrie (Erin R. Ryan), dedicated cosplay enthusiast Kathryn (Brandi Baird), and heavily tattooed party girl Melissa (Haley Madison). Melissa brings along help, asshole fratboy Jim (Eric Widing) and his much less abrasive friend Dave (Mike Hilinski), who has an obvious crush on Alex. The day starts off promisingly (except for Jim’s constant taunting and complaining), but the girls have barely moved the last box in the door before weird stuff starts happening: all the food brought into the house goes immediately bad, cell phones and wi-fi don’t work inside the house but do outside, torches rush past open windows. As the sun goes down, each person in the house is faced with the thing from their lives that they most fear. As their darkest secrets come back to haunt them, will Alex and her friends survive the night? Or are they doomed to the same mysterious fate that befell the women trapped in the house all those long winters ago?

As with BABYSITTER MASSACRE, Couto (and his screenwriter John Oak Dalton) excels in creating characters that the audience can actually care about. Particularly impressive is the film’s emphasis on well-drawn female characters, an important factor in the storyline that becomes even more central to the action when their secrets are revealed. All of the female cast members are very good, and although the film deals with some very dark subjects, there are well-placed jokes and some quirky ideas (one girl’s dark secret appears to be some guilt over not taking care of her dog well enough when she was young, although it is still alive and lives with her parents) give the film just enough of a sense of humor to keep the proceedings from becoming too dour.

From a visual standpoint, Couto uses the supernatural elements of the story to play around more with the look of HAUNTED HOUSE ON SORORITY ROW in contrast to the straightforward but solid look of BABYSITTER MASSACRE. Colored lights, Dutch angles, thick fog and strategic candlelight factor in much of HOUSE’s most memorable imagery. Additionally, there are many more makeup effects to create the ghosts haunting the house, ranging from simple and creepy to somewhat goofy. Given the film’s extremely low budget, however, that’s to be expected, and HAUNTED HOUSE ON SORORITY ROW effectively creates and maintains a creepy atmosphere better than many films with exponentially bigger budgets.

There is little doubt that come the end of 2014, HAUNTED HOUSE ON SORORITY ROW will be making horror fans’ lists. HOUSE is an excellent follow-up* to BABYSITTER MASSACRE and confirms that Couto and his ensemble of friends in front of and behind the camera are talents worth watching in the world of independent horror cinema. To see if the film will be hitting the big screen again before its DVD release, follow HAUNTED HOUSE ON SORORITY ROW on Facebook here.

And check out the trailer here:

*Technically, HAUNTED HOUSE ON SORORITY ROW is not the follow-up to BABYSITTER MASSACRE. After completing MASSACRE, Couto shot a family-friendly Christmas comedy, A BULLDOG FOR CHRISTMAS, which was released in late 2013. Now that House is complete, Couto is preparing to begin production on his next film, AWKWARD THANKSGIVING, a holiday comedy funded entirely by a highly successful Kickstarter campaign.