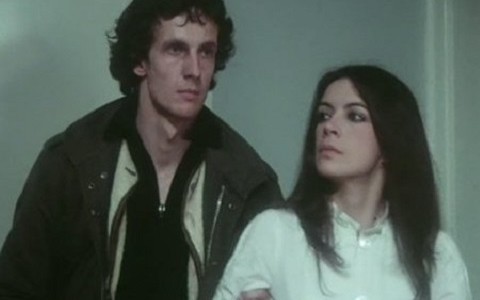 The history of exploitation cinema is loaded with titles that offer more “sizzle” than “steak” — hell, that’s part of the charm — but every now and again you come across something that, as the famous tagline for PIECES states, is “exactly what you think it is!” Case in point: the 1976 international tax shelter production NAKED MASSACRE, a bleak, remorseless, and very nearly conscience-free slab of festering celluloid sleaze helmed by French Canadian director Denis Heroux that combines the “psycho vet coming home from ‘Nam” meme so popular at the time with a no-frills recounting of Richard Speck’s notorious Chicago kill-spree, adds a dash of political commentary by way of the then-contemporary violence raging in Northern Island, and ends up being both remarkably akin to, and quite a bit different from, much similar fare that was being projected onto drive-in and grindhouse screens at roughly the same time.

Sit back for a few and I’ll do my best to explain exactly what the hell I’m talking about here.

We’ll take a quick look at the background here before delving into the admirably scant plot details: NAKED MASSACRE (also released under the far-less-lurid but still kinda cool title BORN FOR HELL, and originally known in German as DIE HINRICHTUNG) was financed primarily by Canadian investors, who sought to supplement their budget by bringing in foreign cash. It seemed a can’t lose proposition, and it was: many north-of-the-border silver screen “investment opportunities” yielded untaxed returns of 300% or more, so convincing deep pocket “silent partners” from France, Israel, the UK, and Germany (West Germany, to be specific, since this was well before Mr. Gorbachev tore down that wall) to hop onboard this money train wasn’t too hard a sell at all.

The thing is, they didn’t remain very silent for long, and the mish-mash that ensued is the kind of thing that can only happen when too many chefs start sticking their fingers in the broth. To wit: a primarily Canadian crew found itself setting up shop in Northern Ireland to film a movie featuring predominantly German and French talent in front of the camera. Nobody in their right mind sets out on a path that convoluted — but, like the bumper sticker says, “Shit Happens.”

Not to worry, though, friends — even though cash from all over the world was being flung in Heroux’s general direction, this still looks, feels, and plays out like a slice of gutter-level guerrilla cinema that nobody spent a dime on. We wouldn’t want it any other way, now, would we?

As for that, as I believe I put it, “admirably scant plot”: shell-shocked, traumatized-to-the-hilt army veteran Cain Adamson (played with a kind of low-level, slow-burn zeal by Mathieu Carriere, a French actor then based out of West Germany) is on his way home from “the shit” by way of Belfast — don’t ask me why you’d give a guy whose sanity is hanging by a thread a lengthy stopover in another fucking war zone — whereupon his first-hand view of “The Troubles” sends barely-subsumed memories of freshly-committed atrocities on his own part rushing back to the forefront of his tormented psyche. He then proceeds to do what, hell, anyone would do in his shoes (right?) would — namely head over to a nurse’s dormitory, force all eight lovely and lithe young beauties there to strip off their clothes, and then kill ’em all one by one.

Heroux, to his credit, doesn’t shy away from the implications inherent in any combination of sex and violence this combustible, and instead plays ’em up for all they’re worth. I don’t want to give away too many specifics, suffice to say that this film’s admixture of ultra-low production values, understated, naturalistic acting, and bare-bones sets combine to give the proceedings a deeply claustrophobic and stifling atmosphere that at times positively drips with both tension and flat-out malicious intent. Heroux is playing for keeps and Carriere, in particular, seems happy to leave plenty of open, festering scars on the audience. Abandon hope all ye who enter here.

The actresses tasked with playing the various unfortunate victims all acquit themselves fairly nicely, and while most were faces I didn’t recognize, a few will be fairly well-known to cult film buffs, namely: Debra (here using the curiously-spelled nickname Debby) Berger, who started her career in Otto Preminger’s notorious ROSEBUD fiasco and ended up being a Cannon Films stalwart; Christine Boisson, a veteran of both the EMMANUELLE franchise and Antonioni’s IDENTIFICATION OF A WOMAN; and Eva Mattes, who was in at least three different Fassbinder productions that come to mind. Not a bad line-up all in all, I’d say, for a “sleaze picture.”

And yeah, this definitely is a “sleaze picture.” Heroux had nearly a million bucks to play with and an over-qualified cast, but he chose to go for authenticity here, and the finished product is all the stronger for it. Plenty of scenes are downright uncomfortable (synonymous around these parts with “good”) to sit through, and his pomp-and-circumstance-free directorial style results in a yet another entry into the canon of films like COMBAT SHOCK, DEATHDREAM, MY FRIENDS NEED KILLING and, dare I even say it, FORCED ENTRY that prove that when it came to laying bare the psychic landscape of the unstable, PTSD-addled veteran, the independent exploitation auteurs did it better (and, in many cases, earlier) than more-celebrated mainstream Hollywood fare like THE DEER HUNTER or BORN ON THE FOURTH OF JULY could ever possibly hope to.

There are a million and one movies that could call themselves NAKED MASSACRE if they wanted to — girls taking off their clothes and getting killed is about as far from “unique” subject matter as one could imagine — but only one had the balls to actually do it. And while this movie has lapsed into the public domain and is consequently available in numerous DVD bargain-priced boxed sets (Mill Creek’s Chilling Classics comes immediately to mind), it’s also been slapped up on YouTube for your — ahem! — enjoyment, so here’s a link to Heroux’s laregely-unacknowledged masterpiece in all its — again with the ahem! — “glory.” You all go play nice, now.