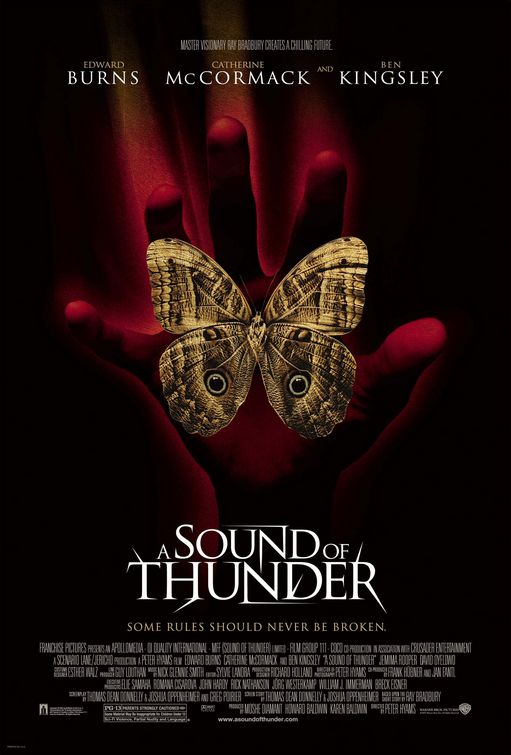 There have been some great dinosaur movies over the years. There have also been some unspeakably crappy dinosaur movies. (And I’m not just talking about the ones starring that purple bastard Barney.) You’d be hard-pressed to find a dinosaur movie more troubled than 2005’s A SOUND OF THUNDER, though. At one point, the film was intended to be something of a prestige blockbuster, based, as it was, on the classic Ray Bradbury short story. What actually hit theater screens was nothing short of a disaster. Behind-the-scenes problems doomed the movie to failure – and proved to be more interesting than the feature itself.

Set in the year 2055, the story centers around a company called Time Safari, Inc. Owned and operated by slick billionaire Charles Hatton (Ben Kingsley), the company offers wealthy customers the chance to go back in time and hunt dinosaurs. Actually, they only get to hunt one dinosaur, who was about to die anyway. Killing random dinos would alter the path of evolution, and so there are very strict rules against that. The rules are: Don’t change anything in the past, don’t leave anything behind, and don’t bring anything back with you.

Leading these expeditions is Travis Ryer (Edward Burns). Although he generally opposes the business end of Time Safari, association with the company does allow him to take partial DNA samples of extinct animals for his research. During an expedition, one of the clients accidentally breaks two of the three rules, causing serious repercussions. The earth suddenly begins experiencing daily “time waves” which change vegetation, atmosphere and, eventually, life forms. With the help of Dr. Sonia Rand (Catherine McCormack), the scientist who invented time travel technology, Ryer must figure out what happened, then correct it. His big plan seems to be going back in time to tackle the guy who caused the problem before he acts. That’s brainpower right there!

Originally, A SOUND OF THUNDER was to be directed by Renny Harlin, with Pierce Brosnan starring. Harlin reportedly had a serious disagreement with Bradbury, however, and was dismissed. Brosnan followed him. In need of a replacement director, the producers went with Peter Hyams, a filmmaker whose resume is largely comprised of what you could politely call “garbage,” including STAY TUNED, END OF DAYS, and THE MUSKETEER. (We’ll give him a tiny bit of credit for the Billy Crystal/Gregory Hines buddy-cop comedy RUNNING SCARED.) To replace Brosnan, they hired Burns, an indie auteur best known for writing, directing, and starring in low-budget romantic comedies like THE BROTHERS McMULLEN and SHE’S THE ONE. The tone of the production was already changing.

But staffing was the least of A SOUND OF THUNDER‘s problems. During filming in the Czech Republic, massive flooding heavily damaged the sets. Because of the time and labor needed to rebuild them, the decision was made to create sets via CGI instead. This led to further disaster. The major production company, Franchise Pictures, went bankrupt during post-production, no doubt due to their slate of expensive turkeys like DRIVEN, 3000 MILES TO GRACELAND, and, most notably, BATTLEFIELD: EARTH. Suddenly, the movie that was budgeted at $80 million had much, much less to work with. Shortcuts had to be taken in the visual FX department.

The end result of this problem is that the special effects look exactly like what you’d currently find in a cheesy SyFy channel flick. You can tell that the actors are often being filmed against a green screen, especially in the awkward sequences that feature “futuristic” cityscapes. It’s also painfully obvious that they’re walking on a treadmill in front of that green screen. The dinosaurs look rubbery and have none of the majesty or realism of those in JURASSIC PARK – a picture that came out twelve years prior to this one, by the way. When Travis and his groups go back in time, a large black hole opens up in the background, while a shimmery platform emerges for them to walk through the Styrofoam sets. The volcano in the background looks like it was made on someone’s PC, and to simulate the effect of its eruption, the camera shakes while the actors flop around, a la an old episode of STAR TREK.

If the visuals are terrible – and they most certainly are – the acting isn’t much better. Edward Burns is a likeable actor, but he looks uncomfortable in the action hero role. The script calls for him to go mano-a-mano with some of the mutated creatures that appear whenever a time wave hits. You can feel Burns’s awkwardness fighting with thin air, knowing that a creature will be put in via CGI later on. McCormack and Kingsley, classically trained theater actors, seem bewildered, too. On a side note, A SOUND OF THUNDER does offer a glimpse of David Oyelowo, nearly a decade before his breakthrough role in SELMA. We’re guessing he’d prefer you not be reminded of this fact.

Befitting of such a troubled movie, the release was an utter fiasco. Initially scheduled to open in April 2004, A SOUND OF THUNDER was bumped to August of that year, then September, then October. It missed every single one of those dates. After sitting in limbo for many months, it was again slotted for March 2005. It missed that date, as well. Warner Bros., knowing it had a catastrophe on its hands, quietly dropped the movie into just 816 theaters on Labor Day weekend (a notorious cinematic dumping ground), with almost no promotion or publicity. The only reason it went into theaters at all was that the studio had a legal obligation to release it. The total box office take was an embarrassing $1.9 million.

Even if it weren’t for the awkward performances and weak visuals, the screenplay would still likely have doomed the picture. It took three writers – Thomas Dean Donnelly, Joshua Oppenheimer, and Gregory Poirier – to adapt Bradbury’s tale, and they changed it radically, adding a lot of things that weren’t in the short story, presumably to make it hipper for contemporary audiences. They failed. The film tries hard to reach JURASSIC PARK levels of awesomeness, not realizing that it’s often unintentionally funny. That complete cluelessness admittedly gives it a bizarre, goofy appeal. You desperately want to heckle the film, but you can’t, because…Look, there’s a pack of marauding baboon-lizards! They think we’re actually going to be frightened by baboon-lizards! Isn’t that cute – they thought this was a good idea!

A SOUND OF THUNDER is a must-see for any fan of so-bad-they’re-amusing bombs. There are so many things wrong with it that a viewer can have a field day picking them all out. However, it is most fascinating as a case study of how a once-promising project can go off-track and evolve into a complete debacle.